An outbreak of bird flu in the UK last year killed five swans, five seals and a fox, a new report has revealed.

The fatalities, caused by a bird flu strain known as H5N8, were at an undisclosed wildlife rehabilitation centre, according to the government’s Animal and Plant Health Agency (APHA).

Infection in the seals was manifested as seizures, while the fox died overnight after sudden lack of appetite and malaise, and the swans were initially affected by a sudden onset of lethargy, the report says.

Prior to death, the H5N8 viral strain caused encephalitis – inflammation of the active tissues of the brain.

Last year, thousands of birds were euthanized to stop the spread of the disease, which mostly only impacts birds and can affect humans in rare cases. 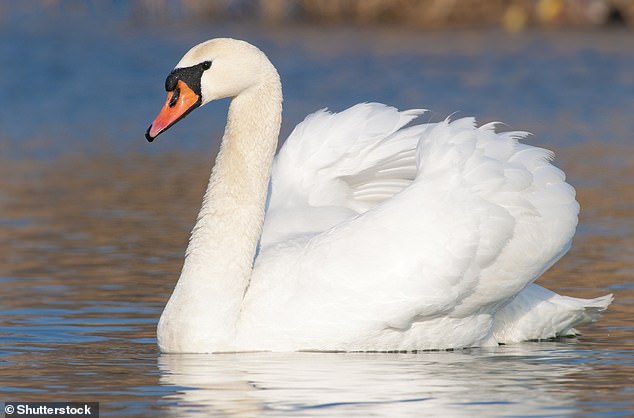 The outbreak began when five mute swans (Cygnus olor) were brought to the centre and held in isolation there between October 23 and November 20, 2020. Pictured, stock image of Cygnus olor

The results, based on postmortem swabs and tissue samples, was published on October 13 in the journal Emerging Infectious Diseases.

‘Live virus was isolated from the swans, seals, and the fox, and a single genetic change was detected as a potential adaptive mutation in the mammalian-derived viral sequences,’ the authors say in the paper.

‘Although genetic analyses indicated no increased risk for human infection with the H5N8 viruses in this outbreak, the investigation shows how these viruses may have unexpected and severe health risks for mammalian species.’

MailOnline has contacted APHA about the location of the wildlife rehabilitation centre where the infected animals were treated and died.

The outbreak began when five mute swans (Cygnus olor) were brought to the centre and held in isolation there between October 23 and November 20, 2020.

‘These birds were admitted for various reasons, including trauma and being underweight and weak,’ the authors say. ‘Infection with avian influenza viruses was not suspected at admission.’ 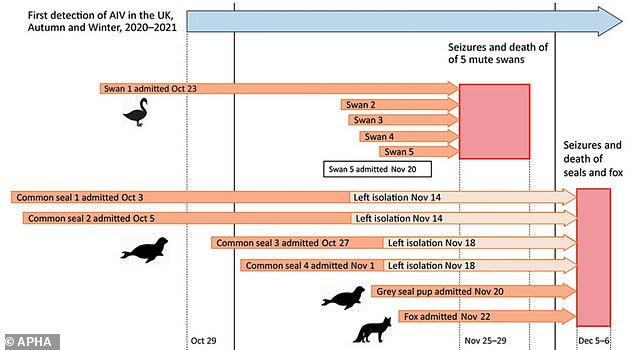 Timeline of the disease event. Encephalitis and death in wild mammals at a rehabilitation centre occurred after systemic infection with highly pathogenic avian influenza subtype H5N8

Each of the swans had been recovering until the sudden onset of lethargy and death or euthanasia during November 25 to 29.

Four of the five seals had been admitted to the centre between October 3 and November 1, but had left isolation by November 18 before dying in early December.

The fifth seal, a grey seal pup, was admitted on November 20 and died around the same time without leaving isolation.

The fox, meanwhile, was brought to the facility with large areas of alopecia and skin crusts over the body and limbs, consistent with mange (which is caused by mites). 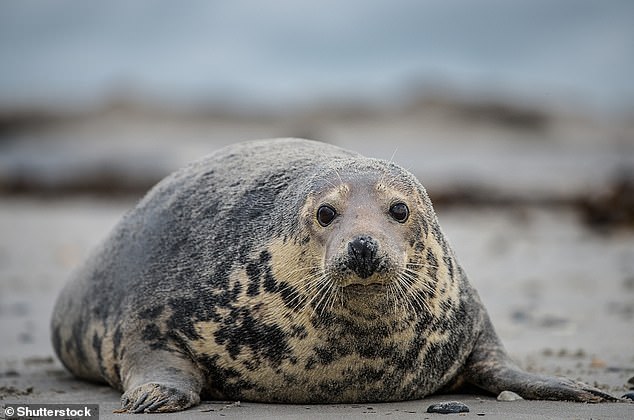 ‘It had been receiving treatment and was reported to be progressing well until the sudden onset of malaise and inappetence and was found dead the following morning,’ the authors say.

Analysis of whole-genome sequence data from the fox, seal, and swan samples demonstrated a 99.9 per cent similarity.

This means the swans were likely were the source of the infection for the other animals, reports Live Science.

The report shows ‘cross-species transmission can occur should conditions allow’, although the risk to humans remains low, according to another report that reviewed bird flu cases into 2021.

BIRD FLU: THE INFECTIOUS DISEASE THAT SPREADS AMONG AVIAN SPECIES BUT IS RARE IN HUMANS

Bird flu, or avian flu, is an infectious type of influenza that spreads among birds. In rare cases, it can affect humans.

There are lots of different strains of bird flu virus. Most of them don’t infect humans. But there are 4 strains that have caused concern in recent years:

Although H5N1, H7N9 and H5N6 don’t infect people easily and aren’t usually spread from human to human, several people have been infected around the world, leading to a number of deaths.

In February 2021 H5N8 was found to have infected a small number of people for the first time, in Russia.

No humans have been infected with H5N1, H7N9, H5N6 or H5N8 bird flu in the UK – this includes the type of H5N6 virus recently found in humans in China. Plans are in place to manage any suspected cases.

How bird flu spreads to humans

Bird flu is spread by close contact with an infected bird (dead or alive).

You can’t catch bird flu through eating fully cooked poultry or eggs, even in areas with an outbreak of bird flu.