Alex Salmond today announced that he is launching a political party to rival the SNP after his civil war with Nicola Sturgeon.

The former First Minister said Alba will be fielding candidates at the elections in May, saying he wanted to secure a ‘supermajority’ for Scottish independence.

The intervention risks causing problems for Ms Sturgeon, who is trying to use the vote as a platform for pushing to get another referendum as early as this year. 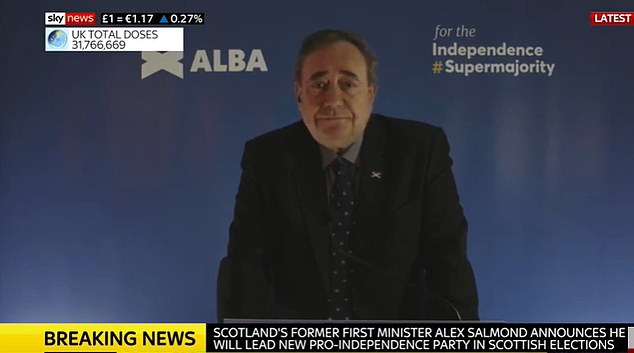 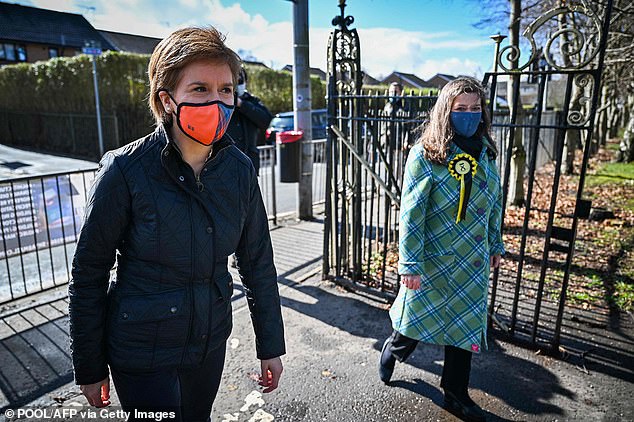 ‘I’m announcing the public launch of a new political force: the Alba Party,’ Mr Salmond said in a statement broadcast on Twitter.

‘Alba will contest the upcoming Scottish elections as a list-only party under my leadership, seeking to build a super majority for independence in the Scottish Parliament.’

Mr Salmond used the statement to introduce candidates for the May elections, including one who said they had defected from the SNP.

Earlier this week Mr Salmond announced he is taking the Scottish Government to court yet again in his first public statement since Ms Sturgeon survived two inquiries.

The former first minister accepted the verdicts of the parliamentary committee and Hamilton Inquiry – albeit hitting out at their ‘manifest limitations’.

But he railed that nobody had resigned over the Government’s botched harassment investigation into him, and singled out the country’s most senior civil servant.

He said he was now bringing legal action against the ‘conduct’ of permanent secretary Leslie Evans for her role in the handling of sexual harassment claims against him. He was awarded more than £500,000 in a judicial review and later cleared of allegations in a trial.

The Holyrood inquiry conducted by a committee of MSPs was highly critical of Ms Evans in its report published this week. She has defended her handing.

The report also accused the current First Minister of misleading Parliament in a potential breach of the ministerial code.

But Ms Sturgeon dismissed this verdict as ‘partisan’ and instead concentrated on the independent probe by James Hamilton QC, which ruled she did not break the code.

Ms Sturgeon was also cleared of claims made by Mr Salmond of orchestrating a concerted conspiracy to bring him down.