Alexas PenaVega’s two-year-old son, Kingston, had a small part of his finger severed during an accident on Friday, October 15.

‘While getting the kids ready for bed, I shut Kingston’s fingers in the hinge of the bathroom door,’ PenaVega, 33, revealed in the post. 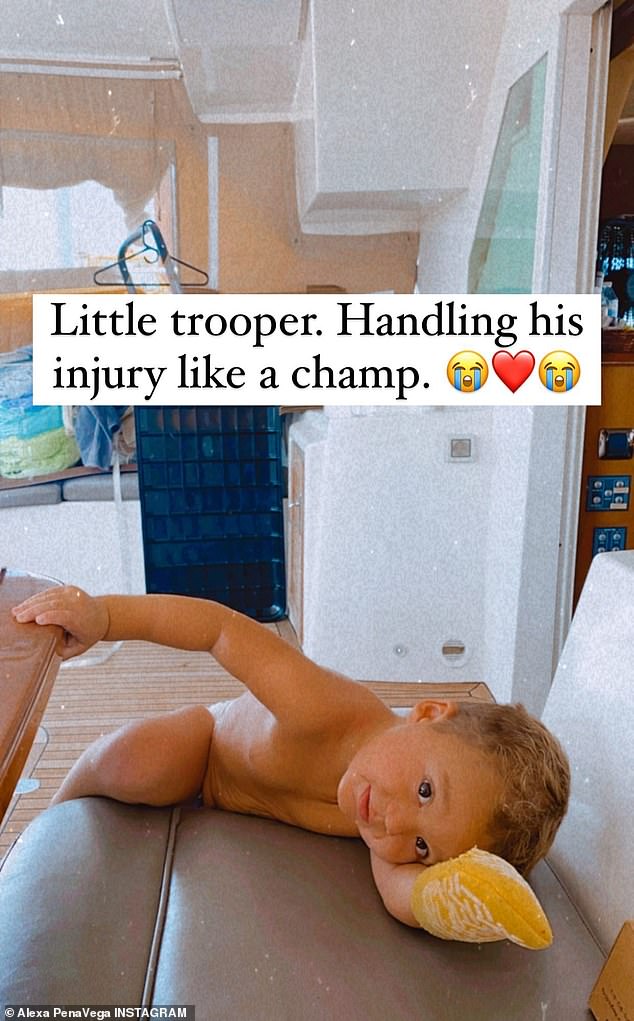 ‘Traumatic’ accident: Alexa PenaVega’s son Kingston, two, had the fingertip of his right middle finger severed when she accidentally shut a bathroom door on his fingers

The actress went on to share more about the extent of the injuries her little boy, whom she shares with husband, actor Carlos PenaVega, suffered during the mishap.

‘His first finger is bruised and a little bloody, but his middle finger took the brunt of it and was severed from the first knuckle near the tip,’ she wrote, before confessing, ‘It was the most traumatic thing we’ve had go through as a family.

‘The mom guilt and the shame was really hard to get through. But thank God for the sweet little bruiser Kingston is.’

The Florida native praised her husband with taking ‘amazing’ care of Kinston since he’s been on the mend. 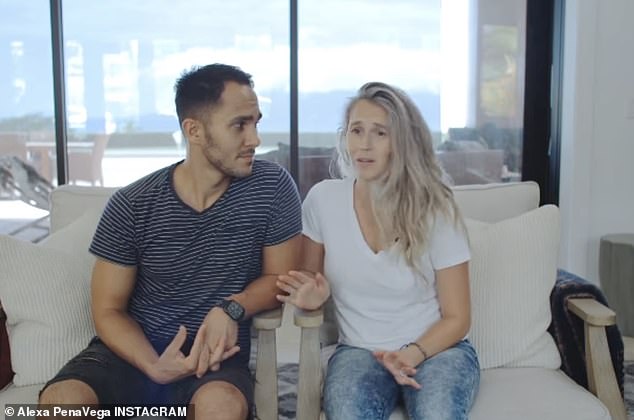 Upsetting: Alexa PenaVega said her son’s middle finger was severed from the first knuckle near the tip; she is seen alongside her husband, actor Carlos PenaVega 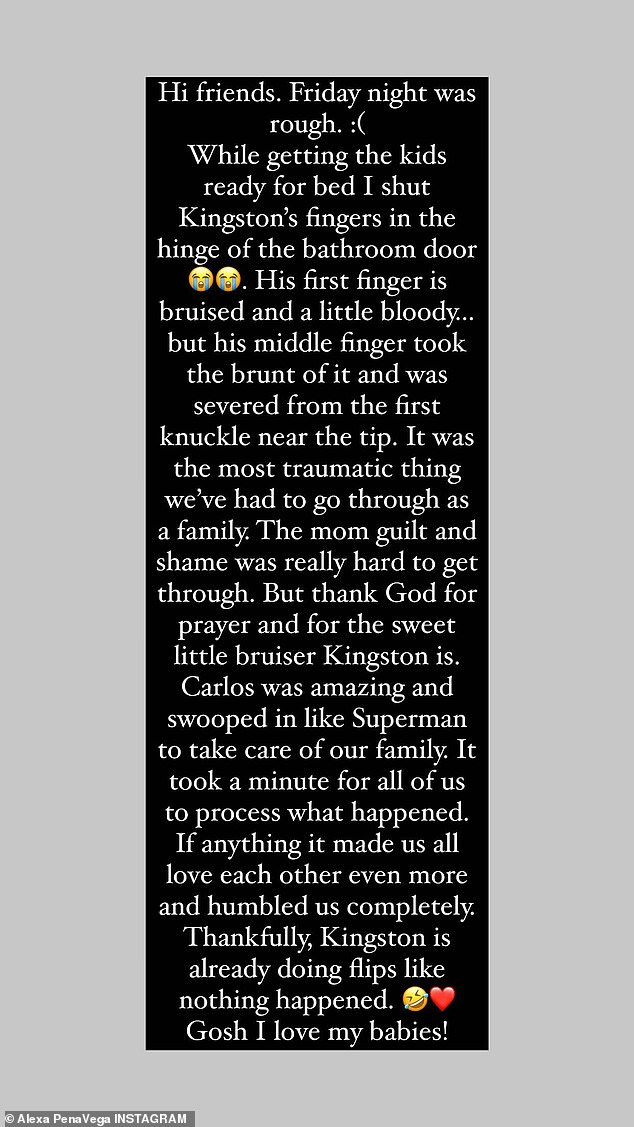 Guilt ridden: The actress confessed the ‘mom guilt and shame was really hard to get through’

‘[He] swooped in like Superman. It took a minute for all of us to process what happened. If anything, it made us all love each other even more and humbled us completely.

‘Thankfully, Kingston is already doing flips like nothing happened. Gosh, I love my babies.’

PenaVega followed up with another post and wrote, ‘Guilt and shame is not from God’ and that she has already ‘tossed that out the window’ and forgave herself.

She then shifted the praise to her ‘amazing friends and family lifting us up in prayer. So beyond thankful for everyone’s prayers.’ 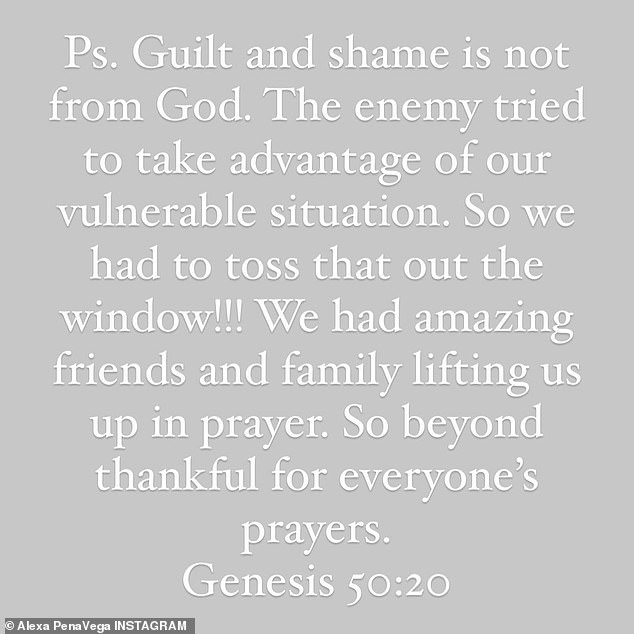 Gratitude: The Spy Kids star praised ‘friends and family for lifting us up in prayer’ 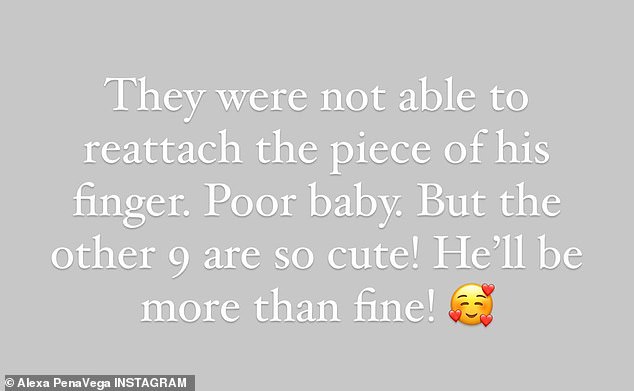 Unfortunate accident: Doctors were not able to reattach the piece of Kingston’s finger

In the end, doctors were not able to reattach the piece of Kingston’s finger, PenaVega wrote, while trying to keep a positive outlook.

‘Poor baby. But the other nine are so cute! He’ll be more than fine.’

In another post, the Ruby & the Rockits alum shared a photo of her brave boy with his left hand all wrapped up in bandages

‘Little trooper, Handling his injury like a champ, she wrote across the image.

Along with Kingston, the couple are also the proud parents to son Ocean, four, and daughter Rio, five months. 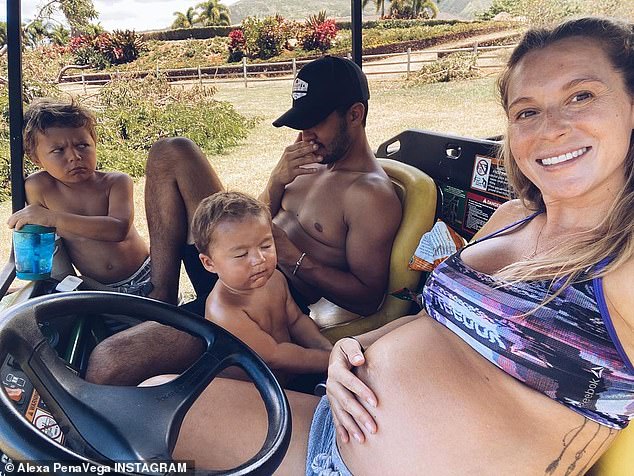 Family matters: Kingston also has an older brother Ocean (left) and a five month-old sister Rio, who was still in her mommy’s stomach when this photo was shot earlier this year 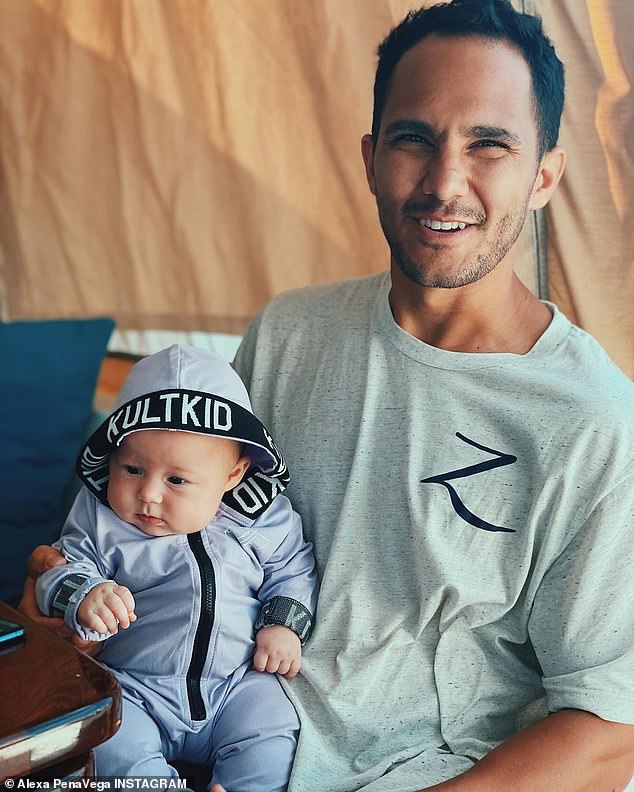 Growing family: The PenaVega’s welcomed the arrival of daughter Rio on May 7