‘It’s every woman’s nightmare’: Tearful Alice Evans says she considered harming herself after husband Ioan Gruffudd revealed he no longer loved her before filing for divorce


Alice Evans says she considered harming herself after husband Ioan Gruffudd abruptly ended their 14-year marriage, and admits she has a ‘very long and messy divorce’ ahead of her.

Evans, 53, confirmed her separation from the Welsh star in a series of furious tweets posted on Twitter in January, and has since documented every toxic turn in their subsequent divorce proceedings across social media.

But she insists she has no regrets in her willingness to share personal details regarding the nature of her relationship with Gruffudd, including their sex life, as she comes to terms with the collapse of their marriage. 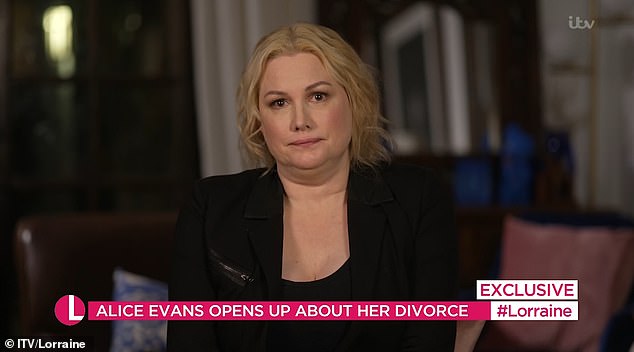 Appearing remotely on Thursday’s edition of Lorraine, the actress admitted she feared the worst when he returned to the family home in Los Angeles after filming his new show Harrow in Australia.

She said:  ‘He came back, hugged the kids, he very dryly gave me a kiss on the cheek and that was when I knew something was wrong.

She added: ‘He was here but he wouldn’t talk to me, slept in the spare room. I thought I might do myself harm… I tweeted he’s leaving us, and then all hell broke loose.’

Very tough, just wanted to thank you for having me on and let me speak about what I’ve been going through which is pretty much every woman’s nightmare. The reason I wanted to do ths is the amount of incredible feedback I’ve been through from women who’ve been through the same thing and haven’t been able to speak out. I was just completely unaware there were so many people who’ve gone through this exact same thing. No one really talks about this so I just thought, I’m going to be that person that does.