A new portable device and accompanying app can detect gonorrhoea in less than 15 minutes and determine if an infection will respond to frontline antibiotics, scientists in the US reveal.

The PROMPT system, developed by a team led by Johns Hopkins University, performs a polymerase chain reaction (PCR) test on swabs of bodily fluid and uses a Bluetooth connection to display results on a smartphone.

PROMPT improves on traditional testing in hospital laboratories and clinics, which typically takes up to a week to deliver results, by which point people with gonorrhoea may have unknowingly spread their infections.

Gonorrhoea is a sexually transmitted infection (STI) caused by bacteria called Neisseria gonorrhoeae – and can lead to infertility in men and women if untreated. 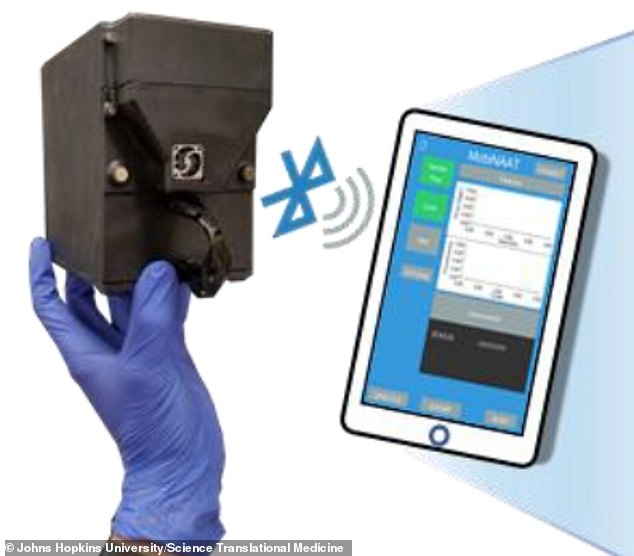 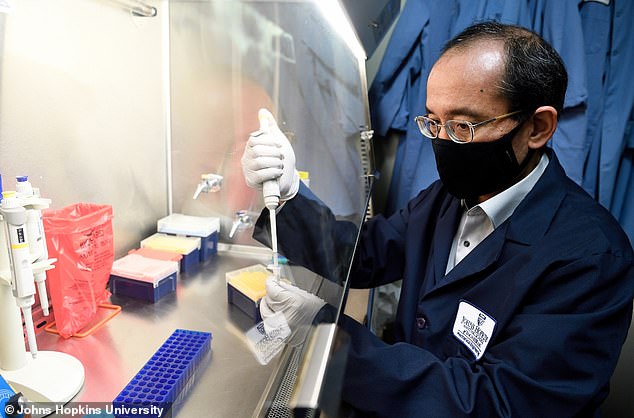 More people are catching gonorrhea in England and Wales than ever before, official figures revealed in September last year.

The researchers hope PROMPT will deliver results for people while they are still in the clinic.

‘Our portable, inexpensive testing platform has the potential to change the game when it comes to diagnosing and enabling rapid treatment of sexually transmitted infections,’ said team leader Tza-Huei Wang at the Institute for NanoBioTechnology at Johns Hopkins Whiting School of Engineering.

‘It ensures that patients are diagnosed on the spot, and treatment can begin immediately, improving clinical outcomes.

‘This will be especially valuable in low-resource settings, where well-equipped laboratories are not always available to every patient.’ 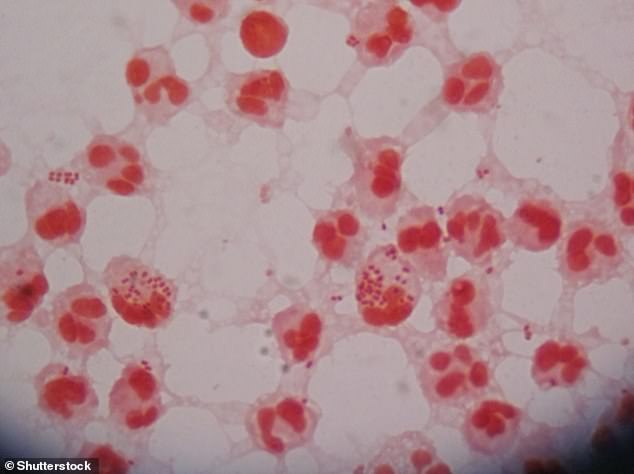 Pictured, gram stain for Neisseria gonorrhoeae, the species of bacteria that causes gonorrhoea

What are PCR tests and how do they work?

Polymerase chain reaction (PCR) tests involve a patient swabbing their nose and throat and can take up to three days to get results.

It works by amplifying tiny amounts of genetic material – namely the virus’s RNA.

Several substances – known as ‘reverse transcriptase’ and ‘DNA polymerase’ – are added to the sample.

They make copies of the tiny amounts of RNA present.

This makes it so there is enough of the Covid RNA to be picked up by a test.

‘Primers’ and ‘probes’ attach themselves to sections of the virus’s genetic code.

A signal is then sent out when genetic material has been found.

A swab containing a patient’s body fluid, including urine, is mixed with a solution of magnetic particles in a tube, and a drop of that blend is loaded into a cartridge, which snaps into the black, portable device, which is about the size as a small tissue box.

The device transfers the magnetized particles to reagents in the cartridge, which runs through 40 cycles of polymerase chain reaction (PCR) testing before displaying the results on the app.

PCR, used in Covid-19 testing, enables scientists to take tiny samples of DNA and amplify them to study in detail.

During testing from sexual health clinics in Baltimore and Kampala, Uganda, PROMPT correctly detected the most common strain of gonorrhea about 97 per cent of the time.

It was 100 per cent accurate in determining whether the tested strain of gonorrhea would respond to ciprofloxacin, a medication that targets infections that are resistant to other antibiotics.

‘We want these diagnostics to be available to all people who need it, when they need it.’

Wang and his team, who have published their research today in Science Translational Medicine, are forming a university spinoff to work through regulatory approval, manufacturing and distribution of the PROMPT system.

‘We expect to be able to deliver these products to those who can really benefit from them in two to three years,’ Wang said.

More than 87 million people around the world are infected with gonorrhea, which can can cause sterility and pregnancy complications in women, even leading to still-birth, if left untreated.

The Centers for Disease Control and Prevention (CDC) cite super-gonorrhea as one of the top five most urgent threats to human health. 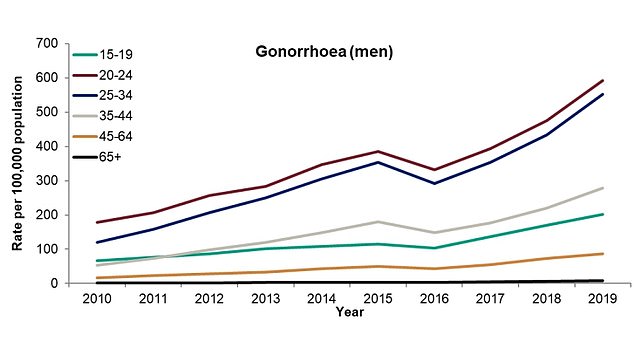 More people are catching gonorrhea in England and Wales than ever before, official figures revealed in September 2020. Pictured, cases in men by age bracket 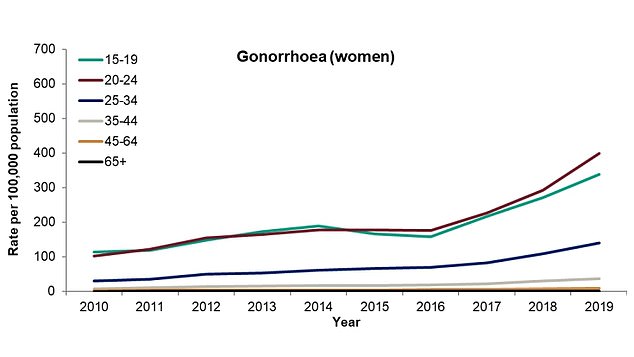 So quickly identifying and treating those infected is the only way to prevent spiraling numbers of cases and the further rise of antibiotic-resistant strains.

Earlier this year, another team of researchers, including experts from Penn State University and a company called Microbiotix, revealed they’d found a drug that wipes out super gonorrhoea – and could one day be given to infected humans.

After just one oral dose of the new drug, 80 per cent of the mice were completely free of the the infection in less than a week.

The other 20 per cent of the test animals had dramatically lower levels of the bacteria in their systems after six days.

‘With a single dose therapy, a patient could complete the treatment during a visit to their health provider.’

WHAT DO WE KNOW ABOUT GONORRHOEA?

Discovery of the infection and its cause

Gonorrhoea is a sexually transmitted infection that has been known to mankind since medieval times. It was referred to as the ‘clap’ before the actual cause was discovered.

The exact time when gonorrhea started cannot be ascertained. Earliest records of the disease are found from 1161 when the English parliament enacted a law to ensure that the spread of the infection is decreased and curbed.

This shows the magnitude of the public health problem this infection had posed then. However, even then the cause of the infection was unknown.

This was followed by a similar law in 1256 in France during the reign of Louis IX.

The symptoms of the infection were observed when the crusaders lay siege of Acre.

After the Pope Boniface secularised the practice of medicine, the doctors began to treat common men as well as prostitutes for this infection.

In 1879 Neisser discovered the gonococcus or Neisseria gonorrhoeae and it was soon proven to be the causative agent of gonorrhoea.

He demonstrated its presence consistently in patients with symptoms.

In addition, when discharge and cultures of gonococci was introduced into the urethra of healthy men, it caused the disease.

Gonorrhoea was referred to as the clap, and still is colloquially.

According to some historians the name came about because the infected person would experience a clapping sensation that appeared suddenly when urinating.

Others say that the name originated because in order to remove the pus-like discharge from the penis, the penis had to be clapped on both sides.

Still others believe that the name comes from French brothels, which were known as les clapiers, and men who visited these brothels invariably ended up with the infection.

The earliest treatment of gonorrhea was with the use of mercury. Earliest findings from English warship ‘Mary Rose’ show that several special surgical tools were used to inject mercury via the urinary opening.

In the 19th century, gonorrhea was treated with the help of silver nitrate.

Silver nitrate was soon discontinued and instead protargol was used which was a type of colloidal silver sold by Bayer from the year 1887.

Around 1859 another treatment was popular. These were cubebs, an Indonesian variety of pepper of which the dried powdered unripe fruit was used, and balsam of copaiba (or copaiva), which was extracted from a South American tree.

The indication of their effectiveness was cessation of the discharge.

In the 1890s the first vaccine prepared from killed gonococci taken from Neisser’s laboratory. This vaccine was introduced in 1909.

Before antibiotics came into being metals were tried against the infection this included arsenic, antimony, bismuth, gold etc.

The use of other drugs for treatment continued right until the 1940s till antibiotics – notably Penicillin – came into use. Other antibiotics that arose during this time were the sulphur compounds or Sulphanilamide, Sulfapyridine and sulfathiazol.

Penicillins continued to be mainstay of therapy until 1970’s. In 1980 the first gonococcus isolates were identified that were resistant to penicillin. In 1983 a local epidemic caused by a penicillin resistant strain occurred in North Carolina. Patients were successfully treated with spectinomycin.