Apple could be getting ready to launch a more rugged version of its popular Apple Watch to appeal to hardcore athletes.

The ‘Explorer Edition,’ as it’s been dubbed, would have a more durable rubberized frame and extra impact-resistance to hold up in ‘extreme environments,’ Bloomberg reported.

That could be useful for skiing, mountain climbing and other intense activities, allowing the device to compete with more rugged smartwatches like the Garmin Fenix 6, Casio WSD-F30 and Samsung Galaxy Watch 3.

More than 100 million people around the world already own an Apple Watch, with the device responsible for the bulk of the $30 billion Apple made in wearables and accessories last year.

The new watch, positioned as an alternate not a replacement for the standard Apple Watch, would roll out later in 2021 or 2022 at the earliest, the outlet said. 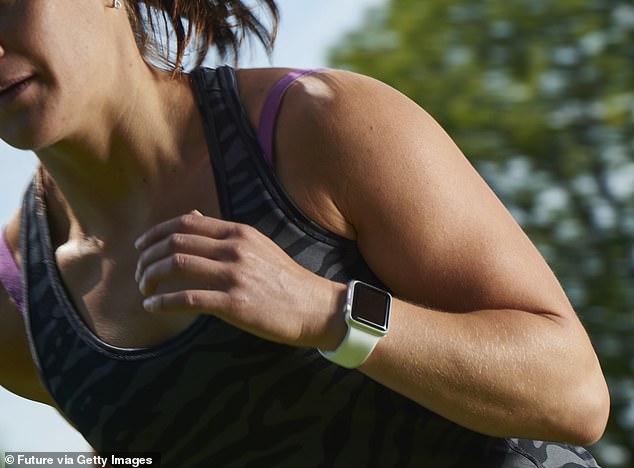 Apple is considering a more rugged version of the Apple Watch to appeal to ‘extreme athletes,’ with a rubberized frame and better impact absorption

Apple considered a more rugged version of its Apple Watch when it first launched the wearable in 2015, Bloomberg reported, but never released a product to consumers.

A year later, the Cupertino-based company partnered with Nike on a co-branded wearable aimed at runners.

But the rumored Explorer Edition would hold up better in more intense activities, like skiing and snowboarding, which the traditional Apple Watch isn’t considered durable enough for.

The rumored ‘Explorer Edition’ Apple Watch could be launched later this year or early 2022. Pictured: An Apple Watch Series 6

It would have the same functionality as a regular Apple Watch, but have a rubberized frame and stronger impact resistance, Bloomberg reported.

The ‘extreme’ Apple Watch could be released later this year or early 2022, It’s by no means a sure thing: It could also ultimately be delayed or even canceled, sources told Bloomberg.

The company is also working on new swim-tracking features for the Apple Watch, the report stated.

Rumors had circulated Apple was going to announce several new devices at a March 23 unveiling event, including AirPods 3, an iPad Pro update and the long-awaited AirTags tracking device.

Those reports, based on a leak by a ‘mysterious but spot-on’ Chinese hacker named Kang, proved false but cnet predicted the tech giant could be saving its big news for April.

Whether that event happens—or if it includes news of a new Apple Watch—remains to be seen.

The company tends to unveil new iterations of the Apple Watch in the latter part of the year, often in September.

The company has continually upgraded its smartwatches since launching them in April 2015.

Launched in September 2016, the Apple Watch Series 2 included a partnership with Nike and allowed swimmers to count their laps and analyze their stroke style.

Apple could soon have some competition in the smartwatch field, though: Facebook is rumored to be working on an Android-based version that will focus on messaging and health features.

According to The Information, the social media giant is ‘far along’ with the development and could release the device next year – with a second–generation as soon as 2023.

The report claims the smartwatch will let users send and receive messages, track workouts and connect with health and fitness companies.

According to The Information, Facebook is designing its own operating system, but it is not yet clear if the software will power the wearable device or the firm will opt in to use Google’s Wear OS.

The device will support standalone connectivity and allow the device to connect to the services or hardware of health and fitness companies, such as Peloton exercise bikes.

England: Jude Bellingham is wowing Germany with his cool head and tough tackling for Dortmund