Manchester City women will have to venture into unchartered territory if they are to keep their Champions League dream alive.

A humbling 3-0 defeat by Barcelona means Gareth Taylor’s side face an uphill battle to make the semi-finals. No team has ever progressed to the next round after losing the first leg of a knockout game by three goals.

Barca have not conceded more than one goal in a game since they were beaten in the final of this competition by Lyon in 2019 and it will take an almighty comeback from City to prevent a possible re-run of that game in the semis. 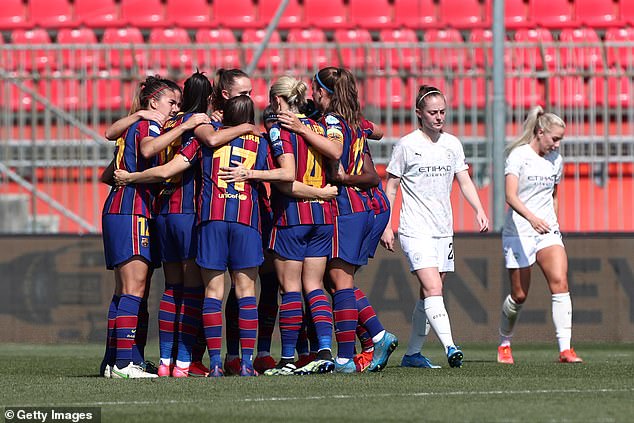 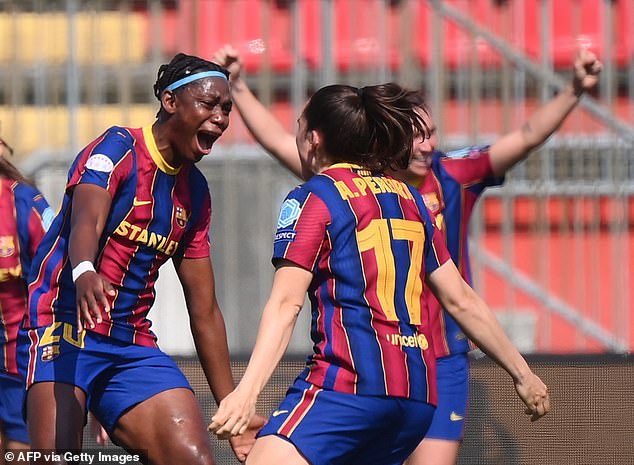 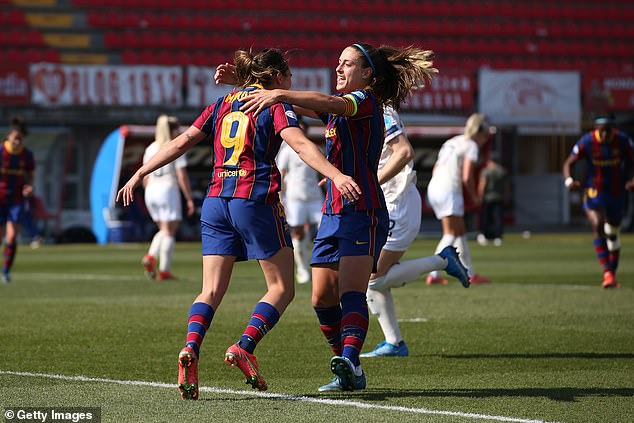 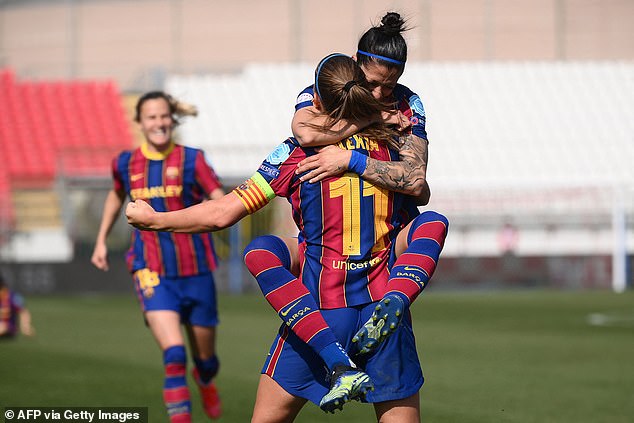 When asked about the difficulty of scoring three against Barca in the return leg next week, Taylor insisted his side are more than capable.

‘It’s still half-time, we’re capable of scoring that amount of goals to get us through. That’s what we’ll be working on building up to next week’s game.’

The absence of captain Steph Houghton proved to be crucial with City’s defence looking unusually frantic from the first whistle. 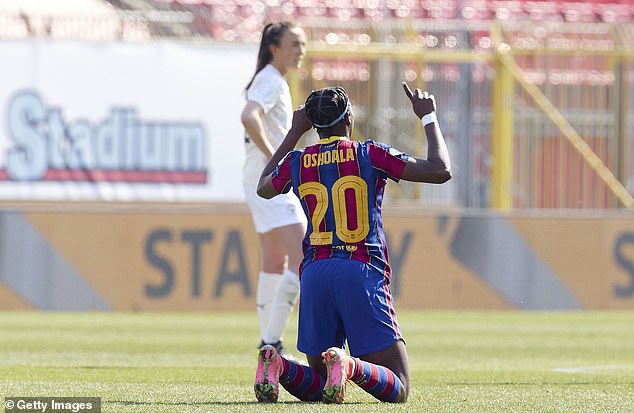 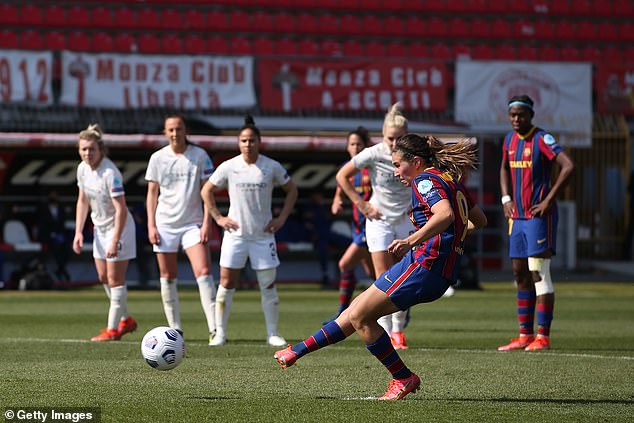 Barca have scored 99 goals in the league and they could have had three or four inside the opening 20 minutes.

City goalkeeper was Ellie Roebuck responsible for keeping the score at 0-0, first saving with her feet to deny Oshoala before making a point-blank stop to keep out Aitana Bonmati’s effort from inside the box.

The England international then made another save, palming Caldentey’s long-range shot round the post.

But Roebuck could do nothing to prevent the opening goal in the 35th minute as Barca finally made their dominance count.

City failed to clear their lines from a set piece with the ball falling to Oshoala on the edge of the box. The striker’s first-time shot flew into the bottom left corner to give the hosts the lead they deserved.

City had the ball in the net just before half-time when Sam Mewis met Alex Greenwood’s free-kick but her goal was correctly ruled out for offside. 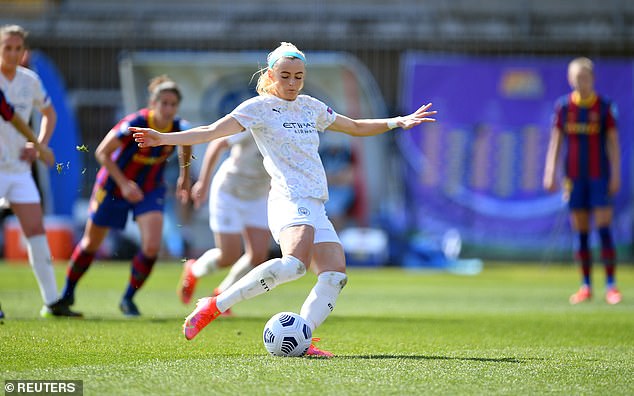 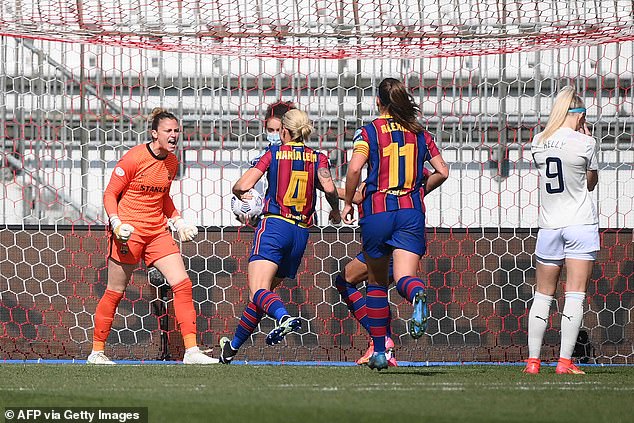 It got worse for the visitors after the break when Barca were awarded a penalty in the 51st minute.

Demi Stokes, brought on at half-time, initially made a good tackle to block Hansen’s shot but then caught Oshoala as she tried clear the ball. Referee Tess Olofsson pointed to the spot and Caldenty stepped up to convert into the top right corner.

City were given a penalty of their own three minutes later when Hemp was brought down by Mapi Leon but Chloe Kelly saw her effort saved by Sandra Panos.

The winger has scored three times from the spot since signing from Everton in the summer but her shot was too central and Panos was able to push it over the bar.

Taylor admitted frustration that his team had not been able to make the most of the few chances they created and said the penalty miss was a big moment. 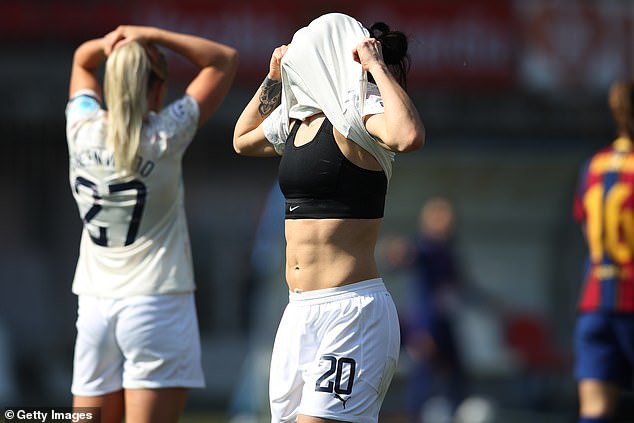 ‘Scoring at any time would have changed the complexion,’ Taylor said.

‘The away goals are really important, that (the penalty) was a good opportunity but Chloe has done great for us this season, she’s scored penalties for us and she’ll score them for us in the future.’

Mewis should have scored the all-important away goal in the 70th minute when she was picked out by Georiga Stanway in the box but the midfielder got her finish all wrong and dragged her shot wide.

City were made to pay for their missed chances as subsitute Jennifer Hermoso made it 3-0 in the 86th minute, finishing into an empty net after Alexia’s shot came back off the post.