BBC podcast presenter Deborah James, who has stage four bowel cancer, has revealed how she was rushed to A&E after experiencing ‘spiking 40 degree temperatures’ on Tuesday.

The former deputy head teacher and cancer campaigner, 40, from London, headed to A&E in the early hours of the morning after suffering from a fever and dehydration.

Sharing a snap to Instagram where she can be seen in laying in a hospital bed attached to a drip delivering intravenous medicine and fluids, she penned: ‘Not how I want to start a Wednesday! Had to go to A&E, was spiking 40 degree temperatures and was so dehydrated from not being able to keep anything in me!’

The mother-of-two continued: ‘Have spent the last 8 hours being pumped full of antibiotics and fluids – lots of fluids! Feeling better already! Hope this is a fly by visit!’ 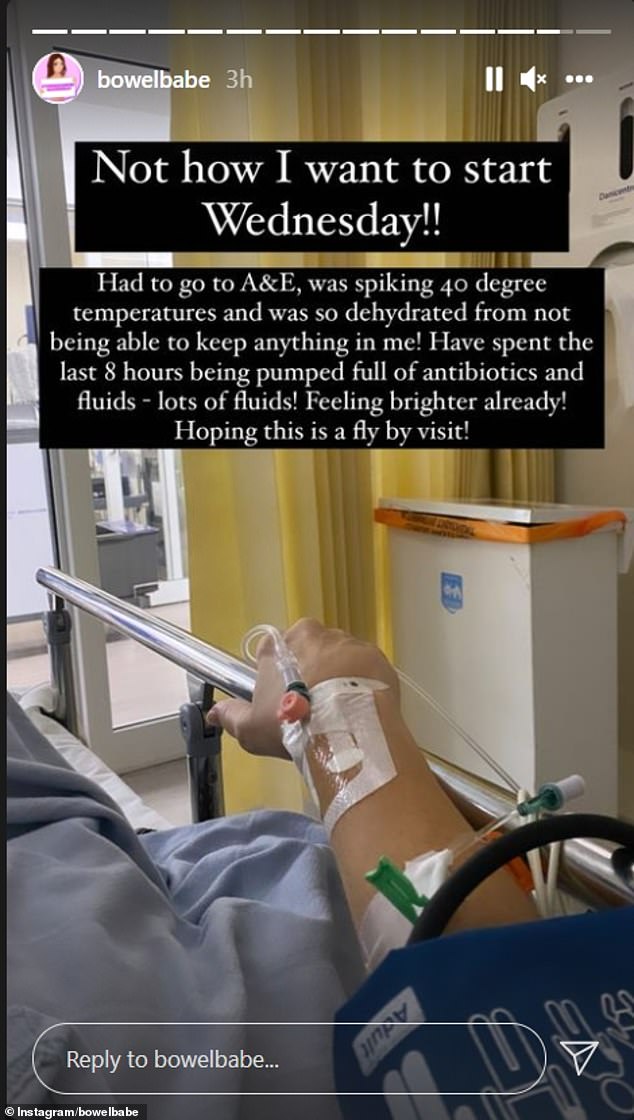 BBC podcast presenter Deborah James, 40, who has stage four bowel cancer, has revealed how she was rushed to A&E after experiencing ‘spiking 40 degree temperatures’ on Tuesday (pictured) 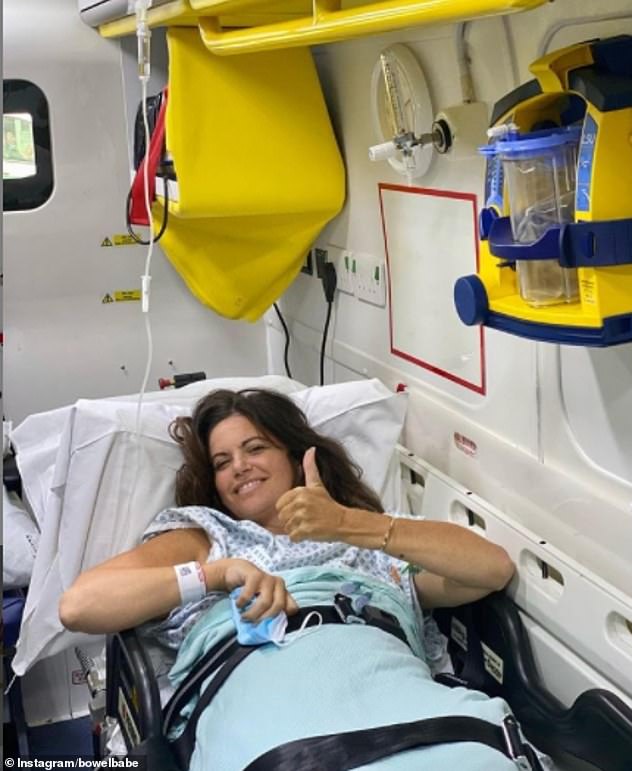 Deborah has been living with stage four bowel cancer since she was diagnosed in December 2016, and was told early on that she might not live beyond five years.

Earlier this summer, she was told she had an aggressive new tumour near her liver that had wrapped itself around her bile duct – requiring a life-saving stay in hospital.

In her recent post, Deborah went on to explain how she was ‘gutted’ to be back in hospital because she was meant to be on a train to Manchester, where she had planned to attend the launch of an event she’s spent 18 months working on.

She noted the event – Cancer Revolution: Science, Innovation and Hope – will run from this Friday until March next year at the Science and Industry Museum. 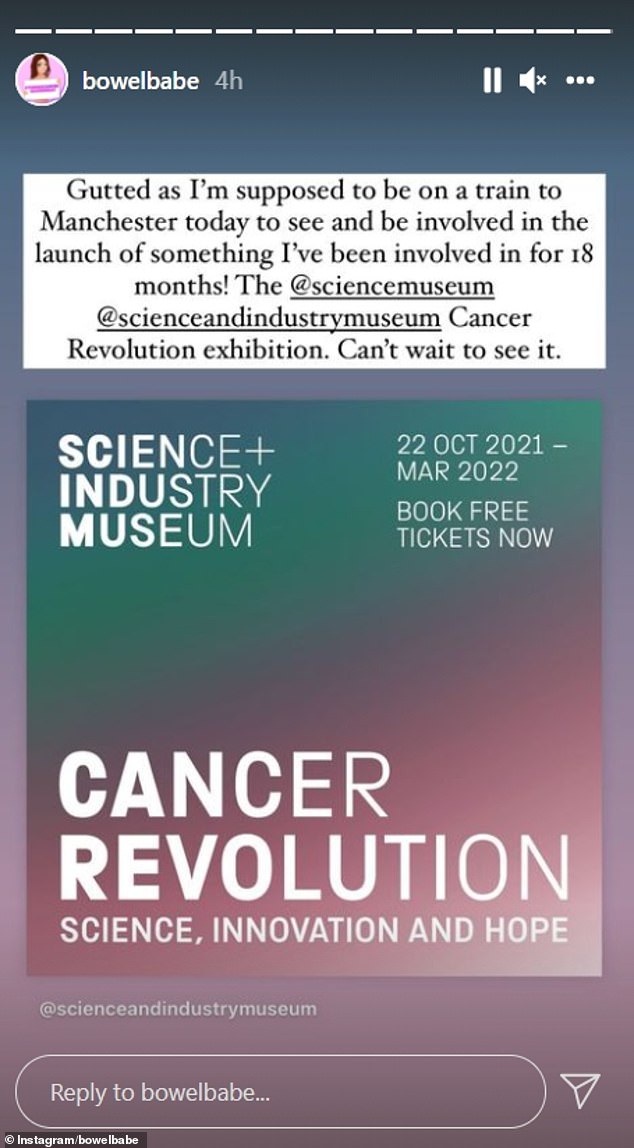 In her recent post, Deborah went on to explain how she was ‘gutted’ to be back in hospital because she was meant to be on a train to Manchester, where she had planned to attend the launch of an event she’s spent 18 months working on (pictured)

Bowel, or colorectal, cancer affects the large bowel, which is made up of the colon and rectum.

Most cases have no clear cause, however, people are more at risk if they:

More than nine out of 10 people with stage one bowel cancer survive five years or more after their diagnosis.

This drops significantly if it is diagnosed in later stages.

According to Bowel Cancer UK figures, more than 41,200 people are diagnosed with bowel cancer every year in the UK.

It affects around 40 per 100,000 adults per year in the US, according to the National Cancer Institute.

The exhibition offers the public the opportunity to explore the science behind cancer care.

The Instagram post comes just hours after Deborah was seen modelling various active wear outfits for her followers – and two days after she revealed her chemotherapy is working.

The podcast host, who admitted she has suffered the ‘hardest three months’ of her life, posted on social media over the weekend and indicated her battle with the disease had turned a corner, revealing: ‘MY CHEMO IS WORKING!  Words, I wanted to hear, but didn’t allow myself to think might happen.’

She continued: ‘I think I’ve been preparing for the worst actually. I have to say waiting for these scan results has been incredibly hard. In my head I’ve gone to hell and back.

‘These are the first scans since my previous drugs stopped working, my liver packed up, and I got sepsis.

‘We started me back on what was my first line ‘nuclear chemo’ and it’s fair to say it’s floored me.

‘Despite the snippets of smiles and glam dresses I choose to share here (because they are the moments in my day that make me smile), behind closed doors this has been the hardest 3 months since my diagnosis physically (and mentally).’

She revealed doctors have said she is ‘stable’, adding: ‘ Essentially the cancer that was rapidly growing and causing my liver to fail, has been halted at least temporarily.

‘And my lymnodes are even shrinking! Am I cured? No. Will I ever be – No. Do I still have active cancer – sadly yes.

‘But this buys me more time. At least until my next scan!’

Adding she is ‘on her knees’ after having intensive chemotherapy for years, she said: ‘I’m of course over the moon by this news, and know how close I am to have receiving the other side of the coin.

‘But it hasn’t really sunk in because I’ve had my head down the loo for the last 3 days due to chemo and been asleep minus the fleeting windows of prancing you might see!’ 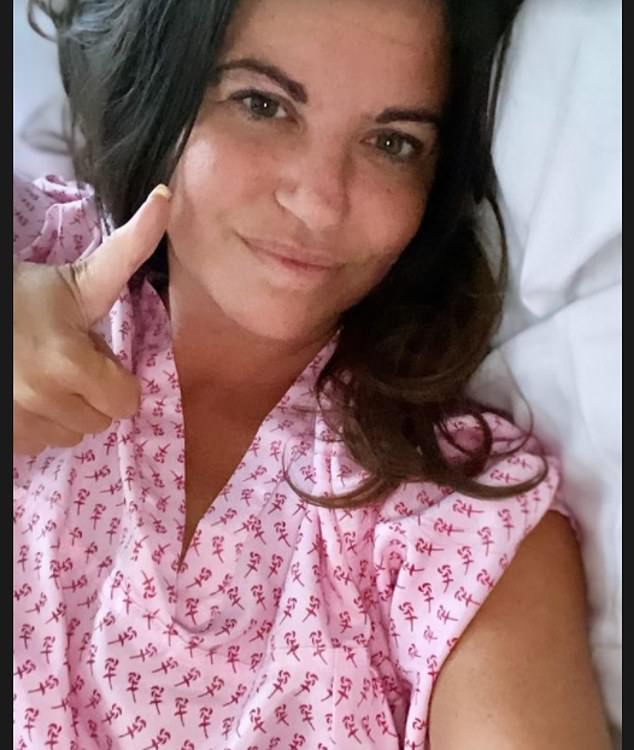 Earlier this summer, she was told she had an aggressive new tumour near her liver that had wrapped itself around her bile duct – requiring a life-saving stay in hospital 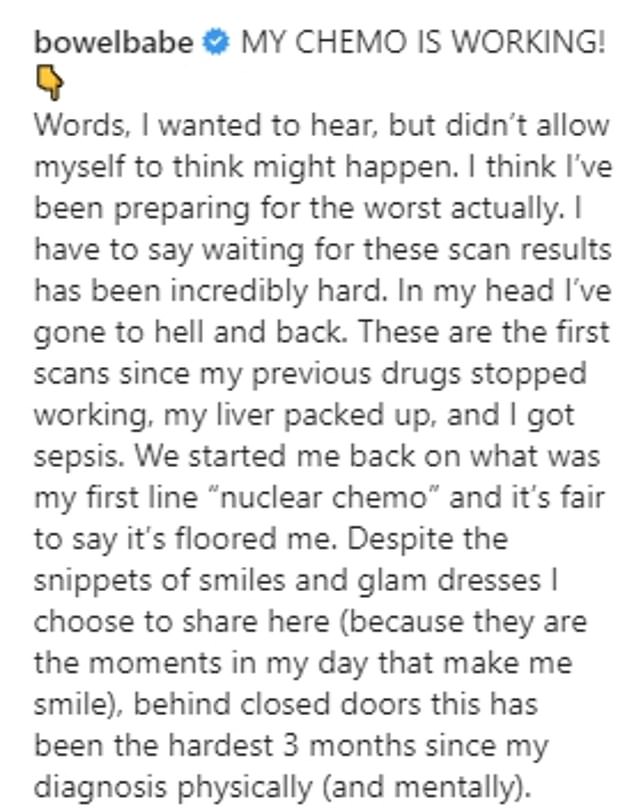 In an emotional Instagram post shared two days ago by the podcast host, she said she had felt ‘floored’ by

She finished the post by writing: ‘But cheers to the blessing of another day, another chance, more options, and more life I didn’t think I’d see! One day at a time!’

Weeks earlier, Deborah celebrated her 40th birthday after fearing it was a milestone she would never see.

Posting on Instagram, she wrote she had initially planned a ‘low key’ dinner and dance party for her closest friends and family last week, adding: ‘I’m still blown away by reaching 40, but I really wasn’t sure if I’d cope with anything too crazy.’

Snaps shared on Deborah’s social media showed her house decorated with a huge array of balloons, with her friends and family sitting down for a candle-lit dinner before the party.

Later she shared clips as she performed a speech which she said she had ‘written in the bathroom on her phone’ before the event. 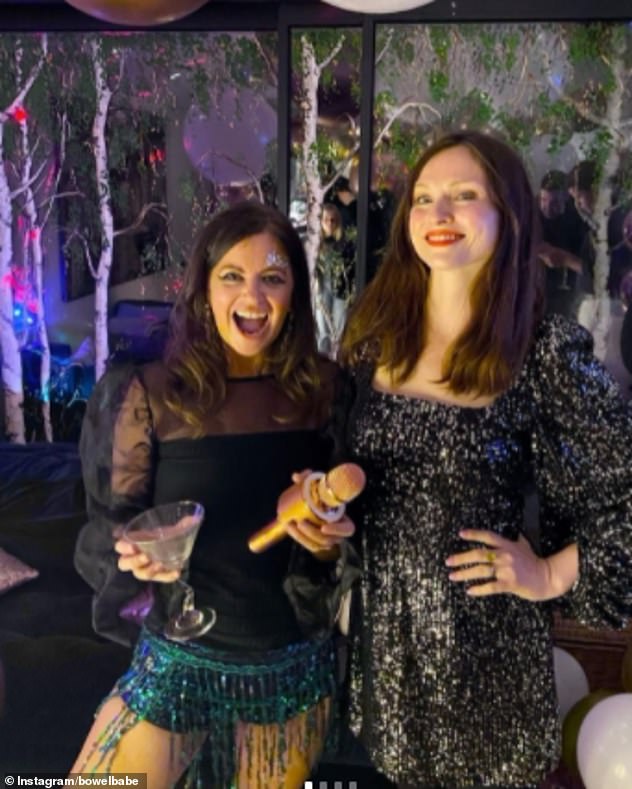 BBC podcast presenter Deborah James, who has stage four bowel cancer, has shared snaps from her wild 40th birthday party after fearing it was a milestone she would never see (pictured left, with popstar Sophie Ellis-Bextor who performed at the event) 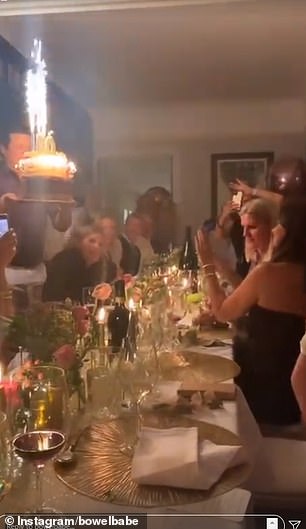 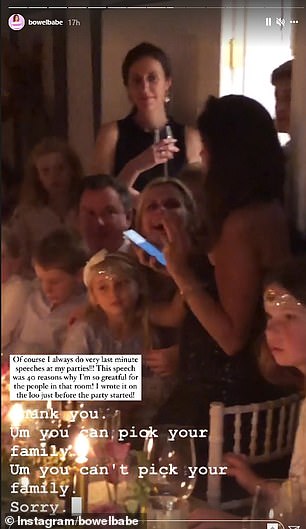 Snaps shared on Deborah’s social media showed her house decorated with a huge array of balloons, with her friends and family sitting down for a candle-lit dinner before the party

She said: ‘It’s not putting the blame back, I’ve personally beaten myself up about regretting not getting to the GP earlier.’

Sarah passed away on September 5th, just 13 months after confirming her terminal cancer diagnosis. Her death was announced by her devastated family on social media.

Speaking about Sarah’s death, James said it was ‘hard-hitting’, adding: ‘It’s not just breast cancer, it’s knowing our body and understanding the difference between early and late diagnosis.

‘It’s tragic it takes these kind of headlines to remind us that none of us are exempt from the one in two of us who will get cancer in our lifetime.

In 2018, Deborah (left) joined Lauren Mahon (front) and Rachael Bland (right) to present the award-winning podcast You, Me and the Big C on Radio 5 Live. Bland tragically died of breast cancer on September 5th that year; her husband Steve Bland now co-presents the show

Last week, Deborah told followers on Instagram ‘By my general lack of being on here (dancing!), that Things have moved (in the wrong direction) very quickly cancer wise.’ Pictured: Deborah James undergoing a scan at the Royal Marsden Hospital in London