Ben Affleck was spotted spending a bit of quality time with his daughters, Violet and Seraphina, and his son, Samuel, as they headed to a restaurant in Brentwood on Tuesday evening.

The 49-year-old actor appeared to be beaming with pride as his eldest child, 15, drove the family’s car to the eatery while he guided her from the passenger seat.

Ben co-parents his children with his former wife, Jennifer Garner, whom he divorced in 2018. 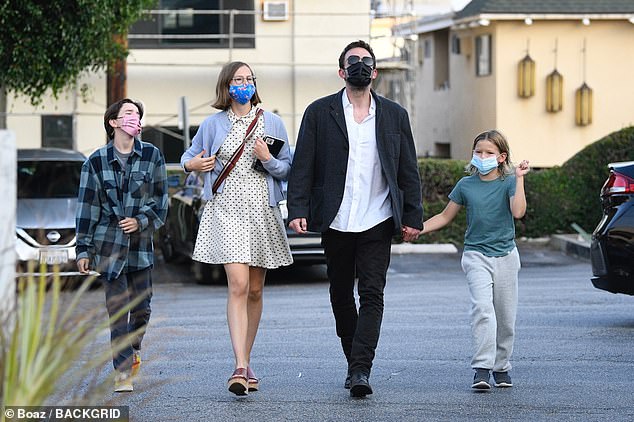 Doting dad: Ben Affleck was seen taking his three children out for dinner in Brentwood on Tuesday evening

Affleck kept it casual during the outing, as he wore a white button-up shirt underneath a dark gray jacket.

The Argo director and star also sported a pair of slim-fitting black pants and a set of matching shoes, and he donned sunglasses for part of the outing.

The performer and his three children all wore facial coverings to keep themselves protected from COVID-19 while they spent time in public.

At one point, the actor was seen kissing the side of Violet’s head through his mask after she successfully parked.

In Los Angeles, a 15-year-old can being their training to learn how to drive by applying for a learner’s permit, which means they can take to the road under the supervision of a licenced driver. 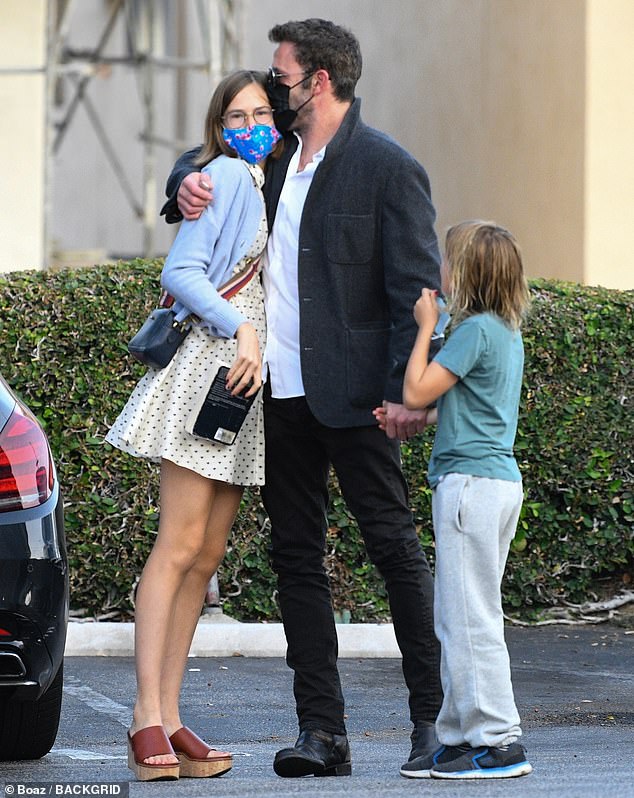 Could not be prouder: The Argo director was seen kissing his eldest child on the side of her head after she drove the family to the restaurant 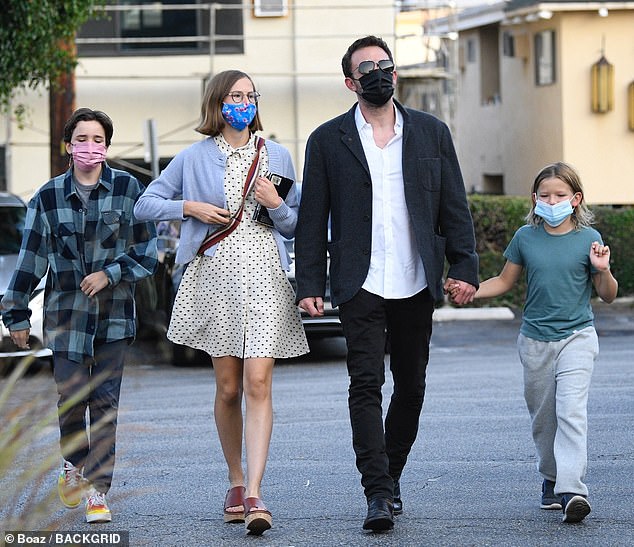 Taking precaution: The actor and his children all wore facial coverings to keep themselves protected from COVID-19 during their outing

Affleck and Garner, 49, initially met while working on the 2001 feature Pearl Harbor, in which they co-starred.

The pair later began a relationship in 2004, and their connection was highly reported during the early days of their time together.

They eventually tied the knot the following year during an intimate wedding ceremony that was held in Turks and Caicos. 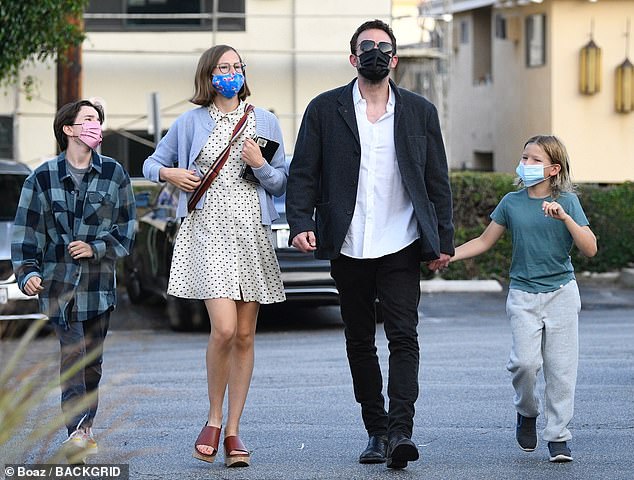 Former couple: Affleck shares his children with his ex-wife, Jennifer Garner, whom he married in 2005

Affleck and Garner quickly started a family when they added Violet, aged 15, to their lives that December.

The happy pair went on to welcome Seraphina Rose, aged 11, into their household three years later.

The performers added Samuel, aged nine, to their family in February of 2012.

However, the former couple shocked many when they announced that they had separated three years later, and they formally dissolved their union in 2018. 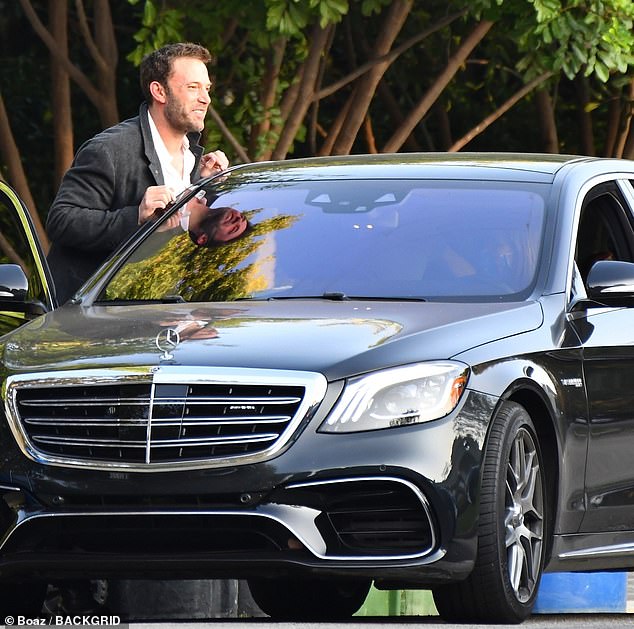 Calling it quits: Affleck and Garner remained together for over a decade before they formally dissolved their union in 2018

Affleck and Garner currently remain on good terms, and the actor has spoken lovingly about his ex-wife on several occasions since their split.

The current pair previously maintained a high-profile relationship in the early 2000s and planned to tie the knot at one point, although they called off the ceremony days before it was set to occur and split up in 2004.

The 52-year-old hitmaker later became married to Marc Anthony, and the two welcomed a set of twins in 2008, although they split up in 2011. 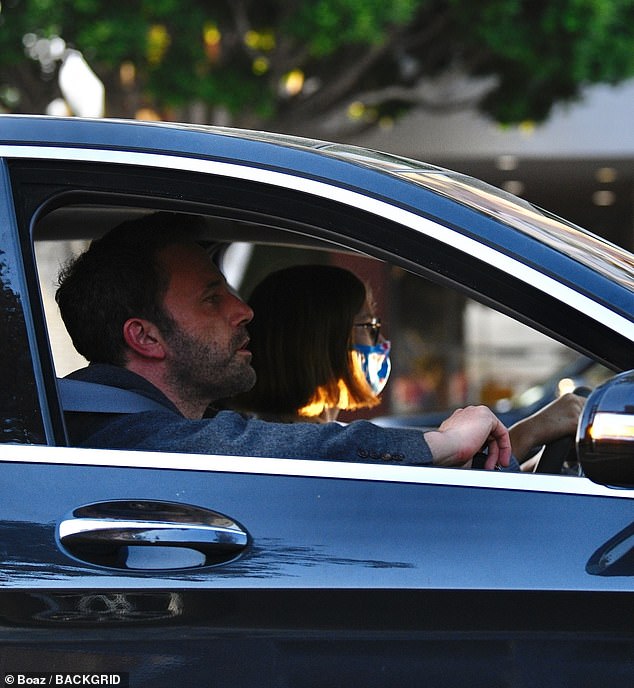 Reconciliation: Following his split from the mother of his children, Affleck resumed his romance with Jennifer Lopez, whom he previously planned to marry

She was reported to have resumed her relationship with Affleck this past spring, and they confirmed that they had reconciled in July.

A source spoke to Entertainment Tonight last month and told the media outlet that Affleck and Lopez were enjoying themselves while having their respective children spent time with each other.

‘It’s been fun for them to do activities as a blended family and the kids are enjoying getting to know each other better,’ they said. 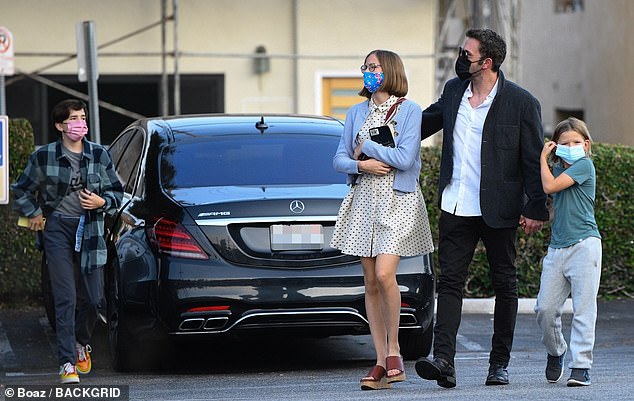 Fast friends: A source recently spoke to Entertainment Tonight and expressed that the pair’s respective ‘kids are enjoying getting to know each other better’

The insider also expressed that the two were looking to bring their respective children together in the near future.

They described the two as ‘hands-on parents and their kids are their number one priority, so it’s important for them to do things as a unit that make their families happy…their goal is to be one big happy family.’

The source also expressed that, during a recent trip to Hollywood’s Magic Castle, the performers and their kids were able to have a little bit of bonding time. 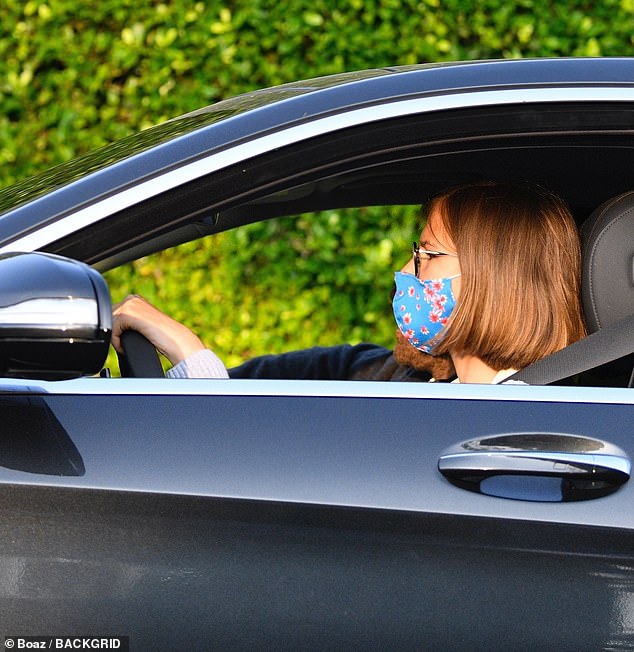 Looking to the future: They also remarked that the couple’s ‘goal is to be one big happy family’

‘Everyone seemed to enjoy themselves, especially the children. The whole group seemed like a happy family who were having a good time,’ they noted.

The insider also pointed out that the entertainment industry figures were thoroughly enjoying themselves while exploring their resumed relationship.

‘Jen and Ben are all about their kids and they are having so much fun together as a big family. Everyone is getting along great and things are really working out for them on so many levels,’ they stated. 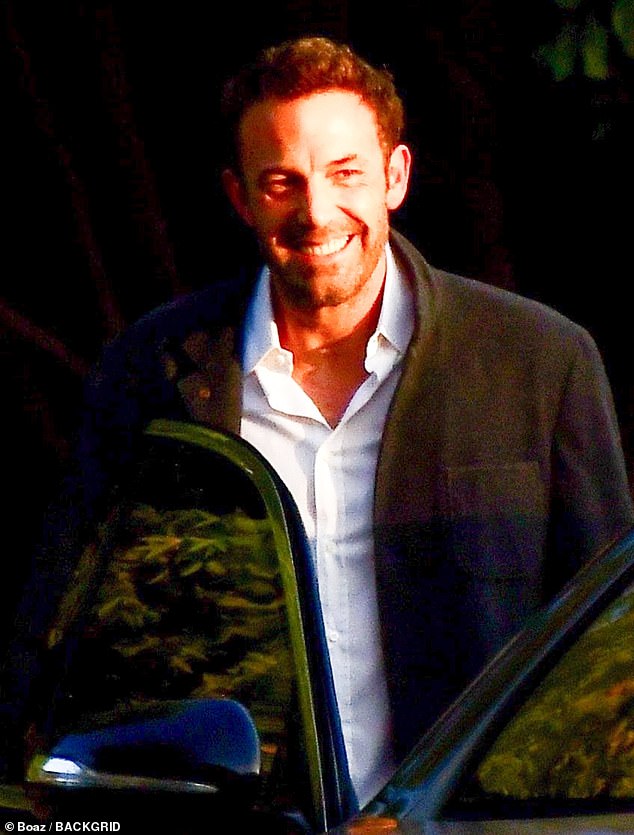 Going well: The insider also expressed that, when Affleck and Lopez took their kids out to Hollywood’s Magic Castle, they ‘seemed like a happy family who were having a good time’