The small band of British coaches who voyage to the tennis world’s more remote outposts with their young charges have needed to catch their breath recently.

For among the fellow travellers they have been mixing with, around the furthermost reaches of the junior circuit, has been one of the great icons of the game, Bjorn Borg.

He was there earlier this month in Brazil and the Dominican Republic, watching his 17 year-old son Leo take on some of GB’s best prospects. The Swedish legend was also around late last year at a tournament in the Egyptian resort of Sharm El Sheikh. 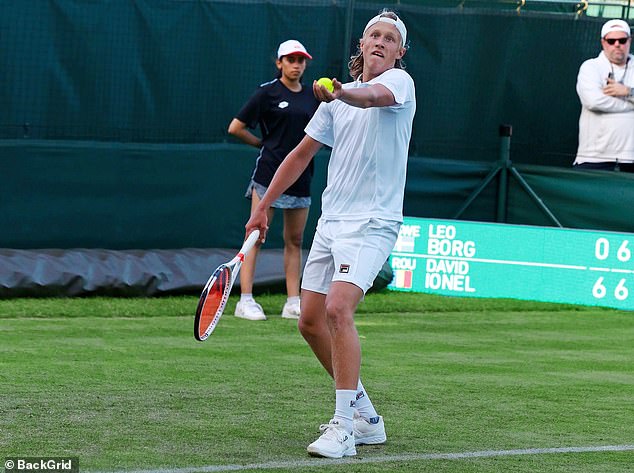 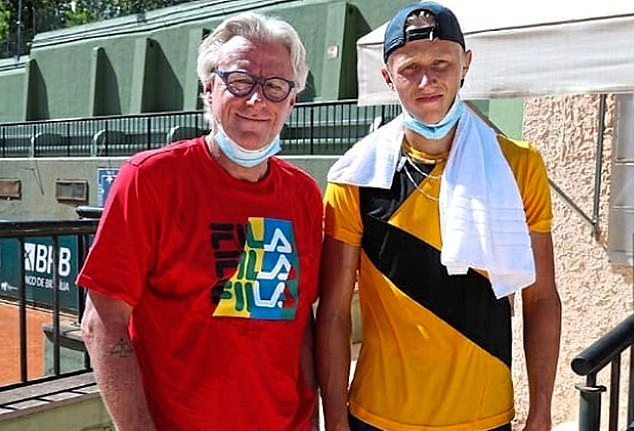 Having fallen in and out of love with tennis during his sometimes turbulent life Borg, now 64, is being seen an increasing amount on the fringes of the sport he once dominated.

This is because Leo is beginning in earnest his professional career, which takes two major steps this coming fortnight. This week he has been given a wildcard into a Challenger level event at the Puerte Romano club in Marbella.

Next week, by the same means, he will play in the qualifying for what will be his first tournament on the main ATP circuit, at the same venue. Bjorn will be in attendance, and has agreed to hand out the trophy.

Two weeks ago, in the Dominican capital of Santo Domingo, the British contingent were at first startled to see the phlegmatic, flowing-haired Borg sitting in the courtside bleachers among the handful of locals and tourists who attend such events.

“He keeps quite a low profile and doesn’t show any emotion when he is watching but he is very pleasant and down-to-earth when you talk to him,” said GB coach and former player Jack Carpenter. 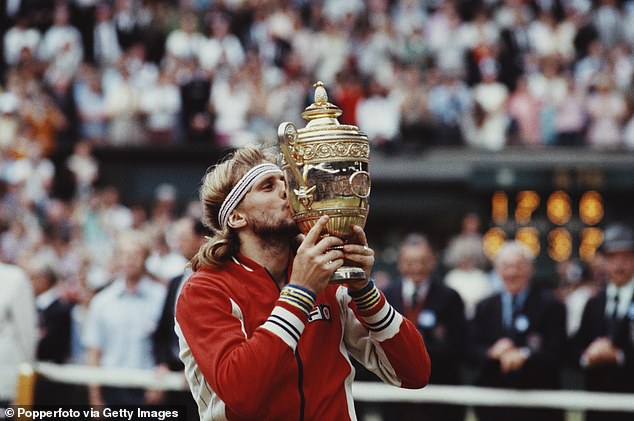 “I’ve got a tattoo of the Three Lions on me, and he came up and had a chat about how Sweden are England’s bogey team at football. When people recognise him he is very polite with them and happy to have selfies taken. I think it took the players a bit of time to adjust to having someone like that watching their matches but they got used to it.”

At the Santo Domingo event Leo faced three British youngsters, narrowly beating two of them before losing in the final 6-1 6-3 to Bournemouth’s Jack Pinnington-Jones, a fellow 17 year-old who is one of our more highly rated prospects.

Prior to that Leo had just won an international Grade 1 event in Porto Allegre, Brazil, the top level on the circuit. He is now ranked the number 12 junior in the world.

Off the back of that he has been given the wildcards for Marbella, although there is no doubt that having one of the most famous names in the game helps.

It is, of course, a double-edged sword, given the expectation it brings. Someone like Gary Nicklaus, son of golfing great Jack, could probably attest to that after his relatively modest career on the PGA Tour. 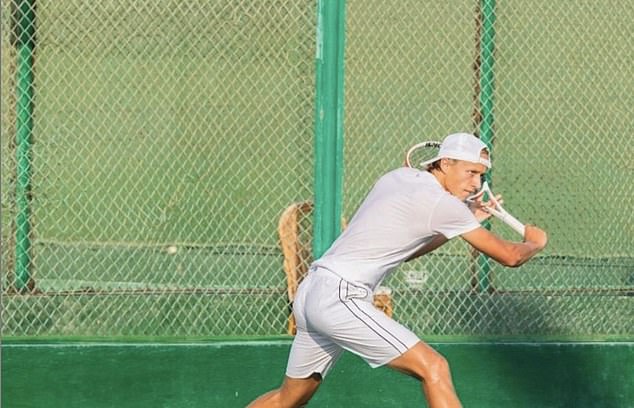 Leo has a physical resemblance to his father, but also has a similar play style to the icon

Leo is the son of Borg and his third wife Patricia Ostfeldt, and his notoriety will only be added to by the physical resemblance to his father. They even play in a similar way with a particularly recognisable backhand a feature of his baseline game. Wearing the same FILA brand of clothing adds to the effect.

When Hollywood made a movie about Bjorn’s greatest rivalry – 2017’s Borg Vs McEnroe – Leo anonymously answered an advert for a child to play the young Bjorn. Unsurprisingly got the part when they saw him.

The name has already opened a few doors. At Wimbledon 2019 he was given a wildcard into the qualifying rounds for the junior event, losing in the first round.

There is said to have been a heated discussion behind the scenes at the All England Club about it being handed out, with debate about whether he merited it. Clearly he has improved since.

Leo insists he is not overwhelmed by walking in his father’s sneakers: “I am getting there and people are judging me more on my tennis and not simply focusing on me being Bjorn Borg’s son,” he told itftennis.com this week. 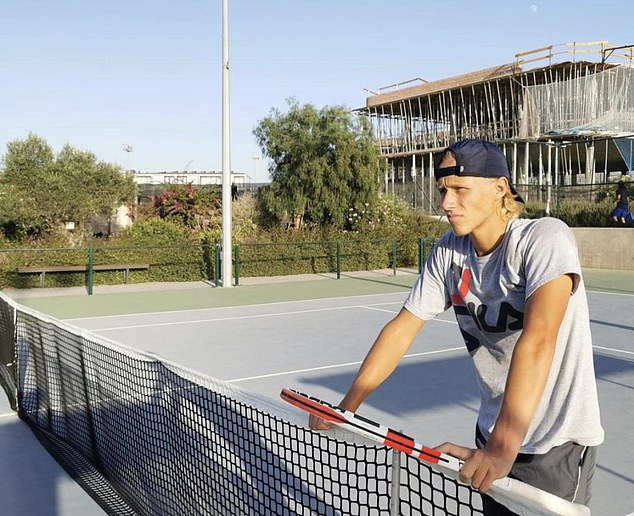 “I’m trying to get to the top and my game has come a long way. Before, they were possibly just comparing me to my dad. I didn’t care about it because that’s normal to do, but now I think people are recognising me more and not necessarily seeing my dad.

“I know it’s going to follow me all my life, so it’s no big deal for me and it’s something I have to deal with. I have never thought about it too much.”

Bjorn is also mindful of the comparisons. “He’s always going to be reminded of me, and that’s kind of a burden for him,” he told the New York Times. “So I don’t put pressure on him, and I try to make sure that the life he lives doesn’t give him any pressure. That’s our way of helping him. Then, the only person who can put pressure on him is himself.”

The 64 year-old’s involvement with tennis has been sporadic since his abrupt retirement at 26, although he has resurfaced in recent years as captain of Team Europe in the Roger Federer-inspired Laver Cup contest versus a Rest of the World outfit. 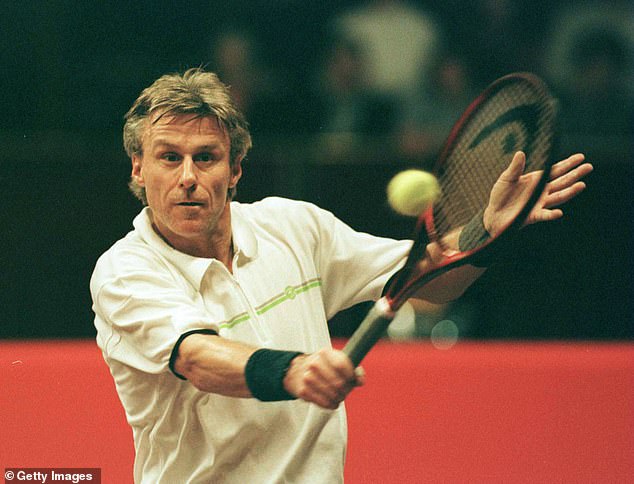 Now he is coming full circle again through the simple pleasure of a father nurturing his son.

His return to Marbella this week coincides almost exactly with the 30th anniversary of his extraordinary comeback aged 34 at the Monte Carlo Open with a wooden racket.

At the time he was married to flamboyant Italian singer Loredana Berte and beset by financial problems, following his withdrawal from the sport after winning eleven Grand Slam titles. His attempts at competing with outdated equipment were not successful and he soon retreated back into the shadows.

Those who have watched Borg Jr., who has spent time training at the Rafael Nadal Academy in Mallorca, describe him as a solid baseliner and strong athlete, promising without showing signs of exceptional ability.

There are relatively few precedents for parent and child combinations in tennis, although current world number 32 Taylor Fritz is the son of Kathy May, French and US Open quarter finalist in the late Seventies. You can only wish young Leo, freighted with such a heritage, the best of luck.