Boris Johnson revealed that he has already booked a visit to the pub for when coronavirus restrictions ease but hinted that he might wait for a haircut – despite saying he ‘badly’ needs one.

The Prime Minister echoed the thoughts of the nation as he admitted a trip to the hairdressers was overdue – with salons and barbers forced to close during England’s current coronavirus lockdown.

During a visit to a nursery in Greenford, west London, on Thursday, Mr Johnson told broadcasters: ‘I need to get a haircut soon, I do need a haircut.

‘I do badly need a haircut but it’s going to happen.’

Asked if his fiancée Carrie Symonds could have a go at trimming his unruly tresses he said: ‘Yes, she’s going to have another go at it.’

He was then asked if he had booked a hair appointment for April 12, the Prime Minister said: ‘For the pub? Yes. For the haircut? I don’t know about that.’

Hairdressers in London have been shut since before Christmas but, under the Government’s road map for easing lockdown measures, are set to reopen on April 12. 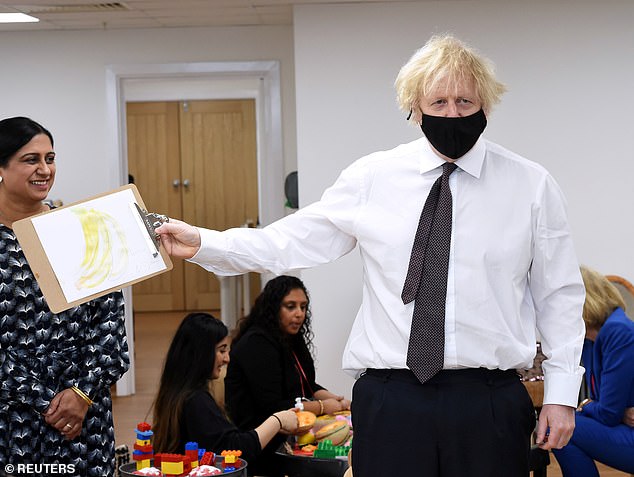 During a visit to a nursery in Greenford, west London, on Thursday, (pictured) Mr Johnson hinted that he might wait for a haircut – despite saying he ‘badly’ needs one

Outdoor hospitality venues, such as beer gardens, are also permitted to serve customers from this date – with Mr Johnson suggesting he will prioritise a visit to the pub over getting his famous blond mop trimmed.

In the next stage of the road map, two households, or groups of up to six people, will be allowed to mix indoors and limited crowds will be allowed at sporting events from May 17.

All remaining restrictions on social contact could be lifted from June 21, allowing for larger events to go ahead and nightclubs to reopen.