The Low Earth Orbit (LEO) broadband constellation, backed by the Government to provide “global” Internet coverage, declared itself “financially secure” earlier this month. It comes after the tech company, based in London, raised the $2.4billion (£1.73billion) funding necessary to roll out the remaining 650 satellites in its constellation. The team have now set their sights on completing their global coverage, but the 254 probes already launched are enough to start offering a commercial service to the Northern Hemisphere.

The company has signed a Memorandum of Understanding (MoU) with BT to explore the possibility of improving digital communication services in some of the hardest to reach parts of the UK.

And OneWeb’s CEO, Neil Masterson, believes Britons should be excited.

He said: “What we have now is an indigenous British space industry that can lead to next-generation satellite development and give the graduates of our many universities a real career opportunity in Britain.

“We’re not going to lose them abroad to others, but rather we’ll keep them here. 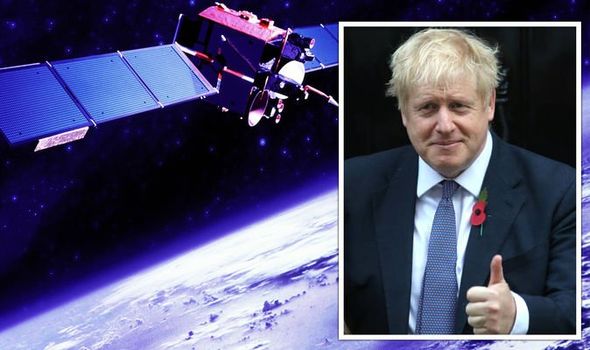 The UK is at the centre of a huge space project (Image: GETTY)

BT are in talks with OneWeb (Image: GETTY)

“As we’ve seen in the pharma industry, that’s good for our future [economy in Britain].”

The New Delhi-based telecoms company has since invested a further $500million (£362million).

It comes after Paris-based Eutelsat also declared a $550million (£400million) investment, a move which is said to have angered some in Brussels.

Bharti will be the company’s largest shareholder with a 38.6 percent stake, while the Government, Eutelsat, and Japan’s Softbank will each hold 19.3 percent.

And Mr Masterson says there could be more to come.

He added: “We may raise a bit more, but essentially what we need to do the job we now have.

“It’s a tremendous vote of confidence in the team, it’s a vindication of, frankly, the Government and Bharti’s first investment.”

The company will now start mapping out plans to cover the whole of the globe in a move that will put them in direct competition with Elon Musk’s Starlink, which now has more than 1,500 satellites in orbit.

Mr Masterson told MailOnline: “If you’re in the middle of northern Alaska, we will be able to provide the same connectivity, the same speed, low latency, the same feel, as people have in New York City.

“In the UK, there are obviously locations that do not have the same connectivity as others.

“We can dramatically narrow that gap, which opens up opportunities from an educational perspective, from a healthcare perspective, and it just opens up the digital economy.

“What this means is that you don’t have to be in a conurbation to be able to contribute to, or take the benefits from, that digital economy.”

It comes after the EU chucked the UK out of its Galileo programme.

The Global Navigation Satellite System (GNSS) goes live in 2026, and will feature a Public Regulated Service (PRS) that can be used by government agencies, armed forces and emergency services.

OneWeb will provide a global service in the future (Image: GETTY)

It came after the EU decided this “crucial feature” would only be accessible for bloc members, despite the UK playing a decisive part in its development.

Currently, Britain is relying on America’s GPS system, and Chair of the Parliamentary Space Committee, David Morris, believes that the relationship will deepen.

He told Express.co.uk: “We have been talking with the US for some time about encompassing GPS.

“It’s only a matter of time before it starts amalgamating because our allies are in NATO.

“We are now in a position to drive our own agenda.”