Britain is set to sizzle on hottest March day since 1968: Mini-heatwave will send temperatures soaring to 75F as nation enjoys new found freedoms… but prepare for Easter chill

By Rory Tingle and Amie Gordon For Mailonline

Britain could see the hottest March temperature for more than 50 years today – as temperatures rocket in time for the easing of lockdown restrictions.

Across the south, temperatures are expected to reach 24C (75F) today and Wednesday, as warm as the Spanish holiday isle of Majorca.

But forecasters also predict the mercury to nudge a degree higher in corners of the South East on Tuesday, which would make it only the second March day since records began in 1884 when temperatures have exceeded 23C in the UK.

The warmer weather follows a blustery and wet weekend for many and coincides with the end to the ‘stay at home’ order in the latest stage of the roadmap out of lockdown.

In Wales, lockdown restrictions were eased as the ‘stay local’ requirement was dropped on Saturday, with people allowed to stay in self-contained holiday accommodation. 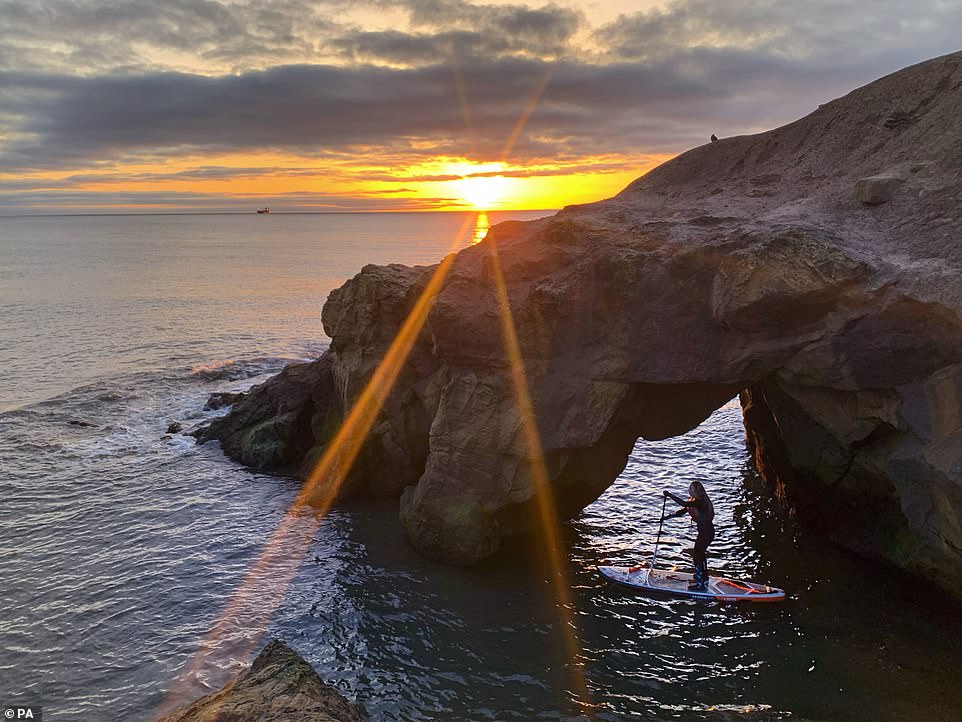 Anna Heslop, 25, paddleboarding during sunrise at Cullercoats Bay on the North East coast 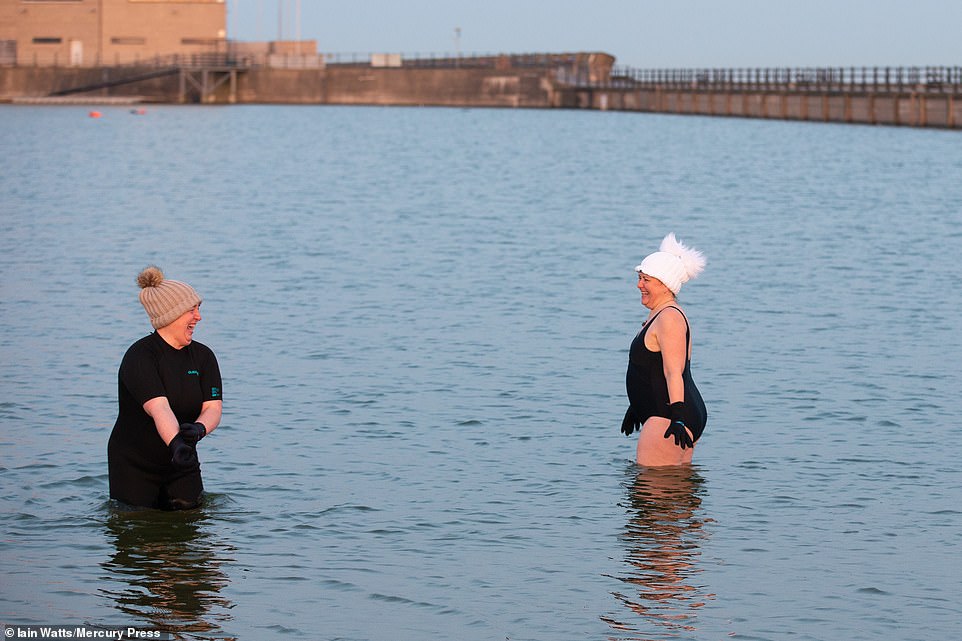 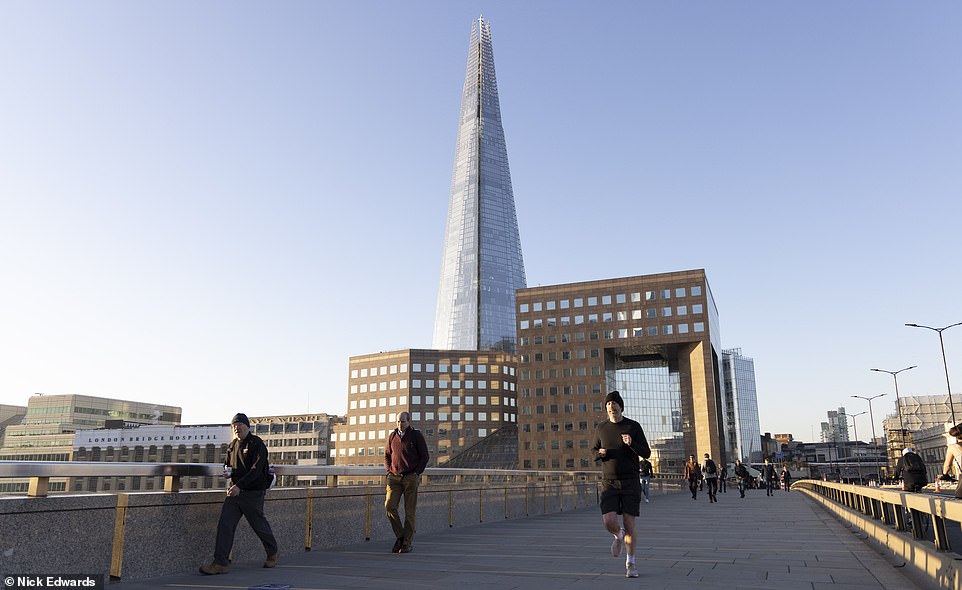 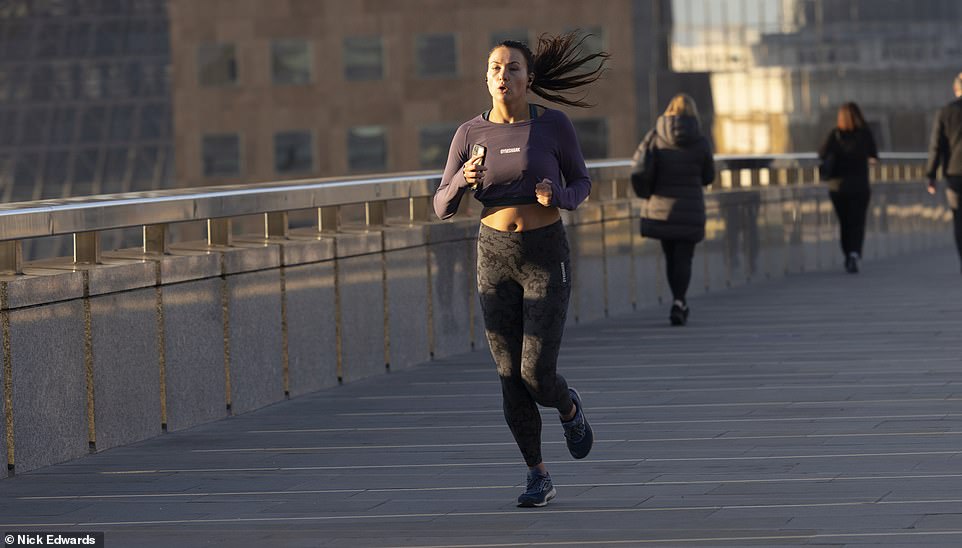 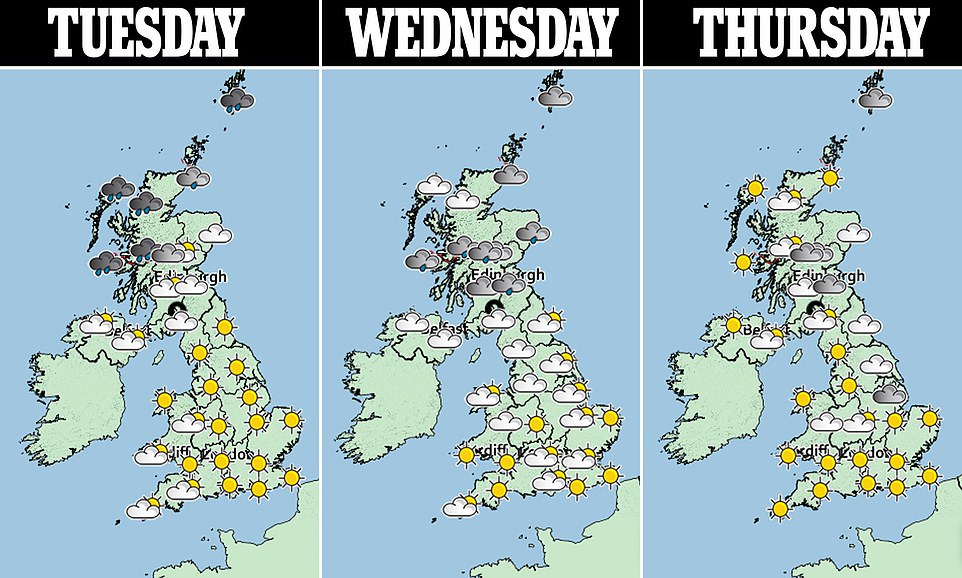 Grahame Madge, from the Met Office, said: ‘Temperatures of 24C or above have only been recorded on one day in March – March 29, 1968 – when a range of stations recorded high temperatures, with the maximum being 25.6C at Mepal in Cambridgeshire.

‘Therefore if temperatures rise to 24C next week, that will be only the second day in records going back to 1884 that the UK has seen a March temperature reach 24C.’

But while southerners can expect conditions to be dry and sunny from today, northerners might still need to pack an anorak – with showers still a possibility until tomorrow.

In traditional British topsy-turvy fashion, the weather is expected to change again from the middle of the week, with signs that cold air from the north could bring another dip in temperatures for Easter weekend.

By the end of the week, conditions are due to deteriorate, with showers likely in many areas.

Forecasters predict temperatures will drop to around or even below the seasonal average of 12C (54F) over Easter weekend, with widespread overnight frosts a possibility.

The coldest Easter weekend on record was in 2013 when minus 12.5C was recorded at Braemar in Aberdeenshire, on Easter Sunday, while the deepest snow recorded at Easter was on Good Friday came in 2010 when 36cm was measured at Strathdearn, northern Scotland.

The wettest Easter was in 1991 when 108.7mm of rainfall was recorded at Seatoller, in Cumbria, on Easter Monday. 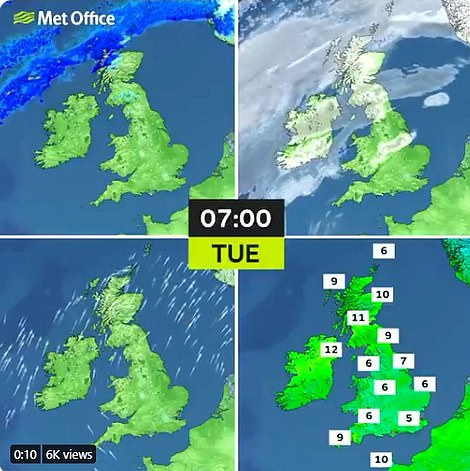 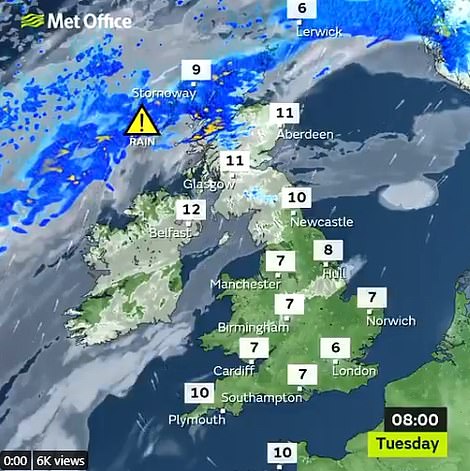 Tuesday will be warm, dry and sunny for much of the country – though weather warnings for rain remain in Scotland 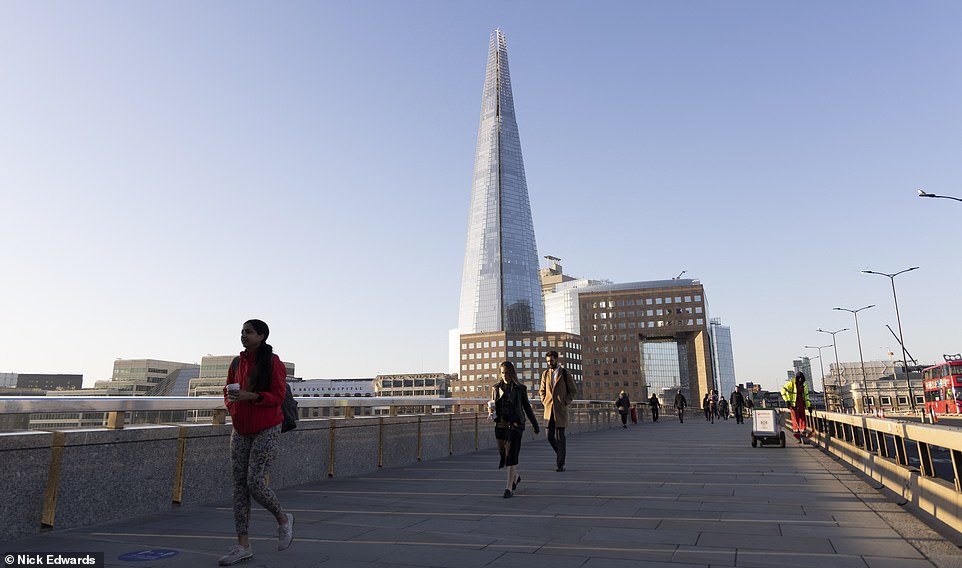 Commuters cross London Bridge in the the morning sunshine today, with temperatures expected to climb throughout the day 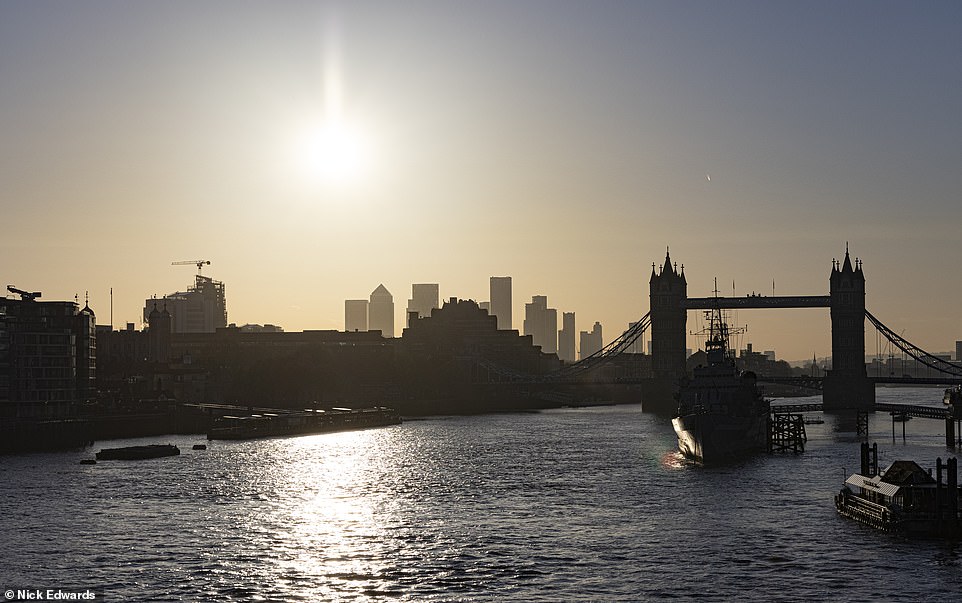 Yesterday much of England was cloaked in grey skies as blustery conditions left temperatures feeling three or four degrees cooler than the 12C to 14C (54-57F) showing on the thermometer.

Meanwhile Scotland will be hit by rain, wind – and even snow over the Bank Holiday weekend – while England is due to enjoy a pre-Easter heatwave.

A yellow Met Office warning for torrential rain was extended by 15 hours yesterday, meaning it will have been in force for 63 hours by the time it expires at 9am tomorrow.

At one stage yesterday, the Scottish Environment Protection Agency had 46 flood alerts and warnings in place.

For the Easter weekend forecasters said Arctic air on Sunday could bring snow showers. Oliver Claydon of the Met Office said: ‘We expect to see a return to wintry conditions.’