It is thought that warm weather and the fact more people were out enjoying local nature during the pandemic could be the reasons for more sightings of species such as the Large Blue.

Last year ranked as the tenth best for sightings since 1976 – according to an annual monitoring scheme run by charity Butterfly Conservation.

However researchers warned population levels of many species continue to be down compared with 40 years ago. 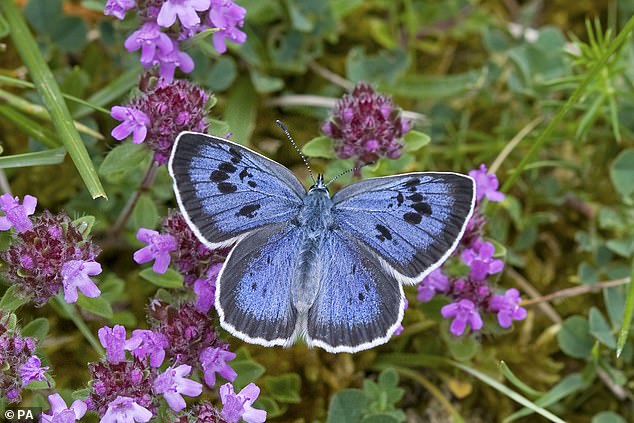 It is thought that warm weather and the fact more people were out enjoying local nature during the pandemic could be the reasons for more sightings of species such as the Large Blue, pictured

It has prompted a warning over ‘shifting baseline syndrome’, where people forget – or have never experienced – the greater abundance of wildlife found in the UK in the past and lower their expectations for how it can be restored.

Just under a third (31%) of butterfly species assessed in the UK show long-term declines, the monitoring scheme shows.

Dr Richard Fox, associate director of recording and monitoring at Butterfly Conservation, one of the organisations behind the scheme, warned that perceptions and measurements of what makes a good year have deteriorated over the decades.

‘If we think that achieving the number of butterflies in our garden, on our farm, in our local county or across the UK as a whole, that 2020 is a great level to be at, then we are deluding ourselves, and forgetting what’s been lost.’

Long-term declines are mainly driven by human activity, particularly the loss of habitat and climate change, though on a year-to-year basis butterfly numbers are affected by the weather.

In 2020 the most significant weather impact on the winged insects was the very warm, sunny spring, which was ‘not only wonderful to help us all get through that first lockdown, it was fantastic for butterflies’, Dr Fox said. 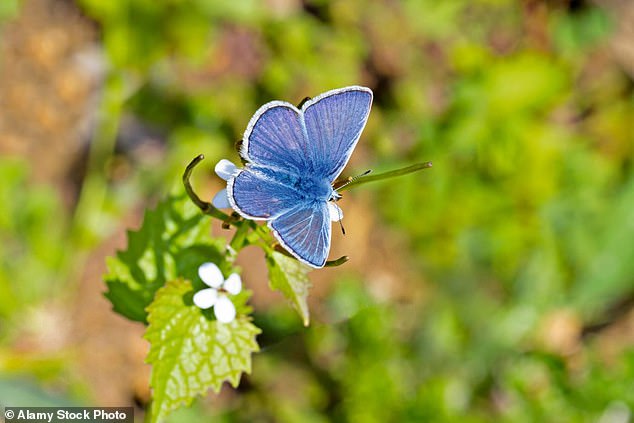 Just under a third (31%) of butterfly species assessed in the UK show long-term declines, the monitoring scheme shows

Among common species, brimstone, orange-tip and marbled white all did well, although their numbers were not at the exceptional levels seen the previous year.

The small tortoiseshell’s numbers were up 103% on 2019 after a run of four bad years, but they were still below long-term averages and have seen a 76% decline since 1976, the study found.

The small pearl-bordered fritillary had its third worst year on record in 2020, and populations have declined by 68% since 1976, while wall, grayling and small skipper butterflies all remained at a low ebb, the experts said.

Populations of many rarer species of butterfly have benefited from conservation action by wildlife groups and landowners, and scarce species such as the large blue, silver-spotted skipper and Duke of Burgundy had some of their best years in the survey.

But populations of many widespread and common species are down since the survey began in 1976 and were almost certainly declining before that, so even a good year results in lower numbers than in the past, Dr Fox said.