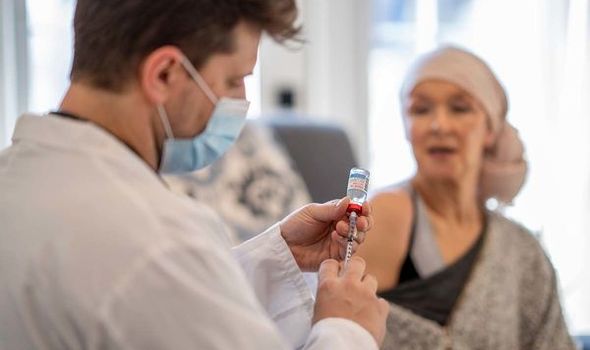 The treatment is designed to boost the body’s immune system to identify and destroy cancer cells. (Image: Getty Images)

The first jab has already been given and trials of the new technology are shortly to be widened to four NHS hospitals. The treatment is designed to boost the body’s immune system to identify and destroy cancer cells.

Medics have expressed excitement for the vaccination, which they describe as a potential “game changer for cancer medicine”.

Earlier this month, Sezgin Hick, a 61-year-old mother of two from Teddington, south-west London, was given the first of three fortnightly jabs to shrink her tumours, which had spread from her ovary into her lymph nodes and abdomen.

This was despite almost eight years of chemotherapy and immunotherapy treatments. She is the first of 36 critically ill patients who will be recruited into the vaccine trial, which experts say could eventually include people with a wide range of cancer types.

Ms Hick, a former intensive care nurse, who was diagnosed with ovarian cancer in 2012, has been told the new vaccine is now the only treatment available to her as all others have failed to work.

She is being treated at the private Sarah Cannon Research Institute in London, which accepts NHS patients, while other triallists will
be treated across four other hospitals – Christie Hospital in Manchester, Churchill Hospital in Oxford, London’s University College Hospital and Velindre Hospital in Cardiff.

She is the first patient to undergo the treatment and further trial centres will start up this month. The initial study is designed to target ovarian, prostate and lung cancers.

The first vaccine has been given and trials will soon widen to four NHS hospitals. (Image: Getty Images)

The vaccine, developed by biomedical company Oxford Vacmedix – a spin-out company of Oxford University – targets survivin, a protein over-expressed by cancer cells and found in a large variety of cancers.

Survivin replicates on cancer cells and helps them reproduce.

The new vaccine is made of a synthetic version of survivin.

It is designed to trigger the body’s immune system to ramp up in response, and in turn destroy tumour cells.

Professor Martin Forster, a cancer consultant at University College London and the chief investigator for the trial, said: “This new technology could ultimately change the landscape of the treatment of prostate, lung and ovarian cancers as well as other cancers in the future. Although we are at the early stages of our trials we hope that the vaccines will trigger the immune
system into action and get rid of tumours.

“It is very exciting as up to now there have been almost no licensed or approved vaccines to treat cancer and, if successful, it could be a game changer for cancer medicine.”

Dr Shisong Jiang, chief scientific officer at Oxford Vacmedix and academic in the Department of Oncology at Oxford University, said: “The new technology has been developed from an initial concept in the laboratory to now being tested as a treatment for critically ill patients.

Medics have expressed excitement for the vaccination. (Image: Getty Images)

“We see the potential benefits of this novel vaccination approach both in stimulating the body’s immune system to attack the cancer and also, in future trials, enhancing the action of other cancer treatments.

“This phase one trial is a first step towards having effective cancer vaccines.”

“This is a next generation of immunotherapy and because it is designed to stimulate the body’s own immune system, we do not expect it to have many side effects, nor damage healthy tissues in the way that chemotherapy does.”

There are currently no licensed or approved vaccines to treat cancer, so this novel vaccine is very exciting.

It works by stimulating the body’s immune system to become active against a protein called survivin, which is over-expressed on many different cancers, including ovarian, prostate and lung cancer.

After the vaccination, the body immediately recognises the survivin and sees it as something that should not be there, triggering the immune system to get rid of it.

What is happening where you live? Find out by adding your postcode or visit InYourArea

In doing so it also gets rid of the tumours that are also expressed on the cancer cells.

If the trials work, it may well be that, in the future, we use these vaccines in combination with immunotherapy drugs or as stand-alone treatments.

This intelligent technology will help us continue to move away from chemotherapy and radiotherapy, which can be so damaging.

This work has only been possible due to recent developments in our understanding of the immune system.

It could ultimately be a game changer for cancer medicine and we are very proud it has been generated from the UK.

Sezgin Hick, a 61-year-old mother of two, only discovered she had cancer after a road traffic accident, in 2012, which damaged her internal organs.

Doctors noticed a 10cm lump on her ovary, which was removed, and a full hysterectomy followed.

Since then she has intermittently been on rounds of different chemotherapy and immunotherapy treatments every year. She has also undergone operations to remove tumours that have appeared in her abdomen.

She says: “The cancer has now spread into my abdominal lining and my lymph nodes but the chemotherapy isn’t working. I had my last large dose in September, which made me very weak and breathless. I almost fainted.”

Ms Hick, from London, had her first of three fortnightly injections of the new treatment on November 1. She has had no side effects, other than a slightly sore arm.

She said: “I hope something positive happens to my cancer. This is a dream and it would be wonderful if it works for me.”