By Christopher Stevens for the Daily Mail

Until today’s comics grow out of the puerile urge to swear for laughs, there can never be another truly funny sitcom.

Foul language kills good comedy. It ditches the need for wit or clever characters, and replaces them with an easy spatter of obscenity.

Meet The Richardsons (Dave) is a prime example. Husband-and-wife comedians Jon Richardson and Lucy Beaumont have poured their hearts into this mock documentary about their domestic life.

But they grew up in the school of comedy that believes all you have to do to get a laugh is reel off a stream of profanities for a punchline. Every laugh is undermined, because the couple can always take the easy route by saying something dirty. 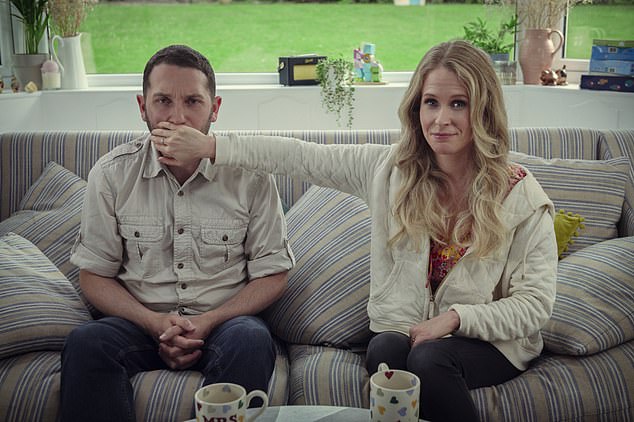 There’s no skill or talent in that. Anyone can do it. And everyone on telly does — which is why, when the BBC runs repeats of classic sitcoms, it has to go back decades to Fawlty Towers and Dad’s Army.

As the Richardsons returned for a second series, the running joke was that their three-year-old daughter Elsie has started casually using the F-word. Jon blamed Lucy, Lucy blamed Jon.

To settle the argument, they trawled through old footage. It amounted to a montage of the pair of them swearing constantly. What’s most frustrating is that the couple must know they could do so much better. Lucy, who co-writes the show with Tim Reid, has a great sense for the rhythm of a marital argument.

Jon is naturally funny, part of the tradition of hangdog English comics that goes back to Tony Hancock. Both admire dazzling wordplay, or they wouldn’t have chosen for their title music a cover of Jake Thackray’s sublime ditty, Lah-Di-Dah.

Jake was a Sixties songwriter from Leeds, like Noel Coward with a polo neck and a union card, who crammed whole novels into three-minute tunes. Lah-Di-Dah is a working-class bridegroom’s pledge to his posh fiancee: ‘I’ll be polite to your daddy/ Frightfully lah-di-dah . . . I won’t boo and hiss, when he starts to reminisce . . . The runs he used to score / And how he won the war . . . But I’ll have to grit me teeth when he goes on about his rupture.’

Quite apart from its melody, as pretty as anything by The Kinks, Lah-Di-Dah’s lyrics are honed to a fine edge.

Every laugh cuts as cleanly as a razor. Thackray didn’t need F-words for his comedy. He was far too clever for that. But a generation of viewers now expects constant swearing, which is what they also get from Keith Lemon and Celebrity Juice (ITV2).

This asinine panel game requires nothing from its players apart from four-letter rants and disgusting anecdotes about sex. Despite this, every round is heavily scripted and edited, so that it manages to combine potty-mouthed witlessness with a complete lack of spontaneity.

Emily Atack and Judi Love, whose agents must be working in shifts to keep up with their non-stop TV bookings, cackled and screeched whenever genitals were mentioned — so they never shut up. Roman Kemp, another whose career is at the flash-in-a-pan stage, mentioned his famous dad Martin every other minute — yet he denies accusations of exploiting his family connections.

Former Strictly judge Shirley Ballas was there to plug her autobiography, which was a waste of time since the sort of people who watch Celebrity Juice don’t buy books.

She blurted C-words as well as F-words, which I suppose makes her the funniest person on the show. She also had Strictly score-paddles to wave, with swearwords on them. How proud of herself Shirley must be this morning.