Immunity and vaccines WILL protect people against Brazilian and South African Covid variants because white blood cells recognise ‘virtually all’ versions of the virus, study claims

Immune cells from vaccines or past Covid infection should protect people from the Brazilian and South African variants of coronavirus, a small study has claimed.

Researchers tested whether immunity developed against the original Wuhan version of the virus would work on newer strains and saw that it did in lab tests.

Although virus-fighting antibodies did not work as well, they found white blood cells were still able to recognise the virus and launch attacks against it.

The study focused on cells called T-cells, which circulate in the blood and trigger an immune reaction when they find the virus they are trained to spot.

The scientists, from the US and Singapore, said ‘virtually all’ T-cells ‘should recognise these newly described variants’.

Experts have been worried that the Brazilian and South African variants of the virus, which are both now being found in the UK, US and worldwide, might escape the immune system and make vaccines less effective.

They have both mutated in a way that means they look different to the body and antibodies are less able to recognise them or destroy them.

This study adds to growing evidence that jabs will still work and people will still be protected. At least 55 per cent of people in the UK now have some level of immunity to the virus from either a vaccine or from surviving Covid. 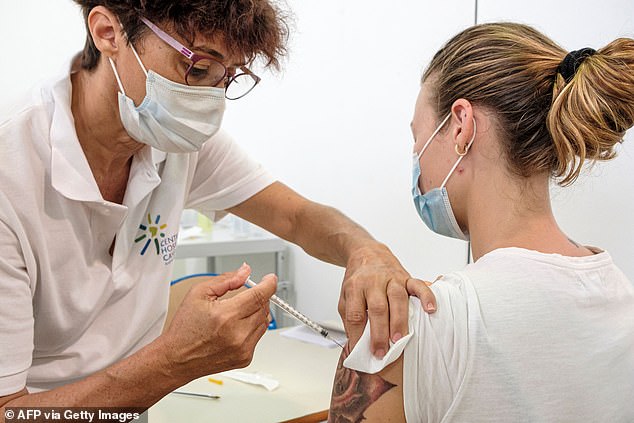 This study adds to growing evidence that immunity from past infection with Covid or from a vaccine will still protect people against getting sick from new variants (Pictured: A woman is vaccinated in Cayenne, French Guiana, South America)

The study was done by researchers at the US National Institutes of Health, Johns Hopkins University in Baltimore, and a firm called Immunoscape in Singapore.

T-cells are always in the blood on the lookout for the specific bug they are trained to spot and attack – in this case the coronavirus that causes Covid.

MORE THAN HALF OF BRITS HAVE COVID ANTIBODIES

Almost 55 per cent of people in England now have Covid antibodies, suggesting at least half of the population now has some immunity against the disease.

A major Office for National Statistics (ONS) testing survey today revealed 54.7 per cent of people in England had the virus-fighting proteins in the week ending March 14, up from 50.8 per cent the week prior.

The figure is likely to be even higher now because millions more have been vaccinated since the blood tests were conducted a fortnight ago, and it takes about two weeks for immunity to kick in.

It highlights the success of the country’s mammoth vaccine roll-out, which has seen 30.5million Brits given their first dose and 3.7m fully vaccinated.

The ONS report — based on random blood tests of around 30,000 adults — revealed the amount of people with detectable antibody levels across the rest of Britain on March 14 stood at 50.5 per cent in Wales, 49.3 per cent in Northern Ireland and 42.6 per cent in Scotland.

As well as through jabs, antibodies are made in response to previous infection. Their presence in blood generally means someone has some at least some protection against the disease and won’t fall ill. But they are not the only part of the immune system.

When the T-cells find the virus they are able to destroy other cells that have been infected with it and also signal to the immune system to send out more toxic substances such as antibodies to help it beat or stop the infection.

Many studies of Covid vaccines so far have focused on antibodies because they are the immune system’s frontline defence, and scientists have found they work less well when up against virus variants that they haven’t been specifically prepared for.

This is because they are super-specific and only recognise certain parts of a virus. If they change too much, the antibodies struggle to attach to them.

T-cells, however, are generally less specific and able to recognise and latch onto different parts of a virus, making them better at detecting different strains.

In this study blood samples from 30 people who had recovered from Covid were mixed with different Covid strains and scientists saw immune reactions in all of them.

Although the reactions might not be strong enough to totally stop the coronavirus because antibody responses were weaker, they would likely prevent severe illness or death.

The researchers wrote: ‘These data highlight the potential significant role of a … T-cell response in limiting viral escape, and partly mediate protection from disease caused by the SARS-CoV-2 variants.

‘It is important that vaccines used for widespread campaigns generate strong multivalent T-cell responses in addition to [neutralising antibody] and other humoral responses in order to optimize efficacy against the current SARS-CoV-2 and emerging strains.

‘It will be important to continue to monitor the breadth, magnitude, and durability of the anti-SARS-CoV-2 T-cell responses in recovered and vaccinated individuals as part of any assessment to determine if booster vaccinations are needed.’

They said a weakness of the study was that it was so small, only involving 30 people, and that they were all in North America so not globally diverse.

The study was published in the journal Open Forum Infectious Diseases.