All care homes in England have finally been vaccinated against Covid almost four months after the jab rollout began, NHS figures show.

The final outstanding home – unable to be visited for months because of a ongoing coronavirus outbreak – was visited by an NHS team of vaccinators last week.

Officials refused to name it but the milestone means people in all 10,413 eligible care homes across the country have been offered the first dose of a Covid vaccine that could save their life.

At least 94 per cent of them, some 273,685 people, have accepted the offer since the rollout began on December 8. Some may refuse and people who recently had Covid are not allowed the jab until they have recovered.

The Labour Party criticised the Government for not delivering on its promise to vaccinate all over-80s by February but Public Health England said there were ‘a number of factors’ that delayed medics’ abilities to reach some homes.

Although the rollout has gone well for care home residents, there are still concerns about low vaccination rates among staff and the Government is now considering making their jabs mandatory to protect elderly people. 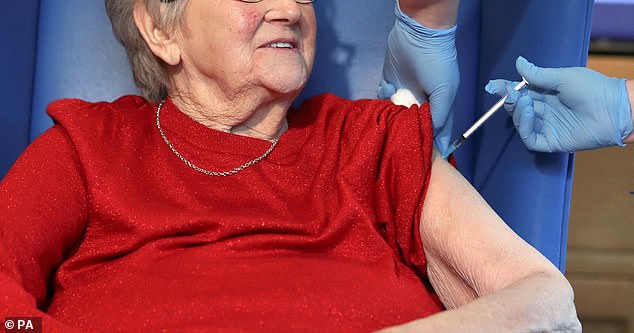 Care home residents are among the people most at risk of dying if they catch coronavirus because they tend to be elderly and have dementia or other serious health problems (Pictured: A woman is vaccinated at a care home in Scotland in December)

NHS data show that while the care home vaccine rollout has gone well for resident, fewer than half of staff have been immunised in some areas – with uptake worst in London – despite jabs being available to them since December

Before the week ending March 21, all but one home had a vaccination team offer jabs to the residents and staff, who are all top of the government’s priority list.

At the end of February there were just five care homes that hadn’t been reached, but it took another fortnight to finish off the list.

Care home residents are among the people most at risk of dying if they catch coronavirus because they tend to be elderly and have dementia or other serious health problems.

More than 41,000 residents have died of Covid in England so far – equal to around one in seven of all those now listed as eligible for a jab.

But more than nine out of 10 of the 300,000 on the patient list have now had at least one dose of the vaccine since the rollout started last year, meaning most will be protected against severe Covid-19.

Care home workers could be forced to get a coronavirus vaccine or quit their job, a leaked document revealed this week.

Boris Johnson and Matt Hancock are believed to have pushed for the move amid alarm over the low take-up of jabs among care home staff.

Figures show that only around a quarter of care homes in London and around half in other parts of England have reached ‘safe’ levels of vaccination of staff.

A paper was submitted to the Covid-19 Operations Cabinet sub- committee last week to make jabs compulsory for care home staff, according to the Daily Telegraph.

If the measures are voted through then England’s 1.5 million workers in social care could become legally required to get a coronavirus jab.

It presents a major departure from the Government’s previous insistence the jab would not be made mandatory.

It is also expected to raise anger among staff, with the paper itself warning that the policy could trigger an exodus of staff and even a string of human rights lawsuits.

The paper was drafted by the Department of Health and Social Care and is titled ‘Vaccination as a condition of deployment in adult social care and health setting’.

The key section for care workers reads: ‘The Prime Minister and the Secretary of State [for Health] have discussed on several occasions the progress that is being made to vaccinate social care workers against Covid-19 and have agreed – in order to reach a position of much greater safety for care recipients – to put in place legislation to require vaccinations among the workforce.’

Labour said it was concerned there are still significant numbers of elderly people not yet reached by the vaccine programme.

Liz Kendall MP, Labour’s Shadow Social Care Minister, said: ‘The Government promised that all over-80s would be vaccinated by mid-February, and yet in some places up to one in four elderly people are yet to receive their jab.

‘Many of these people will be frail, living alone, or housebound, and will be extremely worried about missing out on the vaccine.

‘Ministers must set out a clear plan to increase uptake, working with care providers, local councils and families to ensure the easiest possible access for those who are yet to be vaccinated.’

PHE said there were a ‘number of factors’ that could slow down efforts to reach individual homes, with risk assessments needed to minimise the risk of spreading the virus.

NHS England explains in its reports that the care home list ‘includes a small number of eligible care homes currently undergoing an outbreak and cannot be visited by a vaccination team as determined by the local authority public health team.’

Care homes have been at the top of the vaccine priority list since it was drawn up by the JCVI (Joint Committee on Vaccination and Immunisation) last year.

Statistics going up to March 21 released by NHS England last week show some areas of London have as little as 80 per cent of their care home residents vaccinated.

The lowest area in the country was Hackney (80.2 per cent) followed by Lewisham (84.3 per cent), which are both in the capital.

Some 13 other areas have seen less than 90 per cent of their care home residents vaccinated.

Getting vaccines out to the homes started slowly because the Pfizer jab, which initially had to be stored at -70°C and could not be transported easily, was the only one available until early January.

The fact that it came in huge batches of around 1,000 doses and had to be used quickly after defrosting meant it couldn’t be divided into small deliveries so was mostly reserved for large vaccination centres in towns and cities.

Oxford and AstraZeneca’s jab approval on January 4 meant the rollout could speed up monumentally because that can be stored at room temperature for a long time.

Although the vaccination of care home residents has largely been a success, attempts to immunise staff in the homes have not gone as well.

Ministers are now considering making it the law for care home staff to get a Covid vaccine because uptake rates are so low they could be putting elderly people at risk.

Only 76.6 per cent of care home workers have taken up the offer of the vaccine in England so far.

But the uptake rate varies wildly across the country, with six areas dishing out jabs to less than 60 per cent of their care home workers.

Just 404 of Lambeth in London’s 898 eligible care home staff have accepted the invitation for a vaccine — an uptake rate of just 45 per cent.

Pete Calveley, CEO of Barchester Healthcare which already employs a controversial ‘no jab no job’ policy, said his staff have a ‘duty’ to get the Covid vaccine to protect their residents from Covid.

He said the human rights of people living in care homes were at stake and staff must protect them.

The firm was one of the first to announce that it would not hire any new carers who haven’t been vaccinated and all existing staff must get a jab by the end of April.

Hesitancy is thought to be high among care staff because many of them are from low income or less educated households or black or ethnic minority communities. All of those groups are known to be more likely to refuse a vaccine.

Matt Hancock on Monday admitted mandatory vaccination was ‘something we are looking at’ and claimed ‘many’ care homes have supported the proposal.

He scolded carers who have turned down their jab appointments, warning that they ‘have a duty of care not to pass on the disease’ to frail residents.

His comments came after a leaked paper submitted to the Covid Operations Cabinet committee showed Mr Hancock and Boris Johnson both had agreed to compulsory jabs for care staff.

Mr Hancock told LBC: ‘On this one, no decision has been taken, but it is something that we are looking at.

‘Because people who are looking after elderly residents in care homes, who we know to be the most vulnerable to Covid, they have a duty of care not to pass on the disease and it is a reasonable question.’

He said ‘many’ care homes had asked for this to happen, adding: ‘There’s a legal change that’s required and, as you can see, I’m open to that, but no final decision has been taken.’