Householders in more than 100 districts will receive average bills of more than £2,000 next week as town halls put up council tax by 11 times the rate of inflation.

Across England the average bill for a typical Band D home will be £1,898 – up £80 on last year, according to figures released yesterday. 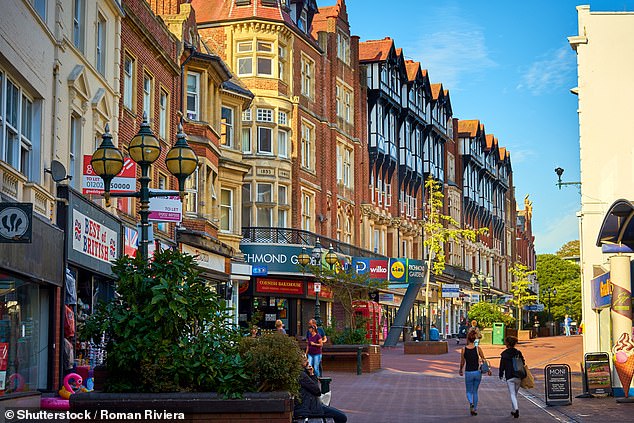 Bournemouth, Dorset, where annual council tax will reach £2,223 for properties in Band D

Rates will soar by 4.4 per cent, 11 times the current 0.4 per cent inflation rate, at a time when millions of families have had finances hit by the Covid pandemic.

It means average bills are now almost a third higher than they were a decade ago.

Much of the increase is down to the fact that ministers have passed on responsibility for raising funds for England’s social care system to town halls, rather than increasing Whitehall grants.

Yesterday a damning report from the Government’s spending watchdog showed that, despite this, the number of elderly people supported by the care system is still lower than it was five years ago. 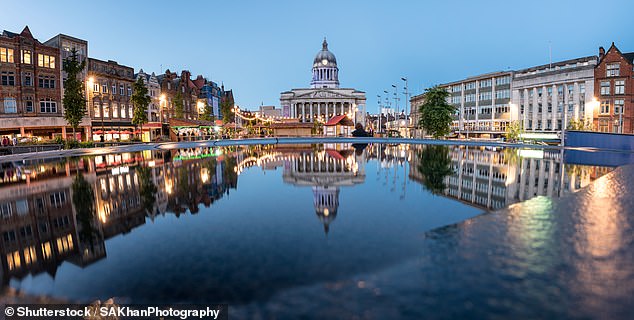 Old Market Square in Nottingham, where bills will reach £2,226 for Band D properties

Bills are sent out by districts but include charges levied by county councils, police and crime commissioners, fire authorities and bodies like the Mayor of London.

Parish and town council precepts were not included in the totals released yesterday, meaning bills will be even higher for some. The higher rates will be payable from the start of April. Households pay the levy in bands, from Band A for the cheapest homes to Band H for the most expensive. Band D is used as the average figure. 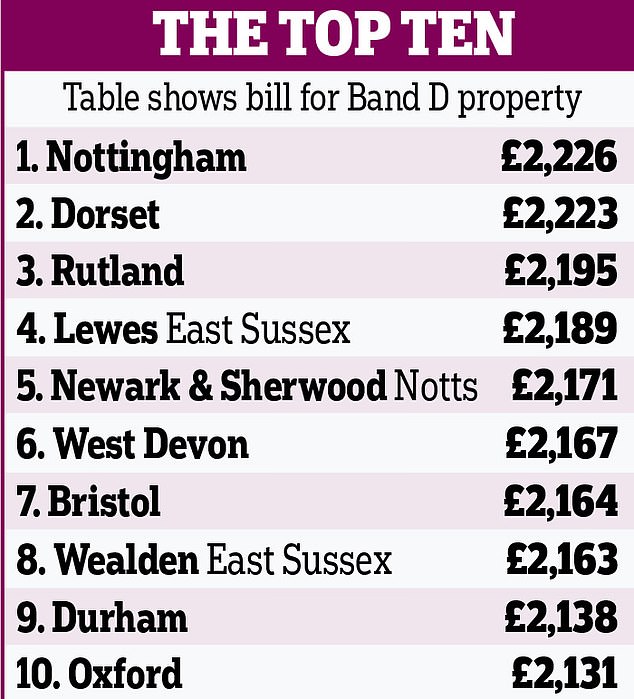 Chancellor Rishi Sunak announced last year that councils could raise bills by 2 per cent without a referendum.

Upper-tier local authorities such as county councils were also allowed to add a further 3 per cent to pay for social care.

The figures published yesterday by the Ministry of Housing, Communities and Local Government show that most councils opted for a maximum or close-to-maximum increase.

The highest increases were in London, where bills rose by 4.7 per cent, partly due to a rise from Mayor Sadiq Khan. For the first time, a borough in the capital, Kingston upon Thames, issued bills of more than £2,000. 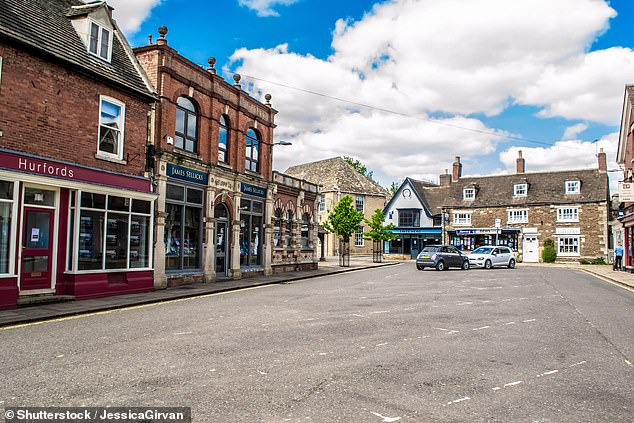 Across England, 104 councils issued bills exceeding £2,000 – almost three times the total last year. The document also reveals that average bills have increased by a third in the past decade – from £1,439 in 2011/12 to £1,898 in 2021/22. The lowest council tax bills are in or near London. Of ten authorities charging less than £1,600, nine are in the capital, and the other is nearby Windsor and Maidenhead.

Figures like these have led to Tory MPs in northern seats demanding council tax reform, saying it is unfair that those in poorer areas should pay more.

Some have called for a proportionate property tax to replace it, levied at a rate of 0.48 per cent of house values, leading to falls across the country but rises in London. Caroline Abrahams, of Age UK, said it was wrong that councils were footing the bill for Covid. She said: ‘The social care system is in dire need of reform and sadly raising council taxes just won’t cut it.

‘The Prime Minister has a once in a generation chance to do the right thing, so older people get the care support they need.’

A spokesman for the Ministry of Housing, Communities and Local Government said: ‘We’ve committed over £36billion to help councils support their communities and local businesses during the pandemic.’