The NHS was today accused of missing a trick after it emerged dozens of vaccination sites around the country are closing for the bank holiday weekend.

The Adam Smith Institute think-tank slammed centres for shutting on the days more people would be able to get their first jab because they are off work.

It said ‘the virus doesn’t sleep’ and nor should the UK as it enters a crucial stage of the roll-out in trying to finish vaccinating everyone over 50 in the next two weeks.

But the NHS hit back, saying jabs are being dished out over the Easter weekend ‘in line with available supply’ and that most clinics were staying open.

A spokesperson said the 1,600 sites across England would be open based on the needs of the local community but jab clinics in London, Berkshire, Norfolk, Derbyshire, Hertfordshire and Merseyside have all closed today and will remain shut on Monday.

The NHS insists it is on track to hit the target of offering jabs to all over-50s and at-risk adults by April 15.

It praised staff for working so hard throughout the pandemic and said it was up to local volunteers to decide whether they want to work through the holiday.

But critics said the country ‘cannot afford delay’ and that the virus ‘doesn’t take weekends off’ or ‘stop for an Easter egg’. 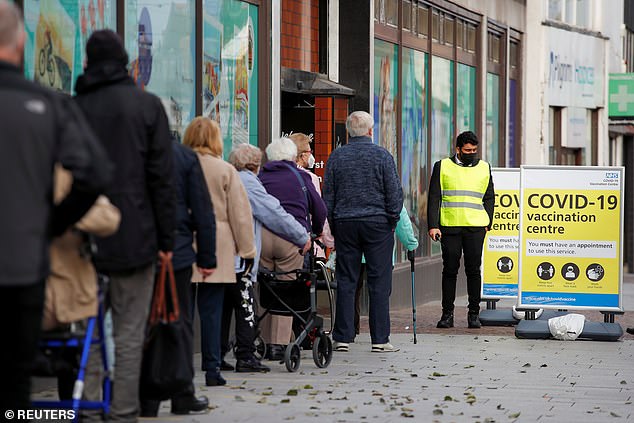 Jab clinics in London, Berkshire, Norfolk, Derbyshire, Hertfordshire and Merseyside have all closed for the bank holiday weekend from today until Monday. Pictured: A Debenhams store used as a vaccination centre in Folkestone, Kent

James Lawson, of the Adam Smith Institute think tank, told MailOnline vaccination sites should have taken advantage of workers being off over the weekend and therefore better able to book appointments.

He said: ‘The vaccine campaign has improved dramatically but it’s disappointing to see some centres are slacking off for Easter.

‘We are at war with this dreadful virus, and cannot afford delay. The virus doesn’t rest, it doesn’t sleep, it doesn’t take weekends off and it certainly doesn’t stop for an Easter egg.

‘We need to keep up the campaign seven days a week. If anything we should be extending vaccine centre hours, with demand for 24-hour facilities.

‘The holidays would provide ideal slots for many people needing a vaccine but who struggle to get time out or off work during the week.’

NHS England has previously said it was considering its position on whether it would force all vaccination sites to operate over the weekend.

Sonning Common Health Centre in Reading and Parkwood Surgery in Hemel Hempstead both released messages saying they will not be open for jabs from today until Easter Monday.

And Nonsuch Mansion in Sutton, London, confirmed in a special notice on its website its vaccination centre would not be open on Easter Sunday or Monday.

WHERE ARE VACCINE SITES CLOSING FOR EASTER?

But the NHS does not collect any official data on which sites are remaining open.

An NHS spokesperson said: ‘Vaccines are being administered over the Easter weekend in line with available supply, so it’s is a shame that the MailOnline seems determined — based on a sample of around one per cent of the 1,600 vaccination sites in England — to write a story criticising the selflessness of volunteers and NHS staff who are giving up their time over the bank holiday to ensure that even more people most at risk of Covid-19 get protected, on top of the 26million people who already have been successfully jabbed.’

But in February, an NHS primary care bulletin confirmed it was considering making it mandatory for GP-led vaccination centres to stay open seven days a week.

It said: ‘With the Easter bank holiday weekend fast approaching, we wanted to confirm there are currently no plans to ask all of primary care (general practice, community pharmacy, dentistry and optometry) to routinely open again.

‘However, we continue to keep this position under review, subject to the changing demands of the pandemic.

‘Local vaccination services remain the exception, where necessary providing a seven-day service, including bank holidays. Further communications on that will follow.

‘We are extremely grateful to those who will be working over the Easter weekend but hope that everyone will be able to benefit from additional rest days.’

NHS England statistics to March 28 showed that up to 93 per cent of people over 50 — the last of the priority groups — have now had at least one dose of the vaccine.

But 2.8million are still yet to receive their first jab, with the Government’s target of reaching all of the top nine priority groups in a couple of weeks fast approaching.

It comes after governments in Europe pleaded with local authorities to keep sites open over Easter as the continent faces a third wave of infections.

The shutdown came as the country scrambles to make up for lost time in its national vaccination plan due to supply shortfalls.

Spain, like other European Union nations, has had a surprisingly slow vaccine rollout that authorities blame on vaccine shortages.

In response to criticism from political opponents, which came about a month before a regional election, the Madrid regional government said its health centres stepped up vaccinations earlier this week to compensate for the closures.