Almost 15 per cent of people who test positive for coronavirus in England do not follow self-isolation rules, official figures suggest.

The Office for National Statistics said just 86 per cent of infected patients stayed at home and did not see other people during their 10-day quarantine.

More than a fifth of those who flouted the rules said they had at least one visitor to their home who was not there for emergency reasons.

But the most common excuse was leaving the house to go shopping, dropping children off at school or going to work. Thirteen per cent of isolators said they were not paid during their self-quarantine period.

The ONS analysed responses from 2,500 adults who had tested positive for Covid in February and who were at the end of their isolation period.

On the back of the concerning results, the Government today announced it will give an extra £13million a month to local councils to support people isolating. The money will go towards food and medicine deliveries and helping with caring responsibilities.

People who test positive for Covid or are a close contact of someone who is infected are legally required to self isolate for 10 days. Those caught flouting the rules can be fined £1,000 – rising to £10,000 for repeat offenders and ‘the most egregious breaches’.

Britons on low incomes who cannot work from home receive a £500 lump sum if they forced to self-isolate. 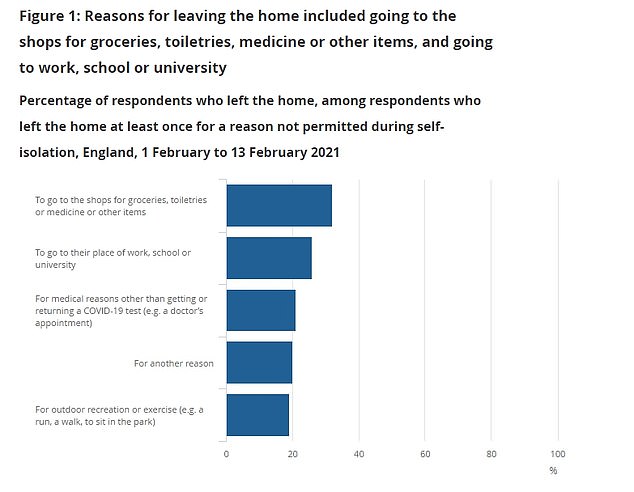 The Office for National Statistics said just 86 per cent of infected patients stayed at home and did not see other people during their 10-day quarantine. More than a fifth of those who flouted the rules said they had at least one visitor to their home who was not there for emergency reasons 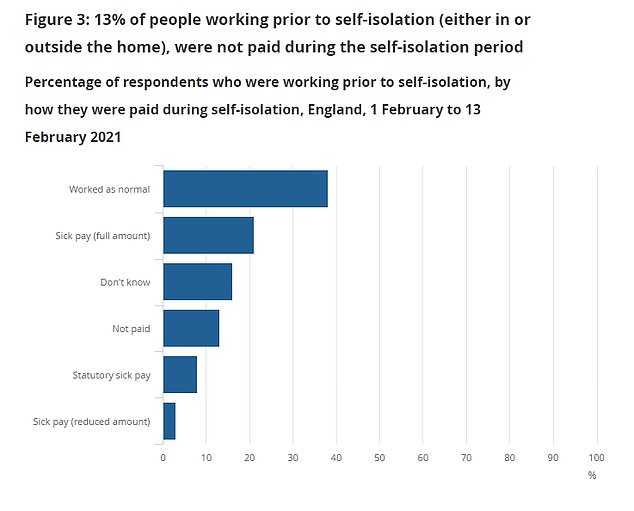 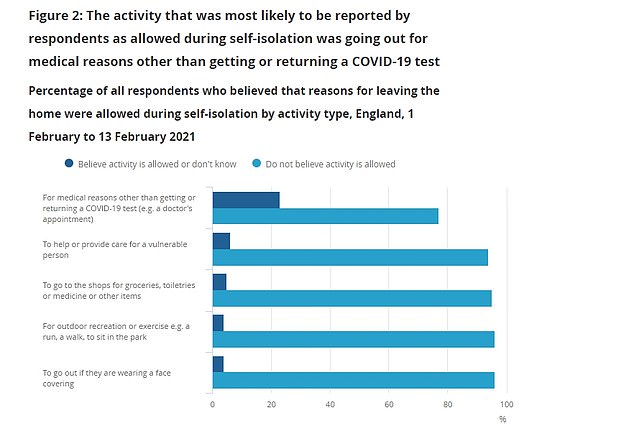 Writing in its report, the ONS said non-compliant behaviour was most likely to take place between the onset of symptoms and getting a test result.

Half of respondents received their test result within 24 hours and 10 per cent waited more than 72 hours, it said.

Foreign holidays will be ILLEGAL from Monday: New Covid laws mean £5,000 fines for anyone leaving the UK without ‘reasonable excuse’

Travellers face a £5,000 fine for going abroad on holiday when a ban on leaving the UK without ‘reasonable excuse’ comes into force on Monday.

And France is likely to be added to a ‘red list’ of countries requiring hotel quarantine by the end of the week.

Health officials are increasingly concerned by a surge in cases of the South African Covid variant across the Channel.

A senior minister even suggested the whole of the Continent could be put on the red list because of the botched vaccine rollout.

Quarantine-free holidays may not be possible until August, killing off hopes of trips abroad until late summer.

A ‘traffic light’ system is under consideration, allowing travel to ‘green’ countries without the need for quarantine on return.

Government sources stressed however that no decision has yet been made.

Some 98 per cent reported adhering to the requirements in the 24 hours after a positive test and 94 per cent between this point and the end of the 10 days.

More than one in three adults found self-isolating had a negative effect on their wellbeing and mental health.

But 58 per cent reported no effect.

Around a third reported a loss of income while 13 per cent of those who had been working prior to self-isolating – either in or outside their home – said they were not paid during the self-isolation period.

Tim Gibbs, from the ONS public services analysis team, said: ‘Although it’s a legal duty, self-isolation does disrupt day-to-day life and we can see that there are key side effects of self-isolation such as worsening mental health and loss of income.

‘Despite this, our analysis shows that a majority of people report fully adhering to the rules throughout their self-isolation period.

‘This behaviour is vital in preventing the spread of Covid-19 and keeping people safe.’

The Department of Health said its £13m cash injection would tackle the ‘practical challenges of being asked to self-isolate’.

An extra £3.2m per month has been allocated to a free medicines delivery service for people who are self-isolating and don’t have access to help in collecting their prescription.

Community pharmacies and dispensing doctors are already funded to provide a medicines delivery service in instances where shielding advice is in place. This system is being replicated to cover people who need to self-isolate.

Health Secretary Matt Hancock said: ‘I am delighted that today’s statistics show the vast majority of people in this country are doing the right thing and following the rules to help protect the NHS, and save lives.

‘The government has increased funding for local authorities by over £30 million a month to give financial and practical support to those who have to self-isolate, helping them to avoid spreading the disease to their communities.

‘Around one in three have the virus without symptoms, so it is vital those who are asked to self-isolate by NHS Test and Trace do so to turn the table on this terrible virus.’