During the week that ended on November 4, 107,350 kids across the nation tested positive for Covid, an increase over the 100,630 the week before, according to a new report by the American Academy of Pediatrics (AAP).

These cases are mostly clustered in Midwestern and western states, as overall cases begin to trend upwards in some parts of the nation heading into the holiday season.

It is the first week since early September that cases have increased over the previous week just as COVID-19 vaccines begin to rollout for children aged five to 11.

COVID-19 cases among children grew by 7% last week, to 107,350 new cases. It is the first time in two months that week-over-week youth Covid cases increased

Children account for 24% of active Covid cases in the U.S., a slight decrease from the 24.2% of cases the youth accounted for last week

During the week that ended September 2, a few weeks into the new school year, about 250,000 children tested positive for the virus – the most of any week since the pandemic began.

Case numbers began to rapidly fall after that, as schools managed their Covid situations and the summer Delta variant surge winded down.

Cases dropped 60 percent over the next eight weeks, all the way down to 100,000 during the week that ended October 28.

Despite the increase in Covid cases among children last week, hospitalizations and deaths remain low.

The AAP reports that less than one percent of children who contract the virus are hospitalized, and kids make up less than 0.01 percent of all Covid deaths in the U.S.

The nation’s Covid burden seems to have travelled westward as well.

America’s COVID-19 burden is travelling west, with the Midwest (purple) and West (yellow) regions of the U.S. now accounting for 35,000 cases among children each. The South (green), which once accounted for more than half of new cases, now only accounts for 20,000

When cases among children were at their peak, the Southern region of the U.S. accounted for more than half of cases by itself.

But now, the South is recording fewer cases than only the Northeast region, with only 20,000 last week.

Comparatively, the West and Midwest are being hit hardest with each of the regions recording 35,000 new cases among children last week.

In total, children make up 24 percent of active cases, per the report, a slight decrease from last week, as cases among adults have risen more than among kids. 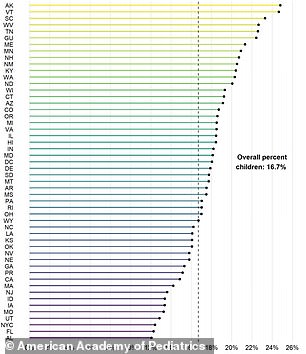 One out of every four people to test positive for Covid in Alaska or Vermont since the pandemic began are children, the most of any states

Children have accounted for nearly 17 percent of cases since the pandemic first began.

In Alaska and Vermont, children make up nearly one out of every four cases recorded.

In contrast, children make up under 13 percent of total Covid cases in Alabama and Florida.

To control the spread of Covid among children, regulators authorized the use of the Pfizer-BioNTech in children aged five to 11 last week – the first vaccine available to children that young.

The move puts America among the nations vaccinating the youngest people, and many parents may not get their children jabbed in the near future.

A recent survey by the Kaiser Family Foundation found that 30 percent of parents with a child aged five to 11 will ‘definitely not’ get their child vaccinated.

The White House expects the number of children aged five to 11 to receive at least one shot of the vaccine to reach 900,000 by end of day Wednesday, according to an NPR report.