Kill the Bill protesters started gathering in Bristol this afternoon ahead of another demonstration after a senior police chief warned they would ‘face the full weight of the law’ after earlier riots.

Hundreds of protesters faced off with police on College Green in the city centre to demonstrate against the Government’s controversial new policing bill which criminalises protests deemed a ‘public nuisance.’

The first demonstration held last Sunday attended by around 3,000 rapidly degenerated into rioting outside the local police station, with police vans torched and officers assaulted by mask-wearing activists.

Nine people have been arrested in connection with the disorder, which saw officers attacked, police vehicles set on fire and the windows of a police station smashed. 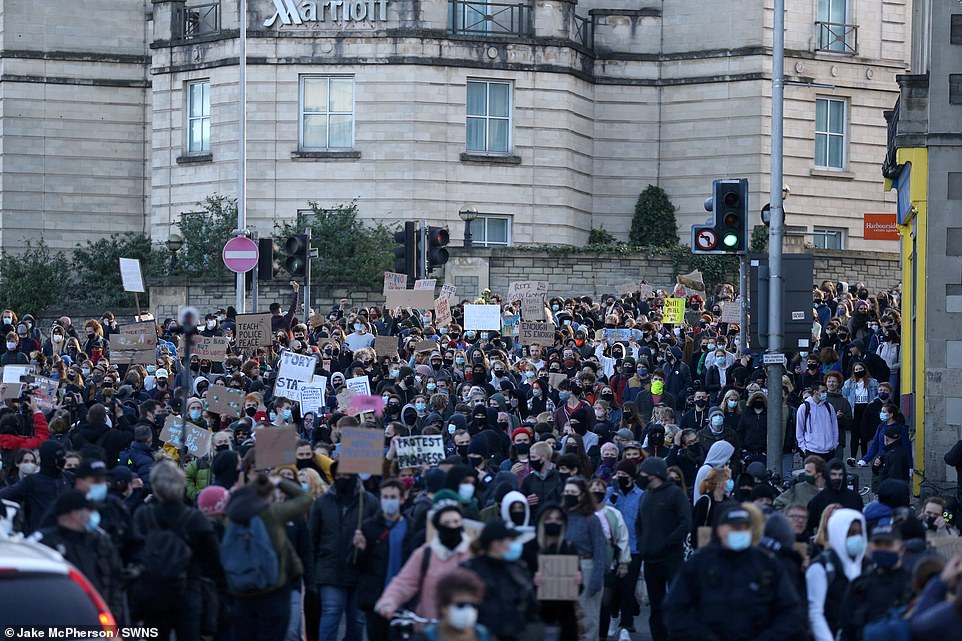 Protestors gather on College Green, Bristol ahead of the third ‘Kill the Bill’ protest against new policing powers this evening 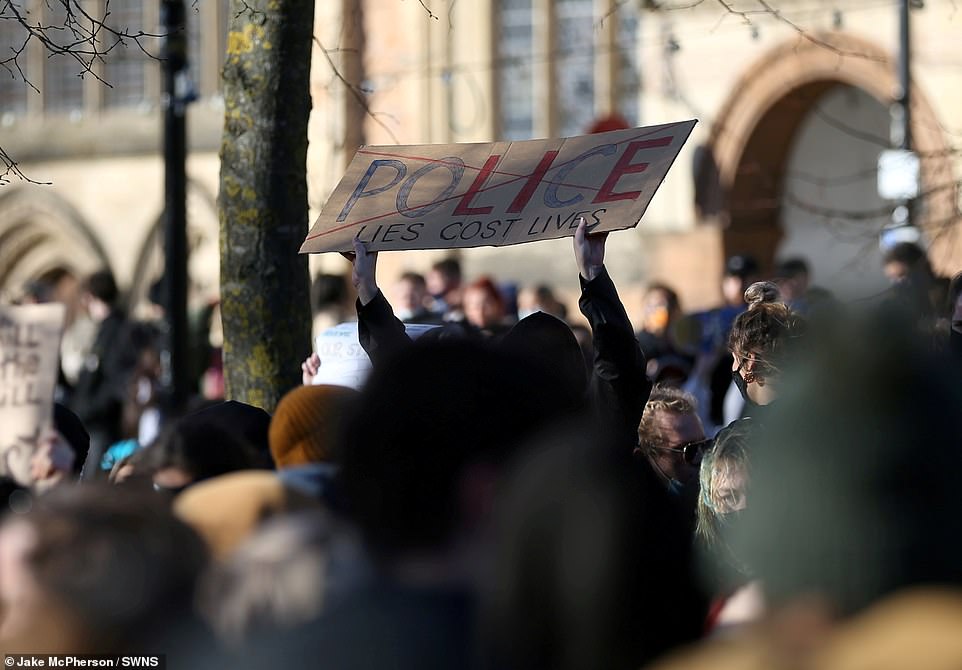 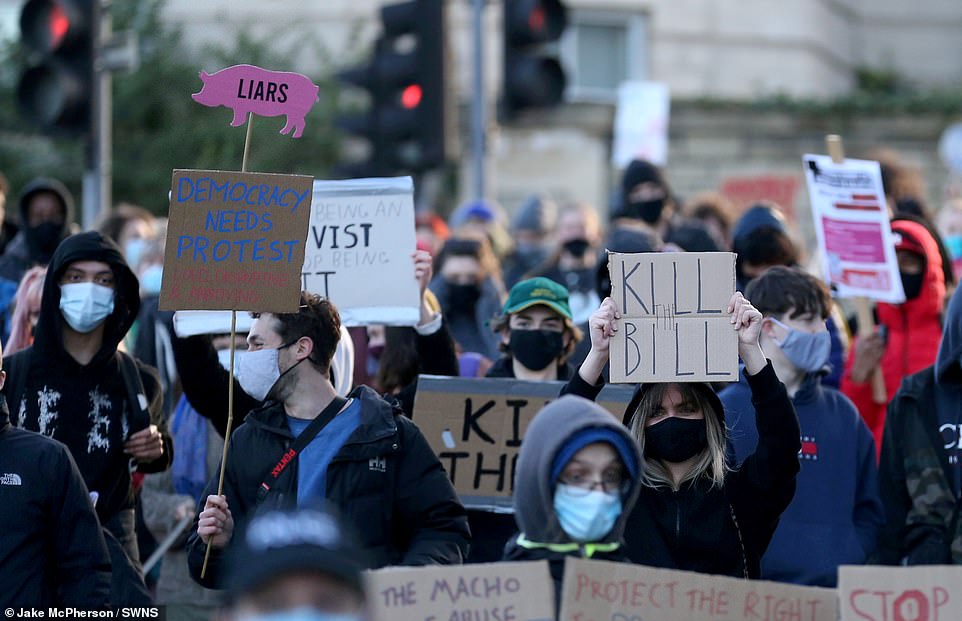 Demonstrators hold signs urging the government to ‘kill the bill’, another holds a depiction of a pig – an insult which is used against police 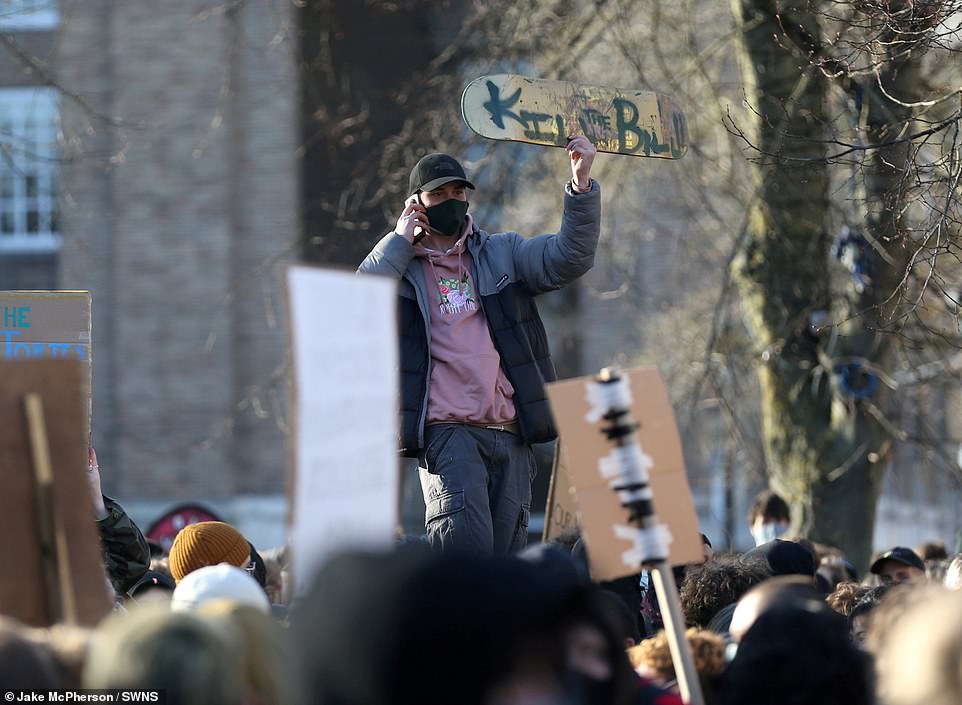 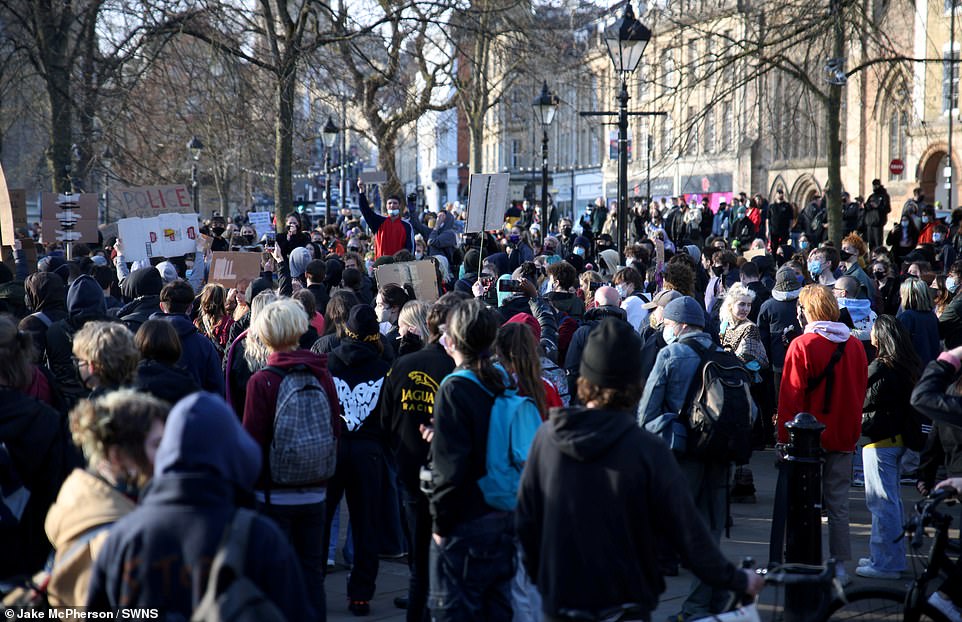 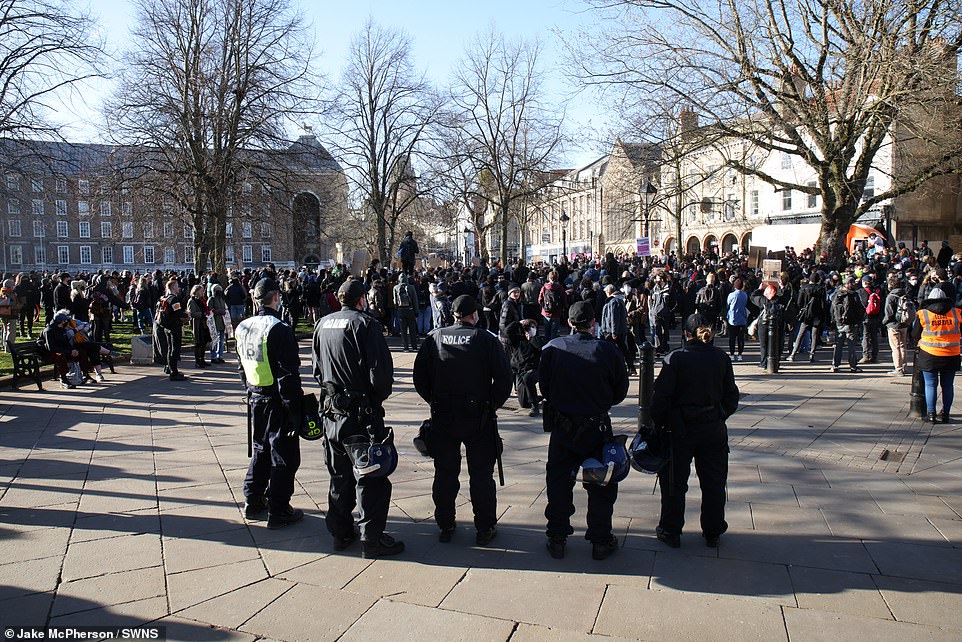 Police officers with helmets clipped to their waists, along with batons, survey the scene on College Green, Bristol, on Friday afternoon 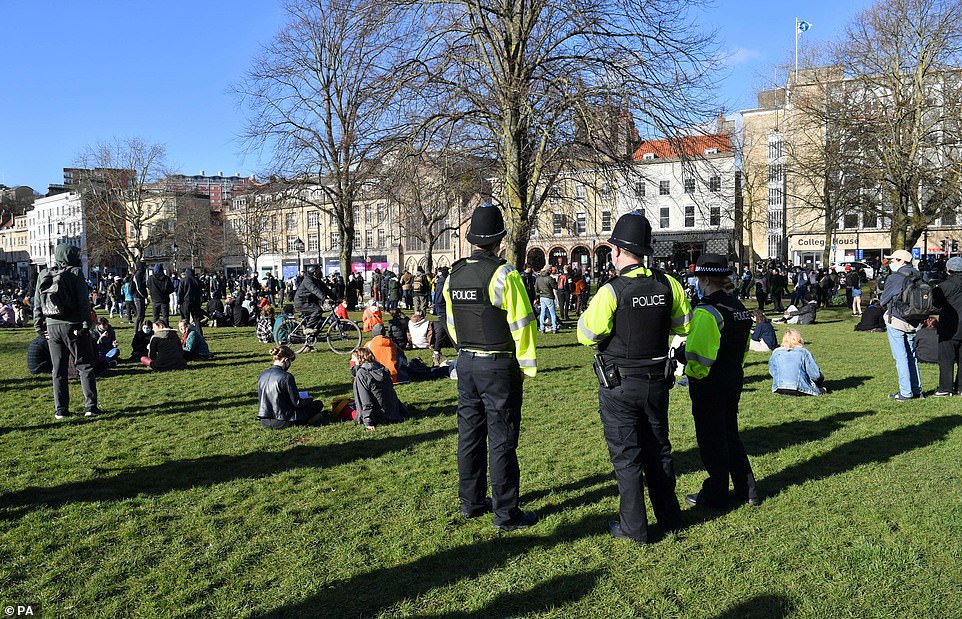 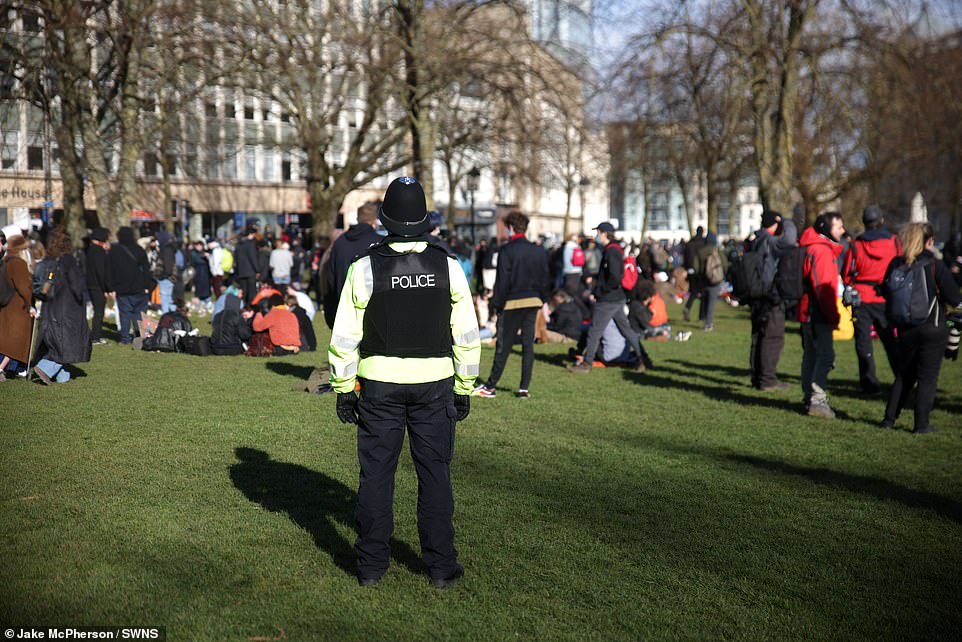 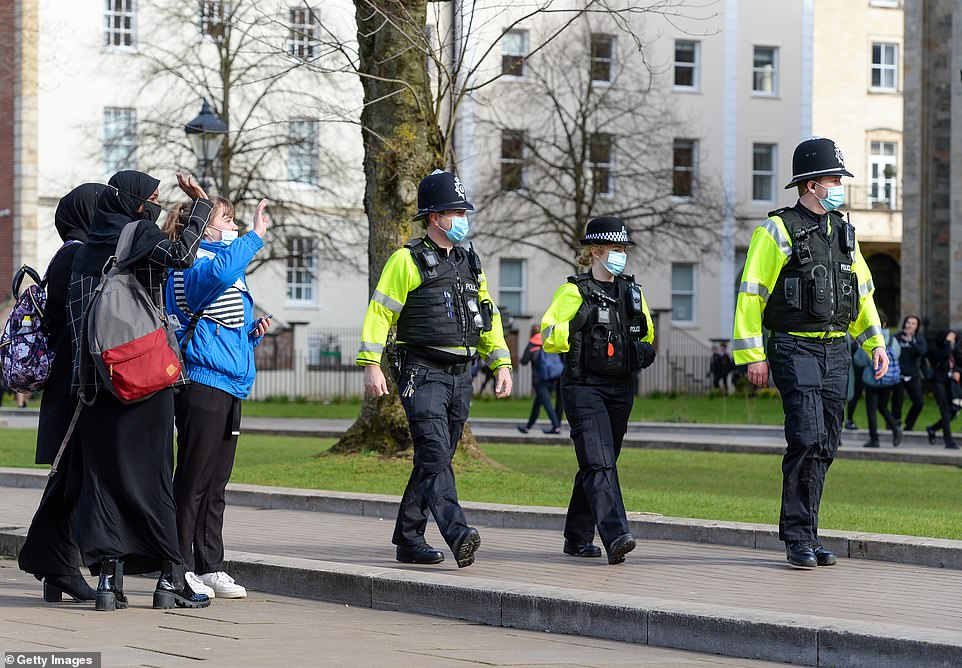 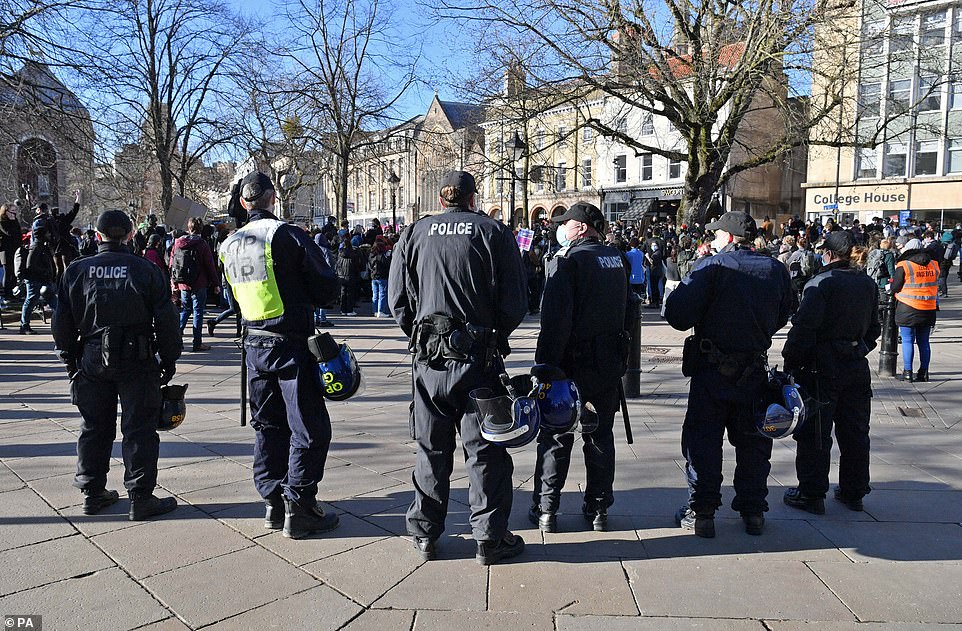 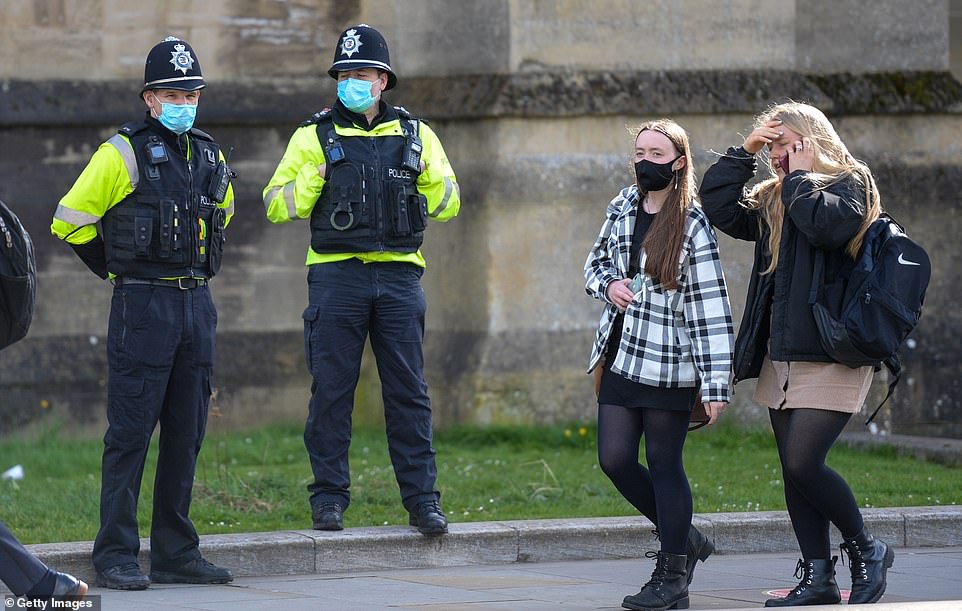 A second protest took place on College Green on Tuesday night and resulted in 15 arrests.

Yesterday police shared footage from Sunday’s protect, showing the moment a lit item was placed under a police van while a police officer was inside.

Tonight, demonstrators are set to descend on Bristol for a third time, prompting calls from Avon and Somerset Police for people to stay at home.

He said: ‘My belief is that, in this current climate of lockdowns, young people, bored and frustrated by their situation, witnessing a standoff with police in the evening, could be inclined to take out their aggression on the police who they may feel responsible for their lack of possibilities at the moment.

‘We normally chose day times on weekends to negate the risk of people with alternate agendas hijacking our protests.

‘I cannot support the choice of a Friday afternoon start, it’s a recipe for disaster, obviously, and therefore I fear this event has been organised by someone with bad intentions, and so I want to be distanced from it entirely, as do those I know.’

She said: ‘We are aware that some people may be intending to protest in Bristol and Bath this weekend, 26 to 28 March.

‘Once again, we remind everyone that we’re still in a pandemic which has cost many lives and remains a significant challenge for our colleagues in the NHS.

‘We have all sacrificed so much to stop the spread of this terrible disease and we’re so close to a relaxation of the restrictions, when peaceful protest will again be possible.

‘In Avon and Somerset we remain committed to facilitating peaceful protest when it’s safe and lawful to do so, however gatherings remain a breach of COVID restrictions and risk increasing the spread of coronavirus.

‘We urge you not to come. ‘We do understand the strength of opposition to the new legislation being debated in Parliament.

‘Protest is a right which we’re asking people to be responsible about exercising right now. This is about public health and public safety at a time of pandemic.

‘Please consider making your voice heard in different ways – such as contacting your MP or signing one of the petitions available online.

‘Thirteen people were arrested after we asked people to disperse from Tuesday’s protest.

‘Ten of them were aged between 19 and 25 – young people who clearly have a social conscience, but who may now face a criminal conviction which could impact on their whole futures and their chances of making a real difference in society. 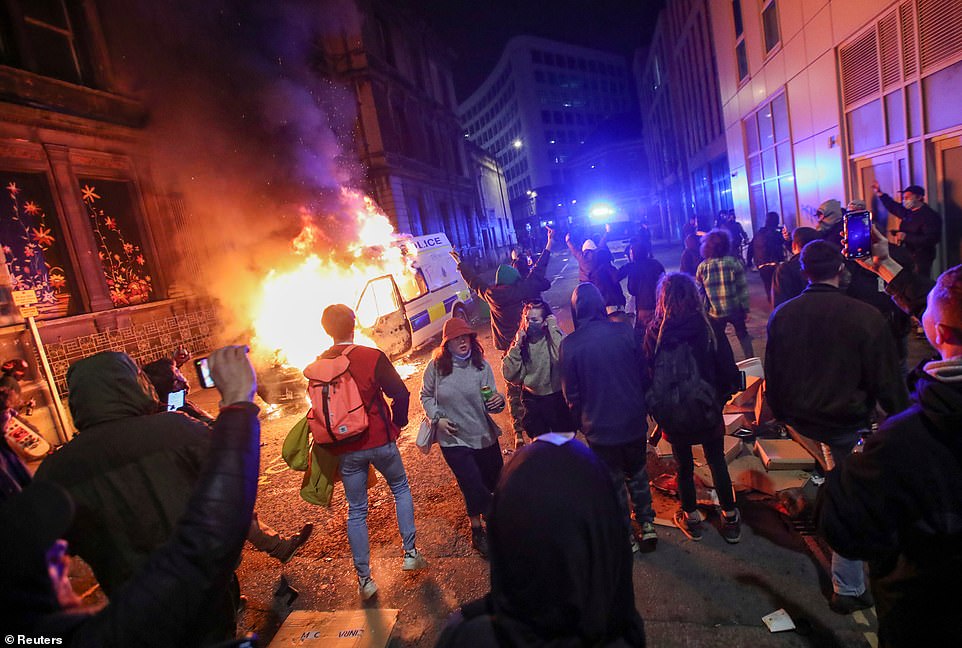 After violent clashes with officers saw a police vans set alight on Sunday, demonstrators are set to return to College Green in Bristol for a third protest tonight 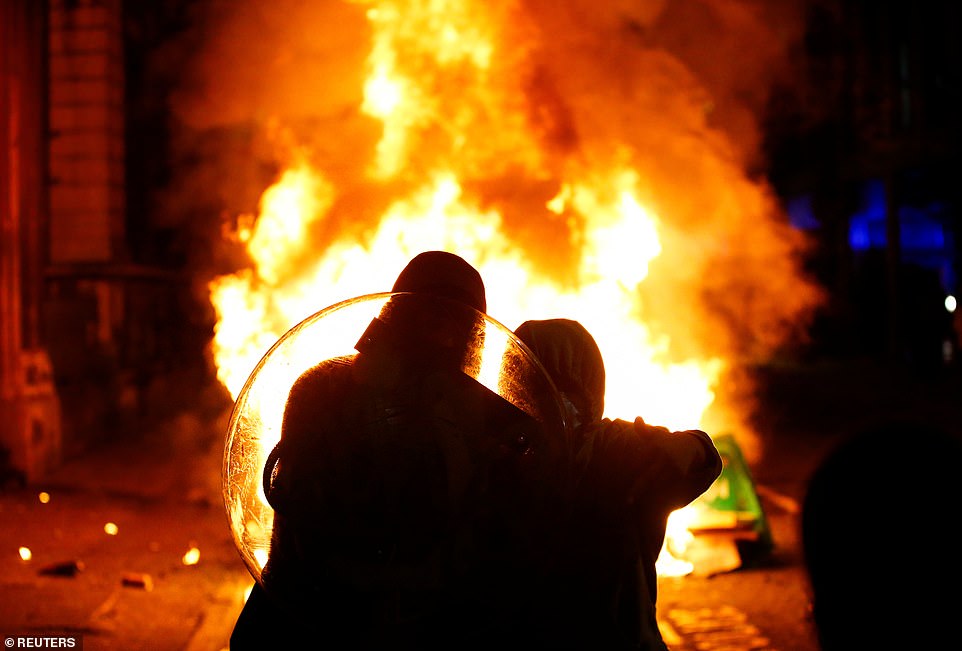 Fires were started and protestors clashed with police on Sunday. Chief Superintendent Claire Armes, Avon and Somerset Police’s head of operational support, urged people not to march this weekend 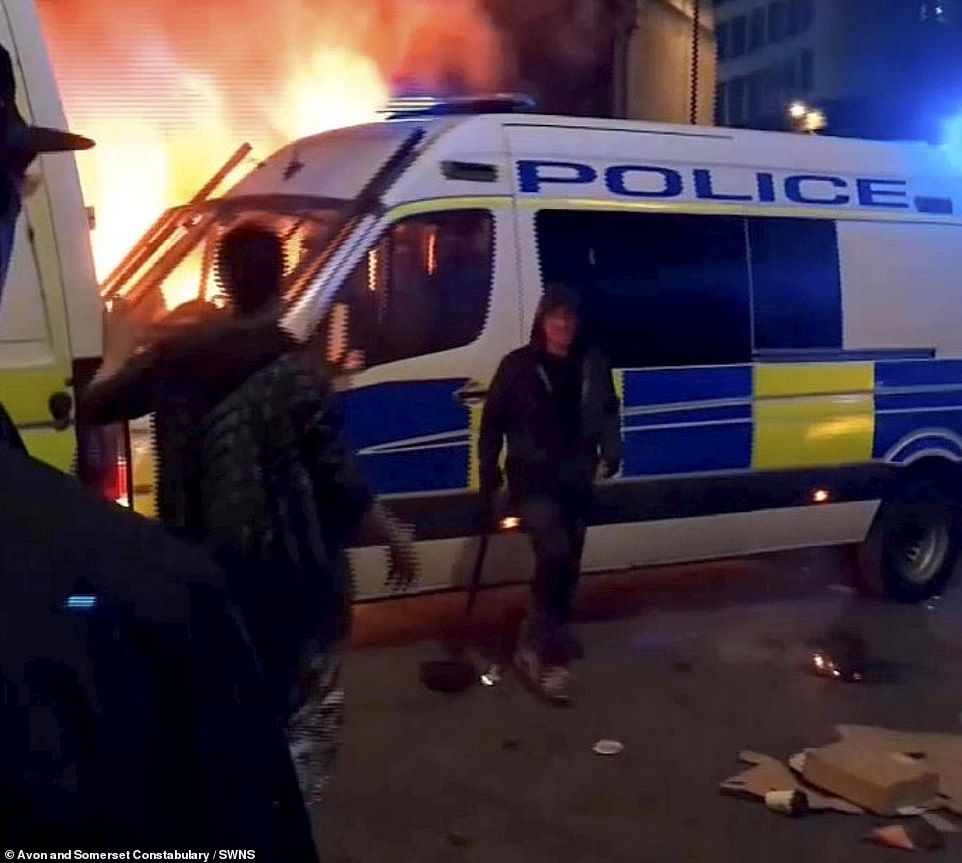 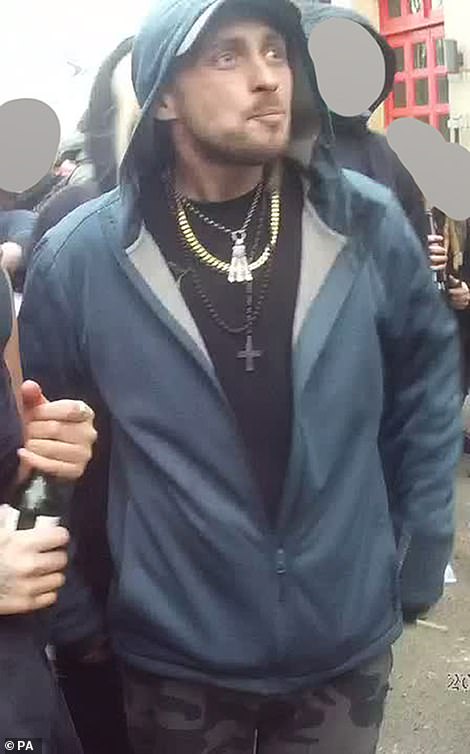 ‘I want to make it clear. Peaceful protestors will be given the opportunity to disperse, but Bristol will not tolerate violent behaviour and we’re here to prevent it.’

Earlier in the week Avon and Somerset Police released photos of people they wish to trace over the disorder.

Yesterday they released footage of a lit item being placed underneath a police van, with an officer still inside, along with a picture of the man police would like to identify in connection with the incident.

The footage was released on the same day Avon and Somerst Police retracted claims that two officers had suffered broken bones amid the carnage.

A spokesman for the force told ITV: ‘At the time the Chief Constable did interviews on Monday morning, it was believed the officer may have suffered broken bones and a punctured lung.

‘Following further medical assessment, this was deemed not to be the case – but this officer’s injuries were serious enough to result in hospital treatment and a CT scan.

‘A second officer also suffered a suspected broken arm, but on further assessment this too was thankfully found not to be the case.’

An officer has described first hearing on the radio how colleagues were being injured outside the Bridewell police station.

They said: ‘I was aware from the radio that my colleagues were under attack outside the front of Bridewell police station where damage had been caused. 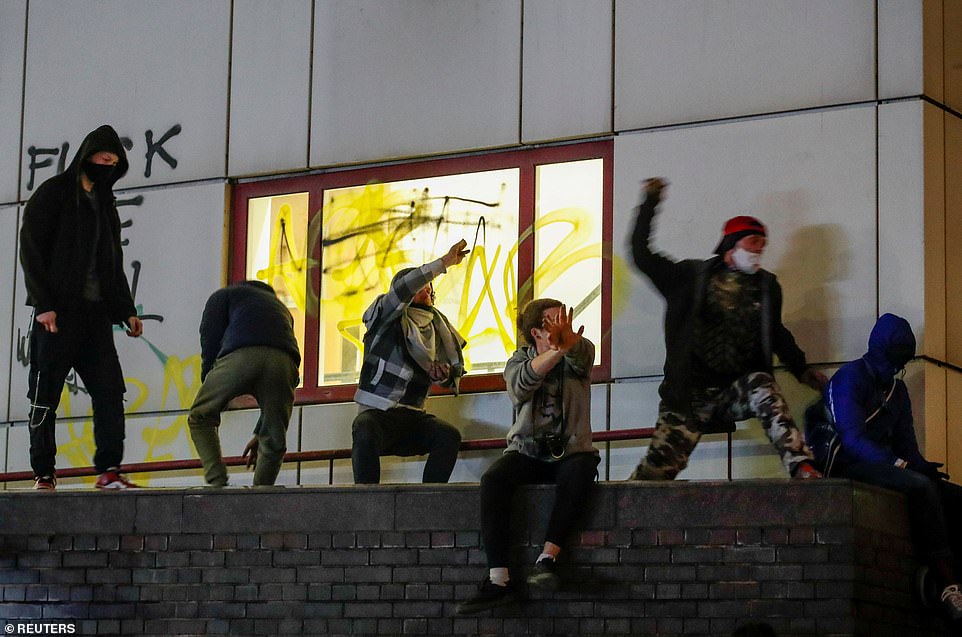 Urging people to stay at home, Ch Supt Armes said: ‘This is about public health and public safety at a time of pandemic’ 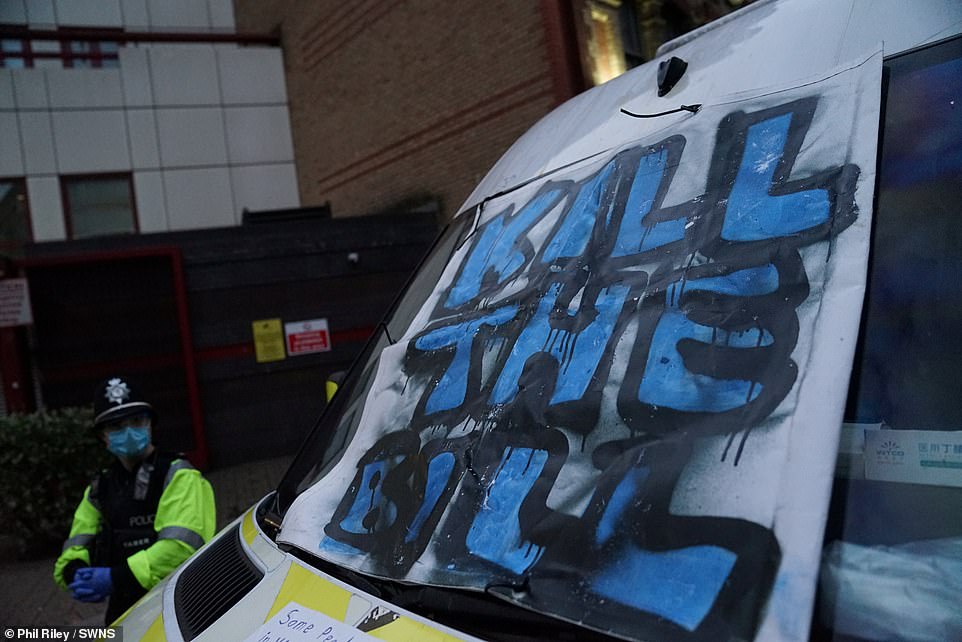 Protestors are calling for an end to the Police, Crime, Sentencing and Courts Bill, which could see additional measures created to crackdown on demonstrations 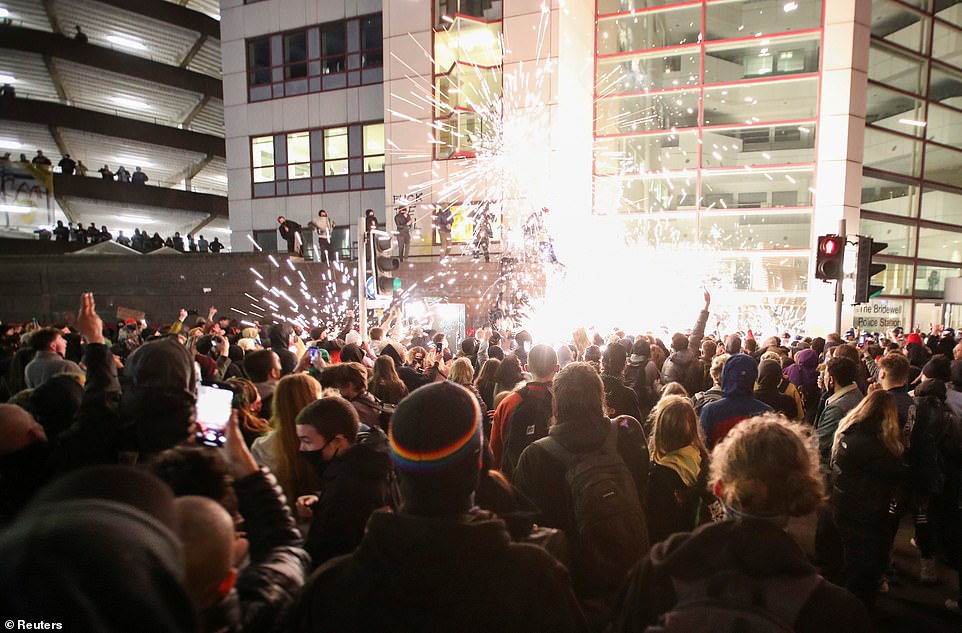 Around 3,000 protestors gathered at Sunday’s demonstration, with fireworks let off in the street and little room for social distancing 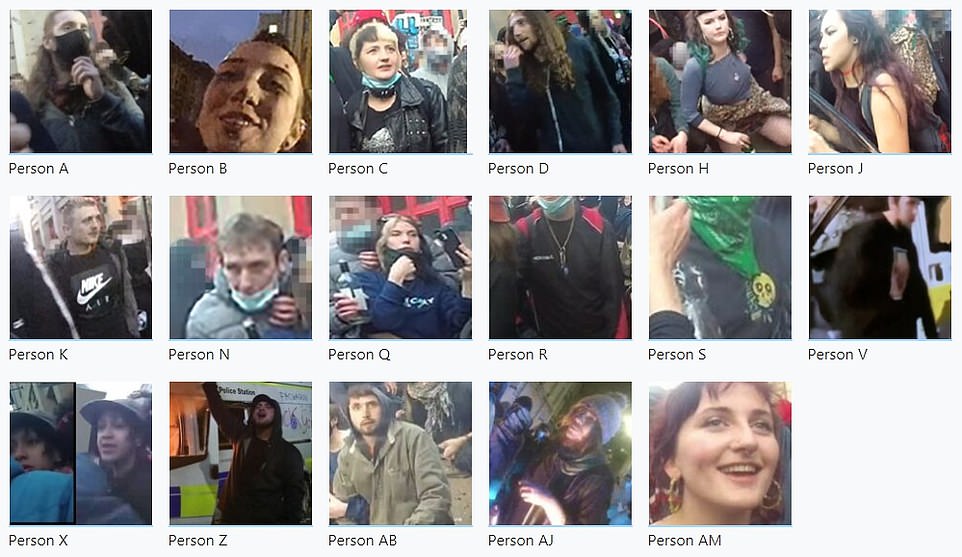 ‘I could hear screaming and shouting from the officers as they were being attacked – a call was made for vehicles to be used to assist officers.

‘The only way to protect my colleagues was to place the vehicle across, side on, in front of them to offer protection.

‘There were glass bottles, rocks as big as fists, pallets, fences and other objects strewn across the road and being used against the police.

Ch Supt Carolyn Belafonte, who is overseeing the investigation into the disorder, said: ‘This officer’s account is just one of many we’ve gathered from our colleagues at the scene of this terrifying incident.

‘It’s upsetting to hear how colleagues feared for their lives that night and it strengthens our resolve to bring all those responsible to justice. 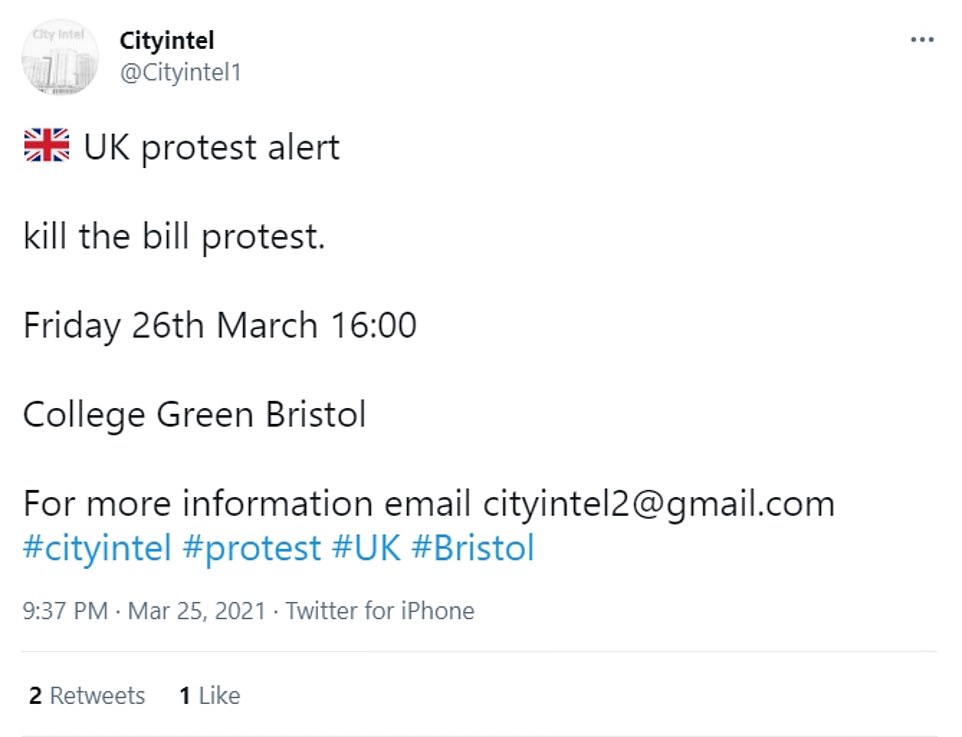 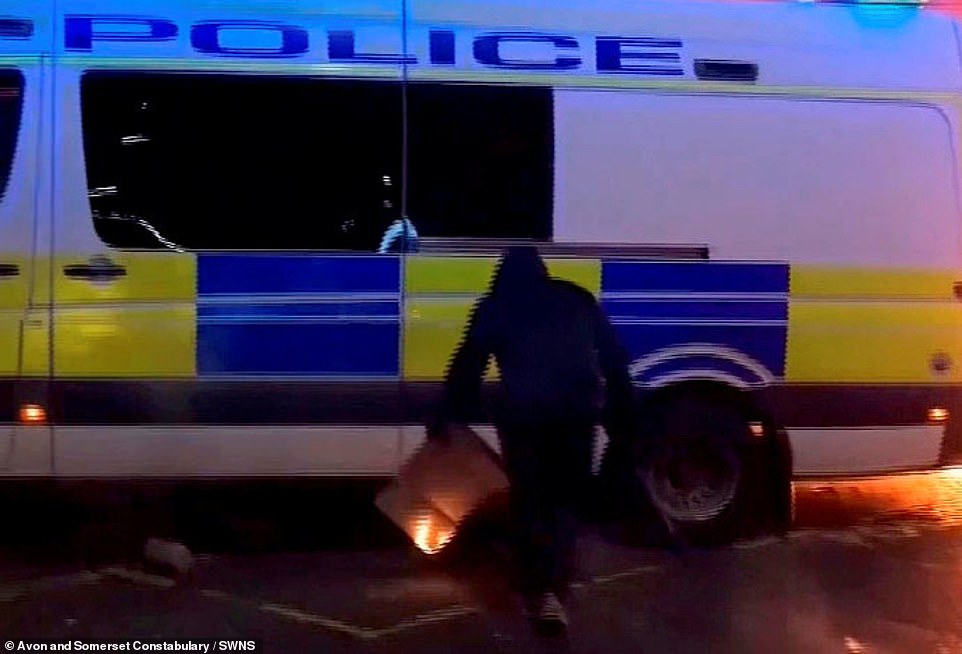 Newly released footage, taken during the violent ‘Kill the Bill’ disorder in the city on Sunday, shows the moment a lit item was placed under a police van while a police officer was inside

‘Our investigation is continuing at pace but it is painstaking work.

‘Our online gallery, which currently has 18 images within it, has been viewed more than 80,000 times since it was launched – and we’ve received more than 200 calls and around 280 evidential submissions from the public to date.. This is a phenomenal response and we’re grateful for every piece of information.

‘I would ask people to look at the latest image we have released and call us if you know who it is – or you can provide information via a dedicated form on our website.’