Travellers living next to the Dale Farm site say they want to leave but cannot sell the land dubbed ‘Britain’s biggest flytip’ a decade after police and bailiffs fought a £7million eviction battle.

Neighbouring travellers on a legal site by the infamous plot near Basildon, Essex, say they have ‘had enough’ of the town and want to move on.

But because the land is worth so little and may have ‘up to 60 owners’, the plan is proving increasingly difficult.

At its height more than 1,000 were people living there, but now it is a desolate wasteland. 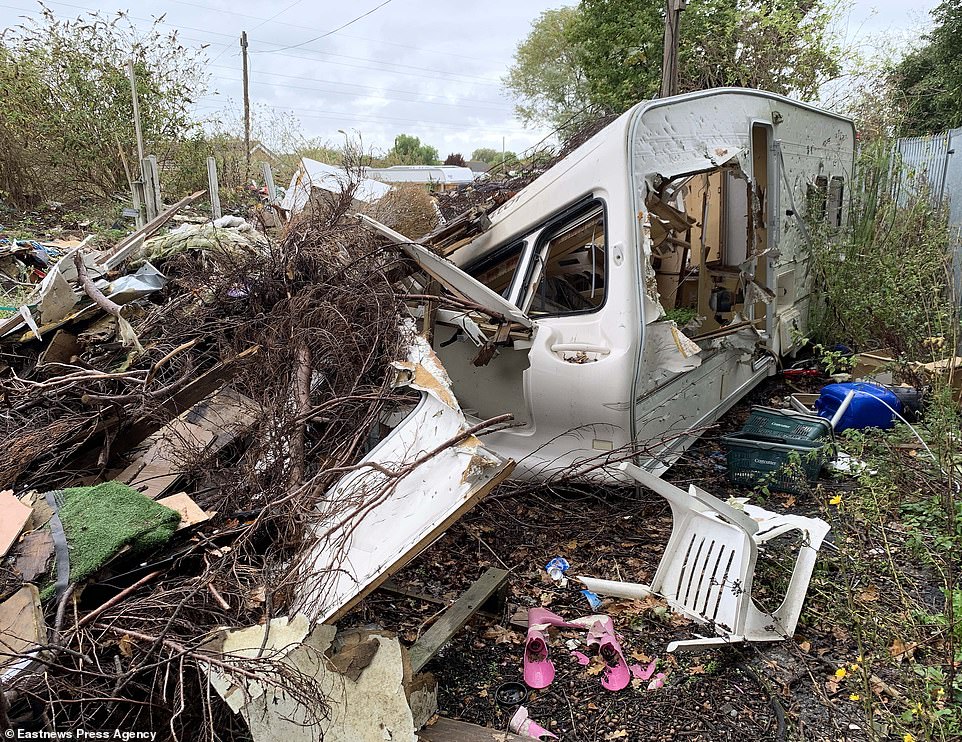 Neighbouring travellers on a legal site by the infamous plot near Basildon, Essex, say they have ‘had enough’ of the town and want to move on. Pictured: the remains of Dale Farm, which cost taxpayers £7million to clear in 2011 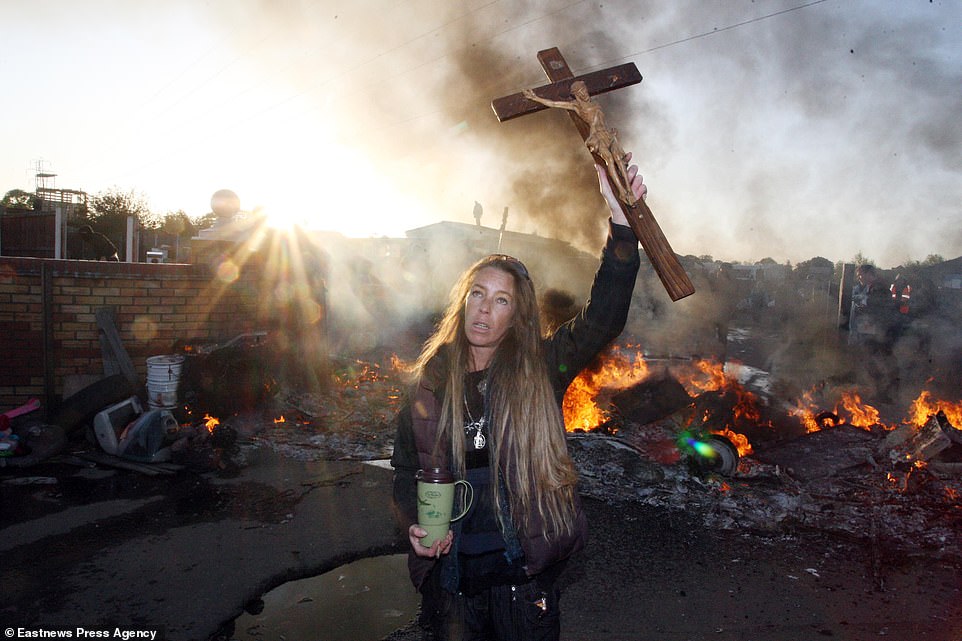 Dramatic scenes from the eviction in 2011. The site was once Europe’s biggest illegal traveller site and had more than 1,000 people living there at its height, but now is a desolate wasteland dubbed ‘Britain’s biggest flytip’ 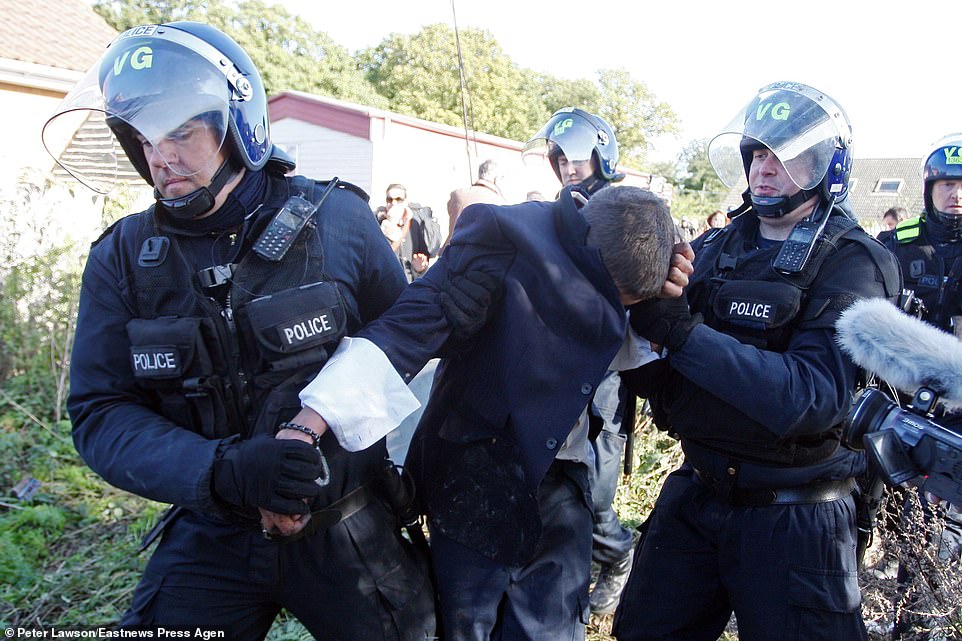 Police officers pictured during the Dale Farm eviction in 2011. The final cost of the eviction was nearly £7million, with Basildon Council picking up a bill for £4.3million whilst Essex Police spent £2.4million on their involvement 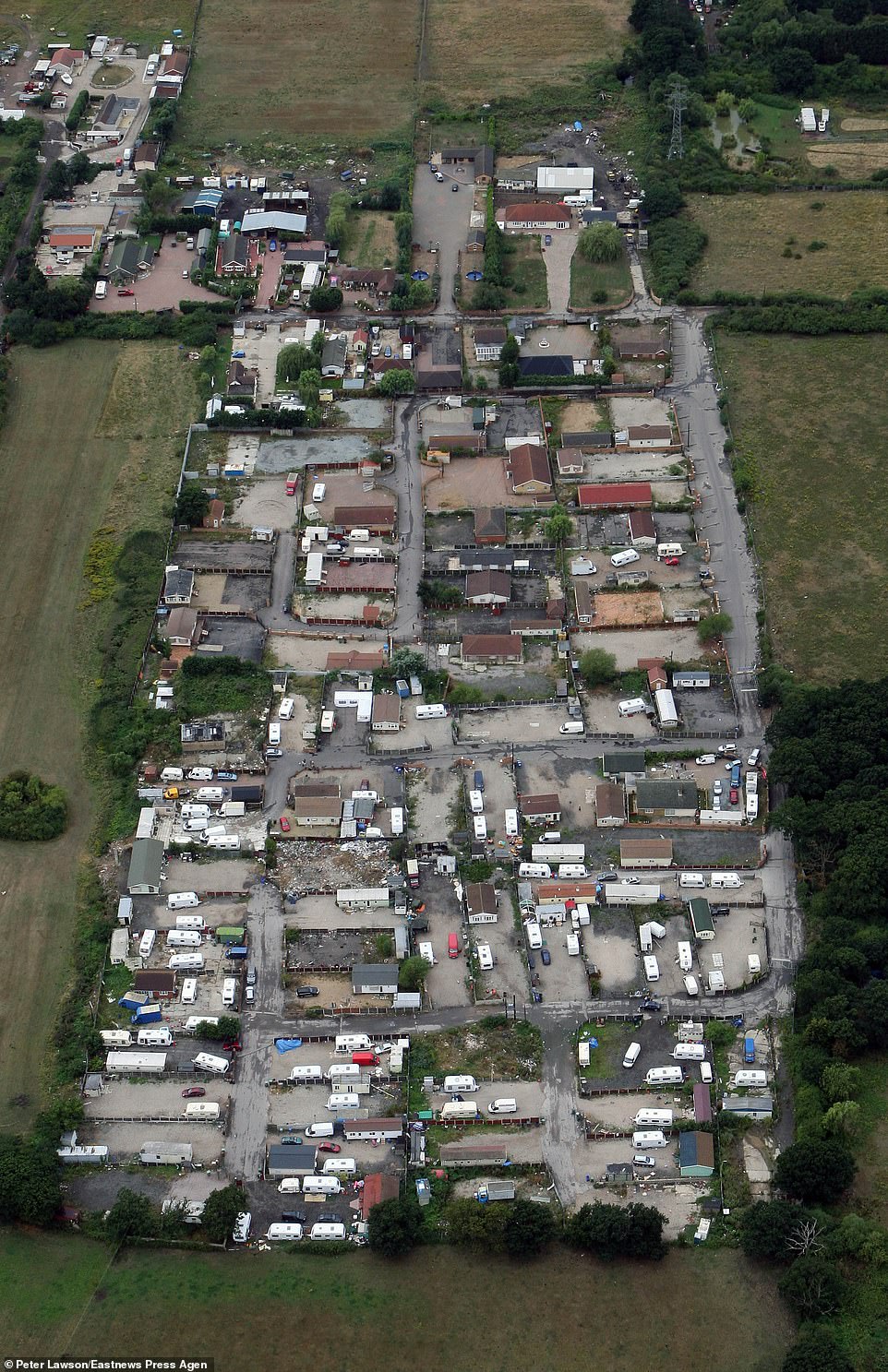 A file picture showing the whole of the Dale Farm site in Basildon, Essex, before the eviction. Travellers living next to the site say they want to leave but cannot sell the land

Officials claimed it would be returned to Green Belt land after the eviction battle in October 2011 – but it is still a polluted wasteland blighted by rubbish and the decaying remains of the site.

Now the legal travellers who live on the neighbouring Oak Lane pitches say they want to sell up, and hope a developer swoops in to develop the area for housing.

Stuart Carruthers, who represents the group in court, says the 400 travellers want to leave South Essex.

He said: ‘I’m expecting it to be turned into houses at some point and the sooner they do that the better. But there are so many issues they are facing.

‘They are struggling to sell the land, it’s so cheap. The only reason they settled there was because the land is so cheap.

‘The travellers are more than happy to move on, if they get the money for it, otherwise they can’t afford to buy anywhere else. 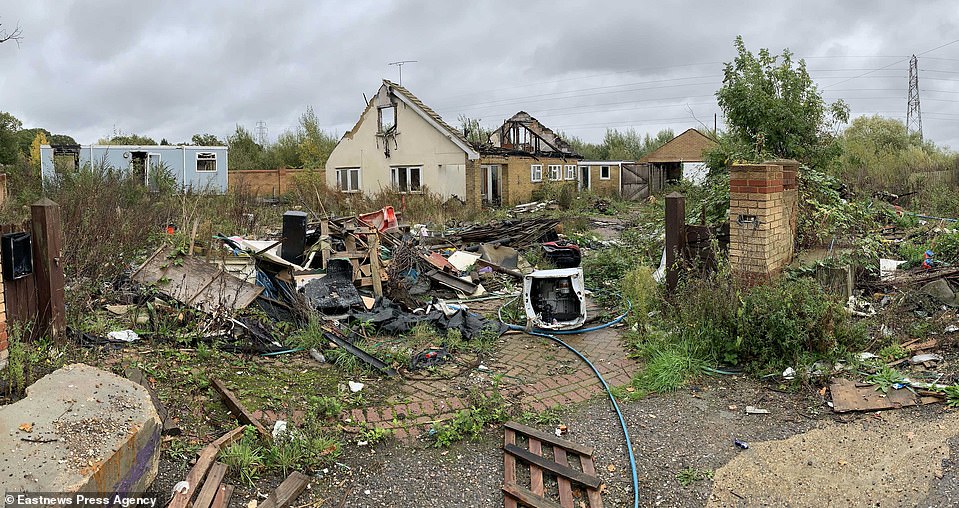 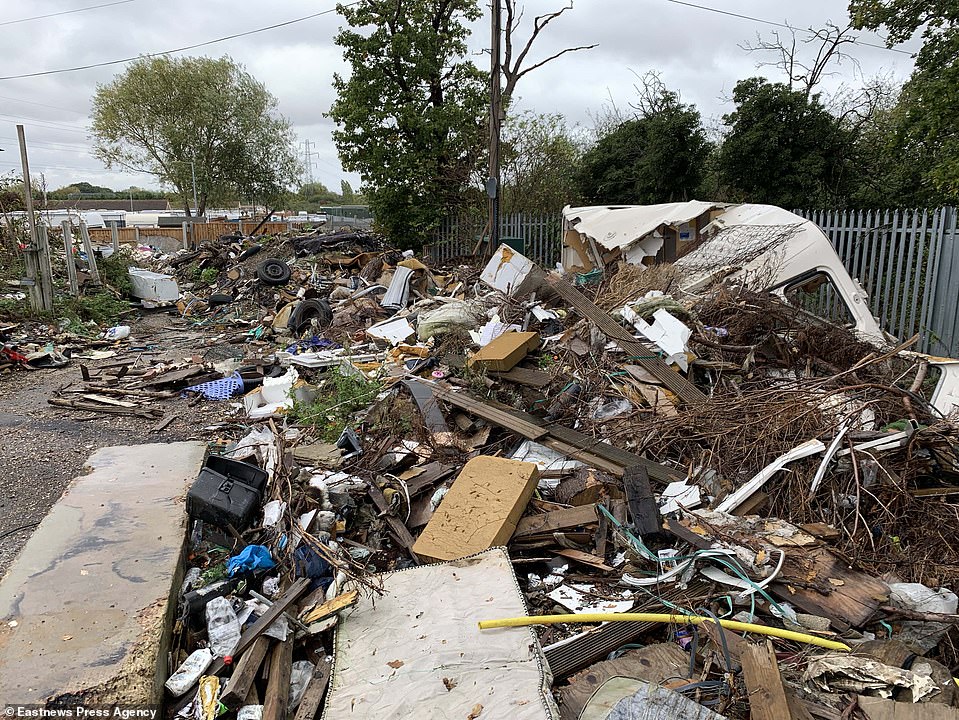 A mound of rubbish can be seen at the site in 2019 including a tool box, mattress, and various pieces of wood and other debris

A large amount of rubbish on the site. Now the legal travellers who live on the neighbouring Oak Lane pitches want to sell up 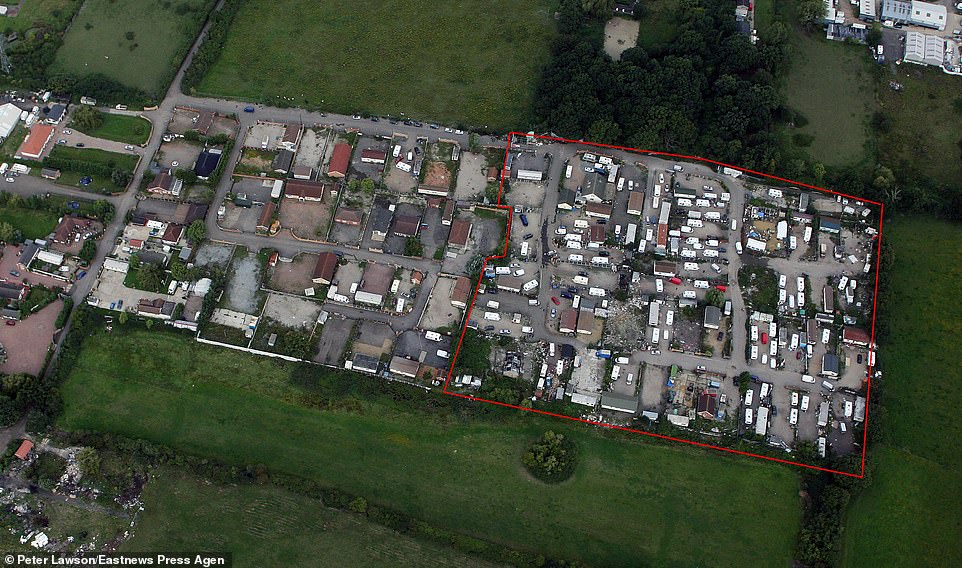 ‘I think they’ve had enough of Basildon, they just don’t like the town anymore. No one is going to build the homes until a developer comes along and buys it.’

However, any plans for housing would be stymied by ‘serious highway problems’ as the site is near the busy A127 dual carriageway.

Officials have poured cold water on the plans to develop it with the deputy leader of Basildon Council, Kerry Smith, saying it is not their decision.

He said: ‘We don’t know who owns the land. It is down to the landowners, with what they want to do with it. 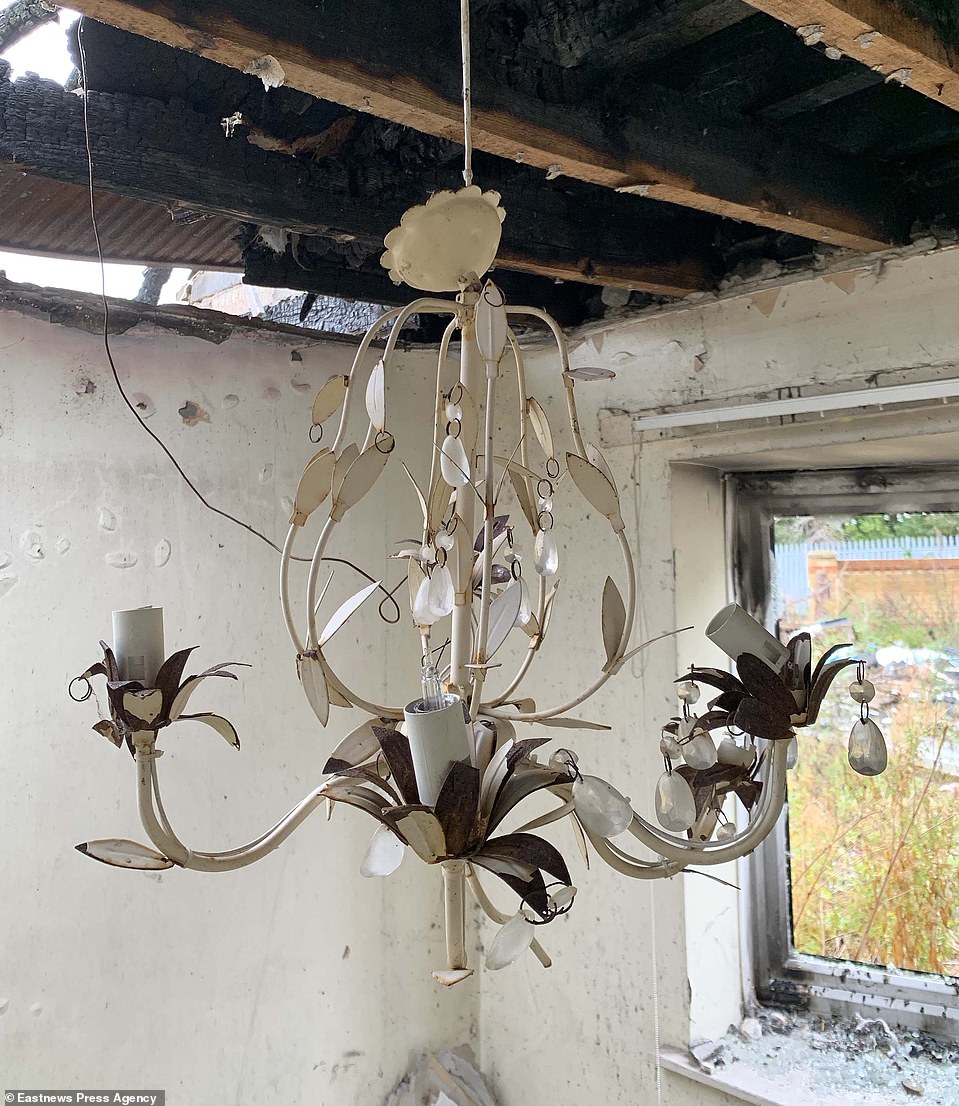 An internal shot of a burnt out illegal home on the former traveller site in Essex. Smashed glass can be seen on the right 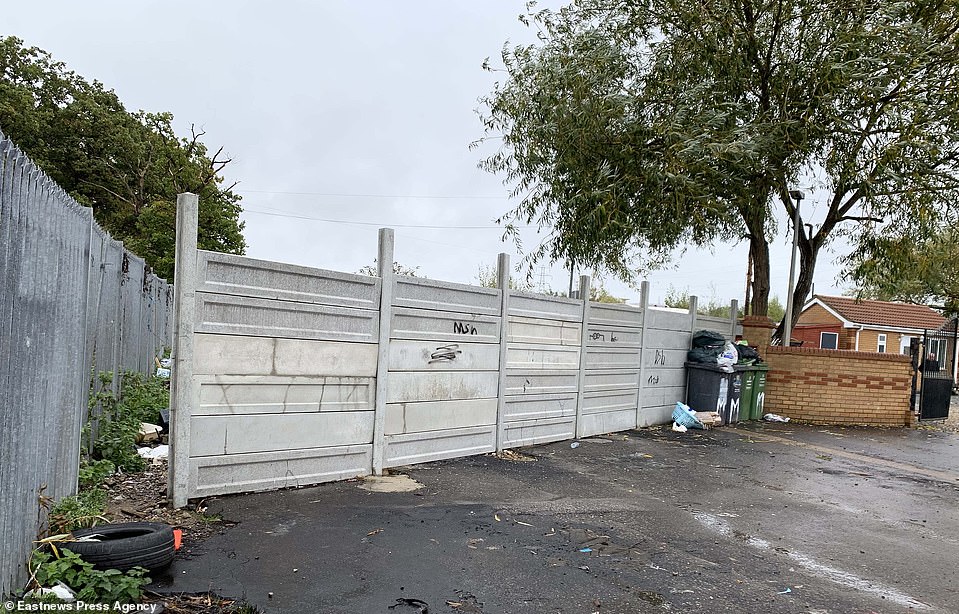 A barrier to stop fly tippers going into the site and dumping rubbish. In 2018 it emerged Basildon Council had failed to recover a single penny from the travellers 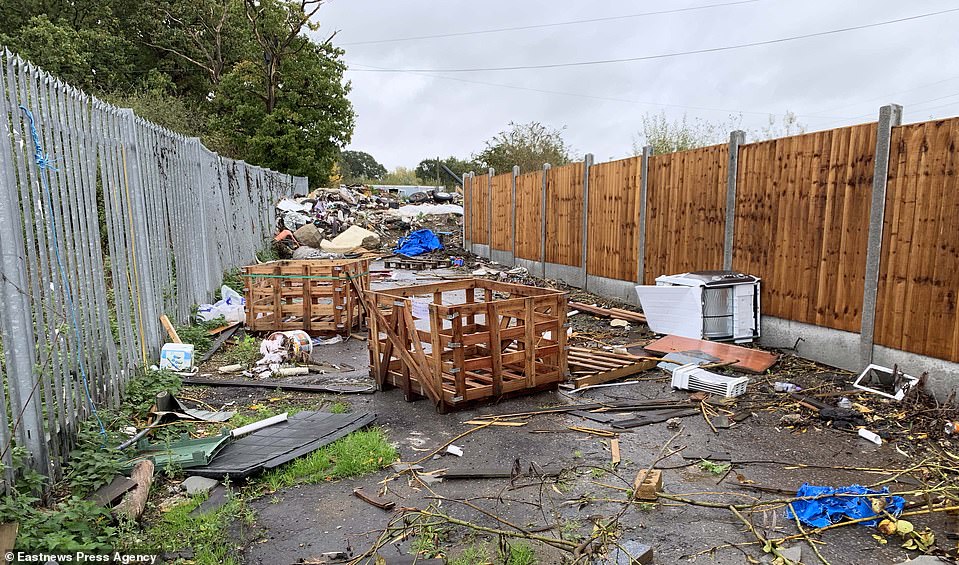 A number of wooden crates at the site, and what appears to be a fridge on the far right hand side of the alley, pictured in 2019. Further rubbish can be seen in the background of the shot 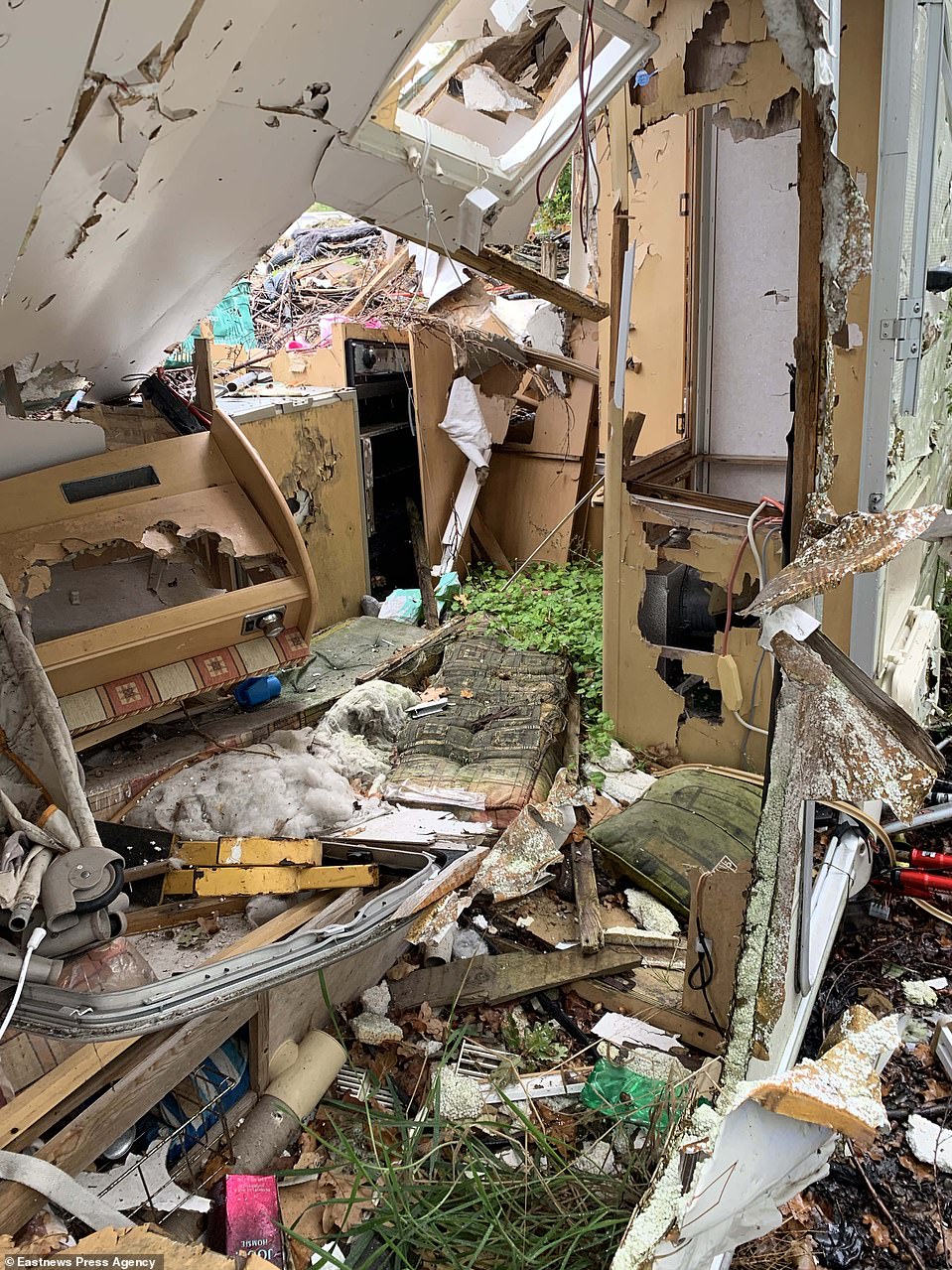 ‘They need to come together and go through the local plan process and put some recommendations forward. The council is still owed money from the evictions. I think that figure sits around £4million.

‘If the council waived that money then I’m sure the landowners will then want to do something.’

The final cost of the Dale Farm eviction was nearly £7million, with Basildon Council picking up a bill for £4.3million whilst Essex Police spent £2.4million on their involvement.

In 2018 it emerged Basildon Council had failed to recover a single penny from the travellers.

A ‘lack of information about landowners whereabouts’ had stalled plans to claw back the cash and official documents recommended ‘no further action’ should be taken.

1960s: Small numbers of travellers begin to settle alongside the Dale Farm site, part of which was authorised as a scrapyard.

1990s: The site has grown to 37 plots authorised by Basildon Council.

May 2005: Travellers are ordered to leave Dale Farm after a planning inspector declares the development illegal. Basildon Council votes to bring enforcement action.

June 2005: Actor and political activist Corin Redgrave suffers a heart attack while speaking at a Basildon Council meeting discussing the future of Dale Farm. He describes travellers as ‘the most deprived community in the country’. 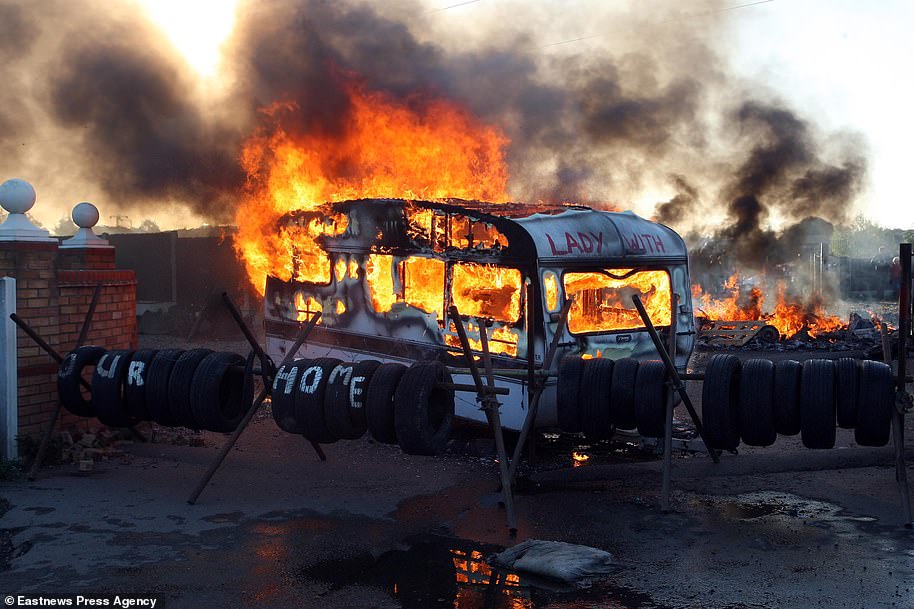 Dramatic scenes from the Dale Farm eviction in 2011, showing a caravan covered in graffiti and set on fire 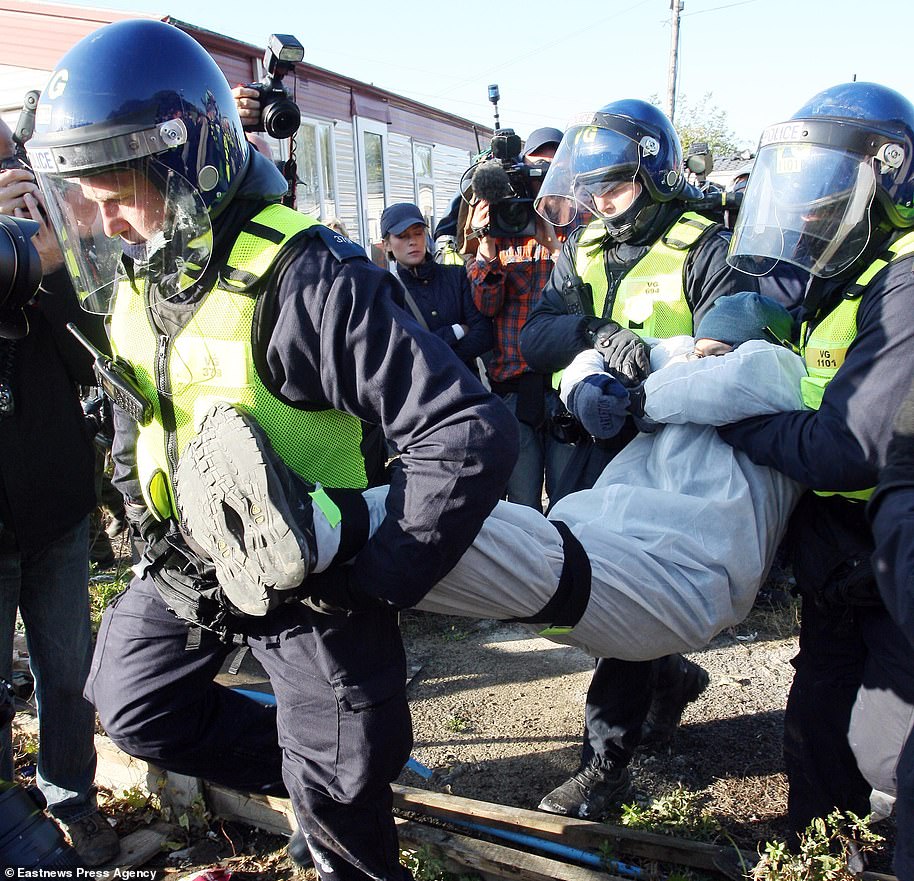 May 2006: Dale Farm travellers hold a vigil outside Westminster as the Government discusses new guidance on gypsy and traveller sites.

December 2007: The Save Dale Farm Campaign appeals for a rethink following a Basildon Council ruling to hire eviction specialists and bulldoze the site.

May 2008: Travellers celebrate the opening of a new community centre despite continuing court action from Basildon Council to allow the eviction to go ahead.

January 2009: The Court of Appeal rules that an earlier judgment in the High Court – which quashed Basildon Council’s decision to take enforcement action – was flawed. Lord Justice Pill said the decision to clear the site was lawful.

March 2011: Basildon Council votes for a fresh resolution to clear Dale Farm. Officials estimate the eviction will cost more than £18 million. The Government agrees to part-fund the council and police operations. 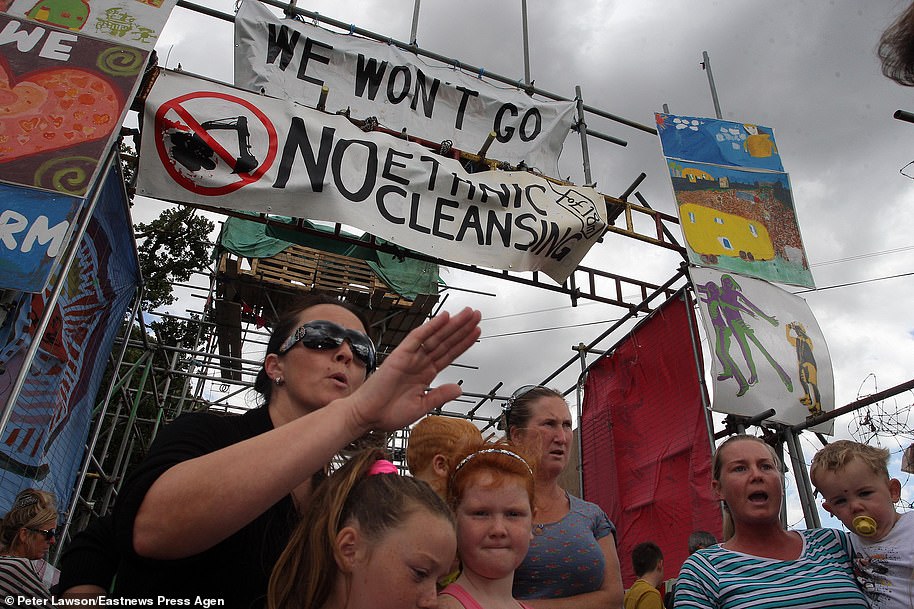 September 5 2011: The date for the beginning of the clearance is revealed as September 19. Travellers criticise the council after the date was leaked to the media before they were informed.

September 16 2011: Elderly resident Mary Flynn given a final chance to challenge the clearance of the site.

September 18 2011: Supporters and travellers resisting the clearance of Dale Farm lock down the site as they prepare for the arrival of bailiffs. 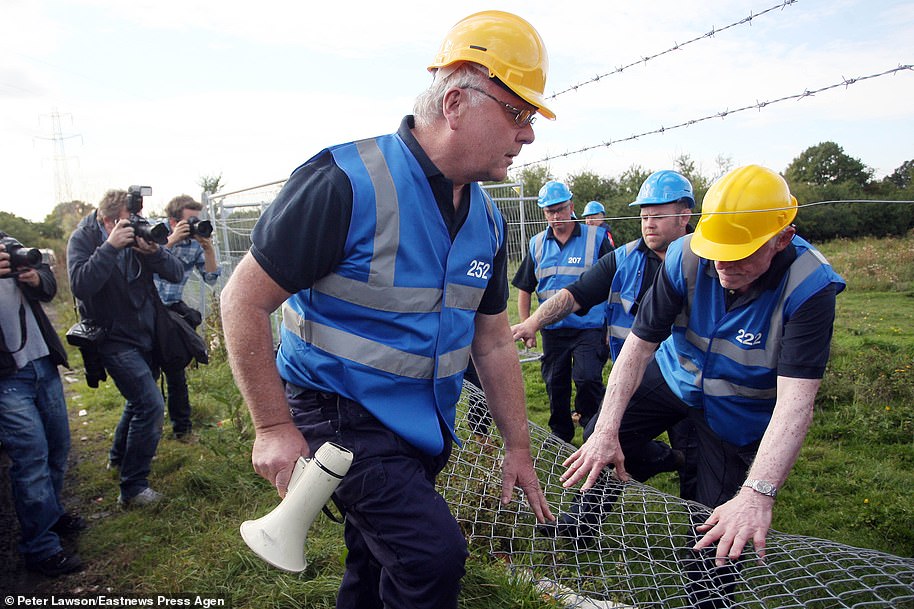 Officials pictured taking down fencing during the eviction in 2011

September 19 2011: Bailiffs arrive at the main gate of Dale Farm to start the eviction of up to 80 families living on the unauthorised plot. Later, the residents win a last-gasp injunction preventing the council from clearing structures.

September 21 2011: Travellers flee the site amid fears of eviction. A group of travellers claiming to be from Dale Farm relocate to a public park in Luton.

September 26 2011: Residents win a temporary reprieve. A judge rules that residents are entitled to an extension of an injunction stopping their evictions until the courts have ruled on the legality of their proposed removal.

October 17 2011: Residents refused permission to appeal against a High Court ruling that gave Basildon Council the go-ahead to evict them.

October 19 2011: Supporters clash with bailiffs and riot police as the planned eviction finally gets under way.

Kate Middleton must follow ‘elevated’ fashion rule when flying as a...

Meghan was 'advised' to be 'half herself' after joining the Royal...