‘I don’t think I’m allowed to see my own grandchild’: Danny Dyer reveals he might not be able to meet daughter Dani’s first baby due to lockdown

By Nicole Conner For Mailonline

Danny Dyer has revealed he is ‘very upset’ that he won’t be able to join daughter Dani in hospital or meet her first child due to lockdown as she nears her due date.

The EastEnders actor, 43, told of his sadness at potentially being unable to meet his first grandchild that the Love Island star, 24, is expecting with boyfriend Sammy Kimmence, 24.

Speaking on the father-daughter duo’s Sorted with the Dyers podcast on Wednesday, he said: ‘You know, I’m a little bit concerned because you’re having a pandemic kid. 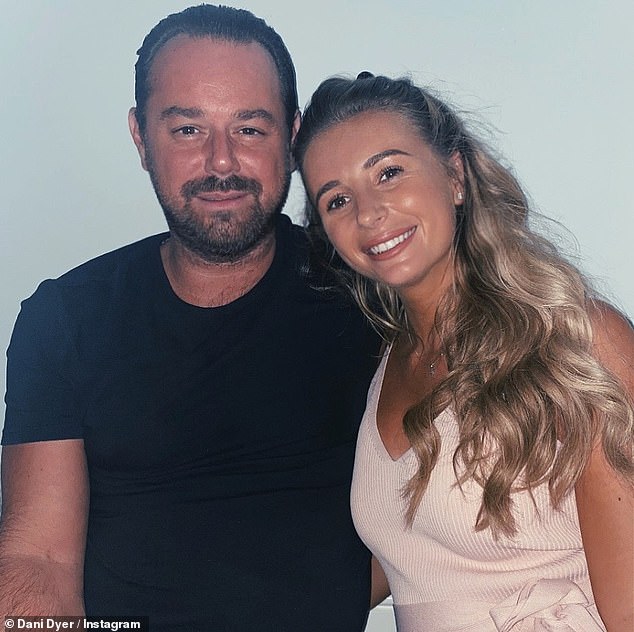 Sadness: Danny Dyer, 43, said it was ‘very upsetting’ that he might be unable to see his daughter Dani’s first child due to coronavirus restrictions (pictured together)

‘Which means that rules out me going up the hospital. And I’m so confused with the support bubble thing, I don’t think I’m allowed to see my own grandchild.’

The mother-to-be asked if he believed he wouldn’t be able to see her first baby, and her father answered: ‘If Boris has his way, then no. And that is very upsetting for me.’

The former Love Island winner has been planning for the imminent arrival of her first child with boyfriend Sammy.

Speaking on the Spotify podcast, she told her father about her final pregnancy preparations, including sorting her bag for the hospital, and the pair joked the baby had been in too long. 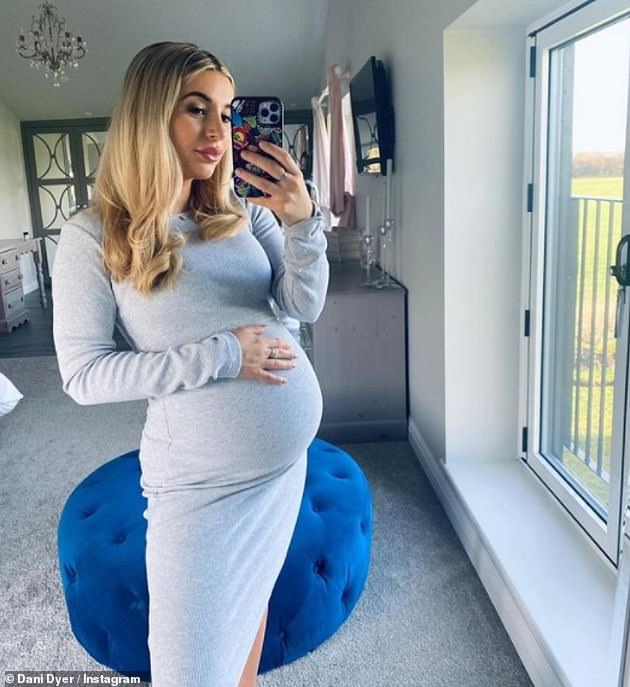 Restrictions: Danny Dyer told his pregnant daughter Dani (pictured) that he won’t be able to join her in the hospital when she gives birth

The mother-to-be said: ‘You know what Dad, I’ve been packing my ‘go’ bag!’

Her father asked: ‘Oh go on, what’s a “go” bag?’ And Dani replied: ‘So basically, it’s my hospital bag for the baby.’

The actor then teased his daughter about how long she had “held the baby in”, calling her selfish for keeping them waiting.

He said: I think you’ve been slightly selfish holding this baby in for as long as you have.’

Dani said: ‘I feel like this baby is too comfortable.’ 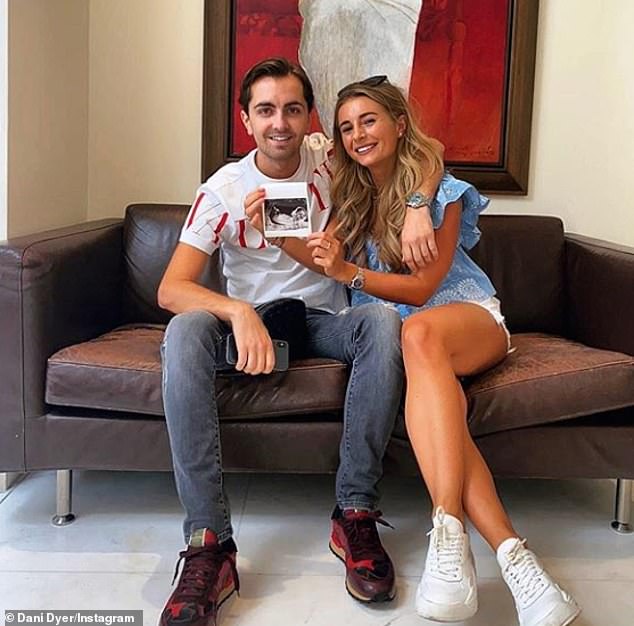 Not long to go now: Dani is preparing for the imminent arrival of her first child with her boyfriend Sammy Kimmence, 24

Earlier this month, she shared details of her preparations for giving birth, including showing all of what will be packed into the hospital bag.

On Tuesday, Dani confessed that she’s ‘starting to lose sleep with anxiety’ as she excitedly – and nervously – counts down the days until her baby’s arrival.

She took to Instagram to share video of the baby’s nursery, which she branded ‘the best room in the house’, and got candid about her feelings as she awaits impending motherhood.

Dani wrote: ‘Starting to lose sleep with anxiety as baby’s coming so so soon now, (watching the night stalker also didn’t help me at all!) anyone else feel like this? 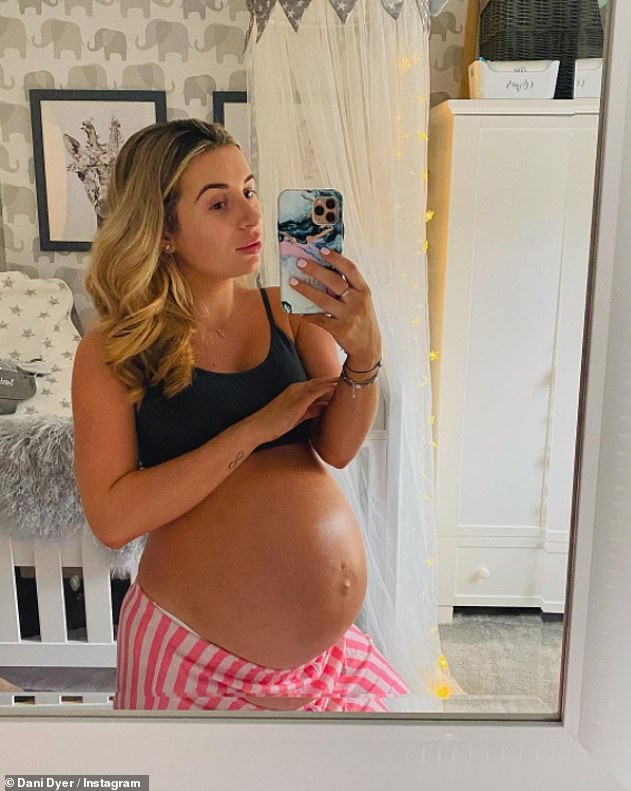 Mum-to-be: The Dyers are currently preparing to welcome the latest addition to their family, with Dani’s due date quickly approaching

‘I’m so excited but so nervous at the same time, keep thinking am I organised, am I missing something, is there anything else I can do all these emotions going round in circles haha. Counting down the days.’

Dani and Sammy announced they were expecting their first child together in July 2020, just three months after rekindling their relationship following a brief separation.

The reality star ended the couple’s then 10-month romance amid claims her boyfriend’s court case for scamming two elderly men out of £34,000 had put ‘a strain on their relationship’.

The pair grew close again during the first lockdown after Sammy ‘begged’ the reality star to spend time with him. 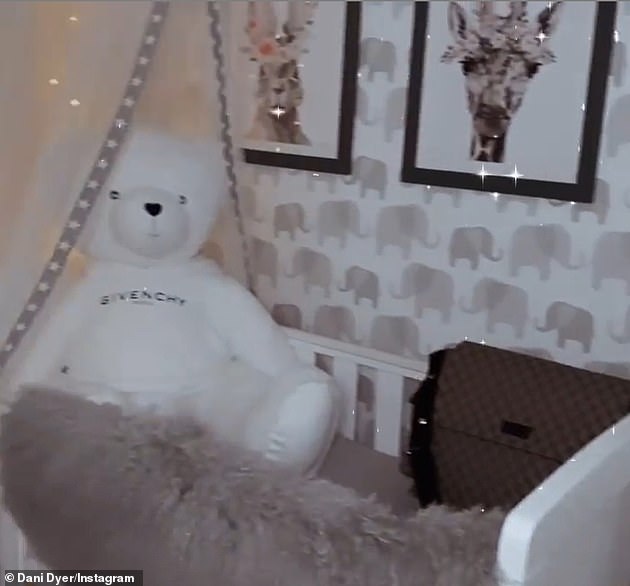 Eddie Murphy reveals his favourite ever character that he's played

Eddie Murphy reveals his favourite ever character that he's played

Meet the man who says sex can help you build a...