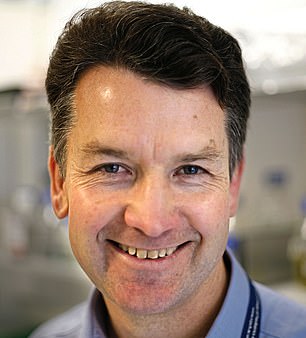 The Novavax coronavirus vaccine will ‘probably’ still be effective if the second dose is delayed by up to 12 weeks, its head researcher says.

Professor Paul Heath argued ‘basic immunological principles’ suggested the longer gap would not make the jab – up to 90 per cent effective in trials – any less potent.

But he warned there was no data to prove this because trial participants received their second dose four weeks after their first.

Britain’s regulator is set to rubber-stamp the jab – already being manufactured in Stockton-on-Tees – within the next four weeks, the scientist added.

They are expected to triple its dosing gap to 12 weeks – as with AstraZeneca and Pfizer jabs – so that the most Britons can be reached in the shortest time possible.

Offical data already suggests the two jabs provide just as good protection after the 12 week delay, despite this not being tested in clinical trials.

Boris Johnson revealed last night that Britain’s 60million Novavax doses will now be packaged at a GlaxoSmithKline factory in Durham amid sabre-rattling from Brussels.

Ministers had initially planned to send them to Europe for ‘fill and finish’, when the precious fluid is put into vials, but the change means they now will not leave the UK.

Novavax is due to submit its late stage trial data to Britain’s medical regulator in the coming weeks and approval is expected in May. It will likely become the fifth Covid jab to be approved in the UK, as Johnson and Johnson’s one-dose jab is already under review. 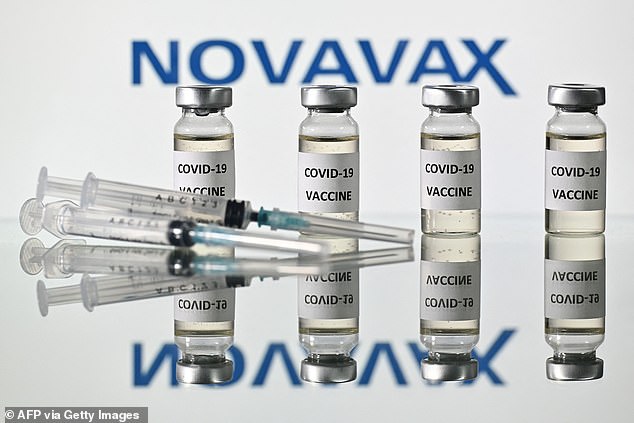 Boris Johnson revealed yesterday that the jabs will now be packaged at a factory in Durham, after it was initially planned for them to be sent to the EU 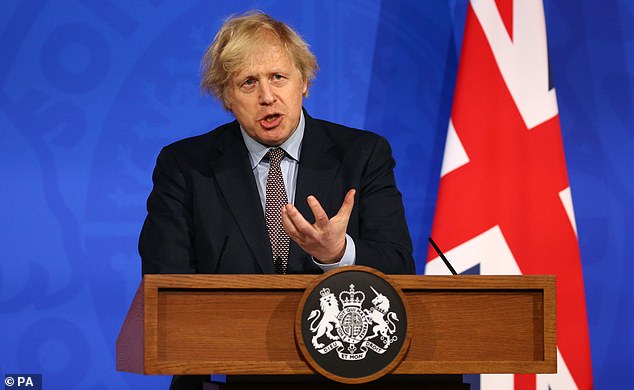 More than 150,000 coronavirus deaths have been recorded in Britain since the pandemic began, official figures revealed today.

Announcing the grim milestone, the Office for National Statistics revealed 150,116 death certificates between the start of the pandemic and March 19 mentioned the virus.

But other promising figures showed weekly Covid deaths fell below 1,000 in England and Wales for the first time since October. And no excess deaths were recorded for the second week in a row, with fatalities from all causes down 8 per cent on the five-year average.

Covid deaths have been in a downward spiral since the second wave peaked in January, when almost 1,500 virus victims were being recorded every day. For comparison, the figure has now dropped to below 100.

Britain has suffered the worst Covid death toll in Europe, and the fifth worst in the world, since the virus emerged in December 2019. Experts say this is linked to the rapid spread of the more infectious Kent variant in December, as well as the failure to protect care homes during the first wave.

Boris Johnson is hoping the mass vaccination drive — which has jabbed more than 30million Britons — will fend off any further waves of the virus. But scientists warn the emergence of new variants that may be able to dodge vaccine-triggered immunity could dent the roll-out.

Professor Heath, who is also the director of the vaccines institute at St George’s, University of London, said it would be ‘fine’ if the gap between doses was widened.

‘The answer is we don’t know because we haven’t looked at studies where the two doses have been separated by more than three to four weeks,’ he told Sky News.

‘(But) from basic immunological principles I think it probably would be.’

He added: ‘We know from other vaccines that we can extend the interval between doses and do so with confidence.

‘So if we needed to for this vaccine, I’m sure extending that interval would be fine from the point of view of its effectiveness.’

The Novavax jab teaches the immune system to make antibodies against Covid’s spike protein – which it uses to invade cells.

It contains miniscule replicas of the spike protein – made from tiny nanoparticles – which, when injected into the body, trigger an immune response.

This means that should someone encounter Covid in the future, their body is primed to fend it off.

Trials showed it was 89.3 per cent effective at stopping symptomatic Covid infections in volunteers in the trials.

It was also 60 per cent effective against the South African variant, which scientists are worried could dodge vaccine-triggered immunity and cause a third wave.

But experts working on the trial said this was a ‘good result’ and showed other jabs would also likely offer some protection against this variant.

They pointed out too

Mr Johnson said yesterday the decision to get GlaxoSmithKline to package the Novavax jabs will ‘further boost our vaccine roll-out’.

‘I’m delighted by GSK’s investment, which shows the strength of UK manufacturing, and will further boost our vaccine rollout,’ he told a Downing Street press conference yesterday.

‘The vaccines taskforce has worked hand in glove with business to successfully deliver vaccines to the whole of the UK and this agreement will continue to support our approach.

‘We remain on track to offer a first jab to all over-50s by April 15, and all adults by the end of July, and I want to once again encourage everyone to come forward for a vaccine when you’re called.’

Britain already has enough doses on order from AstraZeneca and Pfizer alone to vaccinate the entire nation with two doses.

But officials anticipate ‘booster’ shots will need to be given annually to the elderly and vulnerable because immunity wears off quicker in those groups.

Novavax coronavirus vaccine – everything you need to know

The Government has agreed a deal with pharmaceutical giant GlaxoSmithKline (GSK) on the manufacture of up to 60 million doses of the Novavax coronavirus vaccine.

Here is what we know:

– How does the vaccine work?

The Novavax vaccine works like other vaccines by teaching the immune system to make antibodies to the coronavirus spike protein.

Researchers inserted a modified gene into a virus, called a baculovirus, and allowed it to infect insect cells.

Spike proteins from these cells were then assembled into nanoparticles which, while they look like coronavirus, cannot replicate or cause Covid-19.

These nanoparticles are then injected into the body via the vaccine where the immune system mounts an antibody response.

If the body encounters coronavirus in the future, the body is primed to fend it off.

The vaccine is given as two doses.

– Are there advantages of the Novavax vaccine?

Yes. While the jabs from Pfizer/BioNTech and Moderna need to be kept at ultra-low temperatures, the Novavax jab is stable for up to three months in a normal fridge.

– How effective is the vaccine?

According to results of a phase three trial in the UK, announced in March, the jab offers 100 per cent protection against severe disease, including all hospital admission and death.

In participants 65 years of age and older, 10 cases of Covid-19 were observed, with 90 per cent of those cases occurring in the placebo group.

The protein antigen component of the vaccine is produced in the North East of England by Novavax manufacturing partner, Fujifilm Diosynth Biotechnologies, at its site in Billingham, Stockton-on-Tees.

GSK announced on Monday that it will provide ‘fill and finish’ manufacturing capacity – preparing vials of the final vaccine and packaging them for distribution and use – at its Barnard Castle facility, also in the North East, beginning as early as May.

It said the ‘rapid technology transfer’ between the two companies will begin immediately.

– Has the Novavax vaccine been approved?

Not yet. A rolling review is under way by the (Medicines and Healthcare products Regulatory Agency) MHRA to assess the vaccine.

Britain already has enough doses on order from AstraZeneca and Pfizer alone to vaccinate the entire nation with two doses.

But officials anticipate ‘booster’ shots will need to be given annually to the elderly and vulnerable because immunity wears off quicker in those groups.