A desperate single mother is raffling off her two-bedroom flat for just £2.50 a ticket in order to create a ‘fresh start’ and more space for her two young children.

Single mother Wendy Grace, 31, an account manager for a technology firm, is selling her the two-bedroom flat in Aylesbury, Buckinghamshire, where she lives with her two children Imogen, eight, and Lenny, five, who share a bedroom.

While house raffles have become a popular way for owners to make a profit to fund a new lifestyle, Wendy is desperate to be closer to family support and to have more room for her children.

After struggling to sell the flat amid the Covid-19 pandemic, Wendy decided to raffle her 680 square foot flat so she can buy her ‘dream’ three-bedroom home with a garden for her children to play in. 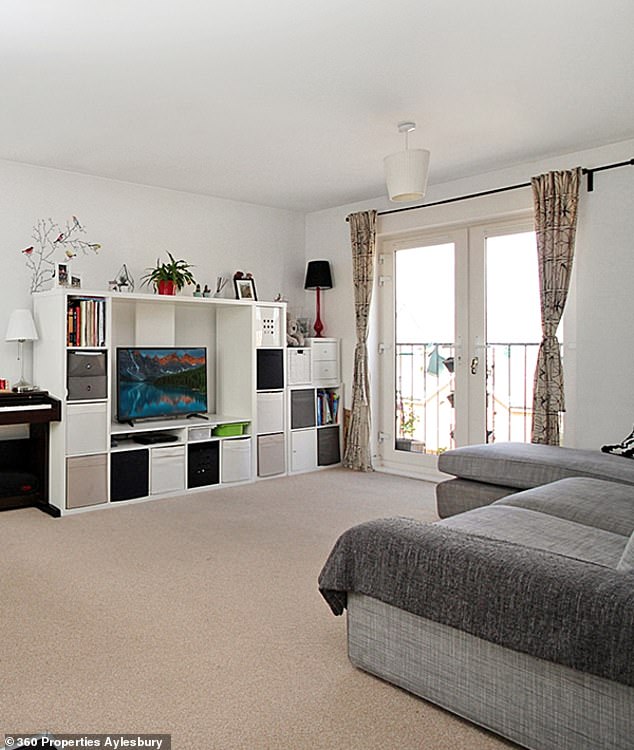 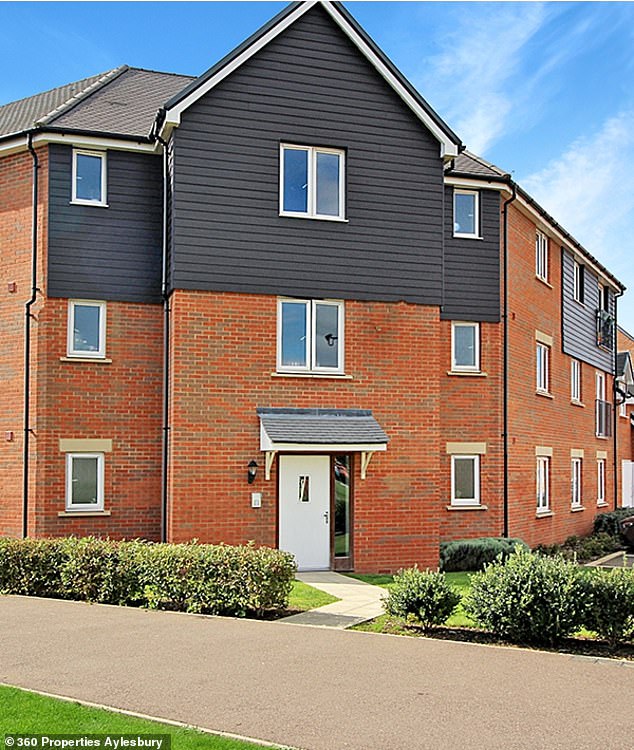 Single mother Wendy Grace, 31, is raffling off her two-bedroom flat (pictured) for just £2.50 a ticket as she needs a ‘fresh start’ and more space for her two young children 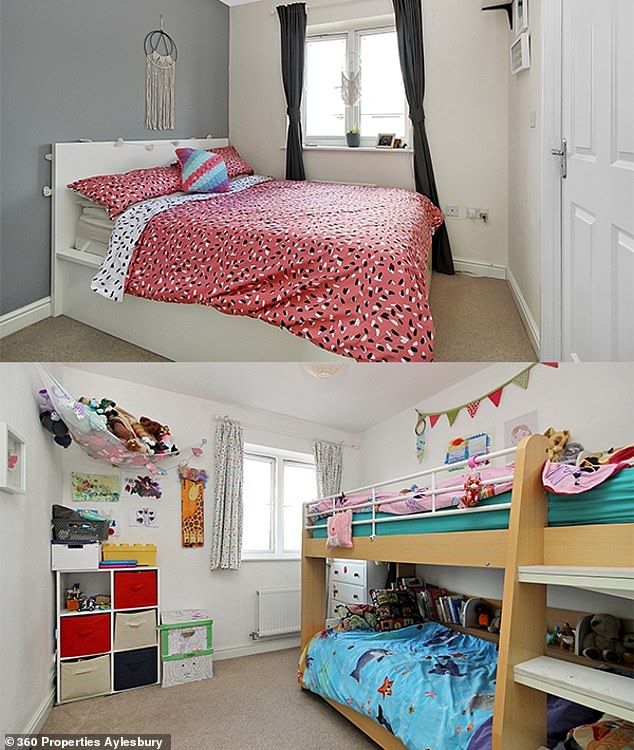 The flat is located in Aylesbury, Buckinghamshire, and boasts two bedrooms (pictured above), two bathrooms and is approximately 680 square foot

They have currently sold around 43,000 tickets but need to sell a further 47,000 by 9pm on Saturday, otherwise Wendy will be unable to move house. Legal fees and a year of service fees are also covered as part of the prize.

The single mother, who separated from her husband four-and-a-half years ago, admitted she feels ‘trapped’ and ‘claustrophobic’ in her flat and needs a ‘fresh start’ because it was her martial home.

‘I felt trapped, that’s the word to summarise it, I felt really trapped, not just by lockdown but by being in a property I don’t want to be in, feeling like we are claustrophobic.

‘And it’s a fresh start, this is the marital home I bought with my ex-husband six years ago, so there’s so much to it. It’s a very much-needed move.’ 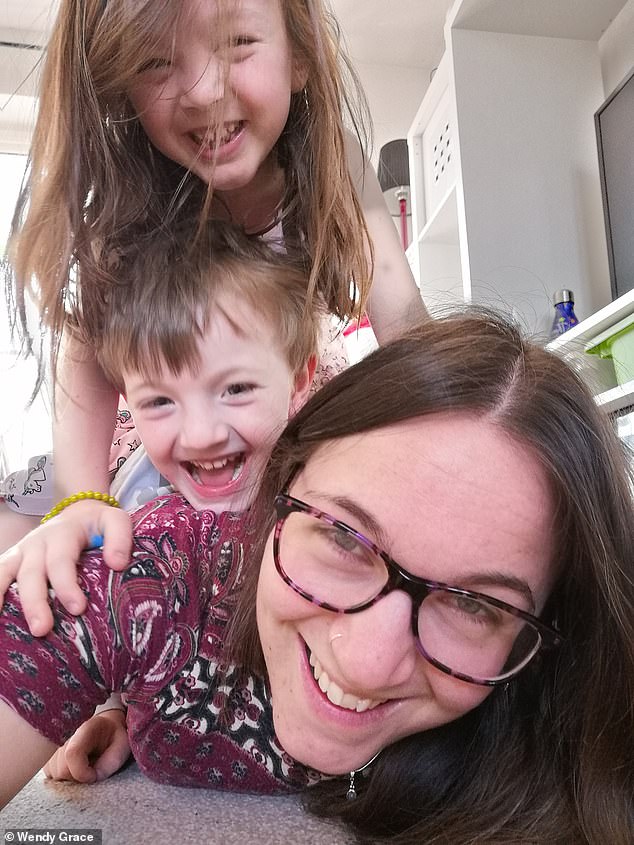 After struggling to sell the flat amid the Covid-19, Wendy decided to raffle her home so she can buy her ‘dream’ three-bedroom home for her children Imogen, eight, and Lenny, five (pictured) 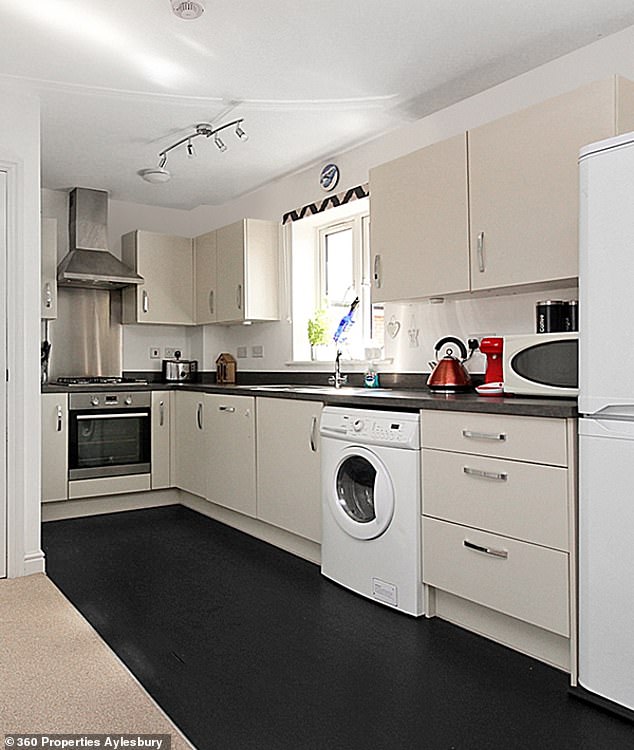 The property is an ideal option for first-time buyers, boasting a large kitchen space with fashionable built-in cream cabinets.

An open-plan living room area is also a generous size with large double doors which let in plenty of natural light.

The flat has two generously sized bedrooms; the main bedroom is spacious enough for a double bed, while the second bedroom is a sizeable single room, or could equally function as a study area.

Wendy admitted that it has been challenging being a single parent amid the pandemic as she has been juggling working-from-home with homeschooling her two children.

She said that it would make a huge difference not to live an hour away from her twin Di and she plans to look for a property around fifteen minutes from her sister in Oxfordshire so she can get extra support.

She continued: ‘I can’t put into words how hard being a single parent is in the best of times and the last year, it has been incredibly hard.

‘Just having someone nearby that can help me get the kids if you know I need to have my work commitment, just to be able to share that load, just to have someone to help in the evenings – to go and have dinner with someone.

‘My support bubble is nearly an hour away, if I move I am trying to get fifteen minutes away so I can just have that bubble and that easy support.

‘Someone who can go to the shops, I’ve been in isolation before where it’s not been easy to get someone to go and get something from the shops for me, those sorts of things. It’s honestly life-changing, for us it would be.’ 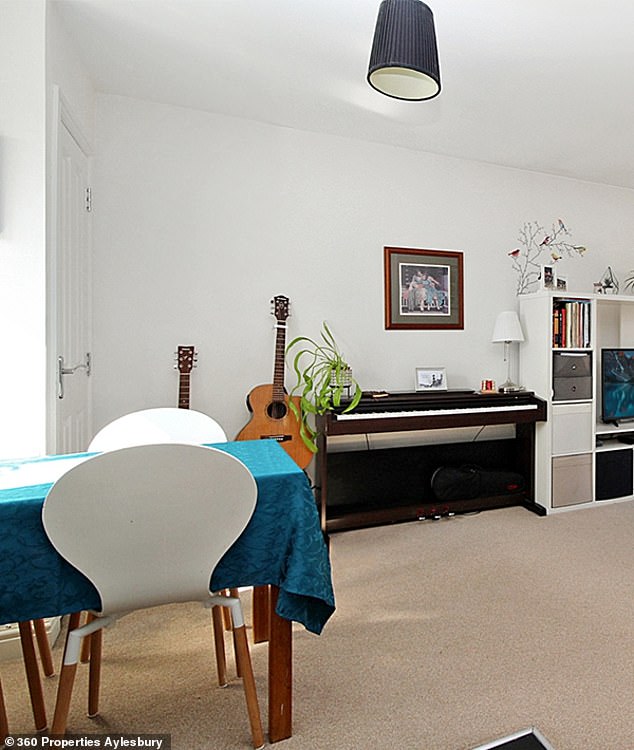 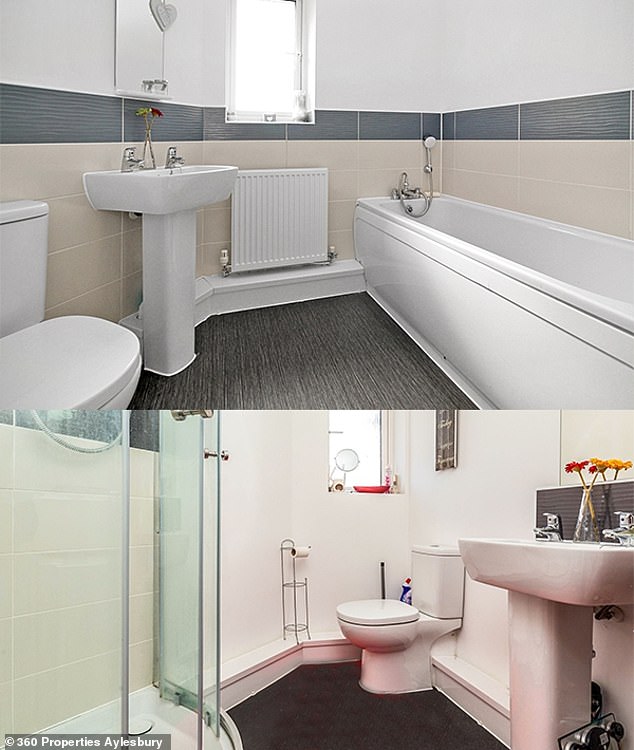 Wendy is living in the two-bedroom property with her two children, who currently share a bedroom, and the mother said they have ‘outgrown’ the home while all three of them have been working and studying in one room.

She decided to try to raffle her home after struggling to sell the home during the Covid-19 pandemic, explaining that many first time buyers who were interested in the flat were unable to get mortgages approved.

Wendy said she needed to secure the full property value in a sale due to moving house on a single salary, but struggled to do so in the ‘current Covid economy’.

She explained: ‘We have outgrown the space completely, we’ve been homeschooling, working full-time, everything all in one living space and it’s really taken its toll on us now so absolutely desperate to move on to a new property and it’s been really hard work, really, really hard work.

‘So a raffle seemed like, let’s give this a go because it seems like a win-win – someone gets to win it mortgage-free, for the first-time buyers who haven’t been able to buy it, but we then get to move on to the three-bed that we need.

‘I’m also currently without family and friends directly near me, so I’m trying to get closer to my support network as well because it’s been a tough year, and it’s ongoing.’

Wendy said her son Lenny’s school bubbles consist of 120 to 150 students and she has had multiple occasions when he has had to return to homeschooling due to one student contracting Covid, meaning she has to juggle looking after him with her job.

The mother said her dream is to get a three-bedroom house with a garden so that Lenny and Imogen can play ‘freely’ outside, without her having to take them on a walk for fresh air. 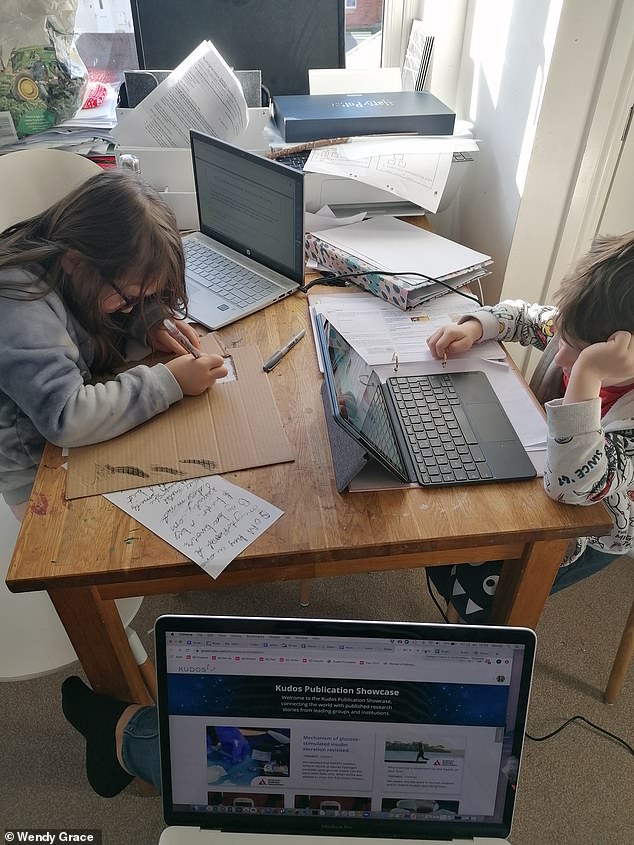 Wendy is living in the flat with Imogen and Lenny, who currently share a bedroom, and said they have ‘outgrown’ the home while all working and studying in one room (pictured) 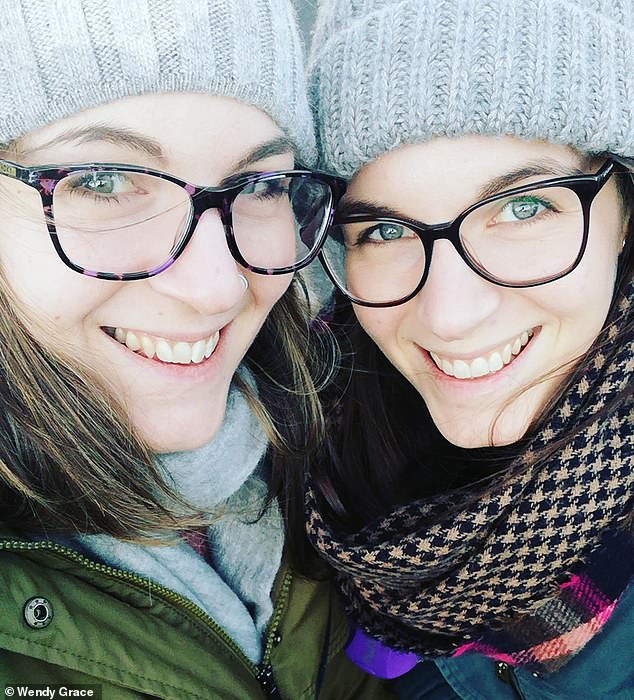 Wendy currently lives an hour away from her twin Di, 31, (both pictured) and she plans to look for a property around fifteen minutes from her sister in Oxfordshire

She continued: ‘The dream is a three-bed house with a garden, I keep envisioning myself in the kitchen, looking out at the garden, doing the washing up – the most mundane tasks but for me it’s just a simple dream.

‘Just to see the kids playing in the garden, they are very outdoorsy children, so just to see them playing out there while I’m cracking on with what I need to do.

‘At the moment, we are just right on top of each other all the time and they are such outdoorsy kids and I can’t let them just play freely outside, I need to go outside with them, lock up the house, go out, go for a walk, come back again – just that would make such a difference to them and to me.’

Explaining the difficulties about selling her home as a single mother, Wendy said that she has to keep her job going as well as looking after her children to be taken ‘seriously’ by mortgage lenders.

She added: ‘Trying to keep a job going so I can be taken seriously by mortgage lenders. 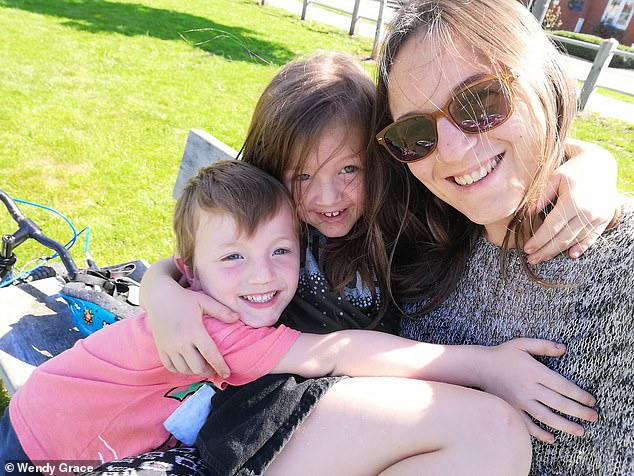 ‘It’s a massive juggle to move on as a single person as in order to be taken seriously you have to work, there’s so much to it, and you have to have enough deposit behind you. So yeah it’s been really tricky.’

Wendy admitted that the knowledge that someone will win either her home or a £75,000 cash prize after spending just £2.50 on a ticket helped to ‘drive’ her to put her house up for raffle.

She said: ‘Someone is going to win £75,000 for a £2.50 ticket which is amazing really and that is absolutely driving me to know that. Obviously the dream is to move on, we are desperate to move on and really, really want this to work, but I know that it all will have been worthwhile in that someone is going to win a massive prize whatever happens.

‘Loads of people have reached out and said “this is life-changing, this last year has been so hard for me, I’ve lost my job, my landlord is about to sell my home, I don’t know where we are going to go it’s so stressful”. It’s quite incredible really.’

For more information or to enter, visit: https://raffall.com/166335/enter-raffle-to-win-spacious-2-bed-bath-apartment-hosted-by-wendy-grace