Burglars beware! Scientists have discovered a way to collect human DNA from the AIR around us

By Joe Pinkstone For Mailonline

Animal and human DNA can be collected from the air in a room, scientists have found for the first time.

The technology has the potential to revolutionise the study of elusive animals; contagious diseases, like Covid-19; and forensics.

Air sucked from a room and pumped through an ultra-fine filter was able to capture DNA shed by a person’s body, called environmental DNA (eDNA). 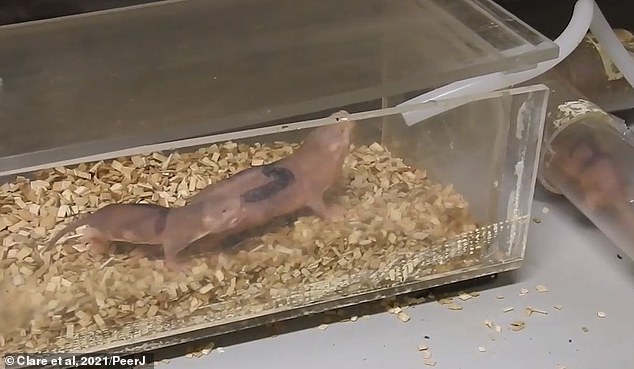 A study, published in the journal PeerJ, looked to see if naked mole-rat DNA could be detected from the air of their lab-based burrows and also the room they are housed in

Environmental DNA has previously been detected in water, soil and snow and used as a way of studying fish, animals and invasive species.

Dr Elizabeth Clare, a senior lecturer at Queen Mary University of London set about determining if eDNA can be filtered from the air.

The study, published in the journal PeerJ, found naked mole-rat DNA from the air of their lab-based burrows and also the room they are housed in.

So-called ‘AirDNA’ was extracted from the filters and successfully sequenced.

Human DNA from the mole-rats’ carers was also identified by the technology, which the researchers say was a surprise but reveals the sensitivity of the technique. 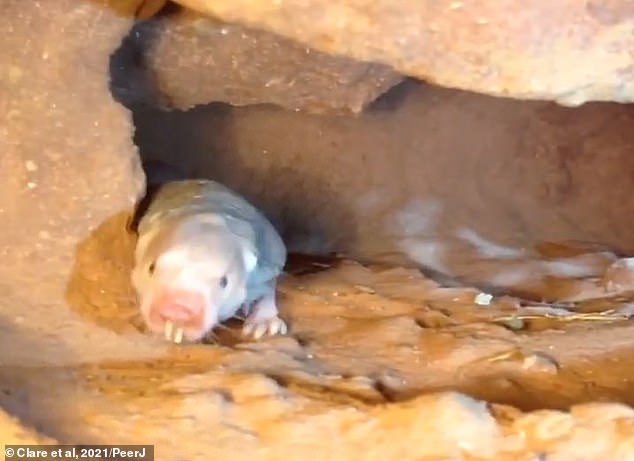 Human DNA from the mole-rats’ carers was also located by the technology, which the researchers say was a surprise result but indicates its sensitivity as a technique 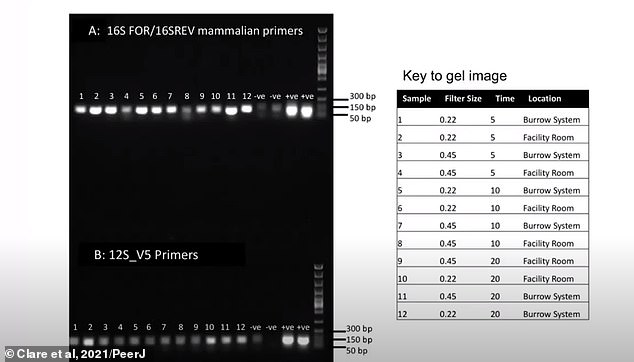 DNA samples captured in the ultra-fine filters were analysed and sequenced, revealing the DNA of the animals

Researchers believe the human DNA is from the carers of the naked mole-rats, despite these people spending far less time in the room than the animals

Dr Clare said: ‘Here we provide the first published evidence to show that animal eDNA can be collected from air, opening up further opportunities for investigating animal communities in hard to reach environments such as caves and burrows.’

She adds it ‘opens up some interesting questions’ about how the technology could be used in forensics or archaeology.

For example, if a criminal is suspected to have passed through a crime scene, analysing the air could reveal their DNA and therefore, their identity.

Also, studying the air of a tomb may be a way to obtain DNA samples of long-dead mummies or skeletons.

But the main use, Dr Clare believes, is in the study of hard-to-reach and shy species.

The emerging technology relies on sucking the air in a room into a filter, and this, Dr Clare says, means it may be harder to obtain DNA from larger room, limiting the scope of the technique as the DNA will be so heavily diluted.

With their wrinkly skin and protruding front teeth, naked mole rats are some of the strangest looking creatures in the animal kingdom.

Now, a new study has revealed that the weird animals also have different languages, which they use to converse with their underground colonies.

Baby mole rats develop the dialect quickly and the colony’s queen — the only breeding female — is responsible for creating and maintaining the accent.

The collective accent helps nurture a feeling of togetherness and boosts cohesion within the unit, according to the researchers from the Max Delbrück Center for Molecular Medicine in Berlin.

Naked mole rats spend their lives underground in vast networks of interconnected tunnels and are blind, relying on squeeks, tweets and grunts to communicate.

Researchers set about listening and deciphering the noises made by 166 individuals from seven colonies held in labs in both Berlin and Pretoria, South Africa.

Over two years the researchers recorded a total of 36,190 chirps and an algorithm worked out the acoustic properties of each one.

Lead author Dr Alison Barker said: ‘We established each colony has its own dialect.

‘The development of a shared dialect strengthens cohesion and a sense of belonging among the naked mole-rats of a specific colony.’