A sweet dog named Picasso who was nearly euthanized after being abandoned because of his ‘twisted face’ has been given a new lease on life thanks to a kind-hearted animal lover who rescued the pup from a high-kill shelter where he would have faced certain death.

Four-year-old Picasso, who lives in Eugene, Ohio, was born with a condition called wry mouth, which causes one side of the jaw to grow more than the other, leading to a distorted look that closely resembles the pieces of art created by his namesake, Pablo Picasso.

The medical condition can happen to a variety of other animal species as well as dogs and doesn’t cause any pain – but it does make it much harder for pets to be adopted. 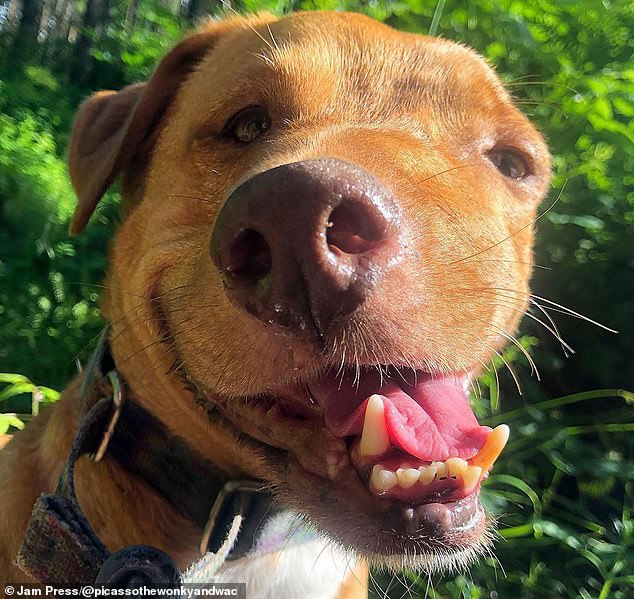 Unique: An adorable pup named Picasso because of his ‘twisted face’ has been saved from certain death at a high-kill shelter after struggling to find a home thanks to his special looks 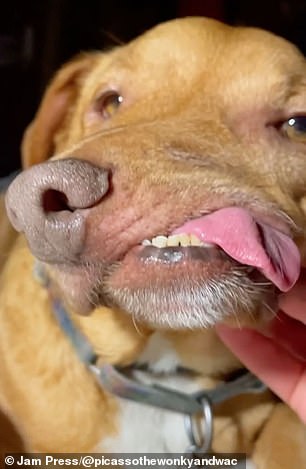 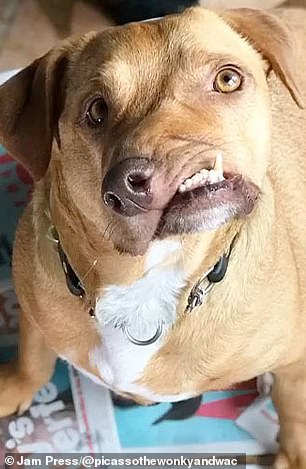 Fighter: Picasso, who is four years old, was due to be euthanized as a result of overcrowding at his California shelter – but was given a new lease on life after being rescued 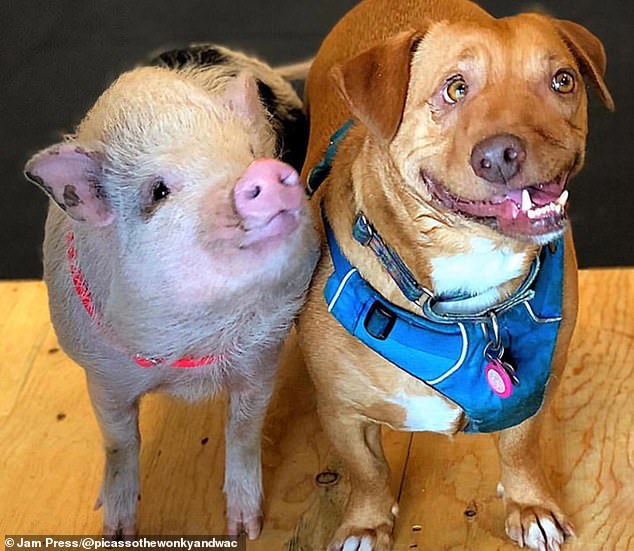 Best friends! The adorable pooch was taken to Ohio-based animal rescue Luvable, where he has formed an unlikely bond with a pot-belly pig named Pax 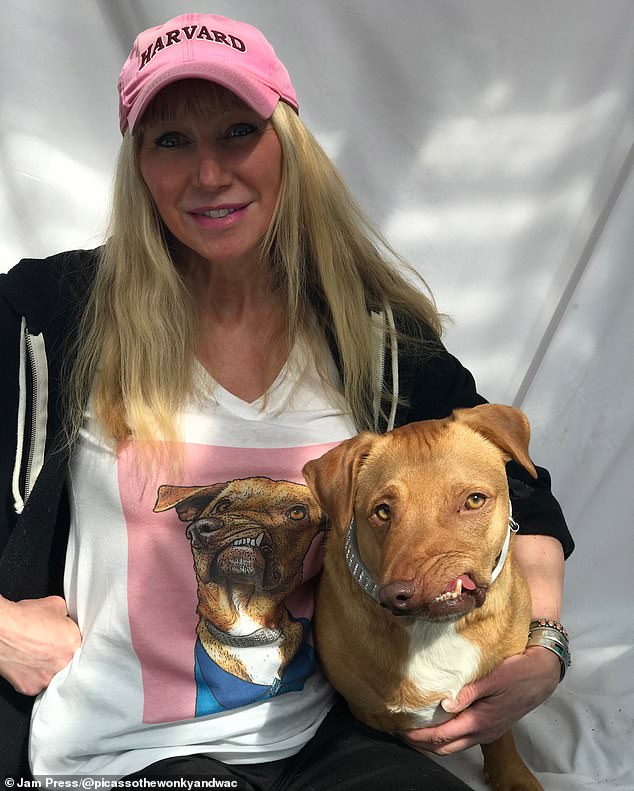 Savior: Animal lover Liesl Wilhardt, 52, has rescued hundreds of animals over the years, and she says it was love at first sight as soon as she saw Picasso

Prior to being rescued, Picasso was at a high-kill shelter in California and was scheduled to be euthanized because the shelter was so overcrowded.

Thankfully, he and his brother Pablo were both taken in by Liesl Wilhardt, 52, who runs a dog rescue called Luvable – where she also looks after dozens of other animals who have been abandoned, including a pot-belly pig named Pax, who has become an unlikely, yet very close, pal to Picasso.

Speaking about her decision to rescue Picasso and his brother Pablo, Liesl says it was love at first sight, and she couldn’t help but be won over by his unique face.

‘I fell in love with his wonky face and said that Luvable would take both the brothers,’ Liesl, who founded her center in 1999, told Jam Press.

‘They were both the sweetest, most loving boys and they were totally bonded to one another, and joined at the hip. I swore I would never separate them, and planned to adopt them to a home together.’

Liesl has rescued hundreds of disabled animals and now owns 55 acres of forest land where she provides the perfect home for dogs, cats, chickens and even pigs – one of whom is best friends with Picasso.

Some of the other pets include five Pit bulls named Buddha, Nenna, Piggy, Owl and Maverick, as well as a pug-chihuahua mix named Hazel. 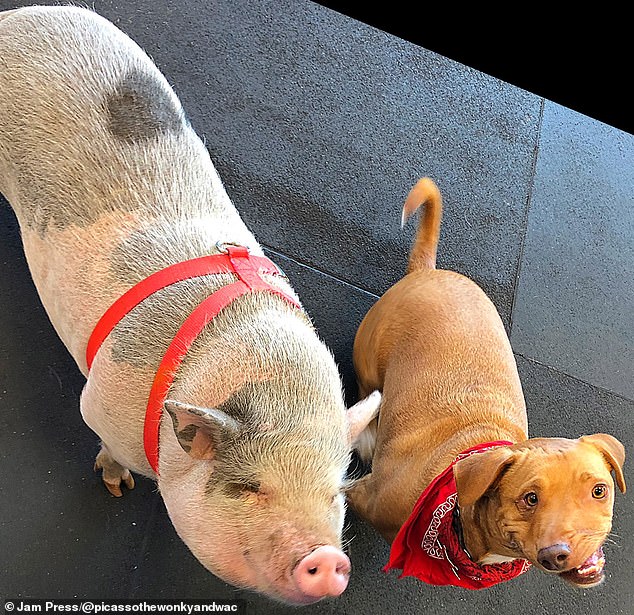 Support: Picasso’s friendship with Pax began when his beloved brother Pablo died of a brain aneurysm, having also been rescued by Liesl 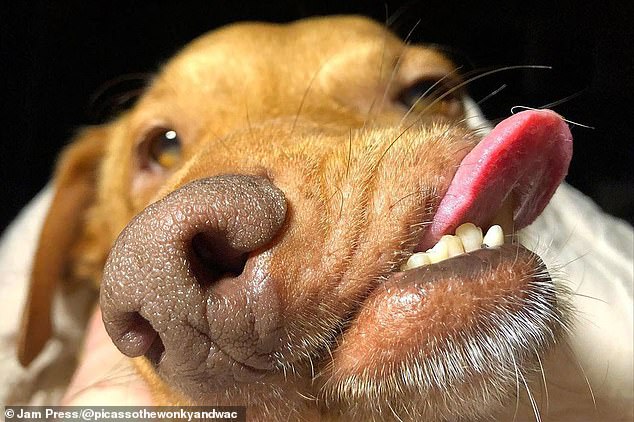 Heartbroken: Both Picasso and Liesl were left devastated by Pablo’s death 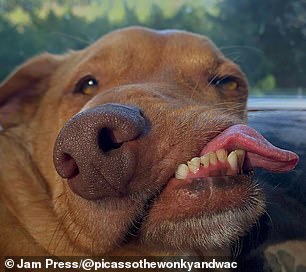 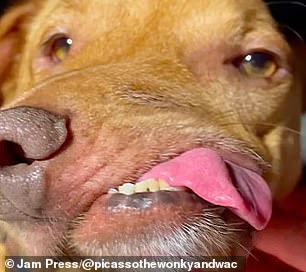 Fighter: ‘Picasso went through a depression after we lost his brother but we got through it, and he’s has accomplished a lot since his rescue,’ Liesl revealed 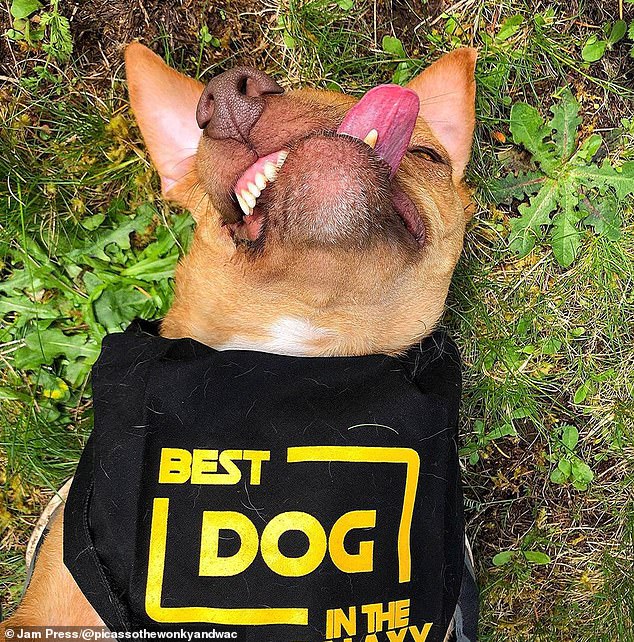 ‘Best dog in the galaxy’: Picasso’s condition does not cause him any medical issues, and Liesl says he is ‘a very happy and normal pup’

The rescue center has also taken on several cats and their litters, and Liesl herself has adopted ten dogs and rescued a pig called Pax.

Most of the pooches come from overcrowded shelters in California where there are more animals than homes available, including Picasso.

Despite his appearance, the pup is just like every other dog and can eat, drink and bark – although he is a bit of a messy eater and can only lick the left side of his face.

Liesl said: ‘Thankfully, his condition is just cosmetic and he doesn’t need any kind of corrective surgery, all we had to do was remove a top canine that was digging into the bottom of his mouth, due to the misalignment.

‘Otherwise, he is a very normal and happy pup.’

The animal lover said: ‘Picasso went through a depression after we lost his brother but we got through it, and he’s has accomplished a lot since his rescue.

‘Picasso befriended our rescued baby Pot Belly pig, Pax, and they have a close bond.

‘He was also awarded the “Diamond Collar Hero Dog” award by the Humane Society of the United States, earned his American Kennel Club “Canine Good Citizen” certificate and both Picasso and Pax won the ASPCA national contest for “Cutest Couple”.’ 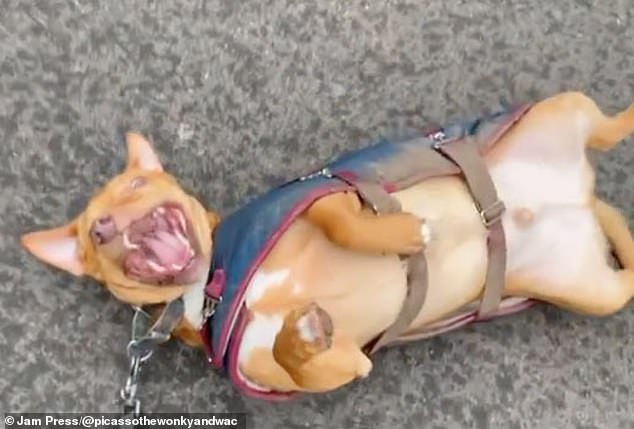 Superstar: Picasso has racked up more than 239,000 followers on Instagram, where users have been charmed by his unique looks and sweet personality 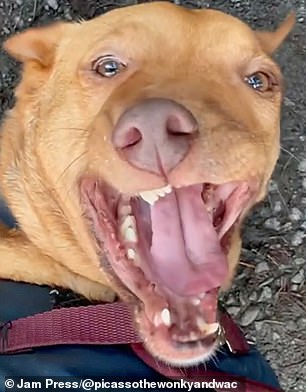 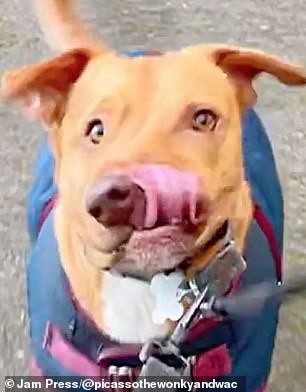 Famous! ‘Picasso’s really unusual face got a lot of attention when I began to post videos of him on our rescue’s Instagram,’ Liesl revealed 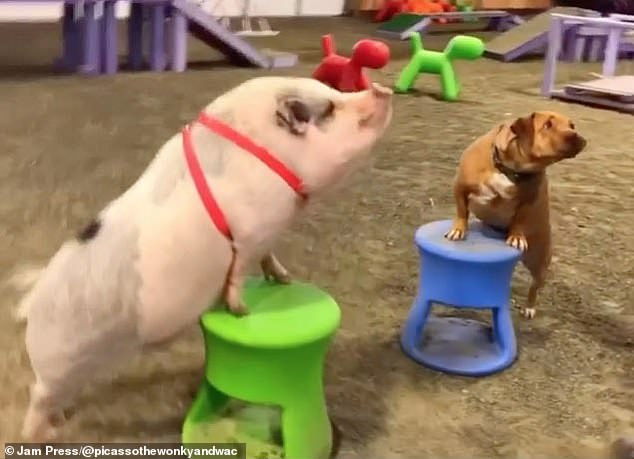 Double trouble: Liesl said that Picasso and Pax have a ‘close bond’

Brood: Liesl has rescued hundreds of dogs and other animals over the years

Liesl said: ‘Picasso’s really unusual face got a lot of attention when I began to post videos of him on our rescue’s Instagram.

‘Nobody had ever seen a dog quite like him.’

The devoted animal lover, who lives on the land where the center is located, spends several hours a day preparing food for the animals, feeding them and cleaning.

Many of the dogs have a variety of health conditions and need surgery or amputations, which she pays for.

Liesl has employed six people to help care for the animals full-time, all of whom regularly take the dogs out for daily hikes.

Other volunteers come throughout the week to walk the dogs, play with the pigs and socialize with the cats and kittens.

Liesl added: ‘Life for me at my animal shelter is just that – a life, and a lifestyle.

‘It isn’t a job for me, it is how I live. There is no time off and no possibility of a vacation. It’s a crazy life, but I love it.’