Actor Dwayne ‘The Rock’ Johnson, known for his muscular physique, has revealed his latest cheat meals and the enormous portions he enjoys in lockdown – blowing fans’ minds.

The Rock, 48, who lives in Georgia, keeps himself in tip-top shape to star in Hollywood action movies, but when he’s not on a strict diet for a big role, the movie star loves to munch on sweet and savory treats.

If you’re feeling bad about indulging in guilty pleasures during the pandemic – just take a look through Dwayne’s latest posts and you’re guaranteed to feel better.

From plates stacked with a dozen pancakes to massive slices of cheesecake, sushi and cookies, when he has a cheat meal, Dwayne doesn’t just stick to a measly slice – the actor often eats meals that could easily feed a family. 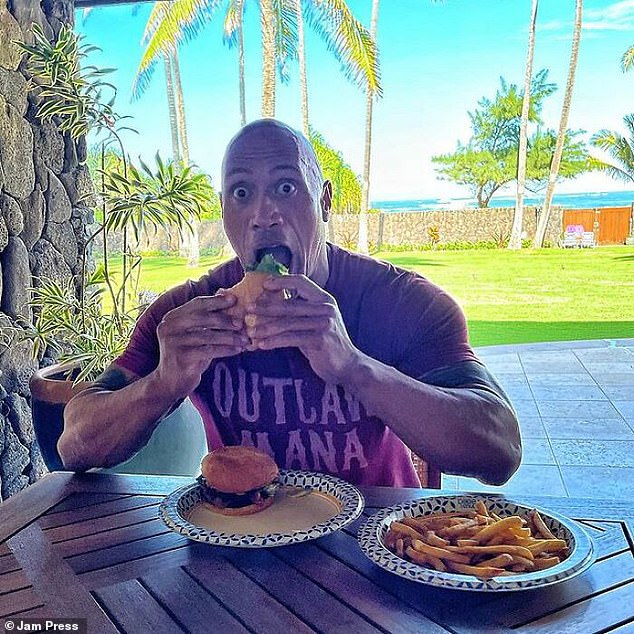 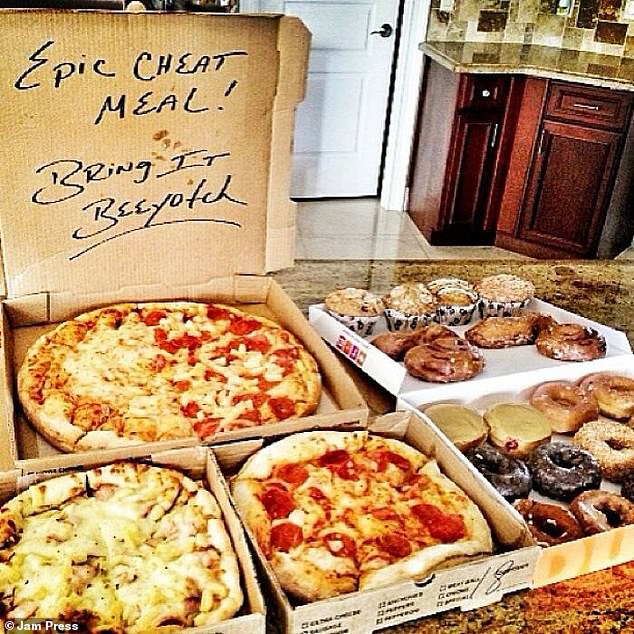 Countless pictures on his social media page show the meals the star and retired professional wrestler keeps for his days where his diet is put on hold.

One snap shows The Rock can polish off a whole sharing-sized sushi platter by himself, and will sometimes eat two burgers in one sitting.

Another picture shows the actor tucking into a pizza fresh from the oven, with an additional three pizzas lined up next to him.

It’s not just savory meals the actor likes to treat himself to, as the pictures reveal he also has a massive sweet tooth. 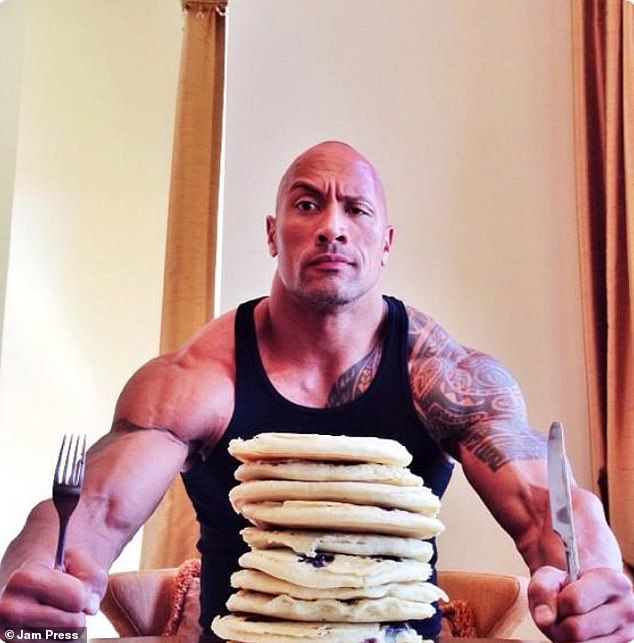 While he is mindful of his health and follows a very strict diet, the Rock knows just how to indulge

Pancakes and cookies as well as impressive slices of cheesecakes are on The Rock’s cheat day menu.

One snap shows the star will also tuck into three tubs of ice-cream in one go while bingeing some of his favorite shows.

In one of his latest cheat meal photos, the Rock can be seen drenching a plate of pancakes in maple syrup with the caption: ‘That’s not enough. Don’t cheat yourself, treat yourself and enjoy your hard earned cheat meals, my friends.’

One user wrote: ‘I got a cavity just watching this. looks f****** delicious, enjoy!’

Another fan added: ‘You deserve it!! Get it all in that bellyyyyyyy’ 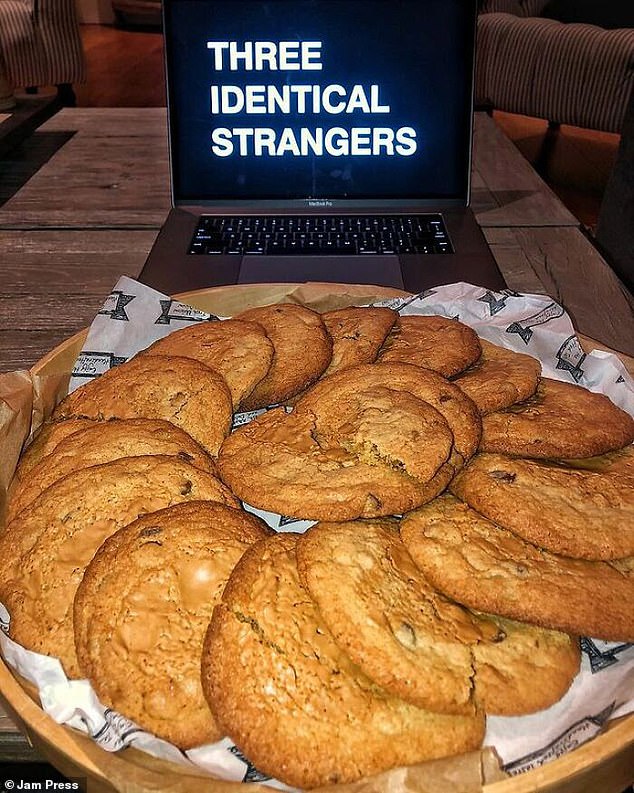 15 cookies await as The Rock shares another picture of a normal cheat day, after weeks of dieting 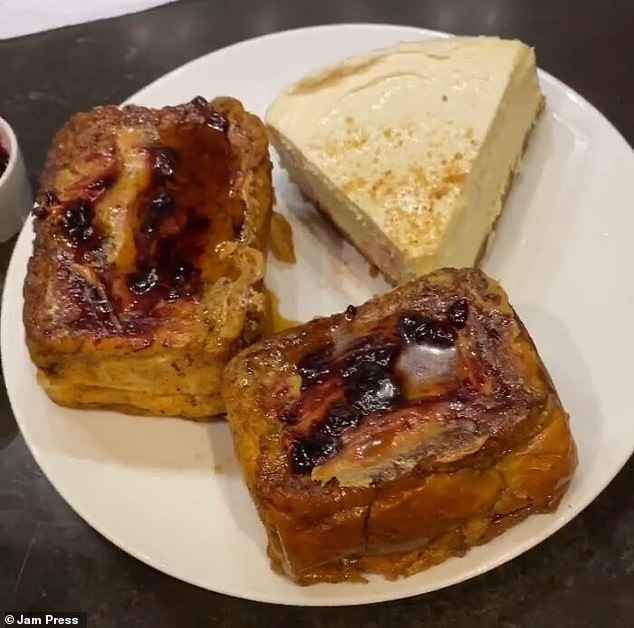 A look at one of The Rock’s mouthwatering dessert selection, with glazed buns and cheesecake

Mocking the large amount of maple syrup on the pancakes, one person said: ‘I think that’s a little too much syrup Rock.’

In another of Dwayne’s cheat meal photos, featuring a plate of sushi and cookies, he wrote: ‘Late night soosh train. cheat meal in full effect. Accompanied by soy sauce and hunks of woooooosabi and two big ass chocolate chip cookies. 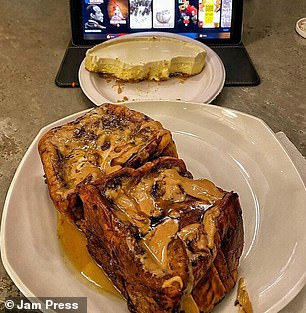 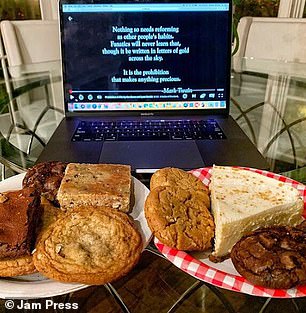 The Rock loves cake, whether it’d be buns and cheesecake (left) or cookies, cheesecake and brownies (right) 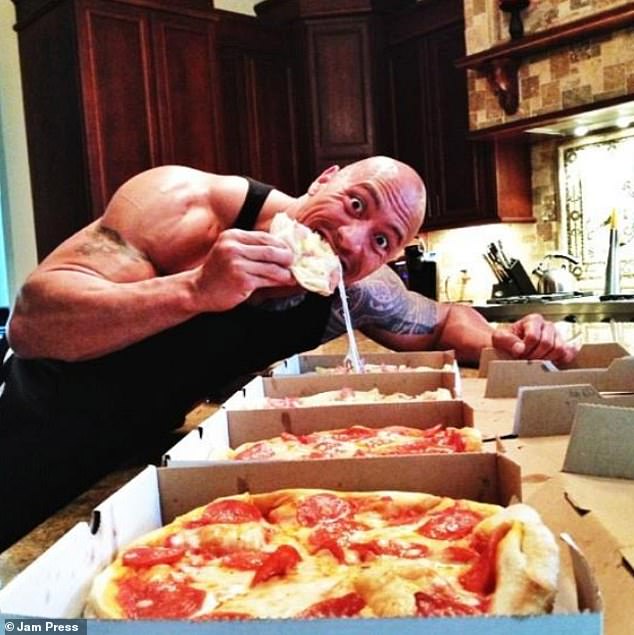 One user wrote: ‘Those chocolate chip cookies need their own IG page they can speak for themselves’

Another added: ‘Looks super tasty, I am looking forward to the invitation.’

‘That cookie is bigger than my future,’ added someone else.

Another image shows a bowl of vodka bolognese, alongside two pieces of bread, leading one user to ask: ‘Are those bagels for rolls?’ 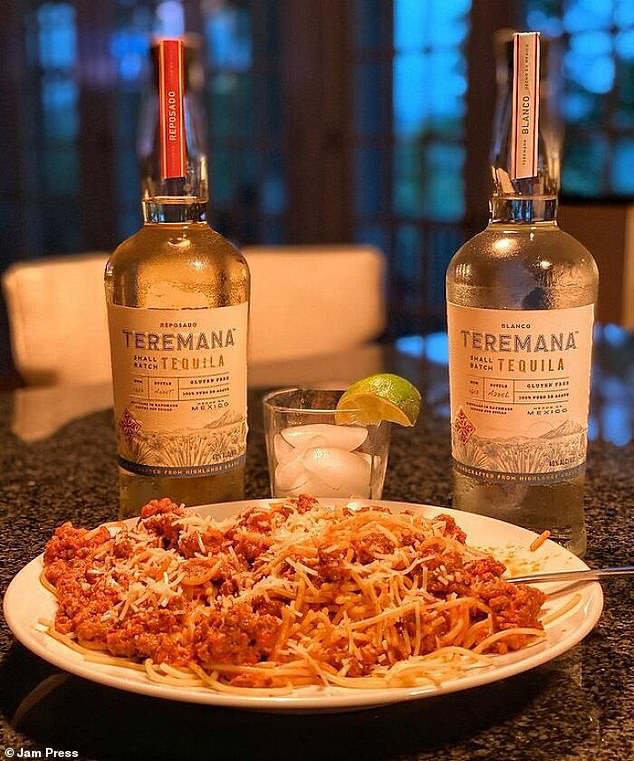 Tequila time! The actor indulged in a large plate of spaghetti with some shots on the side 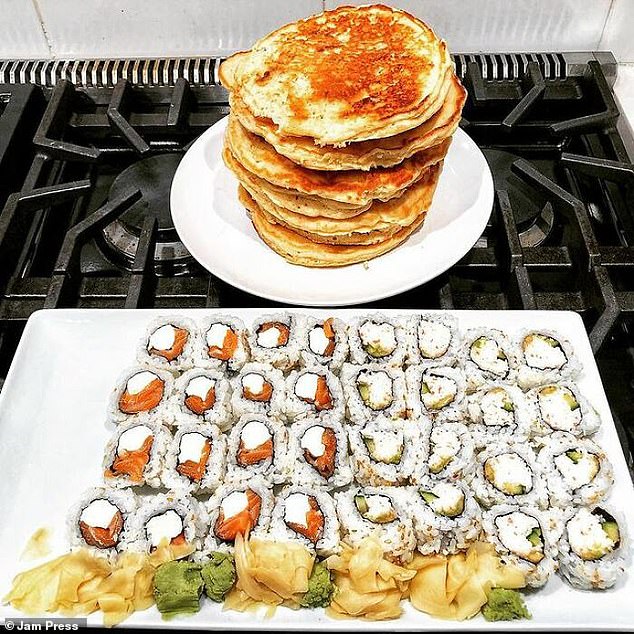 Dinner’s ready! Some salmon maki with cream cheese and California rolls, followed by a big pile of pancakes 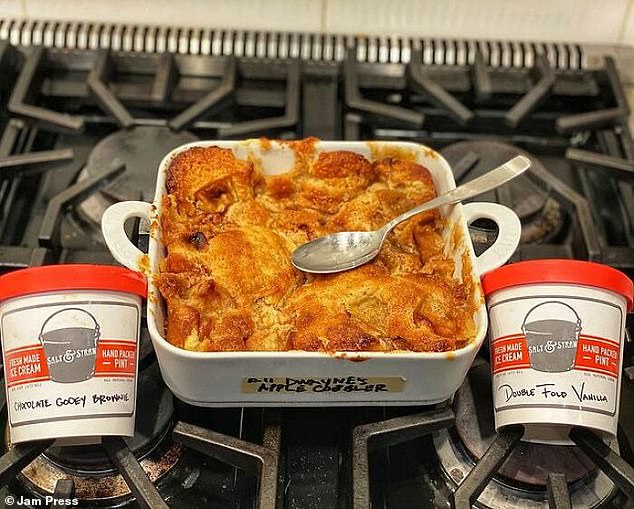 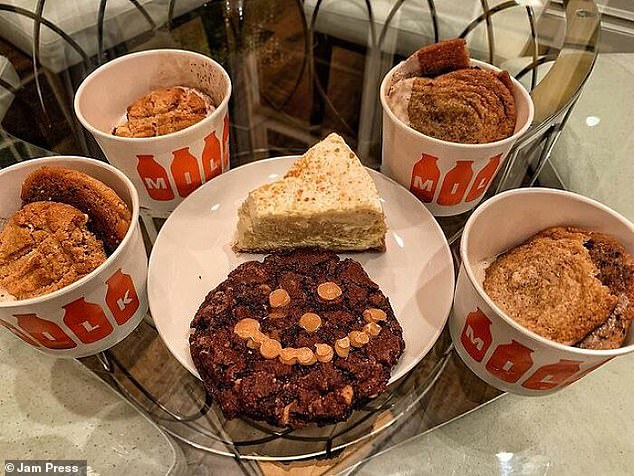 Did somebody say cookies? More is more when it comes to The Rock cheat days and he indulges his sweet tooth

But The Rock also shares some of his more nutritious meals with fans, such as a recent breakfast of ‘whole eggs and egg whites, beef tenderloin, oatmeal and blueberries’, alongside English muffins with smart butter, topped with Stevia and cinnamon for sweetness.

‘Aloha, my friends. Here’s my Saturday breakfast as we dial it in…,’ he captioned the post.

‘One month away from shooting #blackadam so the diet is very strict and all food is weighed & measured so my conditioning can come in on point.’ 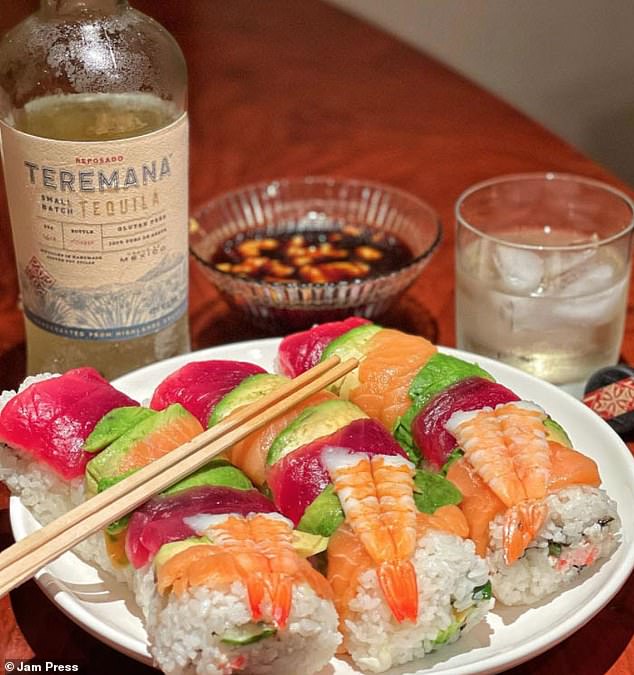 Rainbow rolls. What looks like a proper sit down meal to some could only be an afternoon snack to the Rock on a normal cheat day 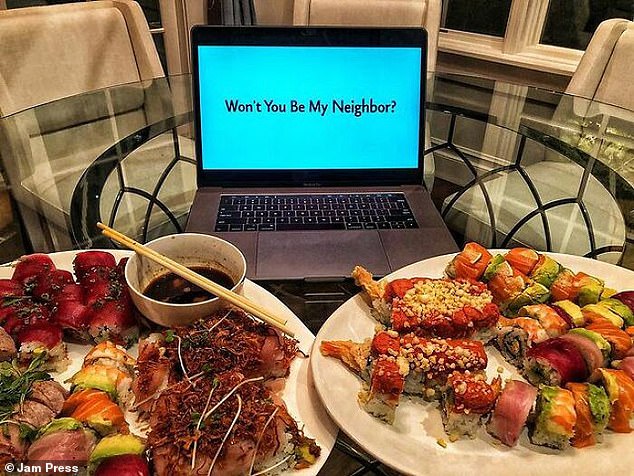 Sushi explosion on moving night. The star loves to share pictures of the insane meals he treats himself to on cheat days 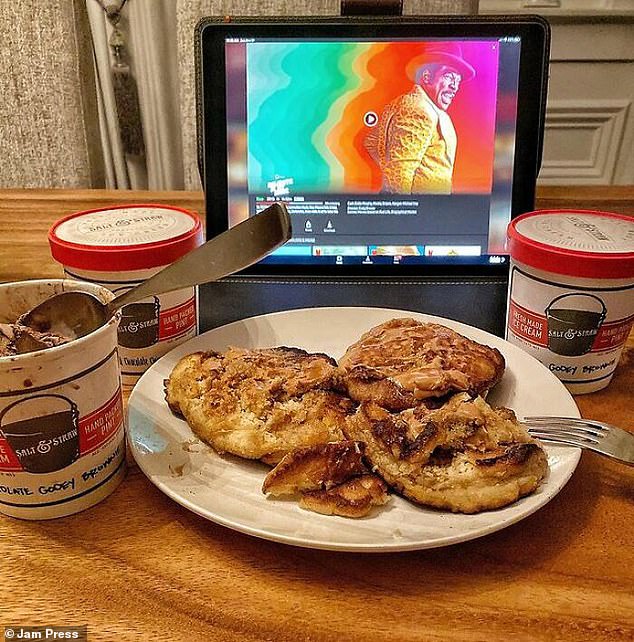 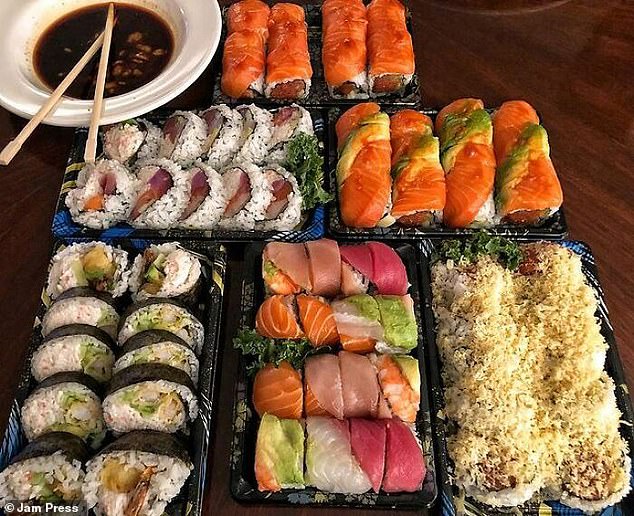 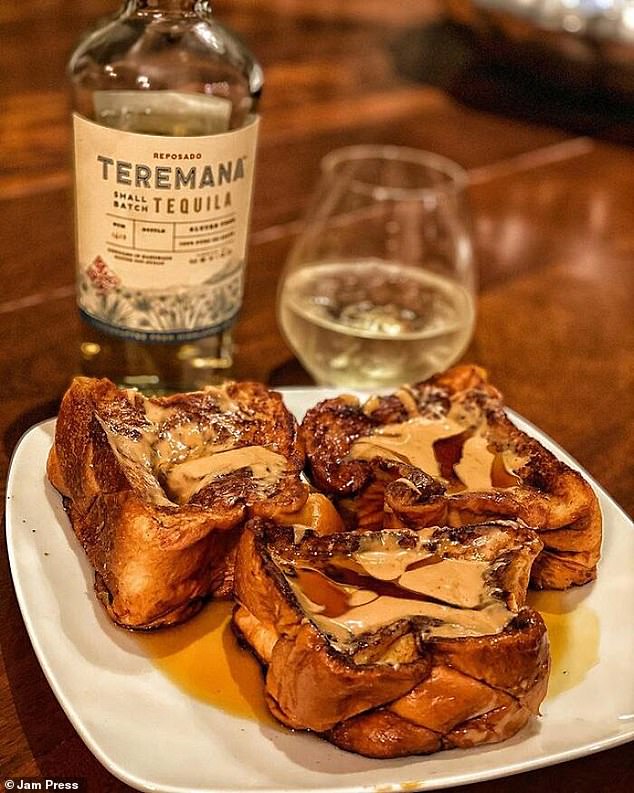 Cinnamon buns and tequila. The Rock has a very strict diet, but lets everything go on his cheat days 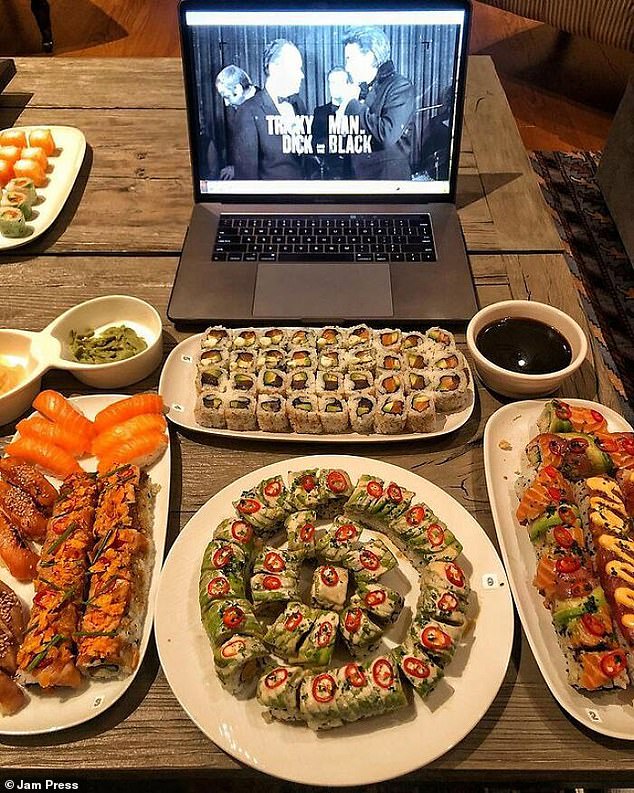 Sushi for one! The star can polish off sharing-size sushi platters by himself in from of a documentary 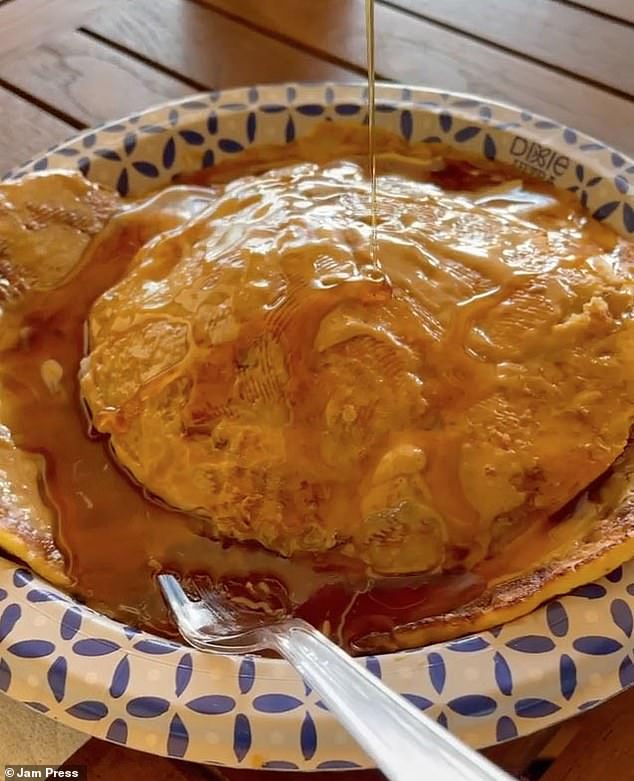 The Rocks’ cheat day meals menu have left his fans salivating online, with some sayingthe star deserved the break from his diet