By Ellen Coughlan and Sean O’grady For Mailonline

And Emily Atack showed her ex what he was missing in a sizzling snap in a crochet pink bikini top on Tuesday.

The Inbetweeners star, 31, took to her Instagram Stories to lament that she was struggling to find swimwear for her upcoming holiday because the tops couldn’t keep her ‘burratas under control.’ 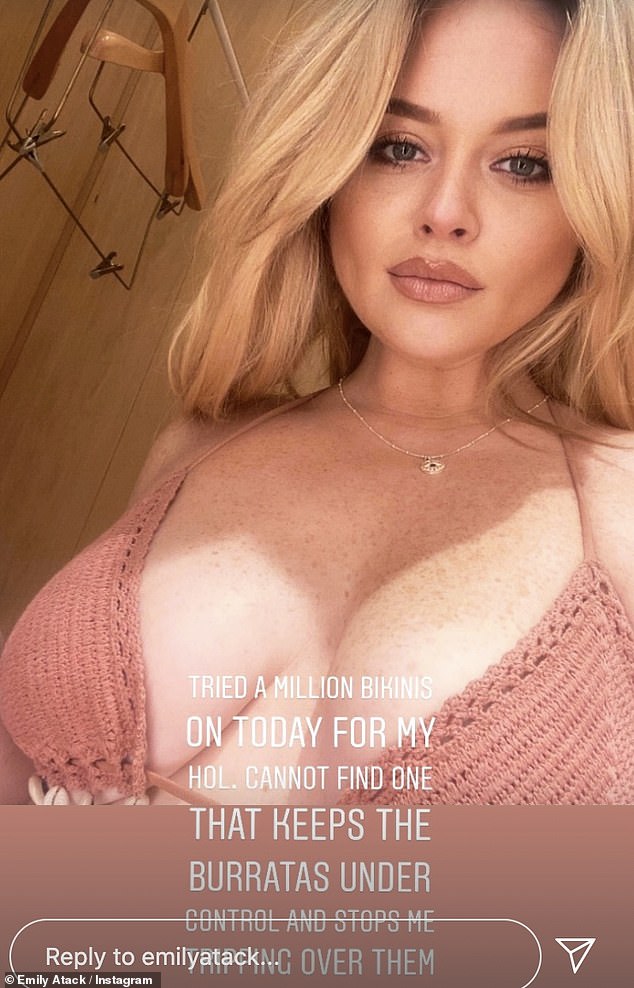 Sizzling: Emily Atack, 31, set pulses racing with busty snap after complaining she’s struggling to find a bikini that keeps her ‘burratas’ under contro

The beauty looked typically stunning as she smouldered at the camera for the racy post, which came as she prepared for her upcoming holiday.

She hilariously captioned the post: ‘Tried a million bikinis on today for my hol. Can not find one that keeps the burratas under control and stops me tripping over them.’

It comes after Emily was seen catching up with her former flame Seann Walsh over text following her split from Jude. 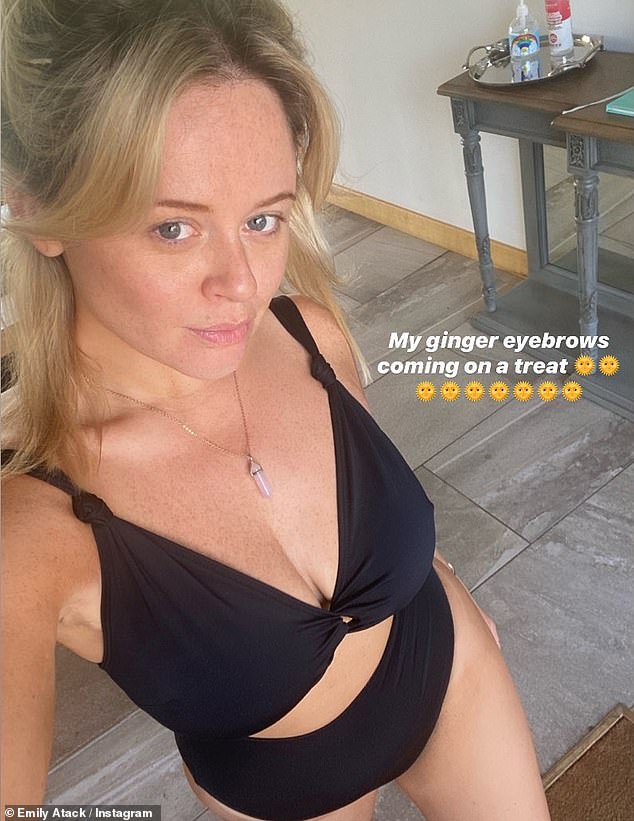 Wow! The Inbetweeners star took to her Instagram Stories to reveal her struggle to find a bikini to keep her ‘burratas under control’

The star and the comedian, 35, were previously said to have enjoyed a ‘string of dates’ back in 2016 after clicking at the Edinburgh Fringe Festival.

Emily took to her Instagram Stories last week and shared a screenshot of the pair’s WhatsApp chat where she sent him a voice note to which he replied: ‘This is fantastic’.

Emily then sent him another voice note followed by a message reading: ‘How do I get my f*****g tele to work’ to which Seann replied: ‘Shove it up your a**e’.

Ensuring there was no suggestion of romance, Emily also played Dionne Warwick’s song That’s What Friends Are For over the post. 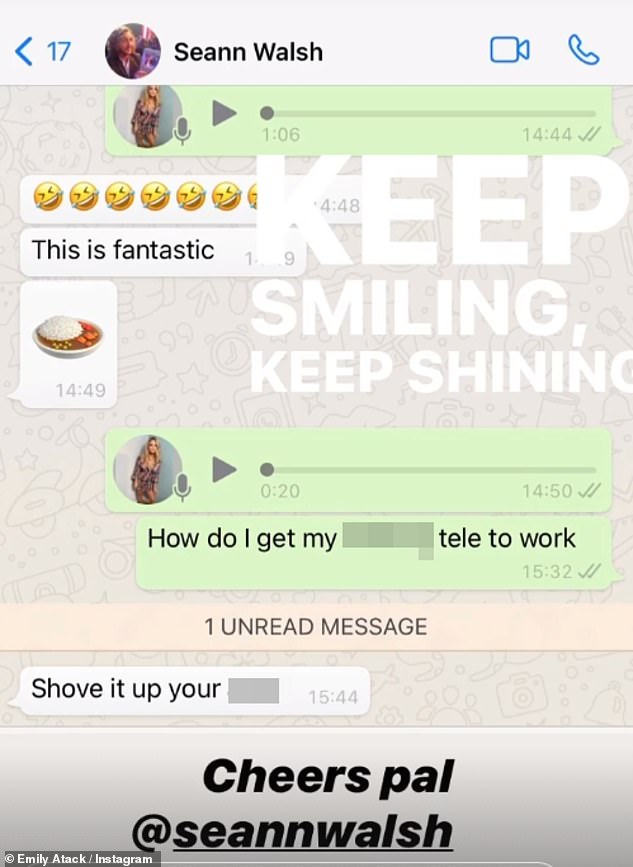 ‘Cheers pal’: Emily took to her Instagram Stories and shared a screenshot of the pair’s WhatsApp chat where she sent him a voice note to which he replied: ‘This is fantastic’ 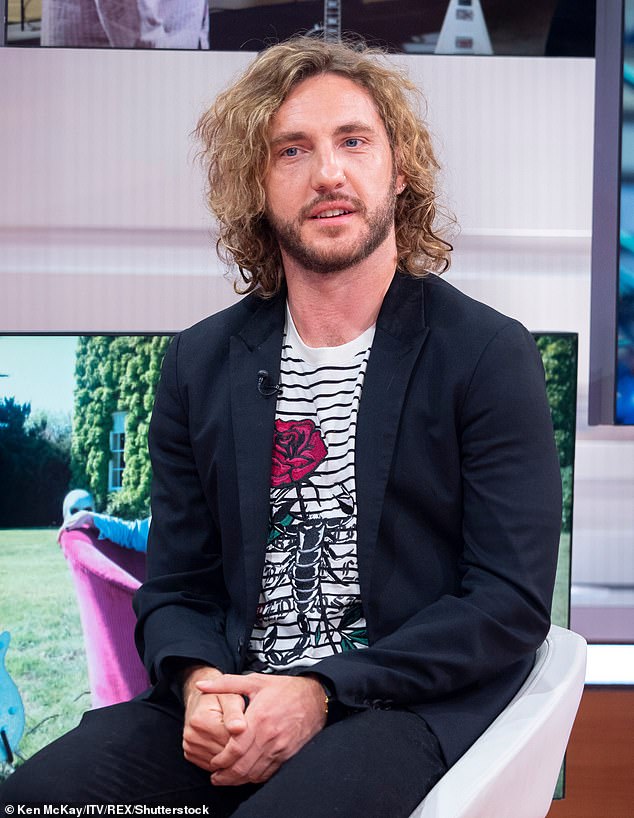 Catch up: It comes after Emily and Seann (pictured) were seen enjoying a friendly catch up  late last month

Emily recently split from boyfriend Jude after struggling to see him due to her hectic work commitments.

The couple were last pictured at the end of July attending The Ivy Asia launch in Chelsea and, last month, Emily shared a loved-up picture with Jude at her sister’s wedding.

But a friend of Emily’s told The Sun: ‘Emily and Jude were a great match and had a lot of fun, but it ended up being too tricky to make it work long term, they have barely managed to see each other recently so made the decision to call it quits.

‘Emily has so much going on at the moment too and that made their relationship a little more difficult.

‘She has just finished filming the second series of her one woman TV show and that takes a lot out of her. Plus she’s started to move house now and it is a lot to juggle.’

Emily’s pal added while the pair are ‘pretty upset’ about the split, ‘both knew it was over’.

Emily’s representatives declined to comment when contacted by MailOnline.

It comes after Emily and Seann were seen enjoying a friendly catch up at a Nando’s in Clapham late last month.

It appeared to be a working lunch for the duo, as MailOnline understands that Seann is working as one of the writers on Emily’s show – The Emily Atack show.

An insider said: ‘Seann is part of the writing team helping with some of the stand up elements on the latest series of the Emily Atack show which is currently in production.’

It was claimed in October 2018 that Seann and Emily enjoyed a ‘string of dates’ after clicking at the Edinburgh Fringe Festival in 2016. 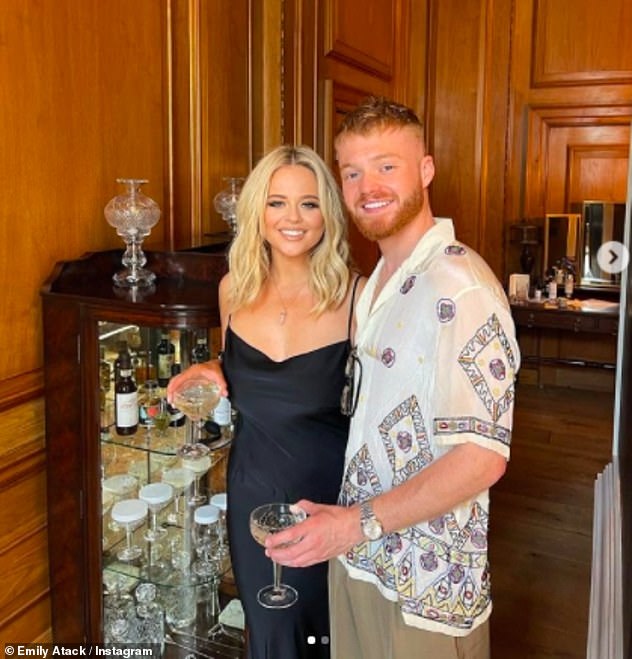 Breakup: Emily recently split from boyfriend Jude Taylor after struggling to see him due to her hectic work commitments