The England boss is ready to make a host of changes for Sunday’s clash in Tirana with senior players Harry Kane, Harry Maguire and Declan Rice among those set to return against Albania.

However, Marcus Rashford will not be involved and has returned to his club due to the foot injury that ruled him out of Manchester United’s FA Cup quarter-final defeat at Leicester. 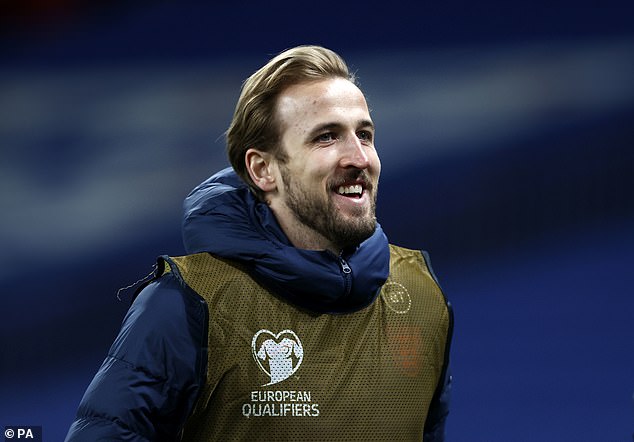 Harry Kane, Harry Maguire and Declan Rice among those set to return against Albania

Southgate has already confirmed Nick Pope will keep his place in the starting XI from the team that cruised to a 5-0 win over San Marino on Thursday night, while the Burnley ’keeper will also play in Wednesday’s clash against Poland.

But Southgate is expected to revert back to his tried and tested personnel for Sunday’s clash as he looks to take control of their World Cup qualifying group.

Speaking ahead of the win over San Marino, he revealed that he knows his starting XI for this summer’s Euros opener against Croatia on June 13.

In usual circumstances, vice-captain Jordan Henderson would be expected to start for England at the Euros.

However, Southgate has expressed his concerns over the Liverpool skipper’s fitness following the midfielder’s groin surgery last month.

Southgate said: ‘We can only say that Hendo himself is very optimistic about how the operation went and the prognosis that the specialist has given him as to what is possible.

‘But, of course, we are conscious that with any injury of that nature, there is a guide and a time defined, but anything can happen along the way.

‘We know it is going to be close to the end of the season. We will just have to see how it goes. He will give himself every chance of being available.’

Similarly, goalkeeper Jordan Pickford is expected to start the Euros as England’s No 1.

The Everton man was not included in the current squad due to an abdominal injury, giving Pope a valuable chance.

Southgate said: ‘(Pope) has been really patient for his opportunity and has performed consistently at a high level every week for his club. He is a very calm character and I really like his personality.’

Bukayo Saka will not be linking up with the squad. The Arsenal teenager stayed with his club for assessment on an ongoing issue in the hope he would be available for the Albania and Poland games, but will now stay put and not join up with England