The first Covid lockdown in England and Wales did not trigger a spike in suicides, official data revealed today.

Office for National Statistics (ONS) figures showed there were 1,603 suicides in the two countries between April and July 2020 — fewer than the number for the same time period in any of the previous five years.

Statisticians said the fall in suicides was driven by lower rates in men.

Experts said today the latest data was ‘very reassuring’ that there was no spike in suicides during the first wave of the pandemic.

They have previously suggested the drop could be down to ‘genuine social cohesion’ from people coming together to fight Covid, and a sense at the time that the crisis would soon pass.

The figures also dispute warnings that the draconian restrictions would inevitably lead to a surge in people taking their own lives. 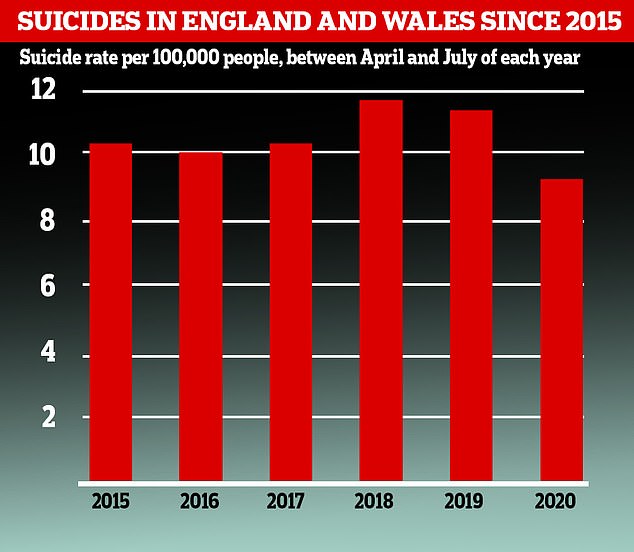 The suicide rate for England and Wales was the lowest since records began, figures showed. There were 9.2 suicides per 100,000 people between April and July 2020. For comparison, for the same period over the last five years there were 10.7 per 100,000 on average 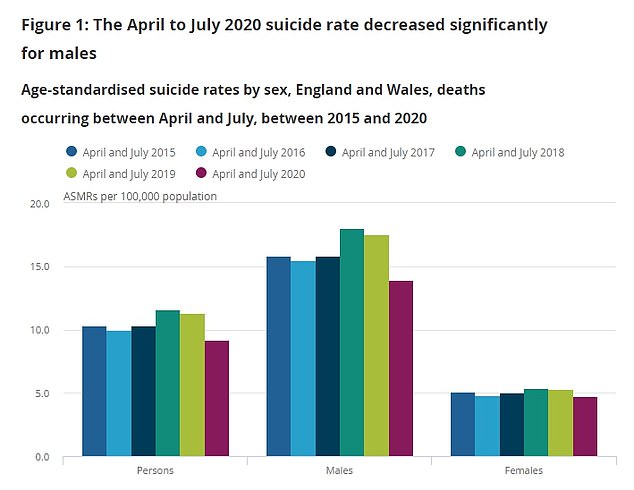 Statisticians said the drop was driven by a fall among men. In 2020 their suicide rate fell below 15 per 100,000 (purple bar in second group), the lowest in the past five years 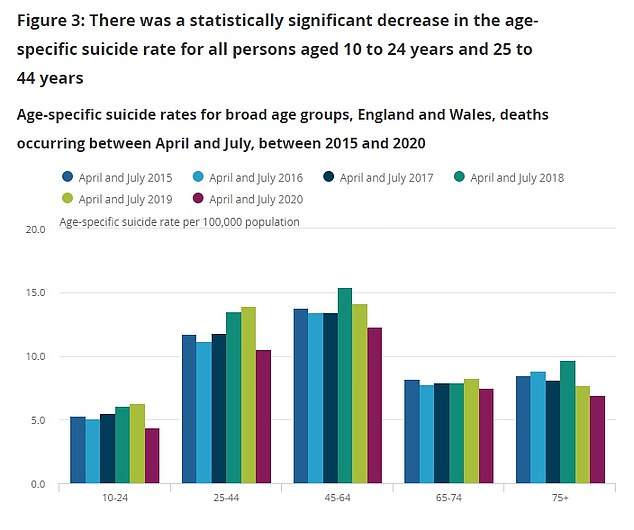 Suicides also fell among all age groups compared to the previous year. There was a particularly large drop among 10 to 24-year-olds the data showed (purple bar in first group on left) 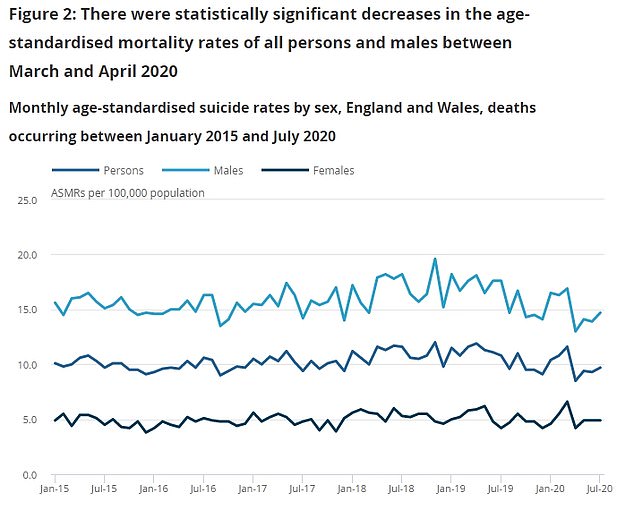 ONS data showed suicide rates fell in both sexes, but a bigger drop occurred among men 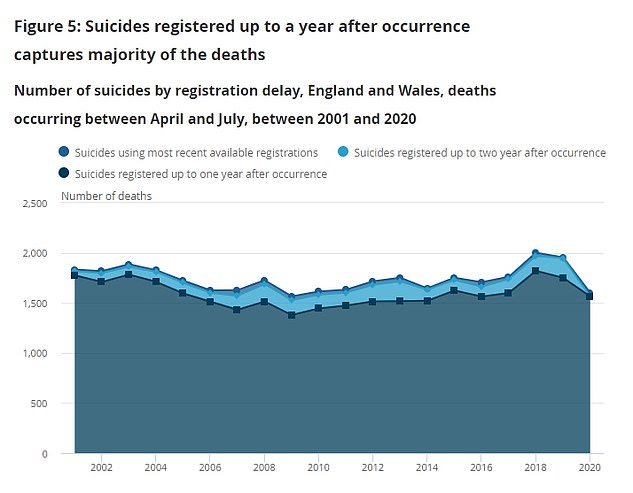 This graph shows the number of suicides registered up to a year after they happened (dark blue) and up to two years (light blue). The ONS said most suicides for the period will now have been registered, and that it would take an ‘unfeasibly large’ number of late registrations to conclude that suicides went up at the start of the pandemic.

Head of health analysis and life events at the ONS Julie Stanborough said: ‘The latest available evidence shows suicide rates did not increase during the early stages of the pandemic, which is contrary to some speculation at the time.

‘Instead, we found suicide rates to be lower between April and July 2020 — the first wave of Covid in England and Wales — when compared with the same period in previous years.

‘Our findings are consistent with other studies, which found no increase in suicide in the seven months that followed the first national lockdown in 2020.

‘They are also comparable with research covering other countries — such as the US, Germany, Japan and Australia — which found suicide numbers have remained largely unchanged or declined in the early months of the pandemic compared with the expected levels based on the pre-pandemic period.’

WHY HAVE SUICIDE RATES NOT RISEN DURING THE FIRST LOCKDOWN?

A previous paper from scientists at Manchester University has also suggested that suicide rates did not rise during England’s first lockdown.

Professor Nav Kapur, a psychologist and one of the study authors, said this may be due to ‘genuine social cohesion’ at a time of crisis.

‘We’ve seen this in data from suicide rates around the time of the two world wars,’ he said.

‘They decreased and there is this idea that societies pull together when there’s an external threat.’

In the paper the experts add that lockdown may have also led to people checking in more on friends, family and neighbours, and reduced access to some methods of suicide.

‘In the first lockdown they may also have been a sense that the crisis would pass, preventing the despair that is an important cognitive step towards suicide,’ they add.

The ONS report mark the first time that data on the number of suicides during the pandemic has been published.

Currently there are few figures available because of the lag between deaths and their registration by a coroner. In many cases this is more than a year.

The ONS said most suicides for the period will now have been registered, and that it would take an ‘unfeasibly large’ number of late registrations to conclude that suicides went up at the start of the pandemic.

Among men there were 1,185 suicides recorded, compared to 1,388 on average over the five years before Covid struck.

Rates fell in every age group, with 45 to 64-year-olds accounting for 40 per cent of suicides registered.

The assistant director of research and influencing at mental health charity the Samaritans, Jacqui Morrissey, said: ‘The latest ONS data is very reassuring as it confirms that there was no dramatic increase in suicide rates during the early phase of the pandemic, contrary to what many expected.

‘In fact, fewer people died by suicide in the early months of the pandemic than in the same period in previous years and research suggests this may be down to people pulling together and looking out for one another more.’

She added: ‘However this data is now over a year old and we know that the pandemic is going to have a long lasting impact on people’s mental health and wellbeing so there is no room for complacency.’

England and Wales entered their first lockdown on March 23. Tough rules stayed in place until later in the summer.

England has faced two other lockdowns since the first, during November 2020 and from January to March 2021.

Wales undertook a 17-day circuit breaker lockdown from October 23, and entered a third lockdown on December 19 which continued until March.

During the autumn and winter last year, both countries were subject to a range of Covid restrictions under separate tier systems.

In an open letter to the Government, the 42 signatories claimed the longer lockdown lasted the worse the ‘collateral damage’ would be.

The message was modelled on the Great Barrington Declaration, which called for the replacement of lockdowns with ‘focused protection’ for the vulnerable.

For confidential support call the Samaritans on 116123 or visit a local Samaritans branch, or click here for details

COVID-19 has killed at least 65,000 more men than women in US – and black males are at highest risk