The fury at the greed of 12 of Europe’s major clubs for their clandestine movements in forming the breakaway Super League is rapidly rising across the continent.

European media displayed a uniform reaction of shock on Monday as the game was left reeling by the Super League news, but today devastation has rightly turned to anger.

Wherever you look, from Spain to France, Portugal to Italy, the fury at what Portuguese publication A Bola has labelled ‘The Dirty 12’ is only intensifying.

It is A Bola’s front page which is perhaps the most striking on Tuesday – it resembles a wild west wanted poster with the emblems of the 12 founder clubs of the Super League.

‘The football world (and beyond) unites against the clubs that created the European Super League’, their front page says. 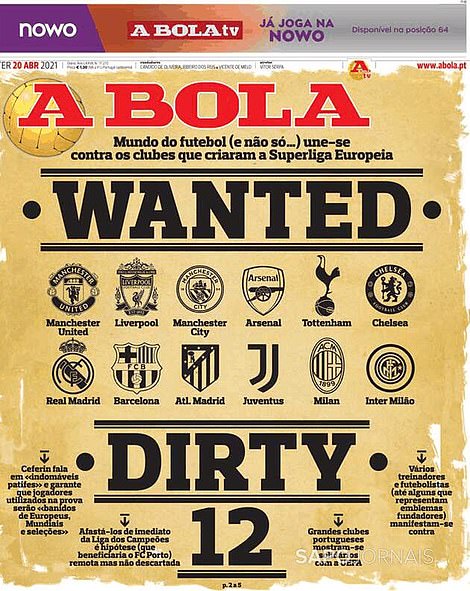 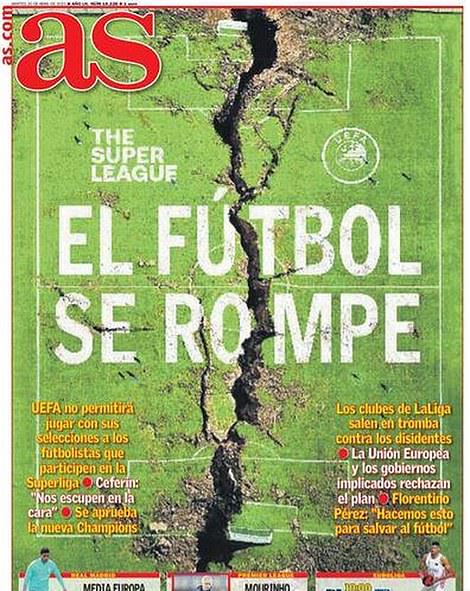 Europe’s newspapers reacted unanimously in anger at plans for a European Super League with Portuguese newspaper A Bola condemning ‘The Dirty 12’ who are breaking away; Diario AS in Spain showed off a football pitch split in two to show the damage a Super League is ripping through football 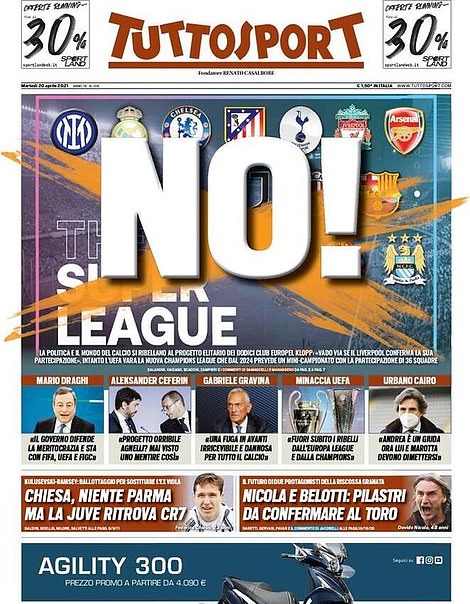 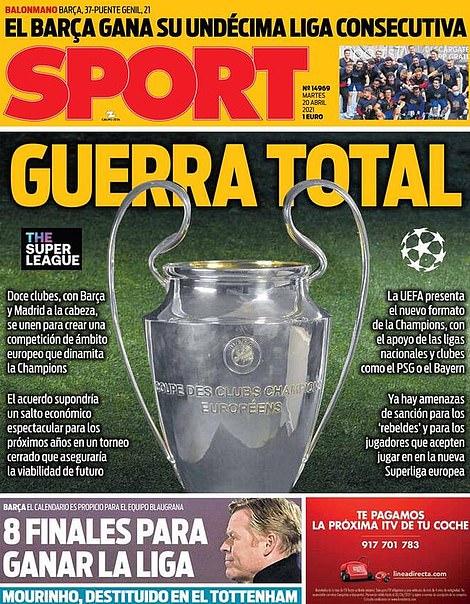 Italian outlet Tuttosport simply shouted ‘NO’ on their front cover on Tuesday; Spanish newspaper Sport (right) described the fight for these teams to leave as a ‘Total War’

However, according to fellow Portuguese publication Record, anger could soon be directed at someone a little closer to home – their front page says ‘Benfica try Super League’ alongside a picture of club president Luis Filipe Vieira and the caption: ‘He wants a seat at the table worth millions.’

Portugal, so far as has been revealed, do not have a founding member in the Super League 12 but Italy do, with Inter Milan, AC Milan and Juventus all agreeing to be part of it.

The Italian media were equally as unforgiving as their counterparts in Portugal, with Gazzetta dello Sport running the headline ‘FERMATELI!’, translating as ‘STOP THEM!’.

Tuttosport ran a cross through the Super League team badges and simply wrote ‘NO’ over the top of it while Corriere dello Sport called for the dissenting teams to ‘immediately be out’.

All three Italian sides are out of European competition currently and have been criticised for trying to secure a place in a closed-shop division. 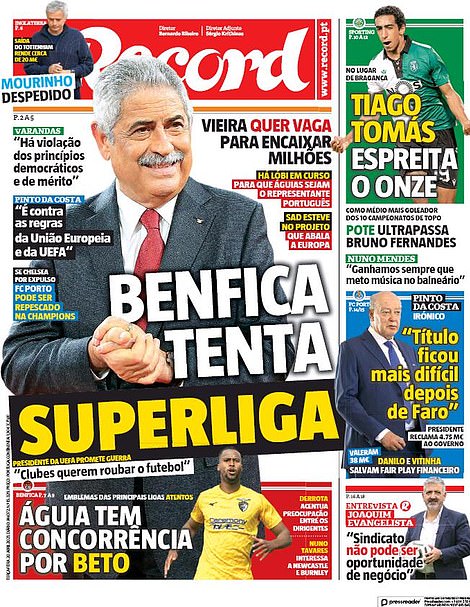 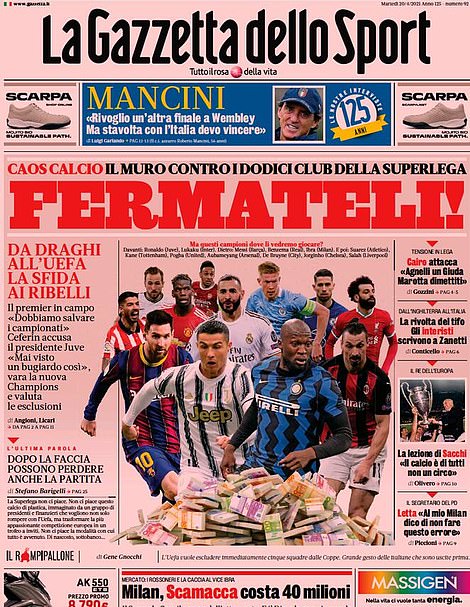 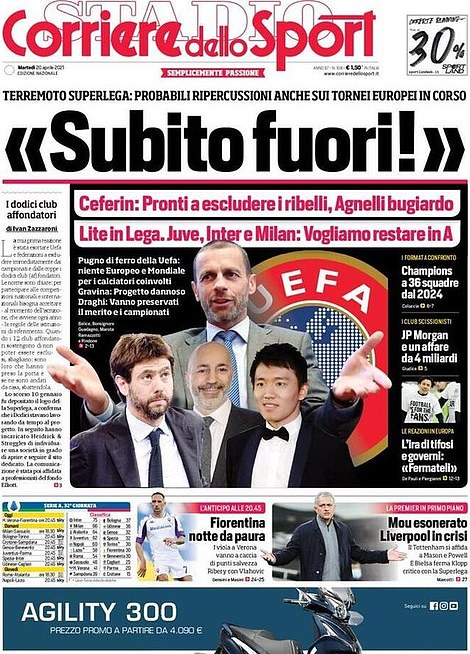 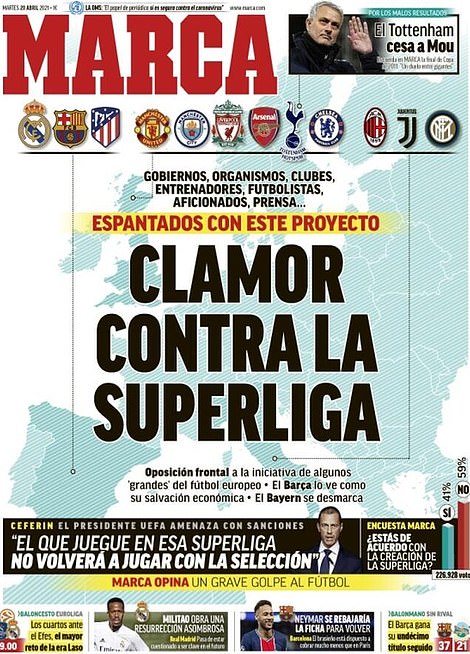 Corriere dello Sport of Italy wants to see those teams looking to defect immediately thrown out of European competition, roaring ‘out now!’;  Spanish outlet Marca overlapped a map of Europe with the ‘clamour against the Super League’ from ‘governments, organisations, clubs, coaches, players, fans, media’

In Spain, a country also having three clubs defecting to the Super League – Real Madrid, Barcelona and Atletico Madrid – newspaper Diario AS produced the most damning front page.

The cover of Tuesday’s edition showed a football pitch that had been split in two and AS’s editorial team wrote ‘Football is broken’ as their headline.

On one side of the broken pitch sat the logo for UEFA, the governing body for football in Europe, and on the other sat the badge for the newly formed Super League.

Madrid-based Marca ran a map of Europe on their front cover, writing ‘clamour against the Super League’ as they responded to the widespread condemnation.

Mundo Deportivo focused on the financial windfall the defecting clubs would benefit from with £350million the reported figure for founding members.

Sport labelled the last 48 hours since news broke of the breakaway plans as a ‘total war’ against football as fans know it. 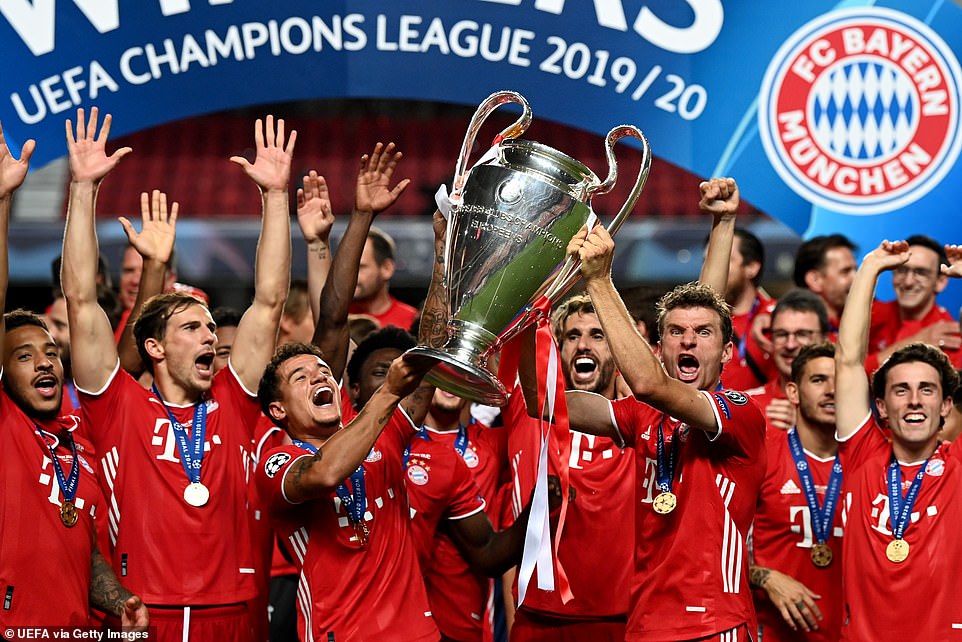 Plans for the European Super League were revealed on Sunday after it emerged that six Premier League teams had signed up to join a breakaway competition ‘as soon as is practicable’.

Along with the Spanish and Italian clubs, Manchester United, Liverpool, Chelsea, Manchester City, Arsenal and Tottenham are looking to create a near closed shop to replace UEFA’s Champions League and Europa League.

Bayern Munich and Paris Saint-Germain are understood to have rejected the idea, although the plan is to expand the league to 15 founding members. Borussia Dortmund have confirmed they will not take part.

In a statement from the European Super League organisers on Sunday night, confirming earlier reports, it was explained that plans for their inaugural season are to see a ‘new mid-week competition’.

‘Twelve of Europe’s leading football clubs have today come together to announce they have agreed to establish a new mid-week competition, the Super League, governed by its Founding Clubs,’ the statement began.

‘It is anticipated that a further three clubs will join ahead of the inaugural season, which is intended to commence as soon as practicable.

‘Going forward, the Founding Clubs look forward to holding discussions with UEFA and FIFA to work together in partnership to deliver the best outcomes for the new League and for football as a whole.’