Experts have suggested a black panther could be on the loose after a walker spotted a ‘big cat’ on camera.

The animal was spotted in woodland in the village of Thrupp near Stroud in Gloucestershire, yesterday morning.

Frank Tunbridge, who has spent decades investigating sightings of big cats in the British countryside, claimed the ‘streamlined’ animal ‘exhibits all the features of a black panther.’ 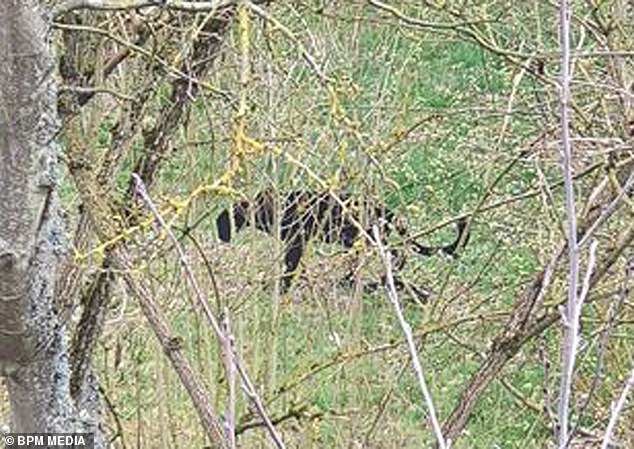 The creature was seen in fields just outside Stroud yesterday at around 11am, and the man who captured the image is ‘convinced’ the animal was a big cat 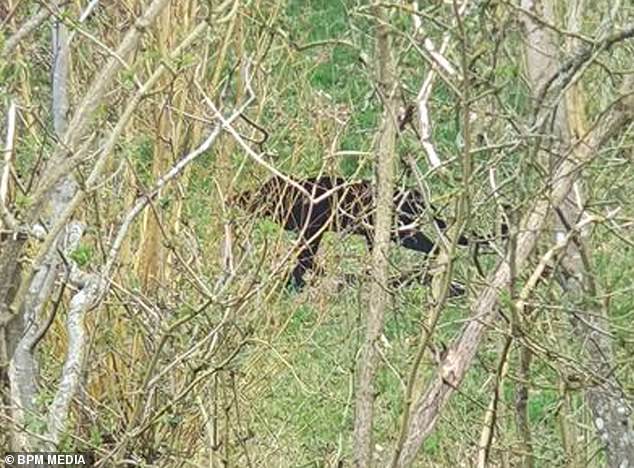 A ‘black panther’ is not its own species—it is an umbrella term that refers to any big cat with a black coat.

A black panther is a big cat (of any species, but most commonly a jaguar or a leopard) whose coloration is entirely black.

Close examination of one of these black cats will show that the typical markings are still there, and are simply hidden by the surplus of the black pigment melanin.

In North America, the term panther is commonly used for the puma; in Latin America it is most often used to mean a jaguar. Elsewhere in the world it refers to the leopard.

The name may have originated from the Latin name Panthera for the big cats and was probably shortened from Black Panthera to Black Panther.

The condition is caused by the agouti gene, which regulates the distribution of black pigment within the hair shaft, according to the University of California.

A melanistic black leopard, or “black panther” are the most common form of black panther in captivity and have been selectively bred for decades as exhibits or exotic pets.

A black panther (leopard) is able to hunt and kill animals outweighing them by more than 1,350 pounds.

Black leopards are found in densely-forested areas in south-western China, Burma, Assam and Nepal; and other parts of southern India and are said to be common in Java and the southern part of the Malay Peninsula where they may be more numerous than spotted leopards.

They are less common in tropical Africa, but have been reported from Ethiopia, the forests of Mount Kenya and the Aberdares.

There are no authenticated cases of truly melanistic pumas.

Black pumas have been reported in Kentucky, Kansas and eastern Nebraska.

These are known as the North American Black Panther (NABP).

None have ever been photographed or shot in the wild, and none have been bred.

There is wide concensus among breeders and biologists that the animal does not exist.

The animal was spotted in a field surrounded by trees near Stroud by the onlooker, who says he was just 100 yards away when he captured the picture on his phone.

The man, who asked to remain anonymous, said: ‘I’m unsure what the animal was but it was certainly feline in it’s movement.

‘My first thought was that it was a family dog that had got out, so initially I wasn’t scared at all, but once I realised what it could be I snapped a couple of pics and quickly retreated.

‘I’ve never seen an animal like it before but it seems plausible that a large cat could be roaming the countryside.

‘It seemed to be playful and completely unaware of me in the minute or so that I observed it.’

Experts recently suggested pumas were behind a spate of sheep deaths in Wales, after examination of the corpses revealed they were ‘clinically’ killed – unlike a random dog attack.

There have been a series of reports made to the Puma Watch North Wales group since November.

A farmer found seven sheep slaughtered in his field in Snowdonia while other farmers in the area have also raised concerns over the way their livestock had been killed.

Big claw marks were also discovered – up to six feet above the ground – on trees. Big cats are thought to do this to sharpen their claws and warn off other predators.

Big cat enthusiast Frank Tunbridge has been studying the animals for some 25 years.

Mr Tunbridge believes big cats were released into the wild in the UK during and after the Dangerous Animals Act which was introduced in 1976.

The 73-year-old, from Podsmead in Gloucester, said: ‘This photo exhibits all the features of an Asian melanistic black leopard, sometimes referred to as a black panther.

‘The long tail with a slight tuft on the end is diagnostic to leopards.

‘However, this photo reveals a creature that has adapted to living and hunting fast moving deer in the UK.

‘It is slim, streamlined, long legged, with a smallish head, but still an efficient predator which has the tools for the job, with the teeth and claws.

‘This particular type of British big cat, like the one in the photo, reflects at least 80 per cent of the sightings that I have received over the years and, if genuine, now gives credence to either natural adaptation of a species, or a hybrid animal now breeding true to type and living and breeding within the British Isles.’

The eyewitness added: ‘I have heard that there have been similar sightings around the Stroud area. I decided I had to take the picture because I didn’t think anyone would believe me.

‘Two colleagues were with me but didn’t see the animal for themselves as they were working a few metres from me, they were in disbelief at the pictures.

‘I’ve no intention of going to find the creature again but I do regularly work in the area so I will most definitely be making sure I’ve got my wits about me.’ 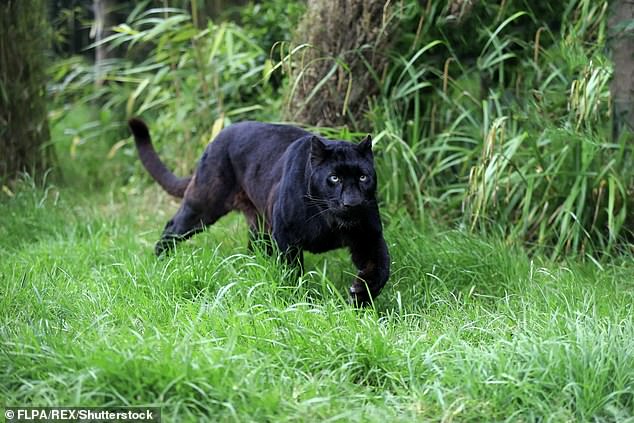 The real deal: A ‘black panther’ is not actually its own species—it is an umbrella term that refers to any big cat with a black coat

There have been similar claimed sightings of reported ‘big cats’ in the area over the years.

In 2018 Guillaume Lyons claims he saw a big cat on the tow path just down the road from this sighting, in Brimscombe.