The UK’s first prototype fusion power plant is a step closer to reality today, after five sites were shortlisted as the potential home for the pioneering technology.

Ardeer in North Ayrshire, Goole in Yorkshire, Moorside in Cumbria, Ratcliffe-on-Soar in Nottinghamshire and Severn Edge in Gloucestershire are all vying to be the location for what could be the world’s first working nuclear fusion reactor.

Using the same reactions that power the Sun, the nuclear fusion of hydrogen atoms into helium promises an almost limitless supply of clean energy.

Even though no such facility has yet been able to generate more energy than it takes to run, governments around the world are racing to build a commercial reactor in a bid to capitalise on what has been dubbed the ‘holy grail’ of green power.

A final decision on the location for the UK’s first plant will be made at the end of 2022, with the hope of beginning operations as early as 2040. 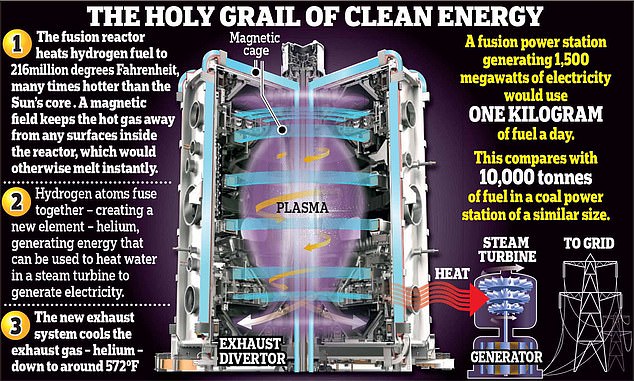 How it works: This graphic shows the inside of a nuclear fusion reactor and explains the process by which power is produced. At its heart is the tokamak, a device that uses a powerful magnetic field to confine the hydrogen isotopes into a spherical shape, similar to a cored apple, as they are heated by microwaves into a plasma to produce fusion 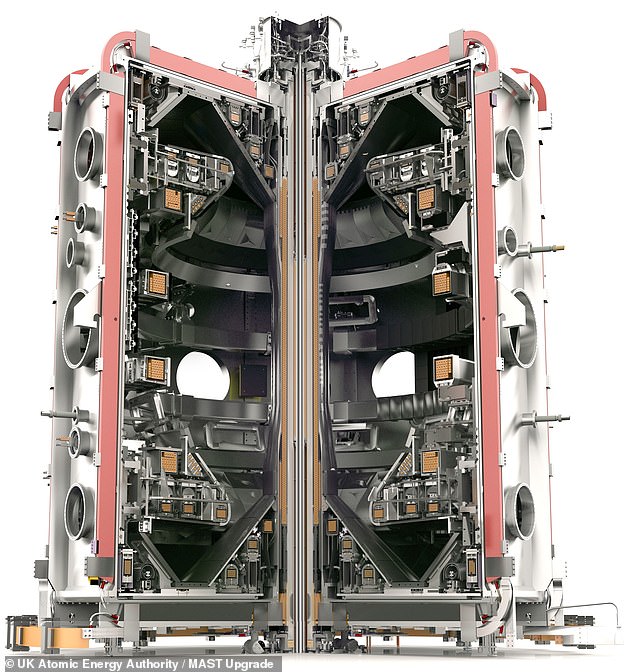 HOW DOES FUSION POWER WORK?

A small amount of deuterium and tritium (hydrogen) gas is injected into a large, donut-shaped vacuum chamber, called a tokamak.

The hydrogen is heated until it becomes an ionized plasma, which looks like a cloud.

Giant superconducting magnets, integrated with the tokamak, confine and shape the ionized plasma, keeping it away from the metal walls.

When the hydrogen plasma reaches 150 million degrees Celsius – ten times hotter than the core of the Sun – fusion occurs. In the fusion reaction, a tiny amount of mass is converted to a huge amount of energy (E=mc2).

Ultra-high-energy neutrons, produced by fusion, escape the magnetic field and hit the metal tokamak chamber walls, transmitting their energy to the walls as heat.

Some neutrons react with lithium in the metal walls, creating more tritium fuel for fusion.

Water circulating in the tokamak walls receives the heat and is converted to steam. In a commercial reactor, this steam will drive turbines to produce electricity.

Hundreds of tokamaks have been built, but ITER will be the first to achieve a ‘burning’ or largely self-heating plasma.

The UK government first announced a £200million investment into the development of the Spherical Tokamak for Energy Production — or ‘STEP’ — in October 2019.

George Freeman, minister for science, research and innovation said: ‘Fusion energy has the potential to be a truly revolutionary and inexhaustible energy source that can help us reduce our dependence on unreliable fossil fuels and tackle climate change.

‘By building the foundations to unlock the power of fusion energy, including the location of the UK’s first prototype fusion power plant, we are positioning the UK as a global leader in this safe and sustainable power source.’

Experts believe it can pave the way for the commercialisation of fusion and lead to the development of a fleet of future plants around the world.

The government also hopes the project will create thousands of highly-skilled jobs and attract other high-tech industries to the area, ‘furthering the development of science and technology capabilities locally and nationally’.

Paul Methven, STEP programme director at the UK’s Atomic Energy Authority, said: ‘The shortlisting of sites is a significant step for the programme as it helps bring this challenging, long-term endeavour to life in the here and now.

‘It also increases our focus as we push on with design and delivery of what we hope is the world’s first fusion power plant prototype.

‘Through the next phase of assessment, we look forward to working with the shortlisted sites and local communities to gain a more in-depth understanding of the socio-economic, commercial and technical conditions associated with each site, before we make our final recommendations to the Secretary of State in 2022.’

Last year a UK experimental fusion reactor powered on for the first time.

Eventually, however, the test reactor — which cost some £55 million to construct — will bring plasma to ten times this temperature.

While the experiment will not produce power itself, the hope is that the MAST Upgrade will allow experts to gather key data and test a new exhaust system for future fusion power plants.

Unlike current nuclear fission technology, fusion replicates the process at the heart of stars, and produces clean, renewable power without the toxic waste. 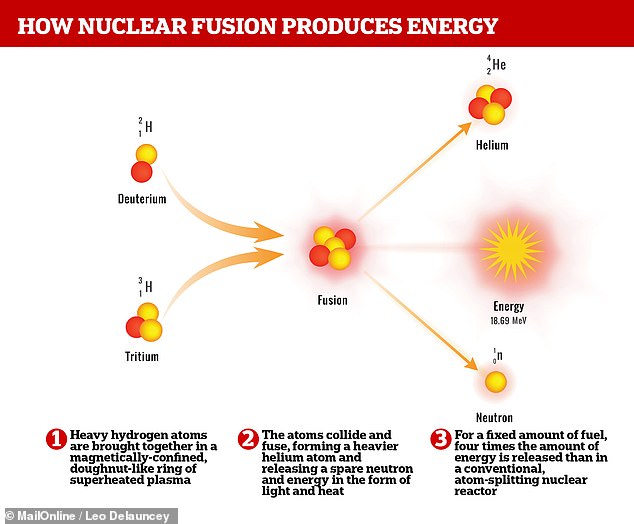 Fusion power works by colliding heavy hydrogen atoms to form helium — releasing vast amounts of energy in the process, as occurs naturally in the centre of stars

The race to create viable fusion energy is currently being led by ITER, an international nuclear fusion research and engineering megaproject, which is about 75 per cent of the way there.

ITER hopes to achieve net energy by 2026, after completing all the magnets for their tokamak – although the ITER project won’t sell energy, rather offer a blueprint for future fusion reactor designs to be used in any participating country.

Unlike existing fission reactors that produce radioactive waste and sometimes catastrophic meltdowns, proponents of fusion say it offers a clean and virtually limitless supply of energy.

If, that is, scientists and engineers can figure out how to harness it – they have been working on the problem for nearly a century.

Rather than splitting atoms, fusion mimics a process that occurs naturally in stars to meld two hydrogen atoms together.

In this case they use deuterium and tritium, and produce a helium atom – as well as a whole load of energy.

Achieving fusion requires unimaginable amounts of heat and pressure. One approach to achieving that is to turn the hydrogen into an electrically charged gas, or plasma, which is then controlled in a donut-shaped vacuum chamber.

Developing the new magnet is seen as the greatest technological hurdle to making that happen, as it is a key requirement in reducing the energy consumption of the generator itself and achieving net energy production.

HOW A FUSION REACTOR WORKS

Fusion is the process by which a gas is heated up and separated into its constituent ions and electrons.

For fusion to occur, hydrogen atoms are placed under high heat and pressure until they fuse together.

The tokamak (artist’s impression) is the most developed magnetic confinement system and is the basis for the design of many modern fusion reactors. The purple at the center of the diagram shows the plasma inside

When deuterium and tritium nuclei – which can be found in hydrogen – fuse, they form a helium nucleus, a neutron and a lot of energy.

This is done by heating the fuel to temperatures in excess of 150 million°C and forming a hot plasma, a gaseous soup of subatomic particles.

Strong magnetic fields are used to keep the plasma away from the reactor’s walls, so that it doesn’t cool down and lose its energy potential.

These fields are produced by superconducting coils surrounding the vessel and by an electrical current driven through the plasma.

For energy production, plasma has to be confined for a sufficiently long period for fusion to occur.

When ions get hot enough, they can overcome their mutual repulsion and collide, fusing together.

When this happens, they release around one million times more energy than a chemical reaction and three to four times more than a conventional nuclear fission reactor.

River Mimram turns PURPLE with pollution, hours after environment ministers posed in front of it

Sainsbury's bans fireworks across all stores as Tesco issues update –...