Fly-tippers who were caught dumping rubbish on the M6 motorway were escorted more than five miles back to their waste by police and forced to pick it up.

Eagle-eyed CCTV operators spotted three men dumping bags of rubbish on a grass verge next to an emergency refuge bay between junctions 12 and 13, near Stafford on Sunday.

Officers from Central Motorway Police Group caught up the trio, who were inside a Volkswagen Passat between junctions 14 and 15. 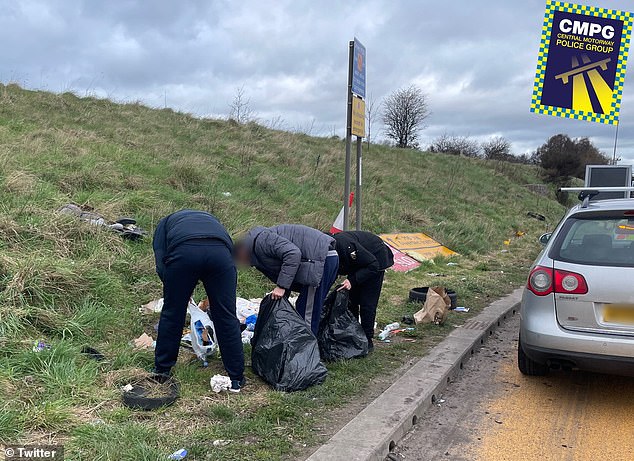 The car was then forced to travel back between five and 20 miles back to pick up their rubbish.

The red-faced trio were pictured bending down to pick up their piles of rubbish by hand after they were shamed by officers on social media.

CMPG officers tweeted: ‘M6 J12 to J13 a eagle eyed @HighwaysWMIDS who was monitoring the CCTV cameras notice the occupants of a Passat dumping rubbish in a ERA bay.

‘We intercepted the vehicle M6 J14 to J15 and escorted them back clear their rubbish up. Details passed to @EnvAgency’

Highways England Network Operations Manager for the Midlands, James Hawkes, said: ‘We spotted this blatant and reckless abuse of one of our designated emergency areas on our CCTV system and quickly passed it to the police.

‘We continue to work closely with our police colleagues who enforce issues like this.

‘Emergency areas are there for just that, an emergency.

‘They’re not there for people who fly-tip, which is highly irresponsible and illegal.’ 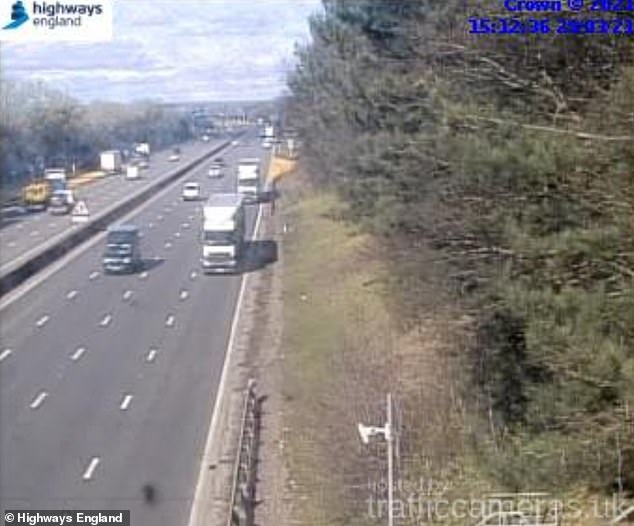 Keen-eyed Highways England CCTV operators saw the trio dump their rubbish on the side of the M6, before telling officers, who managed to catch up with the vehicle. Pictured: The M6 motorway

Web users took to social media to praise the officers for delivering ‘instant karma’ after images of the fly-tippers were posted on Twitter.

Jacqueline Weaver put: ‘I would love to have seen their faces when pulled over by you. Bloody fantastic work officers.’

Jim Sanbrooke commented: ‘Hahaha, what a bunch of tools. Got everything they deserved, I hope they were fined as well.’

Ann Williamson wrote: ‘Brilliant! Should have got them to pick up everyone else’s rubbish whilst they were there.’

Nick Williams added: ‘Absolute class guess it wasn’t a clean getaway for them.’