Anti-maskers in aisle 12! Fury as up to 30 ‘selfish conspiracy theorists’ film themselves without face coverings while shopping in Tesco during an ILLEGAL stunt advertised on Twitter

An anti-mask protest in a busy supermarket has been branded a ‘slap in the face’ to NHS staff after dozens of people flouted Covid restrictions and descended on a Tesco store in Essex.

Customers are required by law to wear masks inside all shops, unless they are exempt for medical reasons.

Footage of the group was filmed at the Tesco store in Princes Road, Chelmsford, on Saturday after the protest was advertised on social media.

An image posted on Twitter invited participants to ‘join us for a spot of maskless shopping’ describing it as: ‘A perfect way to peacefully protest while  buying your weekly groceries’. 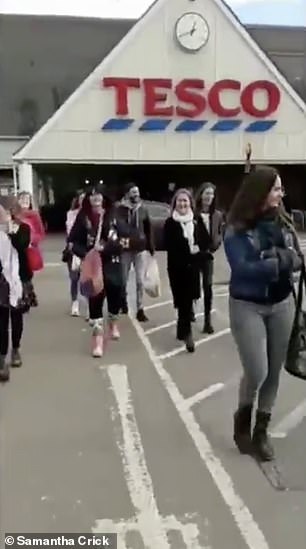 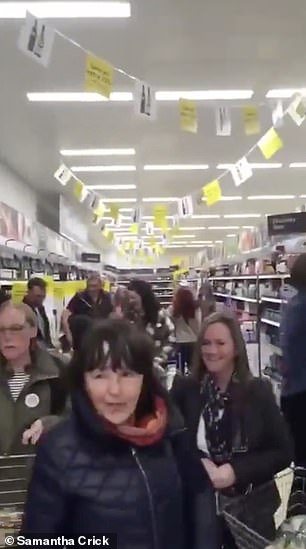 Dozens of protestors visited the Tesco store in Chelmsford, Essex, on Saturday to demonstrate against the use of masks. Footage of the event posted on social media shows people ignoring social distancing and rules surrounding face coverings

At least 34 people were understood to be involved in the organised demonstration.

Police were called out to the incident and spoke to the mask-less customers, with many claiming they were exempt from wearing face coverings.

A joint investigation has now been launched by city chiefs, police and Tesco to ‘review how this happened’.

The protest comes just two months after officials were forced to open a temporary mortuary in the city where more than 12,000 people have tested positive for Covid.

Clips show a red headed woman shouting ‘come on warriors’ in the Tesco car park as the group walk out of the store clutching baguettes, shopping bags and bottles of wine.

One video also features a bizarre song playing in the background with lyrics about ‘indoctrination camps’, ‘ vaccine scam’, ‘technocratic sham’ and ‘depopulation plan’.

Officials have blasted the group for endangering locals just as the nation can again see family and friends. 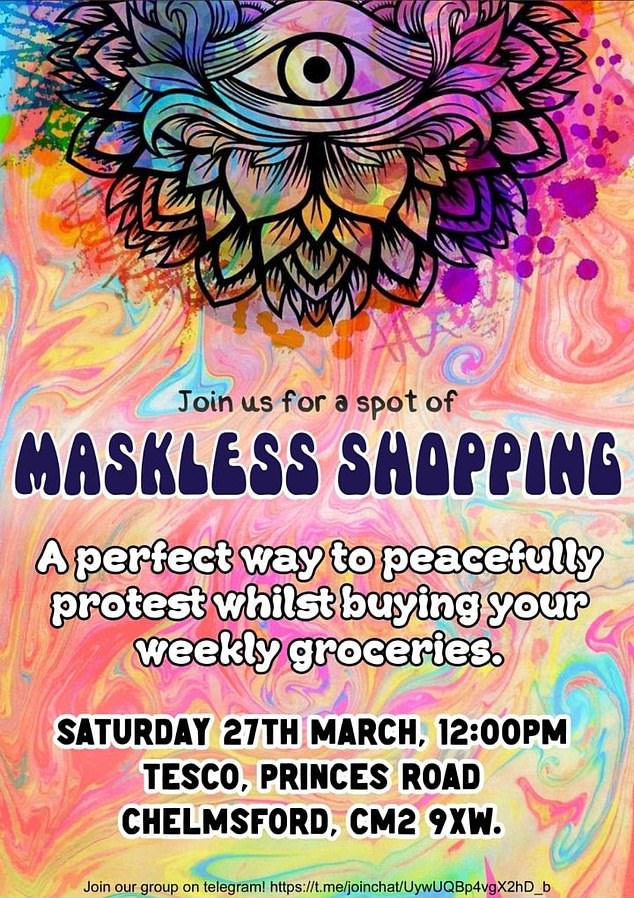 The event was advertised on social media with an image posted on Twitter inviting participants to ‘join us for a spot of maskless shopping’ and describing it as: ‘A perfect way to peacefully protest while buying your weekly groceries’

NHS Million, a grassroots campaign run by NHS staff to highlight gratitude of the health service, said: ‘This is a slap in the face to all NHS staff who have worked themselves into the ground and risked their own lives to keep people save.

‘Organising a maskless shopping trip is not big, not clever but it is illegal.’

‘Although lockdown restrictions eased slightly this week, it is extremely important that we all continue to stick to the rules in order to keep moving forward and avoid more people becoming ill or dying from Covid-19.

‘This action risked the health of many others: both those who were in the shop at the time and others with whom those people have come into contact since.

‘The incident was dealt with at the time by police and we are working with them and with the supermarket to review how this happened.

‘Chelmsford has patiently borne restrictions over the past year and residents do not deserve to be let down now by a small, selfish group.’ 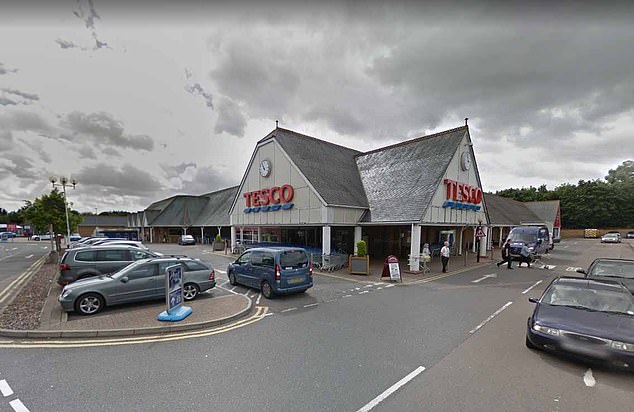 Police were called out to the protest, which took place at Tesco’s store in Princes Road, Chelmsford, on Saturday (pictured, stock image)

Tesco says its staff will encourage customers to comply with the law, but will not put themselves at risk if challenged.

A spokesman added: ‘Since the start of the pandemic, we have focused on ensuring everyone can get the food they need in a safe environment.

‘To protect our customers and colleagues, we won’t let anyone into our stores who is not wearing a face covering, unless they are exempt in line with Government guidance.

‘We are also asking our customers to shop alone, unless they’re a carer or with children.

‘To support our colleagues, we will have additional security in stores to help manage this.’

Essex Police were contacted by Mail Online for comment.