Short back and sides, Sir? Moment gang of cheeky jackdaws steal clumps of hair from deer in London park to build their nests

A gang of cheeky birds have been spotted pinching clumps of hair off the back of a deer before flying off to make their nests.

On the lookout for home-building materials, the clattering of jackdaws jumped onto the young buck and quickly started pecking away.

Adorable footage shows the fallow deer quickly getting annoyed with the pesky birds, and desperately tries to shake them off.

The clip was recorded by photographer Paul Browning in Bushy Park, west London, yesterday at the start of British summer time.

‘The ring leaders of the deer fur heist today,’ Paul quipped on social media alongside photos of the birds.

‘This deer was getting a bit annoyed and throwing them off.’

Bushy Park is the second largest of London’s eight royal parks, spanning 1,100 acres, and is home to more than 320 red and fallow deer.

Having gone through the winter rutting season and losing their long antlers, male deer are usually calmer during the spring season. 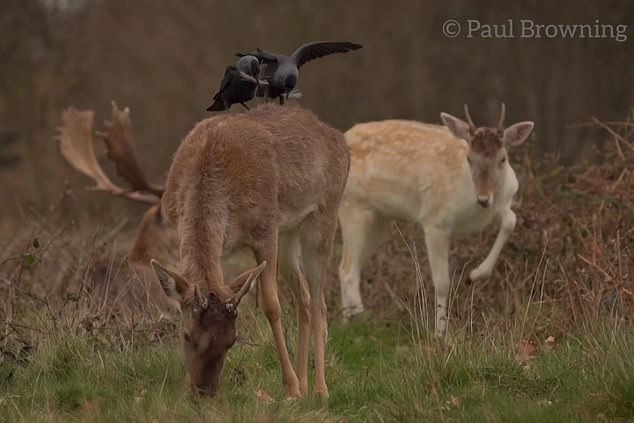 Adorable footage shows the young male deer in Bushy Park quickly getting annoyed as cheeky jackdaws descended upon and pinch clumps of his hair, causing him to desperately try to shake them off

Paul added that he was fascinated by the interaction between the deer and jackdaws on a previous visit, and had returned to the park to capture the birds pinching fur.

‘It was something I’d never seen before, the Jackdaws were stealing fur from the deer to build their nests and the deers didn’t mind at all!’

‘These are powerful and wild animals so we urge the public to show their respect by keeping a minimum of 50metres away, and to not photograph the deer at close range or feed them.

‘Currently, a large number of female deer are heavily pregnant, so now more than ever, its essential that visitors keep their dogs under close control at all times.’ 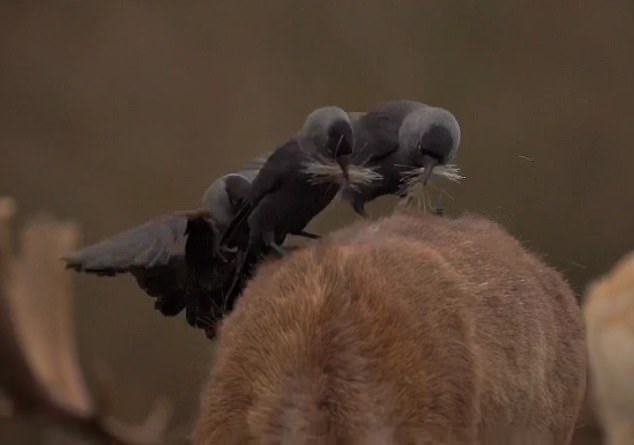 The clip was recorded by photographer Paul Browning in Bushy Park, west London, yesterday at the start of British summer time