The brother of Honduras President Juan Orlando Hernández was sentenced to life in prison by a New York federal court on Tuesday.

Assistant United States Attorney Matthew Laroche exposed Juan Antonio ‘Tony’ Hernández in the trial as the nucleus in one of the world’s largest and most violent drug conspiracies.

Hernández was convicted in October 29, 2019 of cocaine trafficking, weapons, and false-statements offenses charges that carried a mandatory minimum sentence of 40 years in prison.

In a tweet, President Juan Orlando Hernández accused the Drug Enforcement Administration of fabricating the evidence that was used to send his sibling to jail.

‘For the entire family, the news expected from NY will be painful,’ the Honduran leader wrote. ‘And what else can be said about a trial where the testimony of the prosecutors’ principal ‘cooperator’ has now been exposed by the DEA’s own secret recordings as a lie?’ 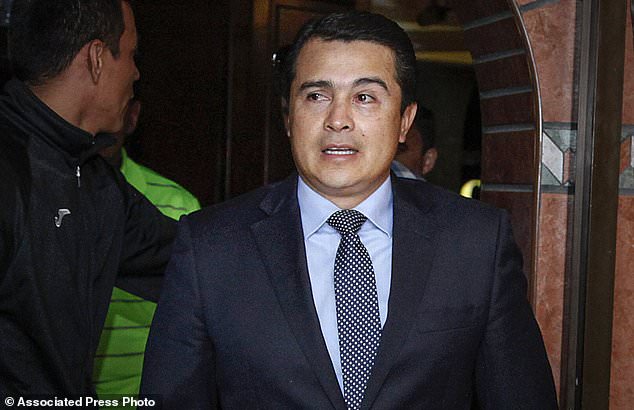 Juan Antonio ‘Tony’ Hernández, the brother of Honduras President Juan Orlando Hernández, was sentenced to life in prison by a federal court in New York on Tuesday. The former congressman was found guilty in October 2019 of cocaine trafficking, weapons, and false-statements offenses charges. Juan Antonio Hernández is pictured above at a press conference in Tegucigalpa, Honduras on March 16, 2017 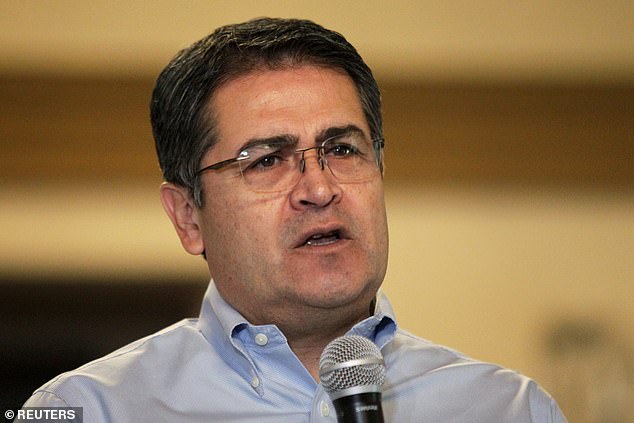 Honduran President Juan Orlando Hernández (pictured) slammed the Drug Enforcement Administration and said that the life sentence that was given to his brother, Juan Antonio ‘Tony’ Hernández, was unfair because the testimony of the prosecutors’ principal ‘cooperator’ has now been exposed by the DEA’s own secret recordings as a lie?’

Laroche said Juan Antonio Hernandez was the ‘central figure in one of the largest and most violent cocaine conspiracies in the world’ and added that for 15 years he was responsible for fueling a flood of cocaine shipments into the United States by paying millions of dollars to top Honduran officials like his brother.

According to Laroche, Hernandez’s actions had turned Honduras into one of the most dangerous places in the world. Hernandez, he added, turned to drug dealing even though he grew up well off.

He said Hernandez ‘can’t point to poverty, lack of opportunities or a need to support his family.’

‘He did it because he was greedy,’ the prosecutor said, adding that Hernandez has shown no remorse.

Hernández’s lawyer, Peter Brill, had argued for leniency and mercy for his client, saying the U.S. should focus anti-drug trafficking efforts on the ‘voracious appetite’ of its citizens for drugs.

Brill said Hernández ‘feels that the witnesses who testified against him were not only self motivated but were motivated against him … to make up as much as they could to ruin his life and the life of his family and have succeeded in doing so.’

In court papers, prosecutors had argued for a life sentence, citing his criminal history and saying he had transported at least 185,000 kilograms of cocaine, ‘a staggering amount of poison that he helped import into the United States.’ 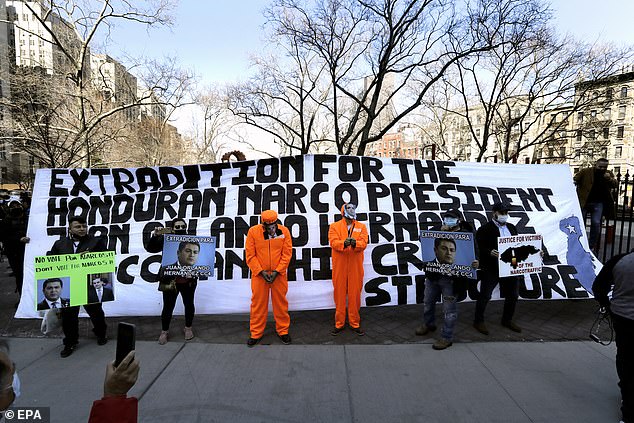 Supporters of Justice for Honduras gathered outside a Manhattan federal court on Tuesday moments before former Honduran congressman Juan Antonio ‘Tony’ Hernández, brother of the Honduran President Juan Orland Hernández, was sentenced to life in prison 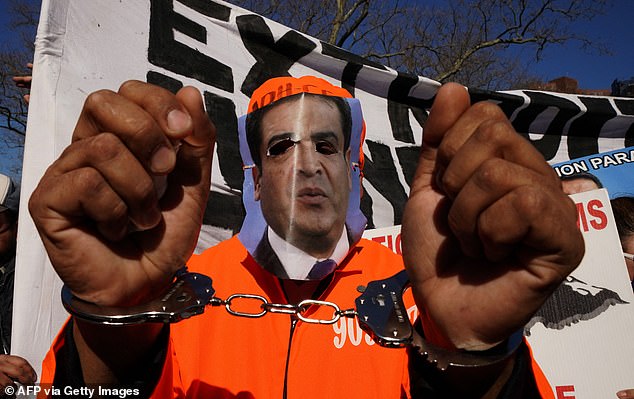 A demonstrators stands outside the U.S. District Court Southern District of New York with a cut out photo of Honduras  President Juan Orlando Hernández wrapped around his face after his brother, Juan Antonio ‘Tony’ Hernández, received a life sentence for a drug trafficking, weapons and false statement conviction and was instructed to pay back $138 million

They say Juan Antonio Hernández also sold weapons to drug traffickers, some of which came from Honduras´ military, and controlled drug laboratories in Colombia and Honduras.

‘Between 2004 and 2019, the defendant secured and distributed millions of dollars in drug-derived bribes to Juan Orlando Hernández, former Honduran President Porfirio Lobo Sosa and other politicians associated with Honduras’ National Party,’ prosecutors wrote.

‘Exploiting a high-ranking position in government to wield the power of the state to support drug trafficking is as nefarious as it comes,’ DEA Special Agent in Charge Wendy C. Woolcock said in a statement. ‘The conviction and sentencing of Tony Hernandez is a reminder there is no position powerful enough to shield you from facing justice when you violate U.S. drug laws by sending tons of cocaine to our country.’

His brother served as the leader of the Honduran congress before assuming the presidency in January 2014.

They allege that among those bribes was $1 million from notorious Mexican capo Joaquín ‘El Chapo’ Guzmán to Juan Orlando Hernández.

President Hernández has been mentioned as a co-conspirator as part of his brother’s criminal offenses, but has not been charged by the United States.

He has repeatedly denied any ties to drug traffickers, as has Lobo, whose son is currently serving a 24-year drug trafficking sentence in the U.S.

In an audio recording sent to his staff, which The Associated Press obtained, the president said his brother’s conviction ‘is hard for the family, hard for me personally.’

‘I find it outrageous, I find it unbelievable that false testimony by confessed killers could have been heard and given weight in this way,’ the president continued, citing Honduras´ progress in reducing violence as evidence of his stance against organized crime.

In court on Tuesday, Juan Antonio Hernández looked pale and downcast. When the defendant was given a chance to speak, he complained about his lawyers, saying he hardly saw them and they barely responded to his emails.

‘I feel I have been lied to,’ he said through a translator.

As Hernandez was led from the courtroom, a spectator yelled out: ‘Criminal! Just like your brother!’

Outside the courthouse, about 80 people with signs critical of the president of Honduras loudly protested.

Hernandez served as a member of the Honduran Congress from 2014 to 2018. He was arrested at a Miami airport in November 2018.