A bona fide national treasure must, of course, be prepared to ‘give back’ to society.

So when Dame Judi Dench was invited to become a Patron of the Countryside Restoration Trust, she leapt at the chance.

Her role at the charity, which campaigns for wildlife-friendly farming, would support two great loves of her life: the British countryside, and the work of her partner, a conservationist called David Mills, who is one of its trustees.

The Oscar-winning actress duly dressed up in her finest rambling gear and posed for photos with fellow Patron Hugh Fearnley-Whittingstall, declaring herself ‘privileged’ to be invited to promote the ‘tremendous’ Trust’s ‘pioneering work’. 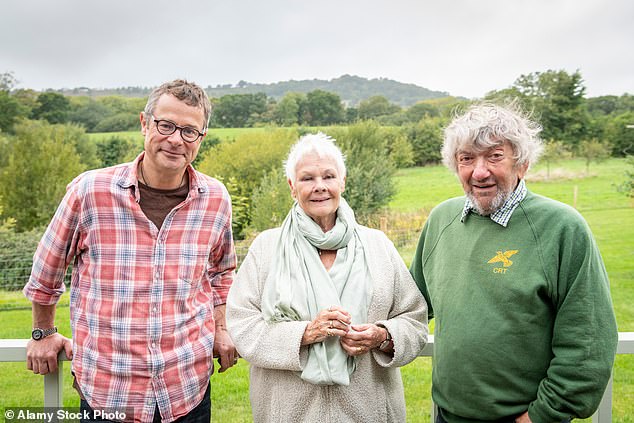 The Oscar-winning actress duly dressed up in her finest rambling gear and posed for photos with fellow Patron Hugh Fearnley-Whittingstall, left, while Robin Page is seen right

Yet rural Britain isn’t always green and pleasant: sometimes, you come across an angry farmer, and occasionally, muck gets thrown.

So it goes that, two years after she agreed to become the CRT’s celebrity figurehead, 86-year-old Dame Judi has been dragged into a toxic public dispute.

At the centre of hostilities is one such angry farmer: the formidable Robin Page, a best-selling writer, newspaper columnist, political campaigner and former presenter of the BBC’s One Man And His Dog.

Mr Page has devoted much of the past three decades to the charity, which he co-founded in the early 1990s to help undo damage to nature wrought by industrial farming. 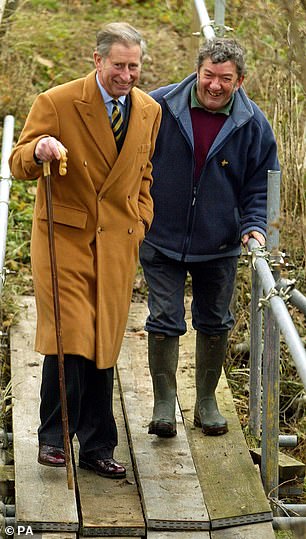 Prince Charles, a long-standing supporter and friend of Mr Page, spoke at the Trust’s organisation’s birthday party a few years back. But for how much longer will Mr Page be part of this illustrious organisation?

Today, it safeguards £33 million worth of farmland, covering roughly 2,500 acres, across 18 picturesque sites, and last year alone the Trust received more than £4 million in donations and legacies.

Prince Charles, a long-standing supporter and friend of Mr Page, spoke at the Trust’s organisation’s birthday party a few years back.

But for how much longer will Mr Page be part of this illustrious organisation?

For last week, the 77-year-old conservationist launched a furious attack on all five of his fellow members of the CRT’s board, who he accuses of plotting to have him ‘sacked’ from running it.

Caught firmly in his sights was Dame Judi’s partner, whom he also accuses of leading this hostile coup.

‘I love Judi to bits,’ says Page. ‘She’s wonderful. But her partner David Mills is one of the people agitating against me. We get on famously. But now her fella has decided that he wants to be top dog and so I am being bullied out.’

Hostilities between Page, on one side, and Mr Mills and fellow trustees, on the other, have been brewing for some time. But things escalated into outright warfare last Monday, when fellow board members wrote to Page saying they had decided to ‘terminate’ his paid role as the charity’s executive chairman.

A round of mud-slinging ensued, with allegations of highly-abusive behaviour (and worse) aired by both sides.

‘Robin is behaving like a tyrant, a despot,’ says Tim Scott, one of the trustees. ‘He’s decided that we are all out to get him, when in fact we’re simply trying to do our legal duty, to protect the charity and make sure it is run in a way that’s legal, which it can’t be if he’s both a trustee and a paid employee.’

In recent days, I gather, complaints were made to the Charities Commission, again by both sides. Page has also re-written his will to remove a bequest to the Trust of the cottage where he lives with wife Lulu, plus roughly 30 acres of meadow that surround it.

‘Genuinely, this is one of the nastiest disputes I’ve ever come across,’ says one informed source. ‘I cannot see how it can be resolved without seriously damaging the charity. It’s all very, very sad.’

To fully understand this ugly business — in which, it should be stressed, neither side is beyond reproach — we must wind the clock back almost 30 years to 1993, when Page used a newspaper column to ask for help to preserve a brook where otters had been spotted near to his village of Barton in Cambridgeshire.

Money flooded in, and he bought 20 acres of the site, promising to ensure that it was farmed in a ‘wildlife-friendly’ manner.

Working with Gordon Beningfield, a renowned wildlife artist, and the conservationist Sir Laurens van der Post, Prince Charles’s mentor and Prince William’s godfather, he then established the CRT to raise funds to extend this experiment to other corners of rural Britain where industrial farming practices have decimated bird and animal populations.

It would prove a huge success. Today, the Trust’s land near Barton covers 400 acres, and is now one of 18 sites it controls.

Things began to unravel, I can reveal, in 2017, when Page fell out with the Trust’s then recently appointed chief executive, Sarah Stannage. He became convinced Ms Stannage was somehow collaborating with the TV presenter Chris Packham — who campaigns against shooting and almost all forms of predator control — to place ‘woke’ animal rights activists into senior roles in the CRT.

Page’s fears escalated when he discovered that an employee she’d hired had, as her referee, one Mark Avery, who founded an anti-shooting organisation with Mr Packham called Wild Justice. The ensuing row led to both the departure of Ms Stannage and her finance manager in November 2017. Between them, they received redundancy payments of more than £30,000.

It also led to clashes between Mr Page and his fellow trustees, most of whom did not believe any attempted infiltration had occurred. Three quit that year, and another two the year after.

They were replaced by various acquaintances of Page, including (in 2018) Mr Mills, a former farmer who founded the British Wildlife Centre and had become Dame Judi’s partner following the death of her actor husband Michael Williams in 2001.

The new board decided that, to fill the boots of Ms Stannage, Mr Page would serve as executive chairman of the CRT on a consultancy that paid him by the hour.

‘With Robin, you either do things his way or no way,’ says Tim Scott. ‘All the trustees have been hand-picked by him, and most of us have been friends for years, but a common theme is that pretty soon they find themselves being given the Alex Ferguson hairdryer treatment [an angry verbal reprimand].’

Earlier this year, a dispute over an article that Page had submitted to the CRT’s magazine escalated to a point where he was told that his contract with the charity was in conflict with rules that generally forbid trustees from profiting from their role.

They therefore proposed removing him as executive chairman and giving him a different job instead.

Things then quickly went nuclear. Page hit Twitter: ‘I am being bullied out of the Countryside Restoration Trust by a group of greedy elderly men who simply want to take the Trust away from its members. Astonishing. We are talking about greedy people with enormously inflated egos.’

Several CRT members responded with outrage, pledging to quit the organisation, or to remove large bequests to it from their wills.

Page is, for now, sticking doggedly to his guns. So, too, are trustees.

Unless a solution to this impasse can be found, the future of the very worthy charity that Prince Charles and Dame Judi adore is gravely under threat — thanks, one might argue, to one man and his dogma.