Hailey Bieber gave her Instagram followers an intimate look into her personal life with a collection of photos that were shared to her account on Saturday.

In the snaps, the 24-year-old social media personality was seen enjoying ‘some fall things’ in various settings and with a few of her loved ones, including her husband, Justin.

The model notably included a baby photo of herself at the very end of her collection, in which she was seen getting a bit of rest. 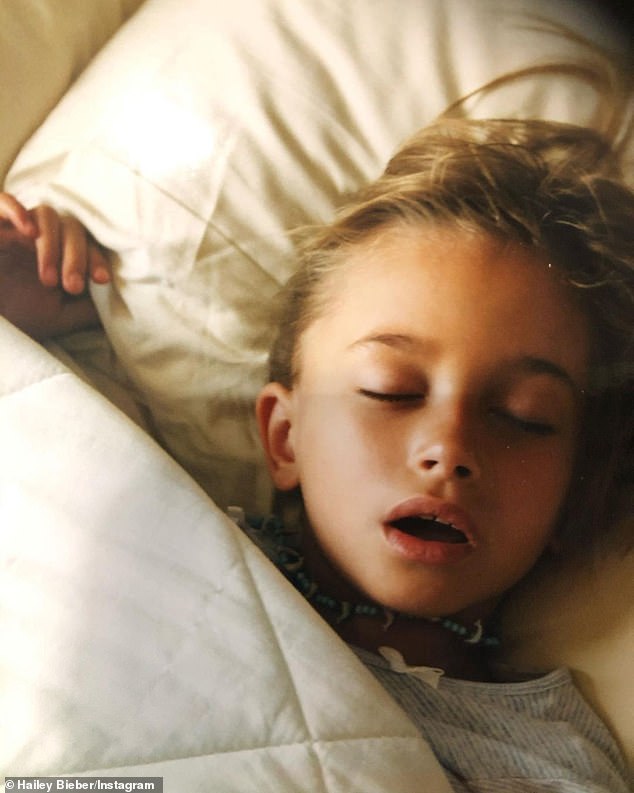 Looking back: Hailey Bieber showed off a baby photo and several other intimate moments with a photo collection that was shared to her Instagram account on Saturday

Several of her fans made comments about the throwback photo, with one user writing: ‘It’s baby hails for me.’

Emily Ratajkowski also showed her appreciation for the collection and simply commented ‘last one’ in reference to the shot from Bieber’s younger days.

A third user referred to the toddler version of the model as a ‘sleeping beauty.’

The social media figure’s first shot from the collection showed her taking a photo of a friend who took the shot itself, and she beautifully contrasted a red puffy Chanel jacket with a pair of light blue jeans. 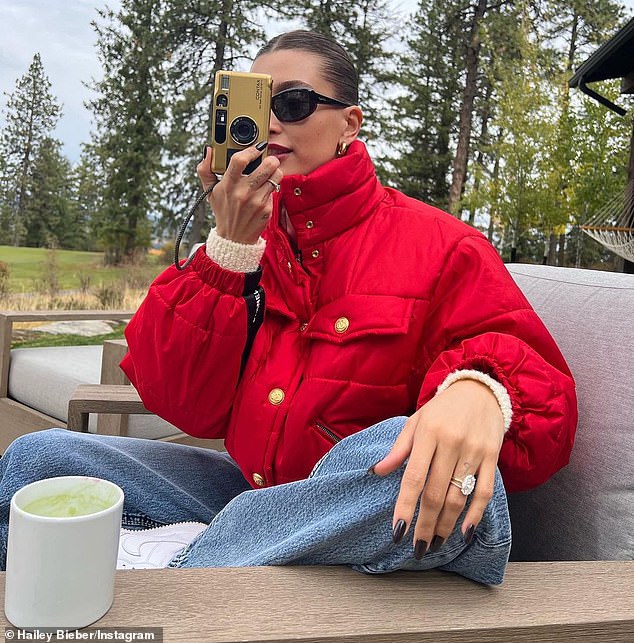 Comfortable clothing: The social media personality contrasted a red puffy jacket with a pair of blue jeans in one of her shots 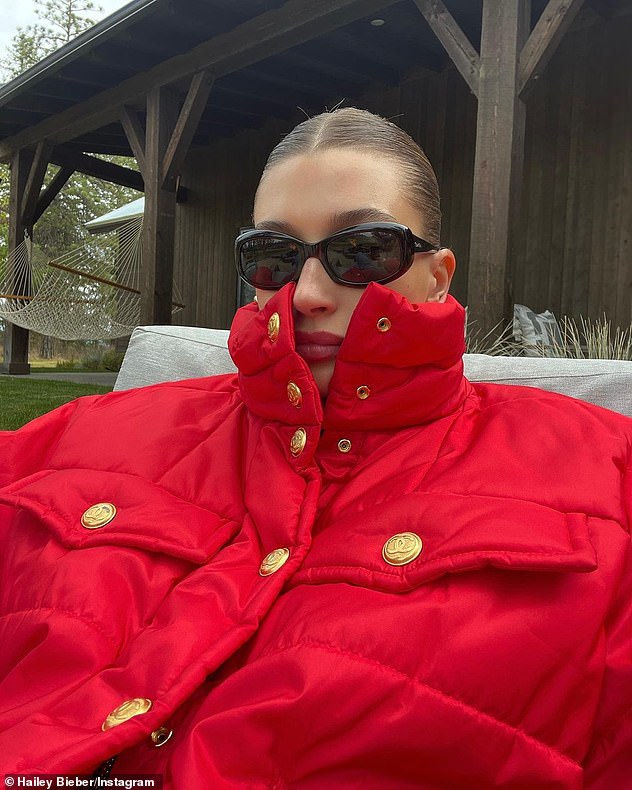 Shining bright: The model made a point of accentuating the colors of her outfit with numerous articles of gold jewelry

Bieber made a point of accentuating the eye-catching tones of her clothing with numerous articles of gold jewelry, and she prominently showed off her wedding ring.

She also sported a pair of black sunglasses and tied her gorgeous blonde hair back as she spent time in the crisp autumn air.

In another shot, the model was spotted holding her dog Oscar while sitting on a swing next to her pal Kelia Termini.

The media figure let her long locks flow freely and wore a large black sweater as she hung out with her friend. 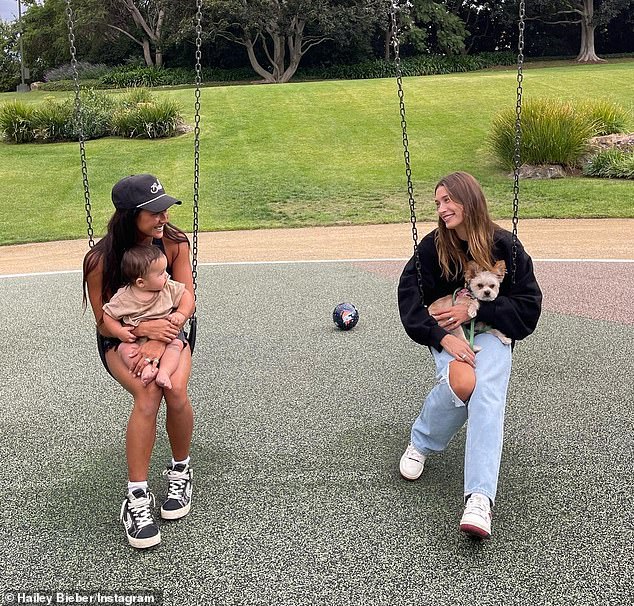 Quality time: In one of her shots, Bieber was seen cutting a casual figure while hanging out with her pal Keila Termini

Bieber made sure to include a photo with her husband, and she sported a nearly all-black outfit that included a long leather coat and matching pants, as well as a string bra.

She added a little bit of contrast to her clothing ensemble with a pair of green-and-white sneakers, and she also wore a stylish set of sunglasses.

Her husband, 27, opted for an oversized green athletic jersey worn above a baggy pair of blue jeans.

The Sorry singer also wore a set of running shoes and a large brown beanie while he planted a kiss on the side of his wife’s head. 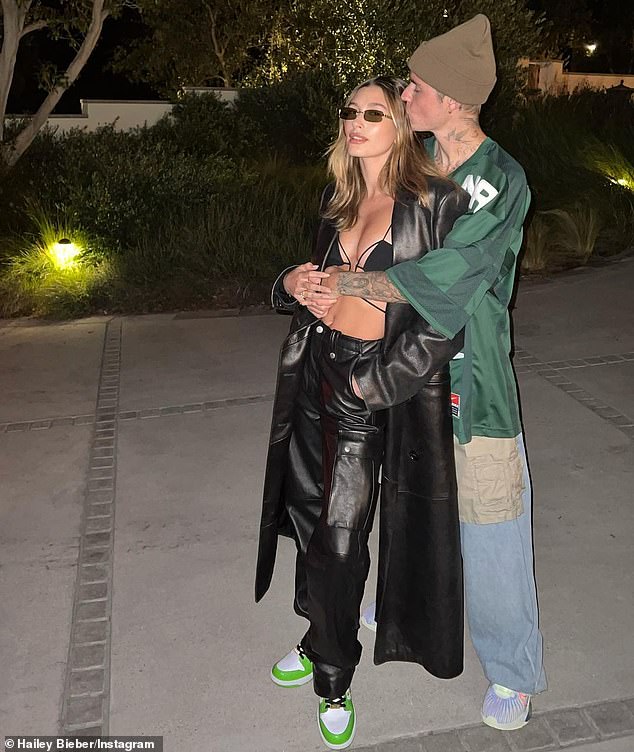 Happy couple: Bieber also shared a shot of her husband Justin planting a kiss on the side of her head with the rest of the collection 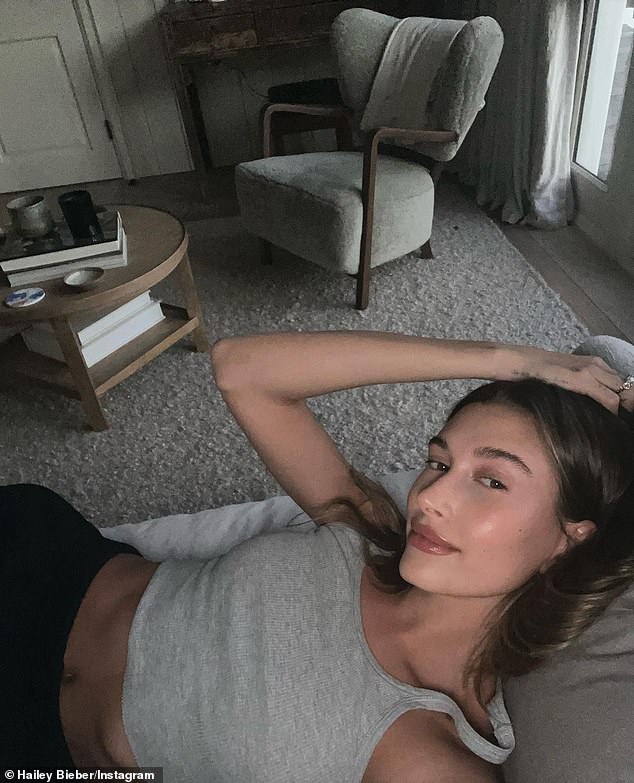 Taking it easy: The model also shared several lighter-hearted snaps, one of which showed her laying on a couch

Bieber also included a few lighter-hearted snaps with the collection, and she was seen relaxing on a couch while taking a selfie in one of them.

The model kept it casual in a gray undershirt and black sweat pants while enjoying a bit of alone time.

She also shared a selfie that featured a filter that added a pair of sunglasses and a set of fangs to the image.

The social media personality added a text graphic to the image that simply read: ‘Happy Halloween.’ 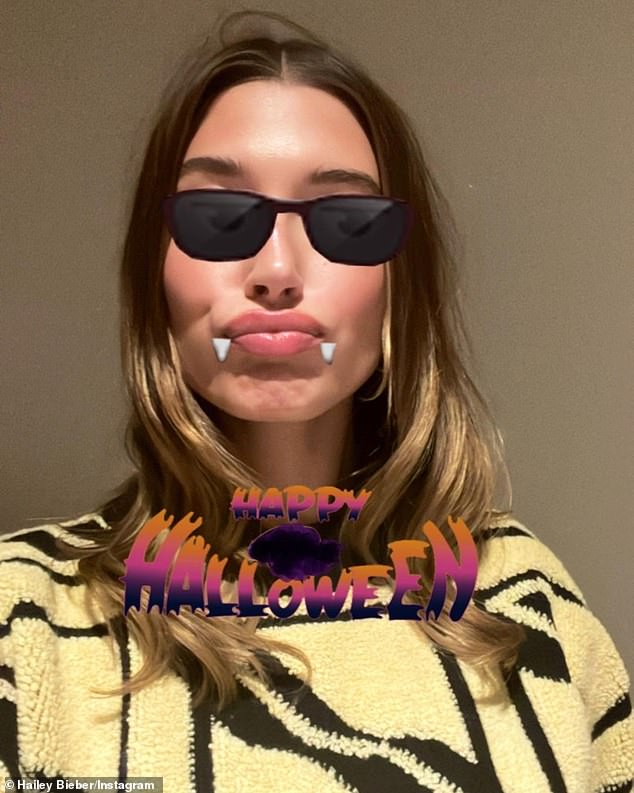 Time of the season: Bieber also shared a selfie that included a text graphic that read: ‘Happy Halloween’