Whichever way you spin it, Harry Kane is contemplating a huge summer. First up is the delayed Euro 2020, with semi-final and finals at Wembley.

That in itself has the potential to be a life-defining event for the England captain. Yet there is also one rather significant issue that lingers unresolved and that is his future at Tottenham.

There may be a fear that one will impact on the other; that a summer of endless transfer talk will distract him from his immediate goal, winning the European Championship. 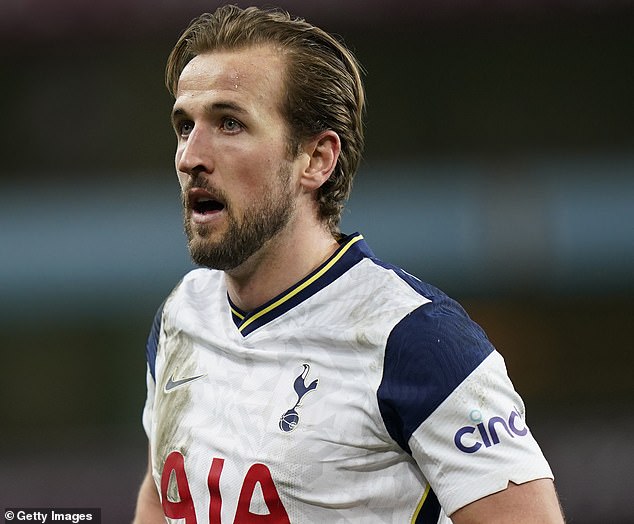 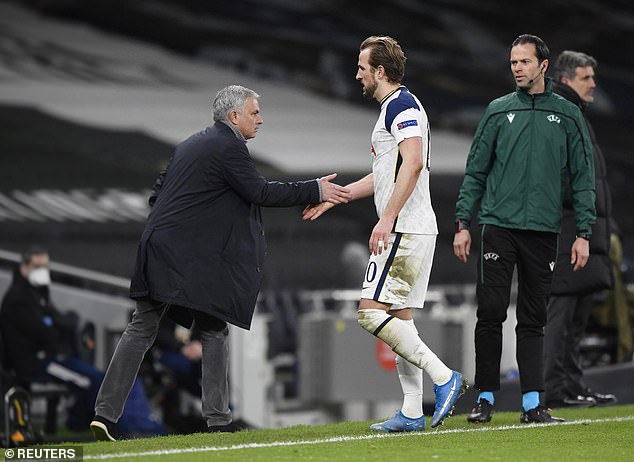 Kane, who has yet to win a trophy but will play in Carabao Cup final, is under contract til 2024

Kane, who has yet to win a trophy but will play in the Carabao Cup final against Manchester City next month, is under contract until 2024 at Spurs. But with his team unsure of Champions League football next season and unlikely to be title contenders in the near future, Kane will have to decide whether he sticks it out at his boyhood club or moves to a team more likely to challenge for trophies.

This summer, when he turns 28, would seem to be the logical time to do so. ‘I think that’s a hard question to answer right now,’ said Kane as he prepared to lead England in their World Cup qualifier against Albania in Tirana on Sunday.

‘It’s important that all my focus is on the two England games coming up now, the rest of the season with Spurs and then the Euros.

‘To be thinking about speculations or rumours would be damaging in terms of my own performance. I always like to be focused on one goal and one job and that’s to finish strong with Spurs, win these qualifiers with England and hopefully go on and have a great Euros.

‘Look, I try to stay out of that speculation as much as possible. I’m fully focused on doing the job on the pitch from now until the end of the summer and then we’ll see where we go from there.’

Paris Saint-Germain, where his former Spurs manager Mauricio Pochettino is coach, are likely to express an interest in Kane this summer and though Manchester United and Manchester City have prioritised signing Erling Haaland, whoever misses out on the Norwegian centre-forward are expected to consider Kane, who would doubtless cost a British transfer record of at least £120million. 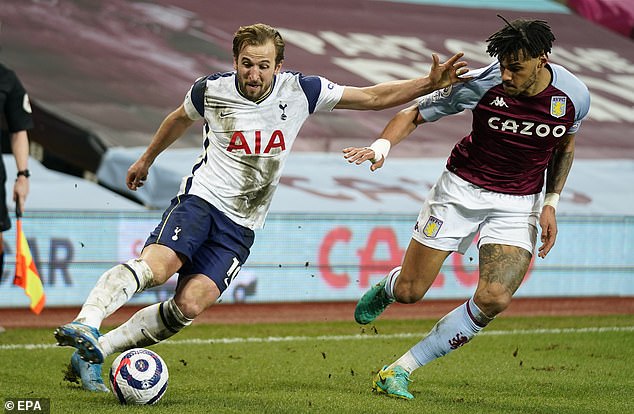 Kane did make it clear that he believes Spurs can still redeem this season by winning their first major trophy since 2008 and qualifying for the Champions League. ‘It’s been a difficult spell at Spurs but, look, we went into the Arsenal game winning five games in a row,’ he said.

‘Obviously, the Arsenal game was a difficult one to take — in a north London derby you never want to lose — and then of course the Europa League where we went out was a big disappointment.

‘But we bounced back on Sunday with a win and I think, when you look at the bigger picture, we’re a couple of points off the top-four places and we’ve got a cup final to play. So, if we’re looking at it at the end of May and we’ve finished in the top four and won the Carabao Cup, I think everyone will say it’s been a pretty good season. 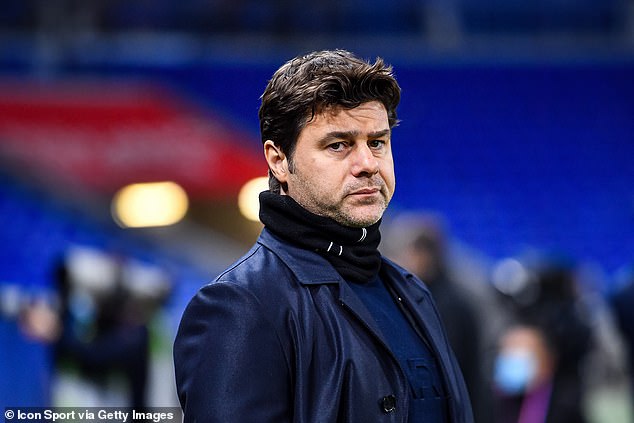 PSG, where former Spurs boss Mauricio Pochettino is coach, are likely to express an interest

A Spurs fan since childhood, he has scored 215 goals for the club, just 51 behind Jimmy Greaves’ all-time Tottenham record, a figure he might be capable of passing next season. But to be 27, a World Cup Golden Boot winner, acknowledged as one of the world’s best strikers but having no trophies is a mightily uncomfortable place to be.

He can’t help but cast an envious glance at England team-mate Phil Foden, just 20, who is about to win a third Premier League title and who started last year’s League Cup final win. Or, at Trent Alexander-Arnold, who has won the Premier League, Champions League, World Club Cup and UEFA Super Cup all by the age of 22.

Maybe he can take some solace in the career of Robert Lewandowski, the Poland striker he will be up against on Wednesday at Wembley. 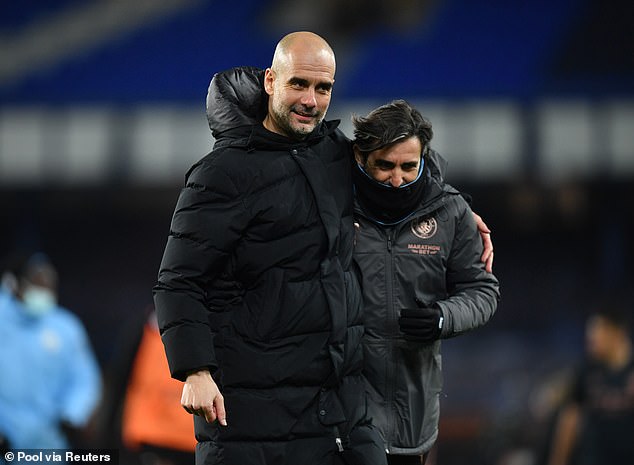 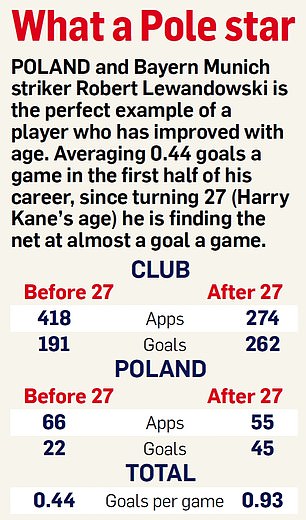 An inspiration then? ‘Absolutely,’ agreed Kane. ‘I think Lewandowski is a fantastic player. Incredible finisher, great movement, and his all round game is fantastic. And you’re seeing that year on year, the goals he scores and the contributions he has to the team.

‘A lot of them have been in the last five years and I feel nowadays, that there is no reason why you can’t be hitting your prime early 30s. You look at Lewandowski, Ronaldo, Messi, a lot of the players coming into even better form when they’re hitting their 30s.

‘So that’s what I want to be doing. I’m 27, still feel like I’ve got plenty more years to go, and learn, and improve. So when I look at players like that it only gives me more motivation to do it as well. I certainly feel like I’m in a place where I can do that and play for hopefully many more years to come.’ 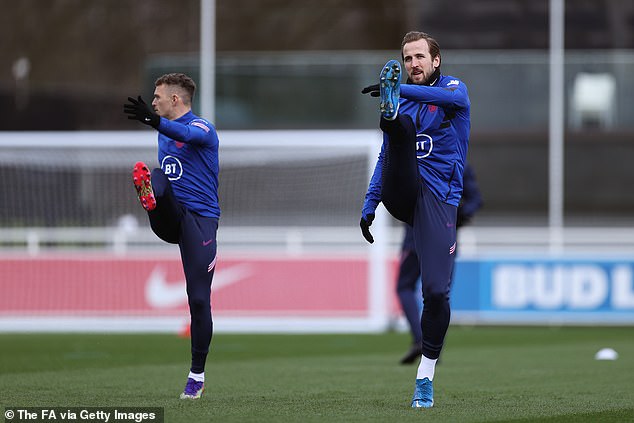 Under Jose Mourinho his game has developed this year. Dropping deep at times, his combination with Son Heung-min has been devastating; one of the positive and consistent features of Tottenham’s season.

He has 33 Premier League assists with Spurs and 13 of those have come this season, nine of them for Son. With players such as Raheem Sterling, Marcus Rashford, Jadon Sancho offering pace and intelligent timing of runs, like Son, Kane believes his England role has also evolved.

‘I think this year you’ve maybe seen me drop in more and maybe getting more assists and creating more chances but if you look over the last couple of years, especially the Euro campaign, the qualifying campaign, there were games where I was getting quite a lot of assists and goals and I was dropping into that No 10 pocket and people like Raz [Sterling] and Jadon [Sancho] and [Marcus] Rashford were running in behind.

‘We have a really good connection so with the players we have, there’s no reason why I can’t create chances, get assists and help the team out in that aspect as much as possible.’ 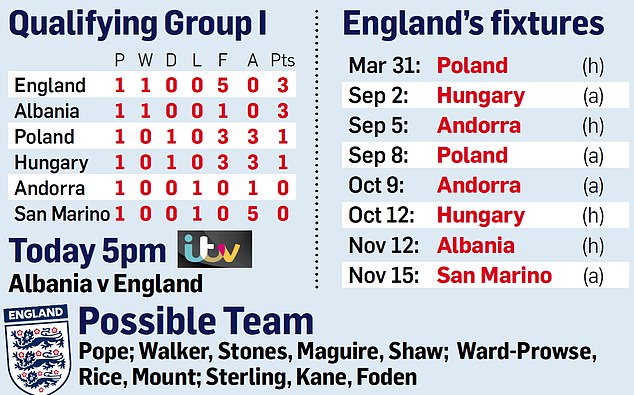 ‘You’ll probably seeing this season an evolution of that and probably feel at my best mentally, in terms of where my game’s at, being confident on the pitch and scoring goals, assisting goals, defending.

‘I always feel like I can have an impact on the game. I’m definitely at that stage in my career I’m always someone who has said I can improve year in, year out and that’s what I feel like I’ve done.

‘I’m not the finished article by any means but I’m at a very good place at the moment and hope I continue that and get better and better over the next few years as well.’

Of course, for Kane this is much more than a personal issue. The 2016 European Championship, Kane’s first major tournament, ended in the humiliation of the 2-1 defeat by Iceland. 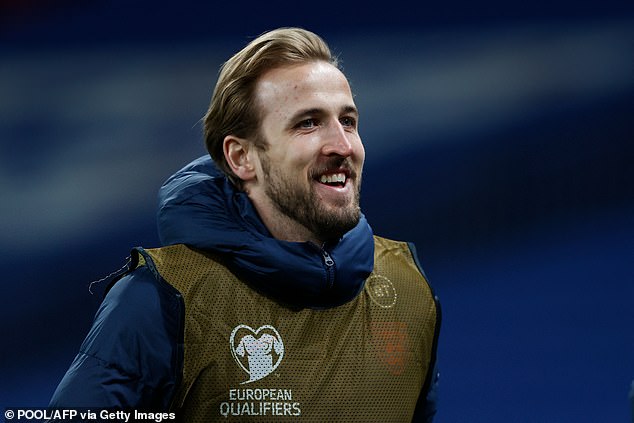 ‘I was bitterly disappointed in how it went as a team and how it went for me personally as well. It was great to have the World Cup in 2018, to score there and be a big part of that. Hopefully I can follow that up with another great tournament in 2021.

‘The aim for us and the manager when he came in was to try to become the No 1 side in the world and we have taken steps towards that. We have definitely improved over the last four or five years.

‘We had a great World Cup and with that comes added pressure but if we want to be the best and we want to win tournaments, then we have to cope with that pressure. We have to go into finals with full belief in ourselves, which I feel we have, and go on to achieve something special.

‘When you finish your career, that’s what you want to have on your CV, you want to have an England trophy on there. We haven’t won a trophy as a national team for a long, long time and when you look at the players we’ve produced and have playing year in year out we have the best in the world so if I got to the end of my career and I haven’t won a trophy with England I’ll always look back and probably regret that.’

Albania on Sunday and Wembley in the summer. That’s plenty to be getting on with. Just those issues to resolve as well and all will be well.