The UK watchdog labelled both ‘Don’t Buy’ products after testing the SPF and UVA performance of 15 branded and own-label adults’ (SPF30) and kids’ (SPF50) lotions.

SPF — or ‘sun protection factor’ — is a measure of how much a product protects against harmful UVB rays which cause sunburn, premature skin aging and cancer.

According to Which?, repeated tests of Nivea’s ‘Kids Protect & Care’ failed to meet the SPF50+ claim advertised on its bottle.

And while passing its SPF test, Garnier’s ‘Ambre Solaire Clear Protect’ narrowly failed two tests to see if it offered its advertised level of UVA protection.

Like UVB rays, UVA can also cause skin aging and cancer. Unlike their counterpart, however, they are also able to penetrate glass.

Of the other products tested, the most economical were Asda’s Protect Cooling Clear Sun Mist and Wilko Suncare Sun Lotion, which retail at £3.50 and offer SPF30.

In the SPF50 bracket, Boots Soltan Kids Protect & Moisturise Suncare Lotion was the cheapest product tested, being sold for just £4.

To cover the whole body, the WHO recommends wearing around seven teaspoons’ worth of sunscreen 15 minutes before going outside, reapplying every two hours. 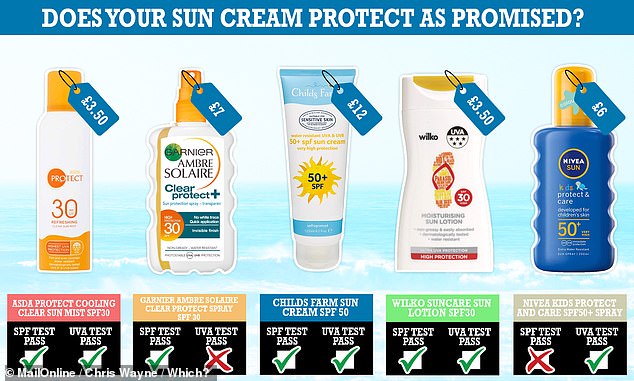 ‘Whether you’re finally off on holiday or staying at home this summer, it’s important to stock up on sunscreen to keep your skin protected from harmful rays,’ said Which? magazine editor Harry Rose.

‘But our research shows consumers cannot always trust that these essential products will provide the level of protection they expect for themselves and their children,’ he added.

It is concerning that two sunscreens from respected brands have failed Which?’s tests. We would advise consumers not to buy these products.’

‘There are alternatives available that are both cheaper and performed better when we tested them,’ he concluded.

In their study, Which? researchers subjected the 15 products — which included, for example, Childs Farm Sun Cream SPF50+ and Boots Soltan Protect & Moisture Spray — to the British Standard tests for their advertised levels of UVA and SPF protection.

To test SPF protection levels of a given sunscreen, the product in question is applied to the backs of at least 10 volunteers who are then expose to light from a UVB lamp.

The researchers recorded when skin reddens and how much UVB was required both with and without the sunscreen — the difference pf which gives the SPF.

UVA protection, meanwhile, is tested by spreading a thin film of the chosen sunscreen across a rough glass plate, which is then placed in between a UVA light source and a detector as to measure how much radiation the lotion absorbs.

‘To pass the test this needs to be a minimum of one-third of the SPF,’ Which? explained. 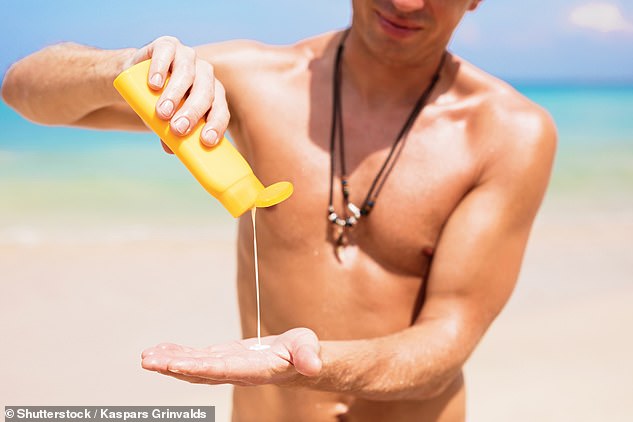 To cover the whole body, the World Health Organisation recommends applying around seven teaspoons’ worth of sunscreen 15 minutes before going outside

In response to the Which? findings, a spokesperson for Nivea owner Beiersdorf said that the safety of their products was of the ‘utmost importance’.

‘Nivea Sun prides itself on its decades of experience in sun care and is dedicated to developing products that reliably and effectively protect against sun damage.’

‘When this product was independently tested in 2019 it achieved an SPF of 62. When we re-checked this batch, the result was a UVA protection factor of 25.8.’

‘Based on this data and our comprehensive quality requirements, we disagree with the reported Which? findings,’ they concluded.

‘Garnier Ambre Solaire has been the expert at suncare innovation for over 85 years and is the only suncare brand with research recognised by the British Skin Foundation. We take product efficacy very seriously,’ they added.

‘Our UVA claims are supported by robust photoprotection testing carried out independently under ISO standard ISO 24443:2012 and meet the requirements of the European Recommendation for sun protection products.’

‘Given this, we are very surprised by the Which? results and have requested a meeting with the Which? researchers so our scientists can take them through our test results which confirm the efficacy of this product.’

HOW TO STAY SAFE IN THE SUN

It can happen abroad or in the UK.