Police have warned people not to approach a group of ‘very fast and aggressive’ rheas that are running wild across two sleepy villages.

Hertfordshire Constabulary told members of the public not to go near the 20 ostrich-like birds in Maple Cross and Croxley Green.

The animals, which stand at 5ft and can reach 40mph, have been causing chaos across housing estates near the M25 for the last two weeks.

Officers have searched for the owner of the birds but have now concluded they are wild. 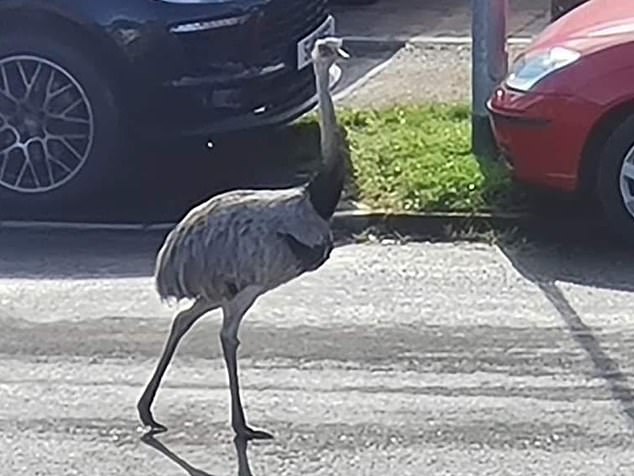 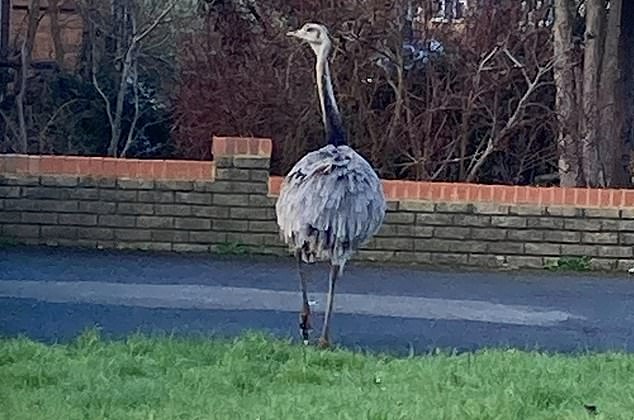 The animals, which stand at 5ft and can reach 40mph, have been causing chaos across housing estates near the M25 for the last two weeks

PC Christian Gottmann, from Rickmansworth and District Safer Neighbourhood Team, warned the public of the danger they pose.

He said: ‘We would advise the public not to approach these animals as they are very fast, much like their larger counterparts, and can be aggressive if cornered.

‘Unfortunately we have received reports of them attacking dogs and deer, so we ask that dog owners are vigilant when out walking.’

Reports earlier this week spoke of one bird that went into Rickmansworth town centre and knocked on front doors with its beak.

Harry Wicks, who works at CW Wildlife Rescue in Rickmansworth, said they were the ‘talk of the town’.

The 24-year-old said of one of them: ‘The bird is out there running around the villages.

‘It has been spotted loads and loads of times it even went up to one of those motion-detecting camera doorbells and pressed the doorbell with its beak before running off.’

He said the bird has been spotted running along the roads through the villages playing ‘chicken’ with the cars. 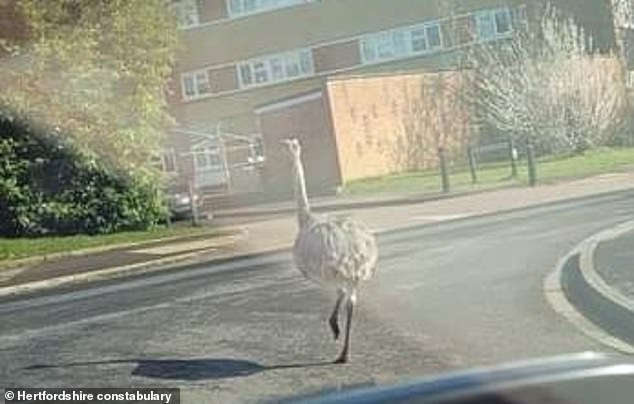 He added: ‘The bird is also running around on the roads and causing havoc with drivers. There aren’t many options for us to try and catch it as they run pretty fast.

‘A tranquilliser dart could be used, but I certainly wouldn’t fancy trying to catch one as they’ve got a big claws.’

He added: ‘Someone will have to do something at some point as we are only a few miles from the M25 and if it got onto the motorway there would be chaos.’

Last weekend locals set up a Facebook page for the giant bird, calling it ‘Chris the Reah, a personal blog’ so people could add photos and sightings of the bird.

It is believed the bird has been on the loose for around a year after escaping from a nearby farm – but it has only been sighted again in the past fortnight.

Writing on the Chris the Reah Facebook page, locals said they decided to call it Chris because it is a ‘gender neutral name’ as they don’t know if it is a male of female bird.

The Facebook page warns locals: ‘Do not try to catch Chris. He can run a lot faster than you at 37mph. 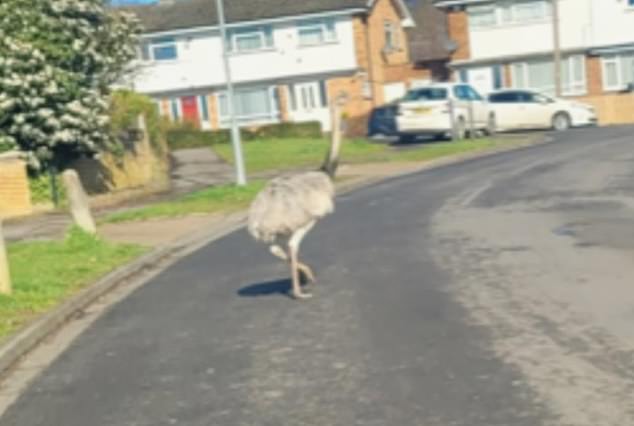 PC Christian Gottmann, from Rickmansworth and District Safer Neighbourhood Team, warned the public of the danger they pose

‘He could attack you and cause damage. He might look cute but he does come with a warning.’

Daniela Mistretta posted a photo of the rhea walking down the middle of a residential road last Saturday.

She added: ‘It’s there pretty much every day, I have the pleasure of seeing it from my house and it payed us a visit down our road today.’

On March 18, Amanda Mcloughlin claimed she had seen the rhea for three days in a row.

She added: ‘On my morning dog walks this week in Maple Cross in the farmer fields I have spotted this!

‘At first I thought it was an ostrich but now think it’s a rhea. It definitely can’t fly as my dog tried chasing it! Three days running now I’ve seen it.’

Callum Lee, of Rickmansworth, posted an image of the rhea outside his home on last Friday. He wrote: ‘Bloody neighbour!! Who’s lost an Ostrich?’

Ed Doherty posted a photo of a rhea – which he thought was an ostrich – as it was about the cross a road. He wrote: ‘Anyone lost an ostrich in Maple Cross?’