Sitting in a quiet corner of a Wetherspoons pub near Paddington Station, the small group attracted little attention from other customers.

But for a fresh-faced 17-year-old boy who sat sipping a Coca-Cola beside a bricklayer and a bouncer, listening to the tales of a handsome, charismatic stranger, it was ‘an awakening’.

Benjamin Hannam, now 22, would later describe his excitement at the fateful first meeting with the neo-Nazi group, National Action, on March 6, 2016, writing in his diary they are ‘a good bunch of lads’ and he ‘can’t wait to get more involved’.

Within two days of watching propaganda videos by the banned terror group, Hannam was ‘completely swayed’, eagerly describing his ideology to other members as ‘fascist’.

Two years on, Hannam was in uniform patrolling the streets of London as a probationary Scotland Yard officer after somehow managing to pass the vetting process – despite secretly continuing to download Nazi material including a cartoon of a schoolchild writing ‘I miss u Hitler’.

Yesterday, Scotland Yard was struggling to explain how the neo-Nazi recruit managed to slip under the radar.

But to understand Hannam’s terrifyingly short journey from teenage fascist to terrorist, it is necessary to go further back. 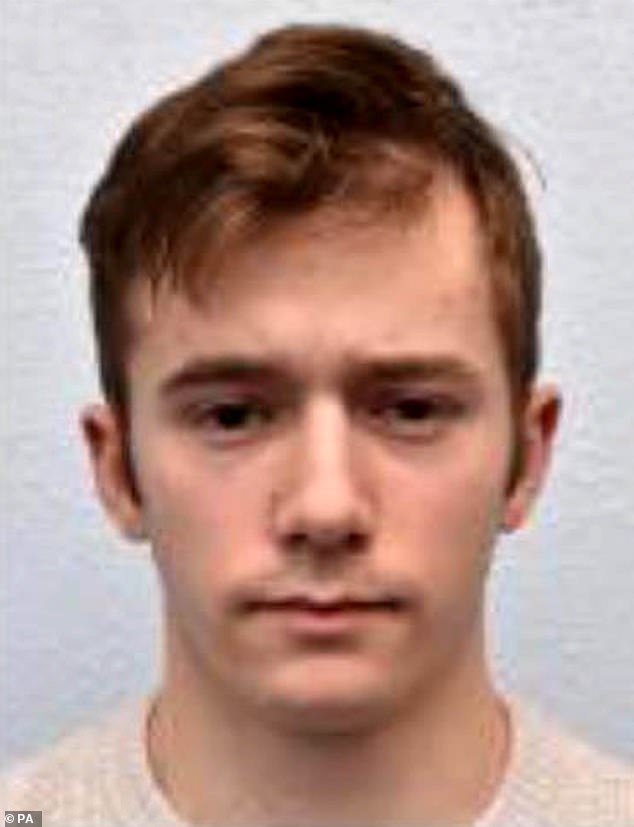 Benjamin Hannam (pictured), now 22, would later describe his excitement at the fateful first meeting with the neo-Nazi group, National Action, on March 6, 2016, writing in his diary they are ‘a good bunch of lads’ and he ‘can’t wait to get more involved’

Raised in Enfield, North London by a single mother who had to cope alone with four children after his scaffolder father left, autistic Hannam was referred to a behavioural emotional support team at an early age.

He described himself as having ‘control of the house’, telling the jury he was close to his gay grandfather and Jewish step-grandfather, but neither was able to fill the void left by his father.

His intolerant views became quickly apparent when he went to Winchmore School in Enfield.

History teacher Lisa Hughes recalled that during a Brexit debate, in which Hannam spoke for leaving the European Union, he made ‘inappropriate’ anti-immigration comments and ‘came across as offensive to students’.

She later refused to submit his A-level politics dissertation because of the 16-year-old’s ‘intolerant’ view of Islam.

Hannam spent three years at the sixth-form college, failing to secure pass grades in economics, history and politics. In class he raged against Marxists, and was referred to guidance adviser Hafida Zitouni.

Over the course of 15 sessions, Hannam poured his heart out, telling of his anger at being rejected by the Mauritian Muslim parents of his girlfriend. 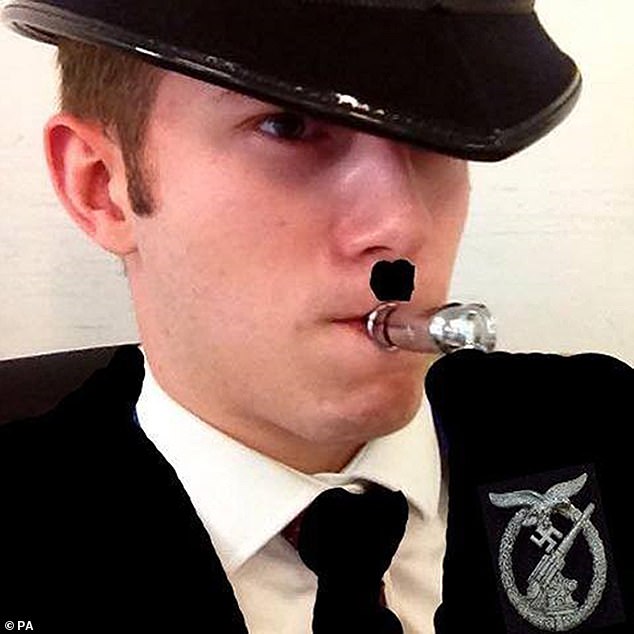 Pictured: An image found on Hannam’s iPhone showing him in a police uniform with a Hitler-style moustache superimposed on his face

He described how during their three-and-a-half-year secret relationship, her strict parents had always ‘hated’ him, even though he tried to study Islam and learnt to parrot verses of the Koran.

Frustrated and lonely, the 16-year-old drifted from studying Elvish language from the Lord of the Rings and playing Dungeons and Dragons to a darker fascination with fascism.

As his relationship faltered, Hannam began to research his girlfriend’s faith and submitted an essay to teachers on the development of ideologies, comparing National Socialism and Islam.

He said he had ‘always had a soft spot for fascism and National Socialism’ but his ‘final push’ was having to study anti-Semitism in the sixth form.

‘It wasn’t all bad,’ he told fellow extremists. ‘I did have to study Nazi racial ideology and learned a book’s worth of stuff on Adolf Hitler which I found very enjoyable.’ 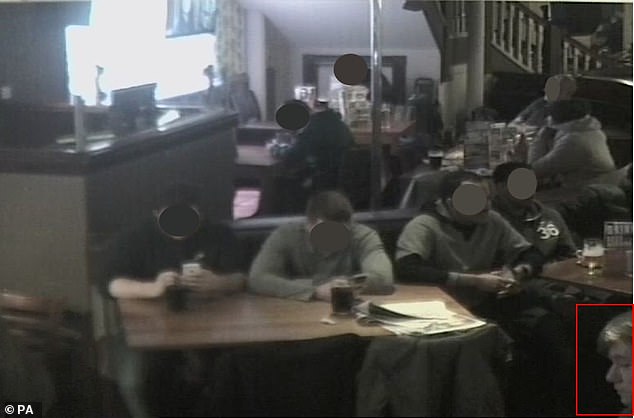 Hannam (circled) is seen at a Yates Bar in Swindon on January 15, 2017, where he met NA co-founder Alex Davies and others

Through a controversial image-sharing website, Hannam was attracted to the bold artwork and imagery of National Action, which he likened to the Star Wars soldiers known as ‘stormtroopers’.

Young, impressionable and socially awkward, Hannam was a prime target for the group who offered friendship to the lonely misfit. He told jurors: ‘For as long as I can remember I’ve struggled socially. I struggled at school.

‘I only had a very small group of friends. In secondary school my interests were fantasy like Dungeons and Dragons. I could not

discuss politics with anyone. I felt very lonely.’ He emailed the London branch of National Action after watching co-founder Benjamin Raymond saying he wanted ‘university educated young men’ on the television.

It led him to joining its London branch, meeting the group led by a figure called Ivan at the pub near Paddington.

Hannam recalled: ‘At the meeting I was really, really impressed by Ivan. Handsome, confident, intelligent. He seemed really happy I showed up. He was giving me free stuff.

‘He said, “If you want to come and hang again you have to make a post on Iron March”, a Right-wing website. 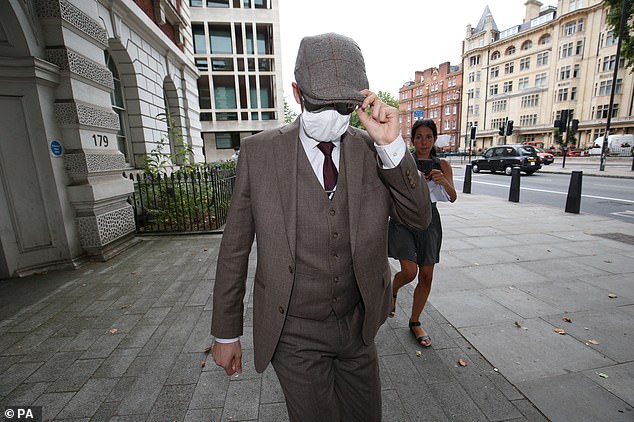 ‘Ivan just told me to do it. I thought he was really cool. I said ok.

‘He said, “Mention [National Action co-founder] Alex Davies and mention some Nazi stuff” and I thought it was just an introductory post.

‘I was desperate for his approval. I just felt he was a much cooler older guy.’

Hannam went on to attend the group’s conference in Liverpool and attended boxing events even after the group became a banned terrorist organisation. He was filmed spray painting fascist graffiti just weeks before he applied to join the Metropolitan Police in July 2017.

Even when his employers later learned the true nature of his beliefs, Hannam insisted he only joined the group to make new friends.

He said: ‘I stuck to social activities. Most of the time was going to the pub and going for walks.

‘Other times camping or going boxing. Often it was just young men meeting up getting some snacks and some food and going for a walk.’ He told jurors: ‘I felt this crushing need to go out and interact with people because I felt so lonely.

‘I had wasted so many years of my teenage life playing video games I wanted to get out and do something.’

But a glimpse into his bedroom told a different story. There, the court was told detectives found posters of Nazi soldiers on his bedroom wall, allegedly bought by his mother.

He tried to pass them off as just ‘flashy posters’ telling jurors: ‘I like bold pictures, propaganda-style pictures which is why I had some fascist propaganda stuff, it’s something about the bold colours. It’s the same as my Star Wars poster and I’ve got a Minecraft poster.’ 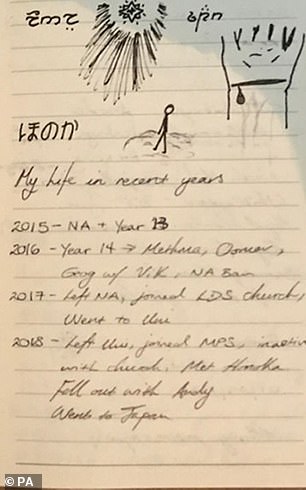 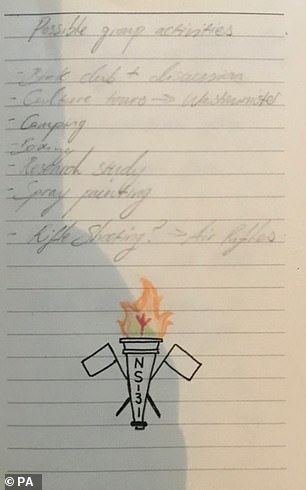 But on the book shelves were notebooks littered with sketches of Right-wing material including a flag with the phrase ‘NS131’ – another far-Right group affiliated to National Action.

Hannam had also downloaded Anders Breivik’s ‘manifesto’ on December 29, 2015. Police found selfies of Hannam in his police uniform with a moustache superimposed resembling that of Adolf Hitler’s.

Hannam idolised the Nazi leader telling a potential National Action recruit he was ‘the big man’. On his phone were also numerous neo-Nazi pictures that he had downloaded and kept even after he became a police officer.

The damning raft of material demonstrating his allegiance served to convince the jury yesterday.

But it also left Scotland Yard facing difficult questions about how on earth he managed to get through their vetting checks to become a police officer.