This is the incredible moment a sea captain fought off killer whales with a pole and screamed at them to ‘p**s off’ after they attacked his boat.

Captain Antonio Busse, 40, shouted ‘get off the f***ing boat’ as a pod of orcas surrounded his vessel in the waters of the Gibraltar Strait.

The predators had attacked the Serena IV sailing boat, leaving it without a working rudder which is used for steering, off the coast of Cape Spartel on Saturday evening. 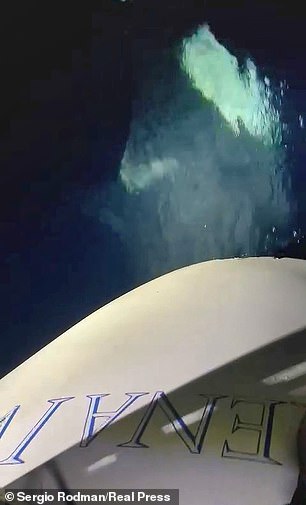 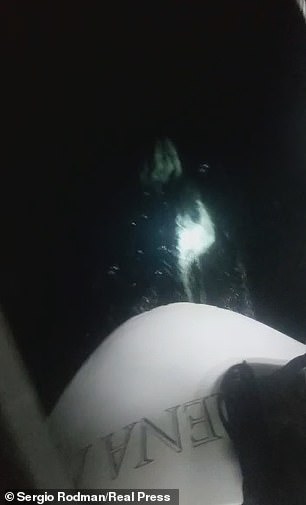 Video has captured the moment a sailing boat was attacked by a group of orcas, leaving the sea captain to react quickly to save his crew.

Busse, who said there were four killer whales, then used a small pole to hit the side of the boat to try and scare them away whilst screaming ‘mama mia’ and ‘get off the f***ing boat’.

Other crew members began throwing items into the water to get them to leave – but as they shone a light in the water, they could see they were still surrounded by the orcas.

At one point, a large killer whale can be seen swimming underneath the boat – causing the crew to shout out in fear.

In another video, the orcas can be seen circling the boat and swimming next to the boat and breaching the surface.

At this point, the captain began hitting the water with the pole in attempt to scare the predators away. 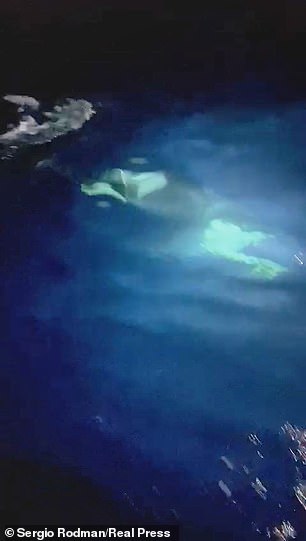 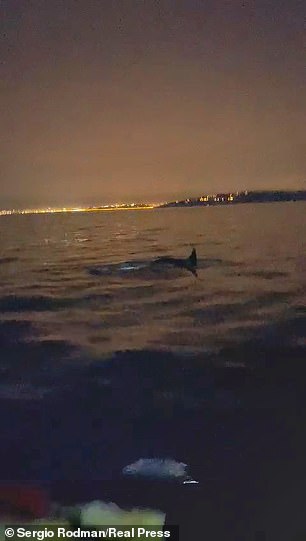 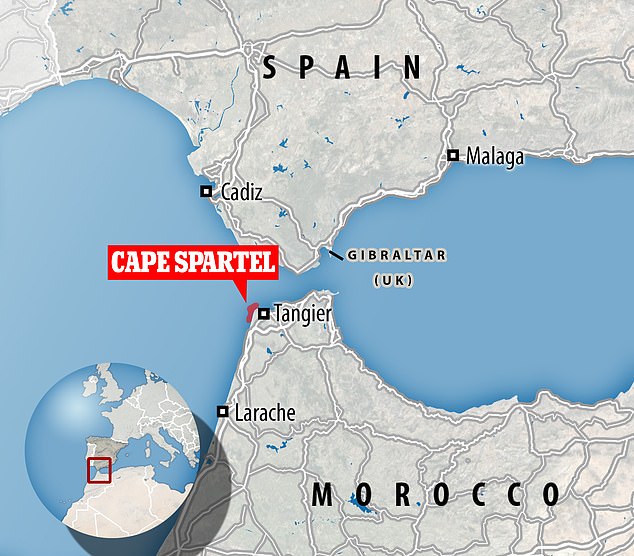 The predators had attacked the Serena IV sailing boat, leaving it without a working rudder which is used for steering, off the coast of Cape Spartel, in the Strait of Gibraltar on Saturday evening

Sergio Rodman, the owner of the vessel, said: ‘We were coming from Italy and had stopped in Gibraltar in order to go to Lanzarote in the south-western Spanish region of Canary Islands’.

He was on watch duty while the three other crew members were sleeping.

Busse, told Real Press in an exclusive interview that they heard a strange noise and rushed to the top of the ship.

It was firstly thought the vessel had hit a container, but they quickly realised that killer whales were playing around the ship instead, trying to hit it.

According to Busse, there were only four killer whales, which approached the boat. They threw items at the orcas in a bid to make them leave them alone but to no avail.

The killer whales finally managed to break the rudder after they hit it repeatedly.

As a desperate measure, one of the crew lit a flare in order to force them to leave and this strategy worked as the group of orcas finally left them in peace. 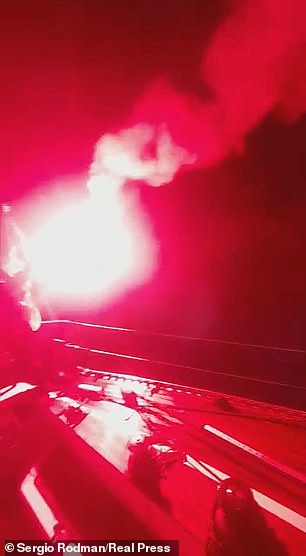 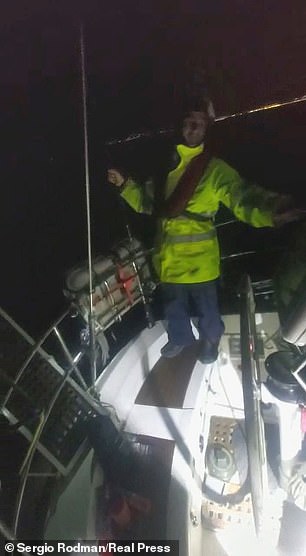 As a desperate measure, one of the crew lit a flare in order to force them to leave and this strategy worked as the group of orcas finally left them in peace

Busse added that ‘killer whales are very smart and we have been told that they even steal the tuna from the fishing boats when they are hungry, but this situation of breaking a rudder is new.’

He also said that the killer whales prefer to play around with sailing boats as the fishing boats have their rudders very close to the propellers, something that is different in sailing boats.

Despite having a partially broken rudder, the vessel was able to finally anchor in the port of Tarifa, in southern Spain, where another boat, flying an American flag and called Aniway, had been attacked two days before by a group of killer whales, but they were in a worse condition as they had a water leak on the boat.

Alfredo Lopez, a biologist and coordinator for the Study of Marine Mammals of Galicia, told Real Press: ‘They are not attacks but interactions’ as they do not intend to cause any harm.

He added: ‘It is not normal, but it has been happening on different parts of the coast of Spain in the last year.’

He said: ‘They do not want to do any damage, they have a task, they find boats and try to examine them and those interactions happens, but they do not have the intention of injuring people or attacking them.’

According to the biologist, this group of killer whales, which have not been identified due to a lack of images showing their fins and flippers, might be young individuals because ‘the adults have no time as they have specific roles in the group, taking care of the young, but the young individuals are more idle and they are reckless and are the ones with more contact with humans.’

He also explained that the group of killer whales are commonly seen in the Gibraltar Strait looking for food, but they are already in the area in the early months of the year, as May is the most common month to see them.

They commonly travel in groups and they are usually seen in the Strait and then they go up along the Portuguese coast and Galicia (in north-western Spain), until they arrive on the coast of the Basque Country.

The four people aboard the sailing boat attacked by the killer whales have worked to build a new, handmade, temporary rudder – using metal – so that they can sail to Ceuta, a Spanish enclave in North Africa, to have it properly repaired so that they can continue their trip to Lanzarote.