Kaia Gerber stepped out in athletic wear with a friend in New York City on Friday.

The Malibu native also donned matching sneakers, and she slung a small green purse over her left shoulder. 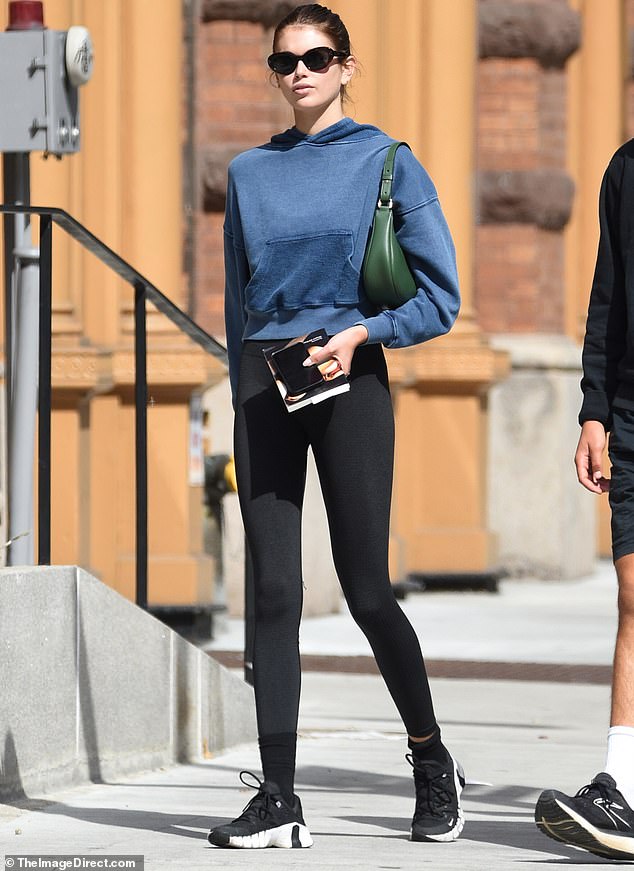 Ready for a workout: Kaia Gerber stepped out in athletic wear with a friend in New York City on Friday afternoon

Her friend wore a black sweater, athletic shorts and dark-tinted sunglasses. The two chatted as they walked.

The beauty also talked recently with Entertainment Tonight about joining the show American Horror Story, her first acting credit outside of video shorts.

‘Half of my life I’ve spent religiously watching American Horror Story,’ the daughter of Cindy Crawford said. ‘I’ve seen every season, and I know how all the different storylines connect.’ 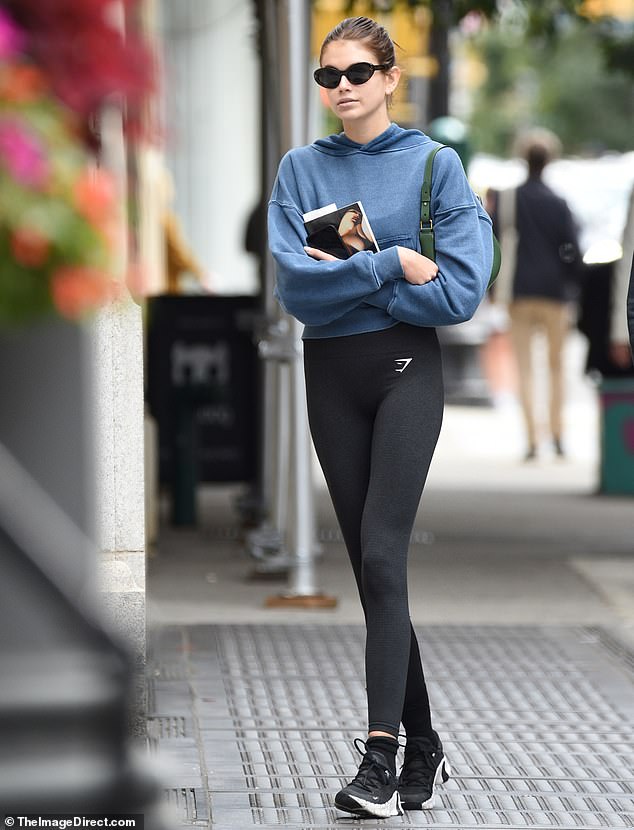 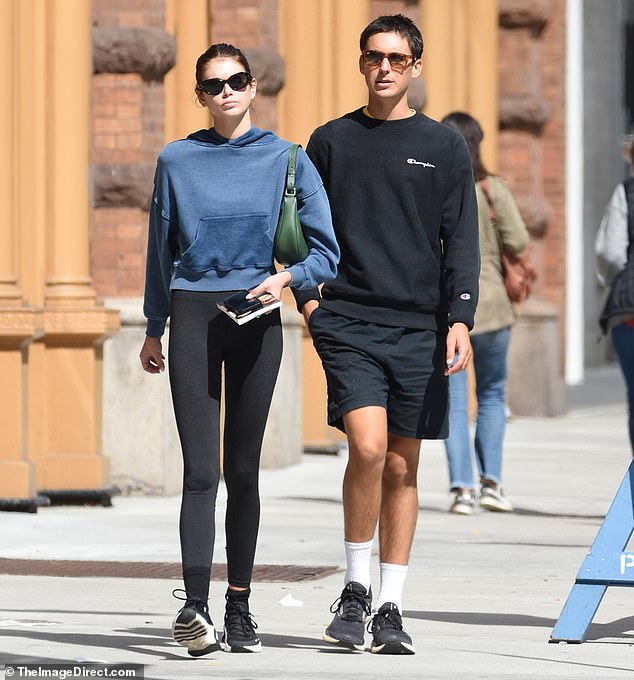 A fan of the show: Gerber said she grew up watching American Horror Story ‘religiously’

Gerber also said that her fandom of the show extended to the people who have acted on it – namely Sarah Paulson.

She said, ‘And so, when I joined the world, there was part of me that was really nervous because so many people that I look up to are solidified in this world.

‘And someone who was really wonderful was Sarah Paulson, who I felt from the time that it was announced that I was going to be in it really supported me.

‘And that was such a wonderful person to have because, to me, she’s like the queen of Ryan Murphy’s world and just such an incredible actress.’ 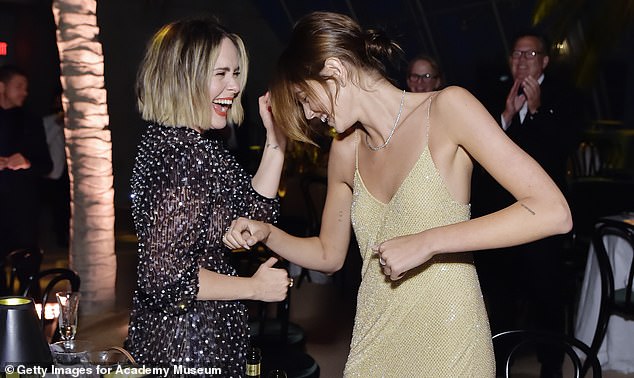 Dancing with a queen: Kaia Gerber danced with her co-star Sarah Paulson whom she called ‘the queen of Ryan Murphy’s world’ 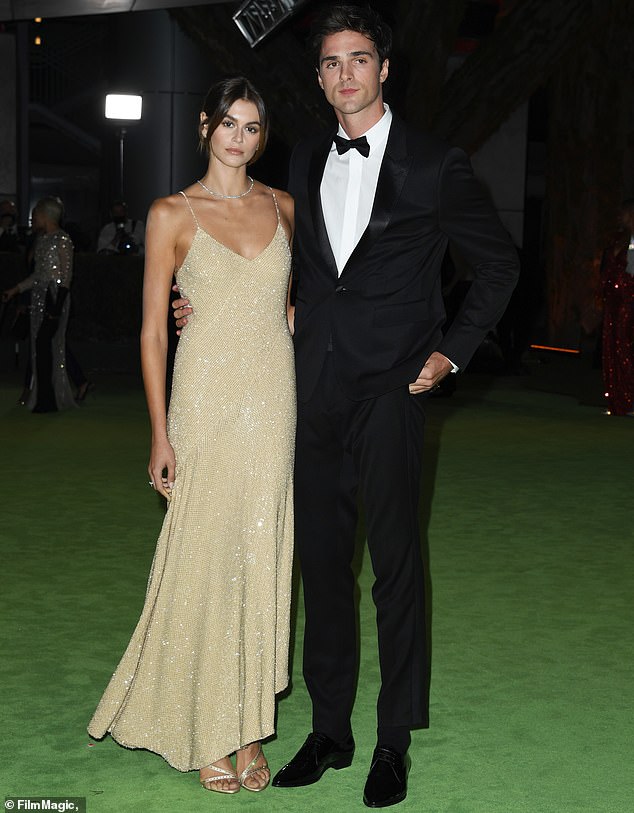 The pair were recently spotted hanging out at the Academy Museum of Motion Pictures opening gala. They laughed and danced together at the event.

Gerber also relayed to the publication that she didn’t have a connection with Ryan Murphy before she got the part, and she even had to audition for it with the help of her model mother, though the material, a scene between Gerber’s character in the American Horror Stories anthology and her onscreen lover, was a bit racy.

‘So it was, as you can imagine, a little bit uncomfortable to do with my mom,’ the star said. ‘But she was trooper and helped me a lot.’ 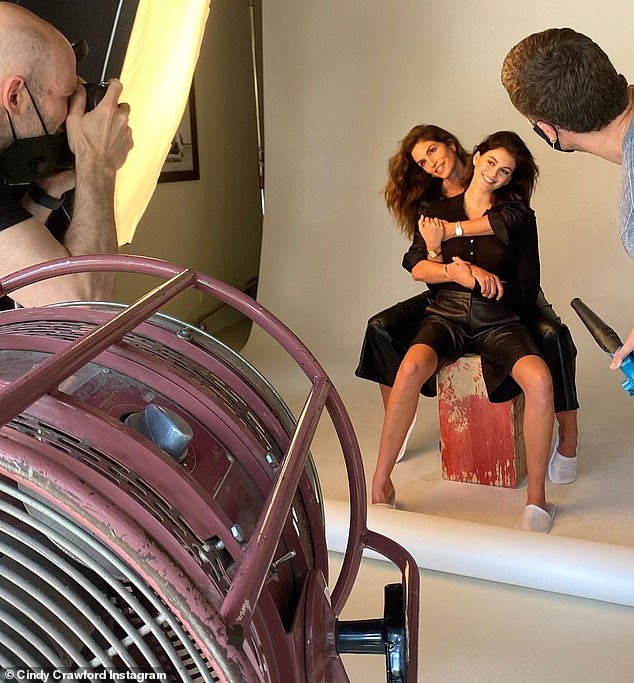 The young model had many racy scenes in the new American Horror Story series. One of them included a moment where her character, Kendall, passionately hooks up with her professor.

She said she had to prepare her parents for some of the more intense love scenes.

‘They knew what they were being subjected to. And especially my dad, I was like, “Hey, for two seconds, you might want to close your eyes,” she said. ‘But they were troopers about it.’

Gerber finished off the interview by talking about how much she enjoyed her time working on the show and said she would like to return to it.

‘I’m such a fan of everything that Ryan does. I think he’s such a genius and such a trailblazer,’ the actress said. ‘So, if he would have me back, I would gladly, gladly join them again.’