More A-list celebrities stepped out on Friday to get a glimpse at Michael Kors Spring/Summer 2022 collection during New York Fashion Week.

Kate Hudson, Hailee Steinfeld, Jane Krakowski and a handful of Victoria’s Secret models were all in attendance to support the veteran designer, while wearing a range of looks.

Additionally supermodels Gigi Hadid and Kendall Jenner were pictured arriving to the fashion show — which was held at Tavern On The Green — ahead of taking the runway.

Her blonde locks were slicked back for an additional chic touch and she added a colorful lip, while supporting her designer friend.

Steinfeld — who appeared in the designer’s 2017 campaign — followed suit in another matching dress and blazer set but in zebra print. The Dickinson star, 24, looked leggy in the wild frock and held her jacket at her side.

And Krakowski, 52, shined bright in a metallic gold trench coat inspired dress with frilled gold pumps as she posed for a few photos ahead of taking her seat.

Variety: All the attendees wore a wide range of looks as they supported the veteran designer’s latest collection 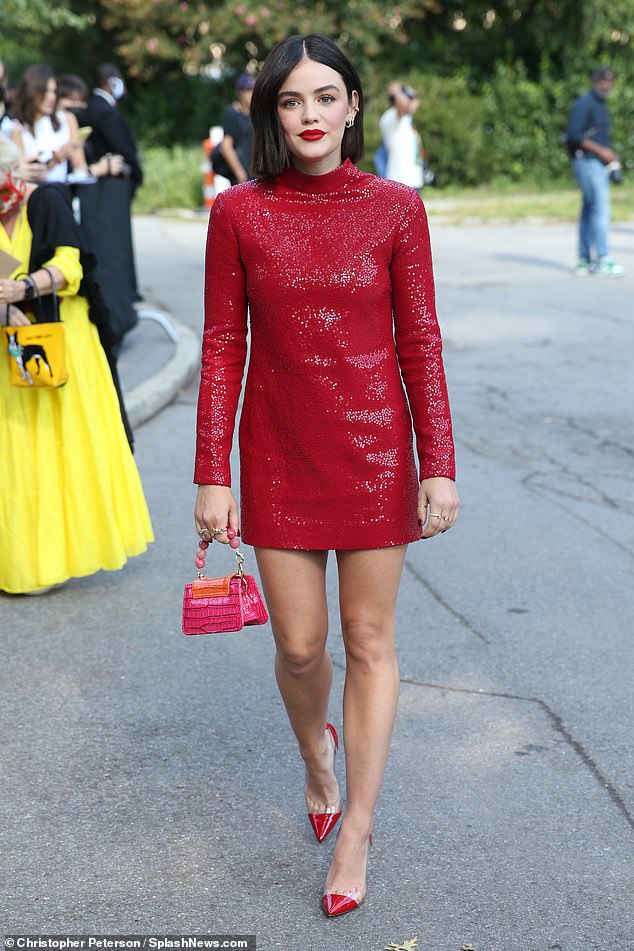 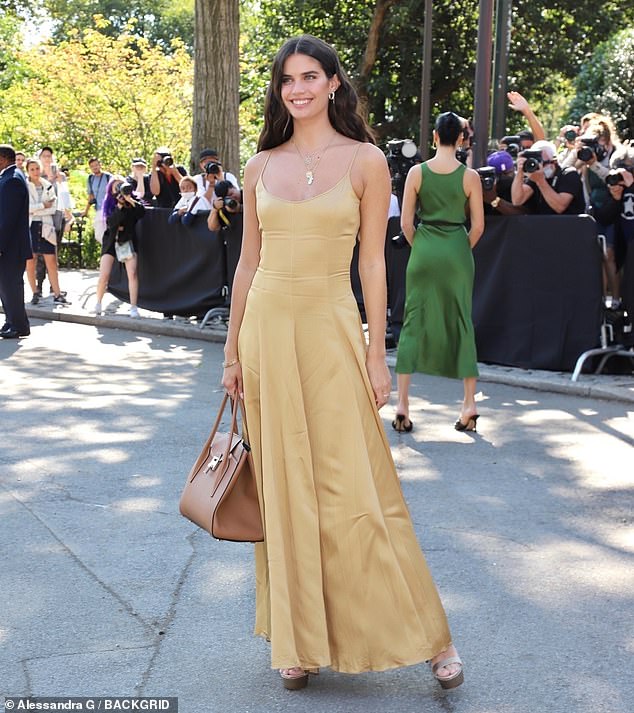 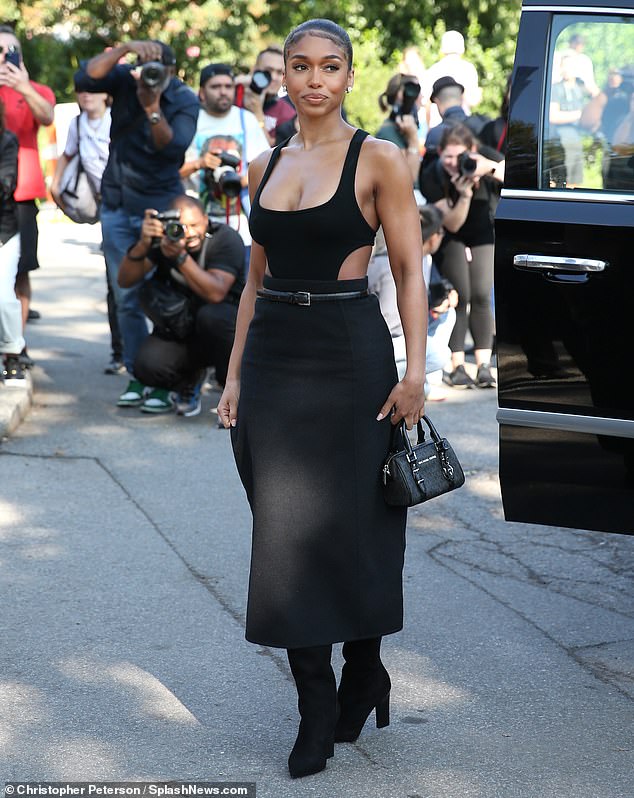 Hint of skin: Lori Harvey was seen showing a bit of skin in a bodysuit with side cutouts which she paired with a chic pencil skirt and heeled boots

New mom! Elsa Hosk looked chic in white trousers and a blouse with a snakeskin blazer

Hale was red hot in a sparkly mini dress while Shaik and Sampaio opted for slip dresses with Kors handbags, and Harvey showed a hint of skin in a black bodysuit with cutouts which she paired with a pencil skirt.

Hadid and Jenner were both seen arriving in black SUVs ahead of getting their hair and makeup done for the show.

As Gigi’s sister Bella was tapped as the face of the designer’s latest campaign, it appeared he wanted to spread the family love by giving Gigi a runway slot. 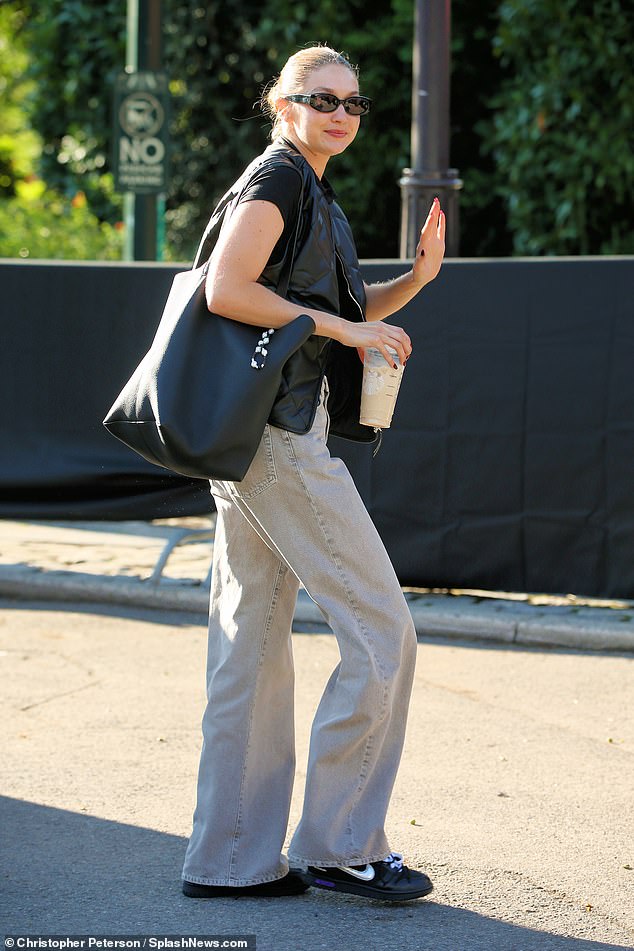 Ahead of the show! Hadid was seen arriving in a black SUV ahead of getting hair and makeup for the event

Ready to roll! The new mom has been modeling up a storm during fashion week 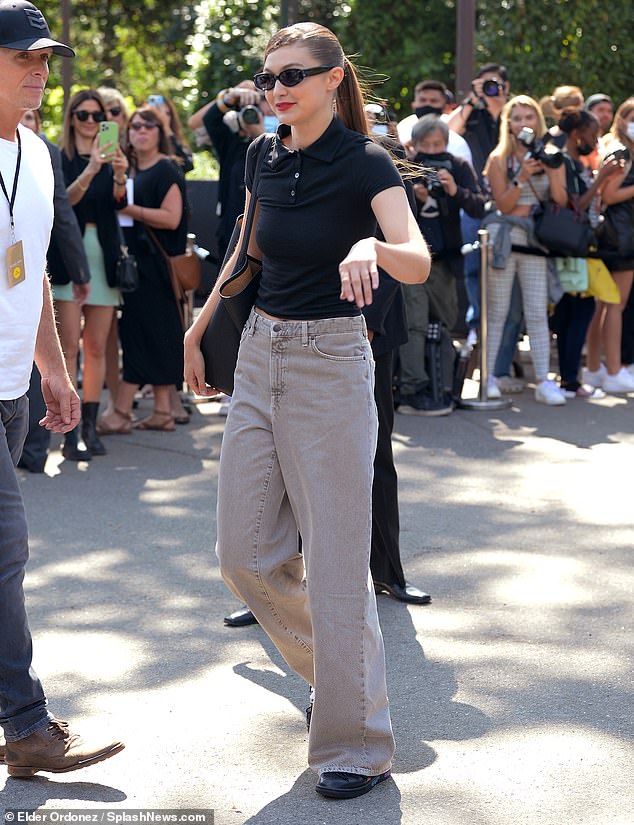 Show look: Her runway glam for the event included a slicked back ponytail with a red lip.

Good to be back! The blonde beauty was in good spirits as she continued her NYFW tour de force 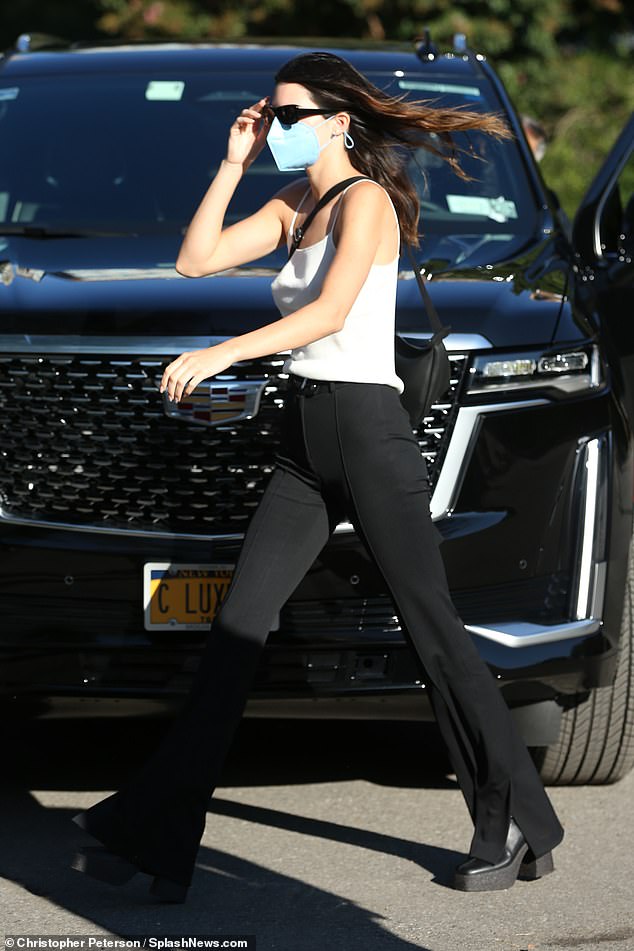 Center stage: As she head been doing promotional tours for 818 Tequila, the Kors show was her first of NYFW

Many of the models runway glam for the event included a slicked high ponytail with a red lip for a pop of color.

As Jenner was doing promotional tours for her 818 Tequila brand, the Kors show marked her NYFW debut where she was seen opening the show.

Kors show was monumental in that he celebrated 40 years in the industry this year. ‘I never could have imagined having my own stores in so many different countries around the world,’ he had said in an interview reflecting on his career.

In an Instagram video he revealed that the theme of the collection was ‘urban romance’ and shared that one of his favorite performers would be performing at the event. 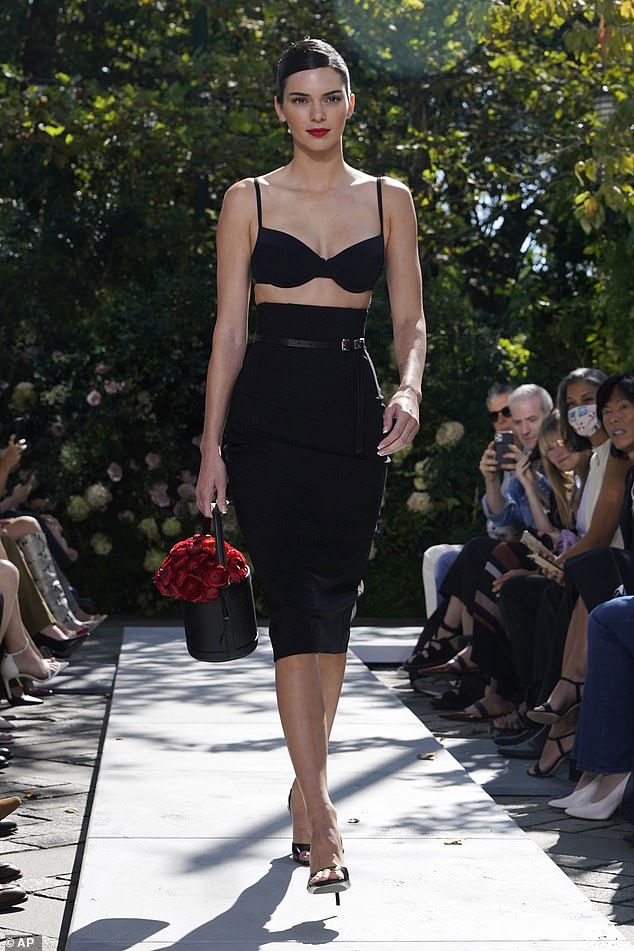 With a bang! Kendall walked down the runway to a cover of Nina Simone’s Baby Just Cares For Me

Opening the show: Kendall was seen walking down the runway in a black bra with a chic pencil skirt 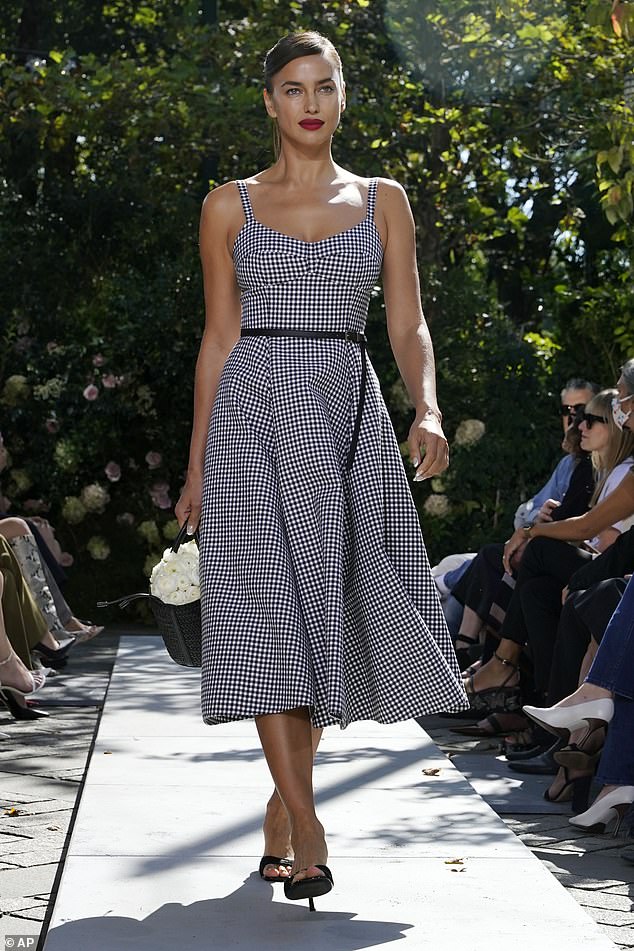 Gingham: Kors had teased that the theme of his collection was ‘urban romance’ and that there would be a mix of leather, lace and gingham garments

Closing the show: Gigi was the first to come out at the end wearing a sequin halter dress

He also teased that based on his love of ‘gingham, leather and lace,’ all would be featured in the new collection.

Kendall’s chic first look included a black bra with a pencil skirt and she carried a bucket bag full of roses.

And as Kors had promised, Irina Shayk was seen walking down the runway in a gingham dress while carrying a bucket bag of white roses.

Hadid seemed to close the show and her final look included a black sequin halter dress that crossed in the front.

Glamour: Attendees were seen showing off their personal style in a range of eye-catching looks 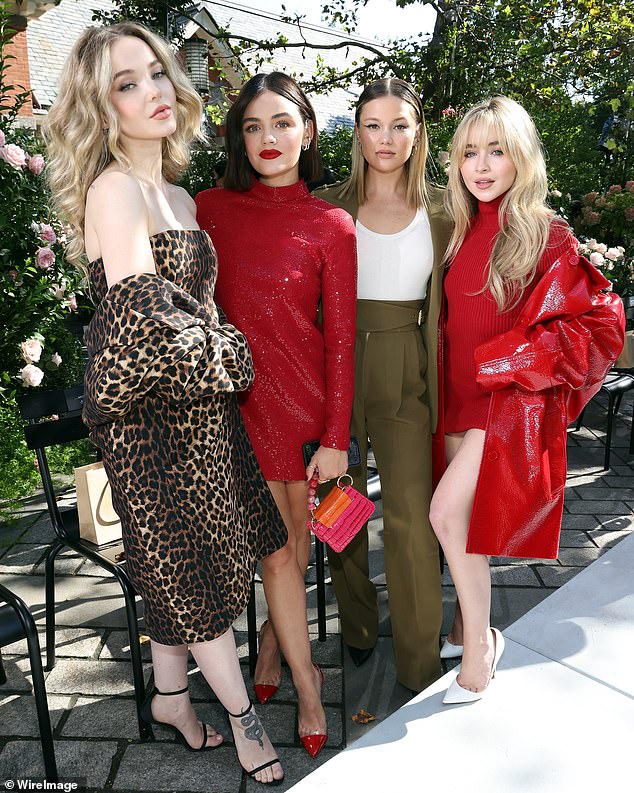 Front row: Cameron, Hale, Olivia Holt and Carpenter pictured at their seats ahead of the show

Stepping out: Hudson was seen living her NYC rental in the brown look while suited up in a face mask 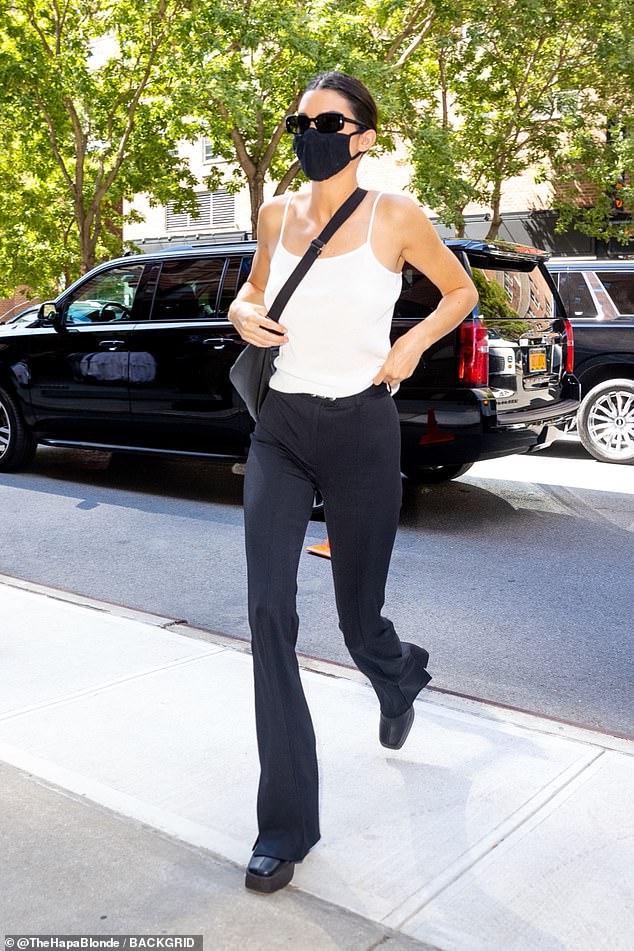 Heading home: After capping off her first show she returned home