She is never shy showing off her phenomenal physique.

And Kimberley Garner was at it again on Wednesday as she displayed her toned figure attending the opening of the new bar Mondrian Shoreditch in London.

The former Made in Chelsea star, 30, flaunted her taut abs in a sexy cut-out green crop top as she posed up a storm at the event. 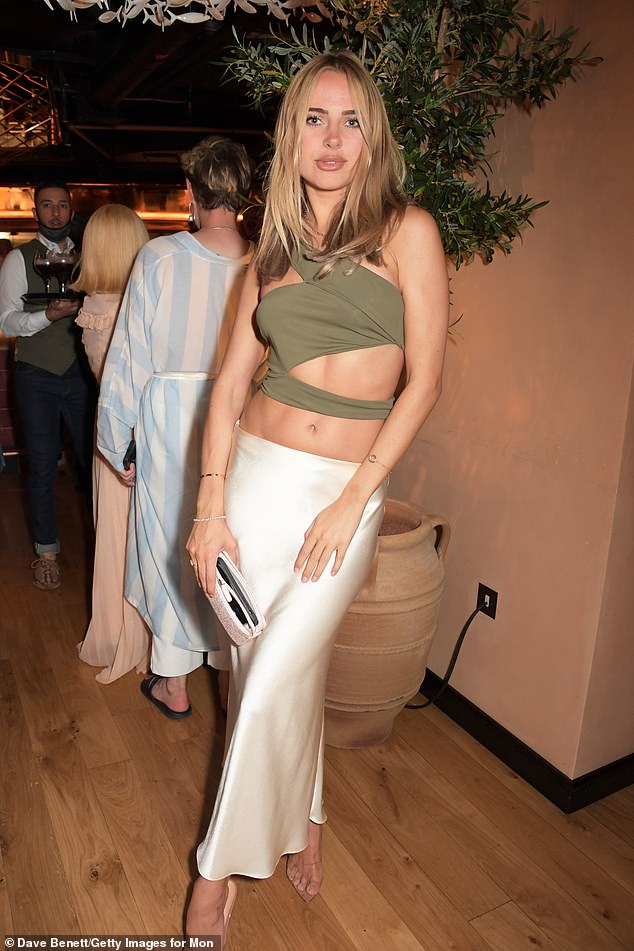 Beauty: Kimberley Garner displayed her toned figure in a green crop top as she attended the opening of the new bar Mondrian Shoreditch in London on Wednesday

She teamed the skimpy top with a silky cream skirt which she wore low on her hips to show off more of her flat stomach.

The blonde beauty completed the look with a pair of see-through heels and carried a white leather clutch bag with her.

The swimwear designer wore her light tresses in tousled waves over her shoulders and opted for a natural makeup look to show off her holiday tan. 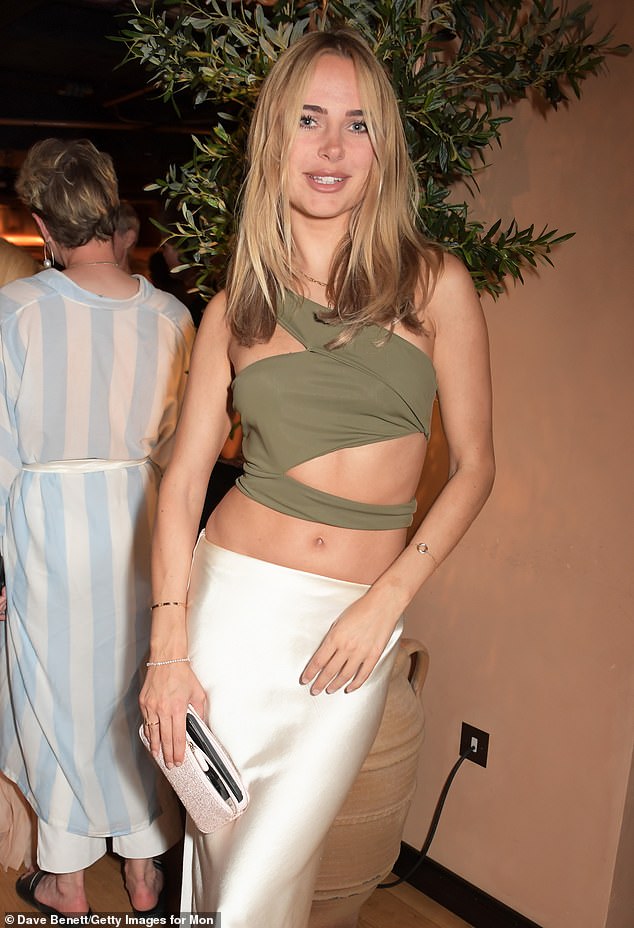 Wow! The former Made in Chelsea star flaunted her taut abs in the sexy top as she posed up a storm at the event

It comes after Kimberley showed off her svelte figure as she posed in a sheer dress during a last minute fitting for the Venice Film Festival on Monday.

The beauty went braless beneath the eye-catching garment which was covered in silver sequins to preserve her modesty.

The figure-hugging shape of the star’s BERTA frock made the most of her hourglass figure as she posed with her sunglasses in her hand for a series of snaps she posted on Instagram. 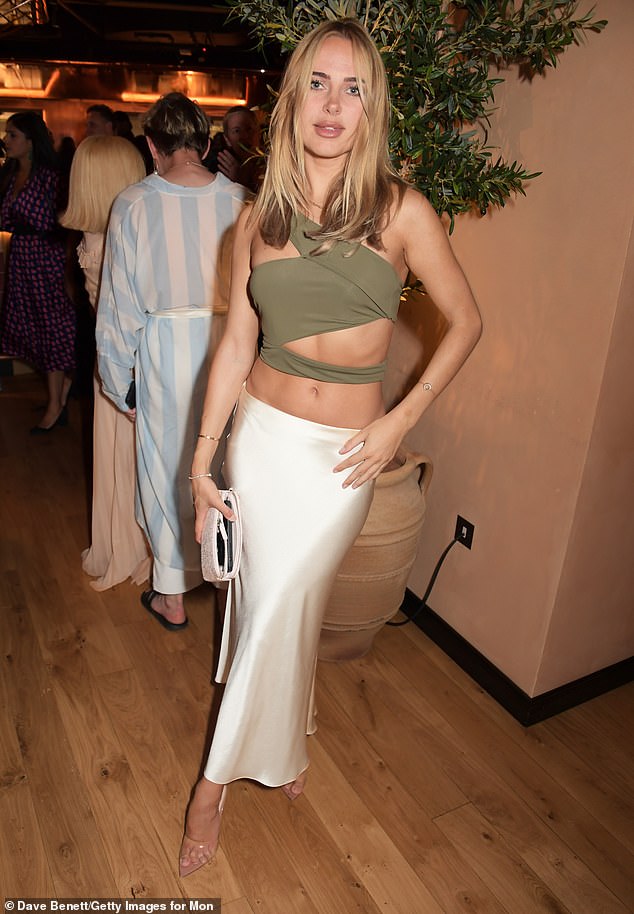 Style: She teamed the skimpy top with a silky cream skirt which she wore low on her hips to show off more of her flat stomach 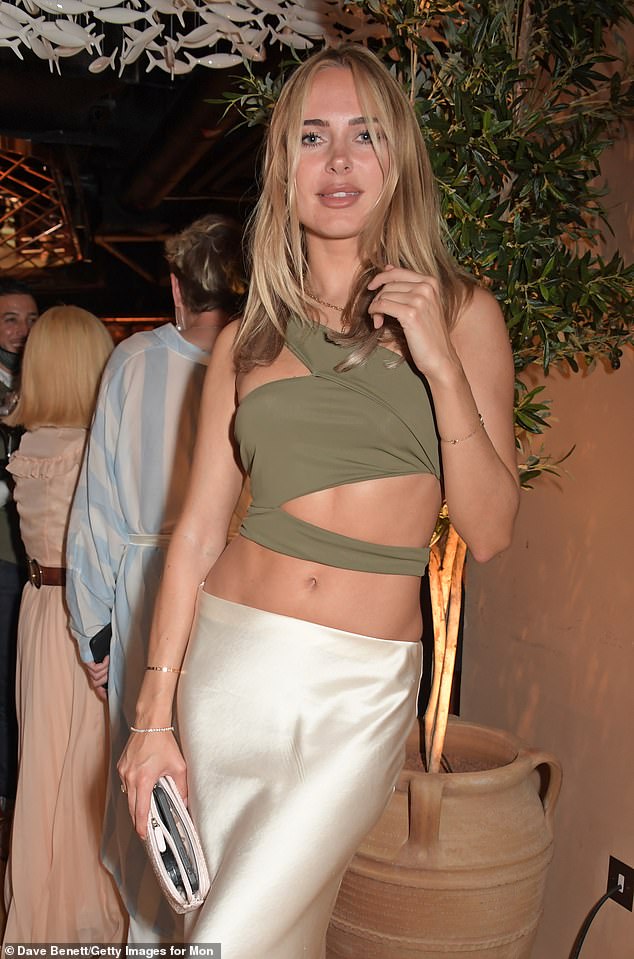 Details: The blonde beauty completed the look with a pair of see-through heels and carried a white leather clutch bag with her

Kimberley’s impressively flat stomach was noticeable beneath the see-through material, which highlighted every inch of her tanned figure,

Her blonde hair was tied back in a ponytail with some strands left hanging down to the front, framing her pretty facial features.

Sharing a slew of snaps of herself in the dress on Instagram, she wrote: ‘Gatsby/rock’n’roll – last minute fittings to Venice FF.’ 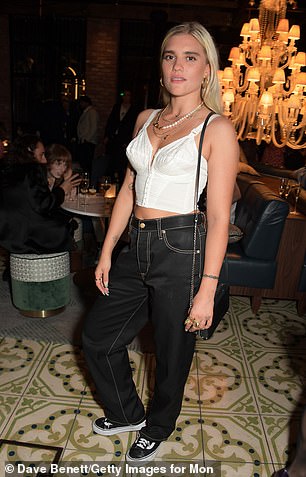 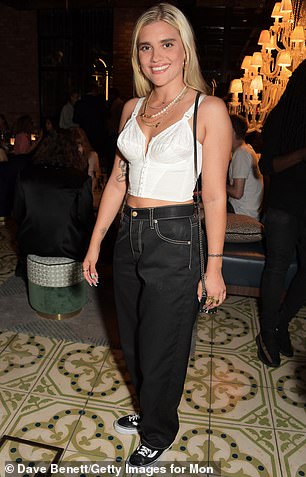 Edgy: Tigerlily Taylor showed off her sense of style in baggy jeans which she teamed with a white crop for the event 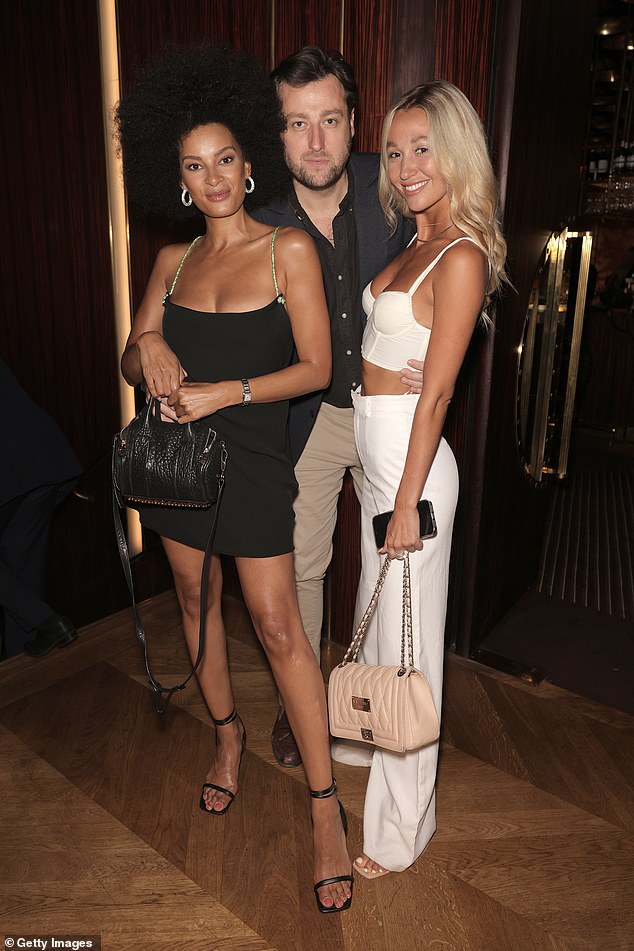 Leggy: Kelly Jade Williams (left) and Jade Mia Sexton made sure all eyes were on them at the event

Kimberley has had a busy summer posing on beaches around the world in her own designs, including during the Cannes Film Festival in France in July.

Last week she shared some snaps of herself in a black bikini as she posed on the white sandy beach of the Cap Juluca, A Belmond Hotel on the Caribbean island of Anguilla.

She could be seen wearing the dark swimwear which left her toned midriff on show.

The star posed to the side with her thigh on display, showing off her incredible figure. 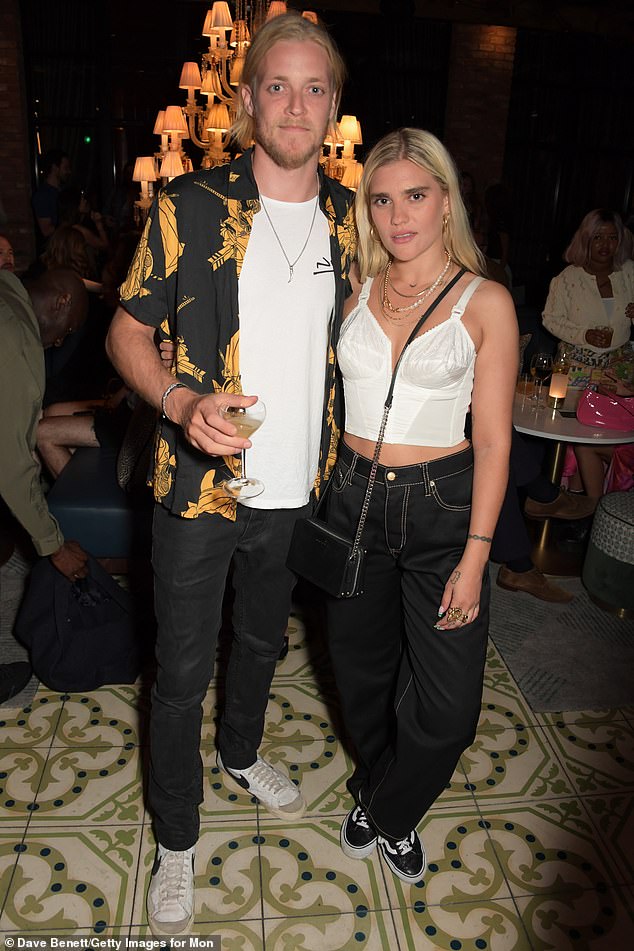 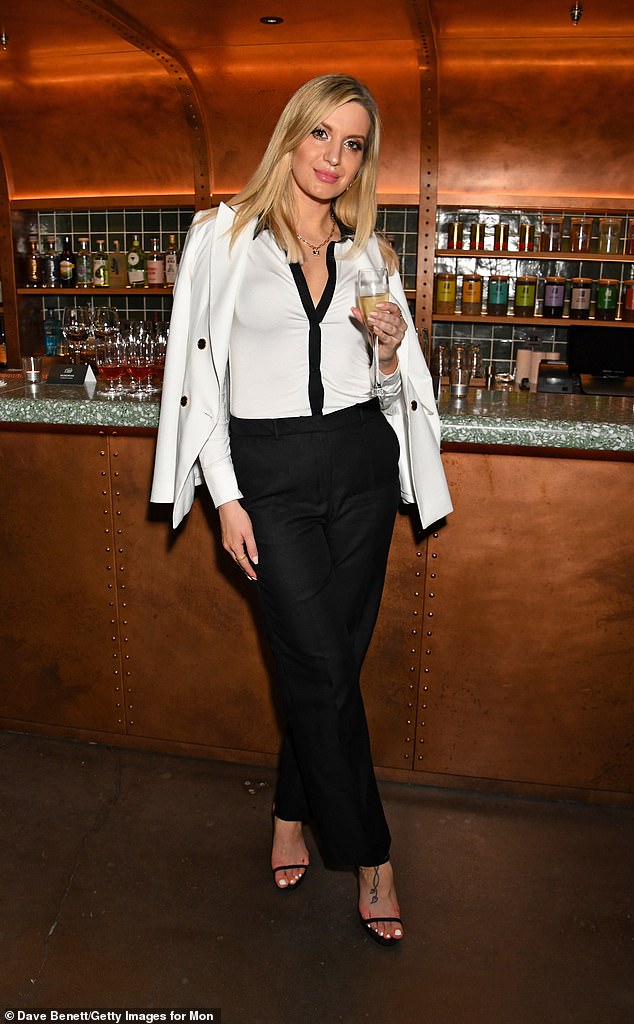 Stylish: Victoria Brown looked chic in a white blazer and black trousers as she sipped on a drink 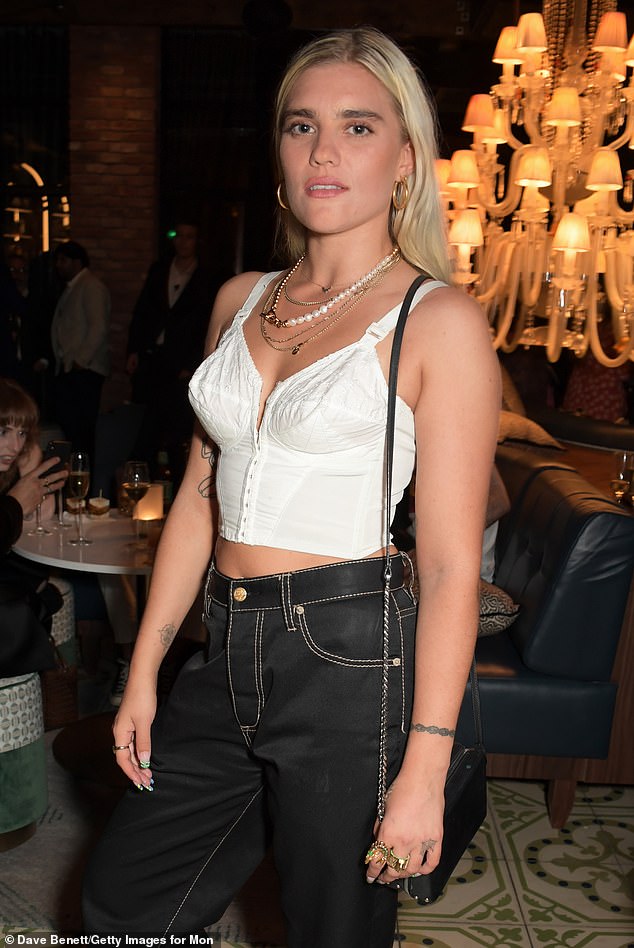 Exciting: The event featured a DJ set by Hot Chip Megamix and was attended by a host of stars

The businesswoman has enjoyed the summer with her boyfriend, who she is yet to name.

The influencer previously surprised fans when she revealed she cancelled a secret wedding and ended a long-term relationship last summer.

Speaking to MailOnline in September 2019, Kimberley confirmed she had called it quits with her former boyfriend.

The businesswoman said: ‘I ended the relationship recently. It was a really wonderful three years and we are still good friends today.’ 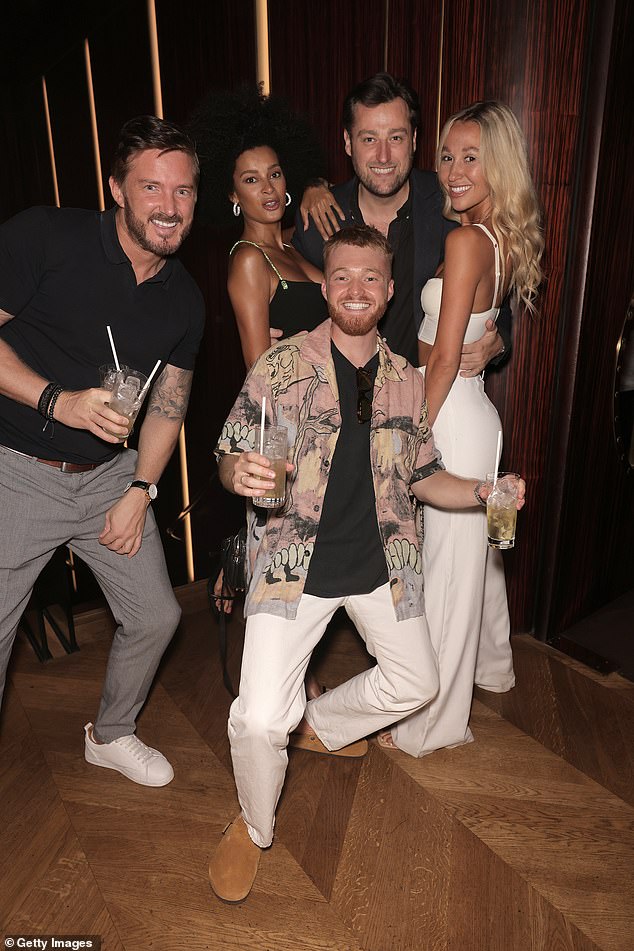 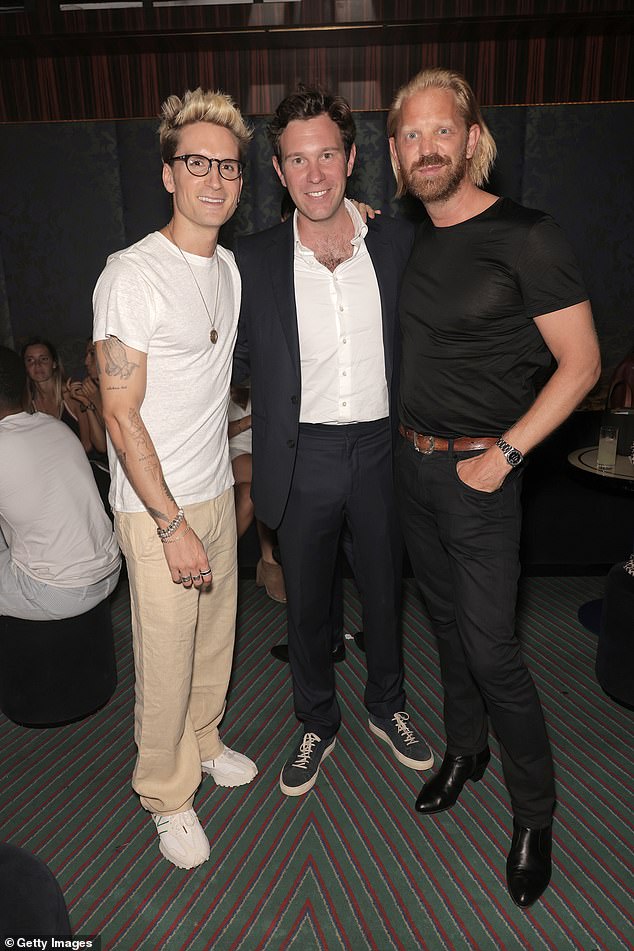 Unlikely trio: Oliver Proudlock, Jack Brooksbank – who is married to Princess Eugenie – and Alistair Guy caught up with each other at the event

Suzanne Somers and husband Alan Hamel are in the 'earliest stage'...

Suzanne Somers and husband Alan Hamel are in the 'earliest stage'...